Oh Young Soo has become the first Korean actor to be awarded individually at the Golden Globes!

On January 9, the 79th Golden Globe Awards took place in Beverley Hills, California. The Golden Globes is one of the major awards shows leading up to the Academy Awards in the United States and awards both television and film.

Oh Young Soo won Best Supporting Actor in the Television division for his role as Oh Il Nam in the hit Netflix original series “Squid Game.” He had been nominated alongside Billy Crudup and Mark Duplass in “The Morning Show,” Kieran Culkin in “Succession,” and Brett Goldstein in “Ted Lasso.” 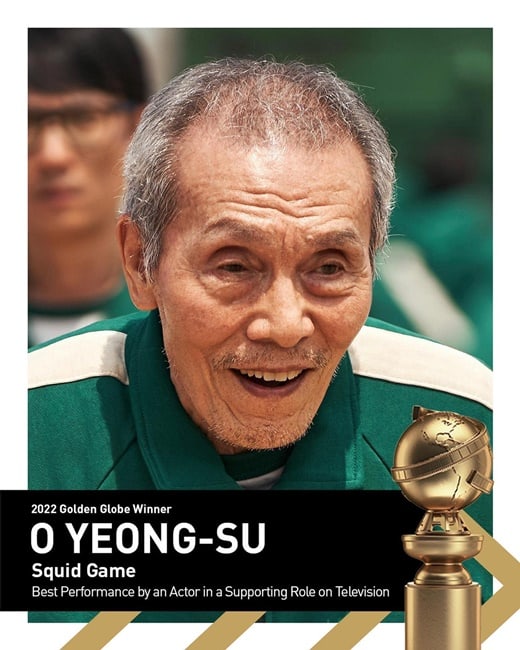 Through Netflix, Oh Young Soo stated, “After hearing the news of the award, I told myself, ‘I’m a decent guy,’ for the first time in my life.” He continued, “Now, it’s no longer ‘us within the world,’ but it’s ‘the world within us.’ While embracing the scent of our culture and while embracing the love for my family deep in my heart, I give thanks to everyone in the world. I hope you all live beautiful lives. Thank you.”

Due to Hollywood’s boycott of the Golden Globes for allegations of corruption and lack of diversity among the members of the Hollywood Foreign Press Association (HFPA), which consists of foreign film journalists from various countries around the world who chose the nominees and winners, this year’s Golden Globes was not broadcast on television or streamed online. The awards ceremony was carried out without an audience, and the winners were announced through the Golden Globes’ official homepage and social media accounts.

Congratulations to Oh Young Soo on his historic win!