“Forecasting Love and Weather” is a new drama about the passionate yet unpredictable work and love lives of people who work at the Korea Meteorological Administration, Korea’s national weather forecast service.

Park Min Young stars as general forecaster Jin Ha Kyung, an intelligent and highly organized individual who does everything by the book and is fastidious about keeping her personal and professional lives separate. Song Kang plays special reporter Lee Si Woo, a free spirit who is always thinking outside the box. Despite his impressive IQ of 150, all he cares about is the weather.

In the newly released poster, the employees of the Korea Meteorological Administration are in an elevator. From the text “The end of an office romance isn’t just a breakup,” viewers can guess that there is an ex-couple among these co-workers.

Jin Ha Kyung and Han Ki Joon (Yoon Bak), an informant of spokesperson’s office, almost got married. Now, they are ex-lovers who can run into each other in tight spaces in front of their colleagues. In the poster, Lee Si Woo gazes sweetly at Jin Ha Kyung, and she looks flustered by the unexpected romance unfolding before her. Han Ki Joon is peeking at her, as if he’s curious about what’s happening to her.

Their other co-workers look awkward and uncomfortable, making viewers laugh and empathize with the situation. Uhm Dong Han (Lee Sung Wook) is a senior forecaster who works with Jin Ha Kyung, Shin Seok Ho (Moon Tae Yoo) is a neighborhood forecaster, and Oh Myung Joo (Yoon Sa Bong) is an analysis action officer. Kim Soo Jin (Chae Seo Eun) is a short-term forecaster, while Chae Yoo Jin (Girl’s Day’s Yura) is a weather reporter who visits the Meteorological Administration more than her own workplace. Just like the weather, these characters are also unpredictable. 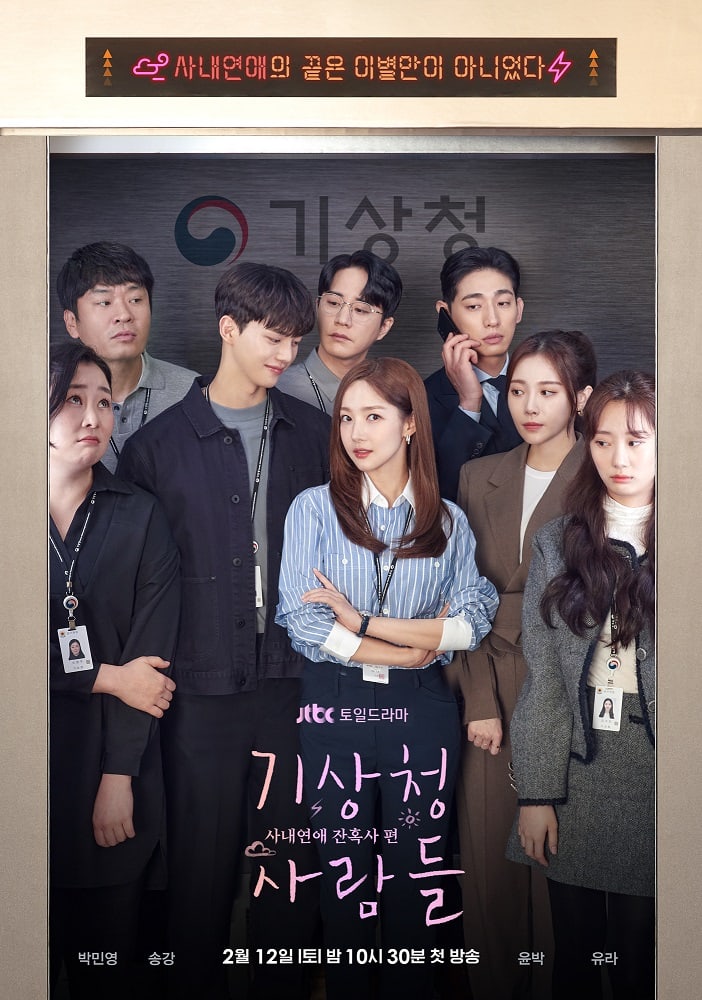 The production team stated, “The elevator poster of the Korea Meteorological Administration contains the brutality of office romance. However, it is also possible to predict the airflow of warm winds that may blow again. Please look forward to the work and love of the people at the Korea Meteorological Administration who are fiercely predicting and forecasting the weather.”

“Forecasting Love and Weather” will premiere on February 12 at 10:30 p.m. KST. Check out teasers here!

Catch Song Kang in “When the Devil Calls Your Name” below!