On January 16, Uee appeared as a special MC on the SBS variety show “My Little Old Boy.”

Uee is currently starring in the tvN drama “Ghost Doctor,” which stars Rain and Kim Bum as doctors with completely different backgrounds, skills, and personalities who end up combining bodies and spirits.

On “My Little Old Boy,” Shin Dong Yup asked Uee, “Rain is famous for being an affectionate husband, so have you never wanted to get married while seeing him interact with his wife?”

Uee answered, “Not long ago, a coffee truck in Rain’s name came to set. We thought it was obviously a fan or an acquaintance of his, but we learned that Kim Tae Hee had sent it to him. She sent it so simply and without making it obvious that we didn’t know. If my husband was an actor and I sent him a coffee truck, I would put my face on it clearly. But Kim Tae Hee kept it really simple. When I saw that, I was really envious.” 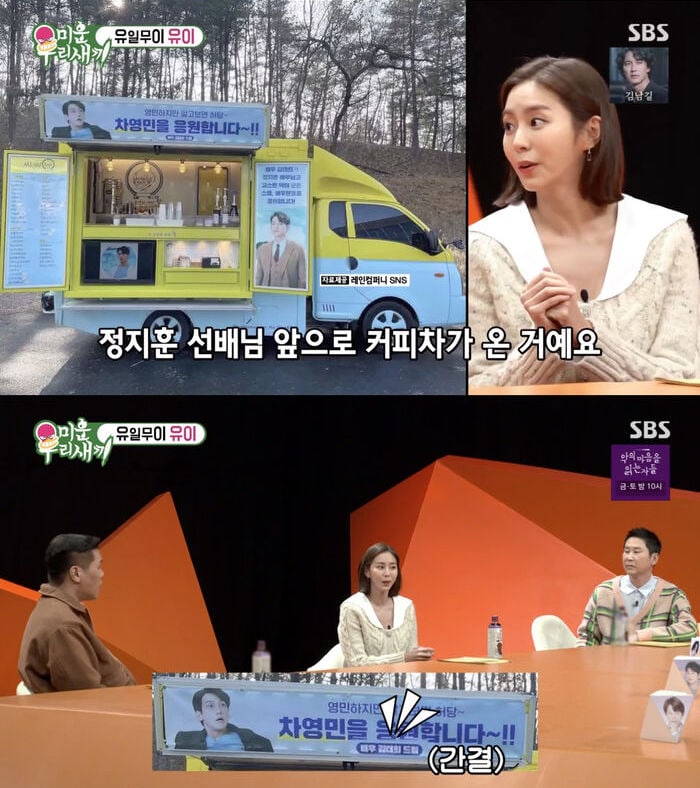 When she saw Super Junior’s Kim Heechul taking a family photo with his pet dog on the show, she remarked, “I understand how he feels. I also did a family photo shoot with my dogs. I very naturally refer to myself as my dogs’ mom. Even when I call the vet, I say, ‘This is Yooroong and Mango’s mom. I also often think of my dogs as geniuses.” 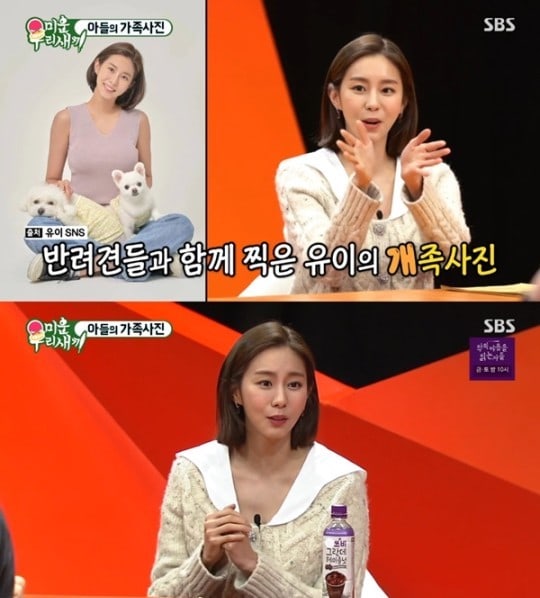 Uee shared that she has a knack for getting friendly with people and said that she once went on a family trip with actress Lee Yo Won. “We did a drama together, and her daughter was entering high school,” she said. “I was friendly with her daughter, so when she said she was on a trip, I said, ‘Tell your mom that I want to come too’ and I went.” She added, “I’m the type to talk to the senior actors who play my parents in dramas like, ‘This is Uee, who plays your daughter. Have you eaten?'”

Uee also said that her older sister had been more popular than she was when they were young. “She was way more popular,” she said. “It even hurt my pride. We went to the same high school, and she was three years older than me. As she graduated, I joined the school. She was the vice-president, was popular among students, and was good at studying. After she graduated, some of the older students would come around to look at me and say, ‘Are you Yuna’s sister?'”

Kim Tae Hee
Rain
Uee
My Little Old Boy
How does this article make you feel?