Han So Hee Shares How “My Name” Impacted Her, What She Likes Most About Herself, Her Greatest Inspirations, And More

The latest edition of Allure magazine features Han So Hee!

Following her bold and charismatic photo shoot, Han So Hee was interviewed about her past and upcoming roles, how she views herself, who inspires her, and more.

At the start, the interviewer mentioned how everyone around them had expressed jealousy that they got to meet Han So Hee. The actress expressed surprise and commented, “It’s not that I had a goal but after pursuing the enjoyable work that I liked, I’ve now turned 29 years old [by Korean reckoning]. Having people [of the general public] like me is something that happened suddenly so I feel a lot of pressure and cannot only be excited because I have to develop something to live up to that.”

Han So Hee also explained that contrary to popular belief, she has not received an extraordinary number of casting offers. She shared, “Honestly, even if there are projects that suit my appearance, I don’t think I have the face to do all types of roles. Breaking out of that is also homework for me. Now, I’m luckily receiving projects that suit me.” 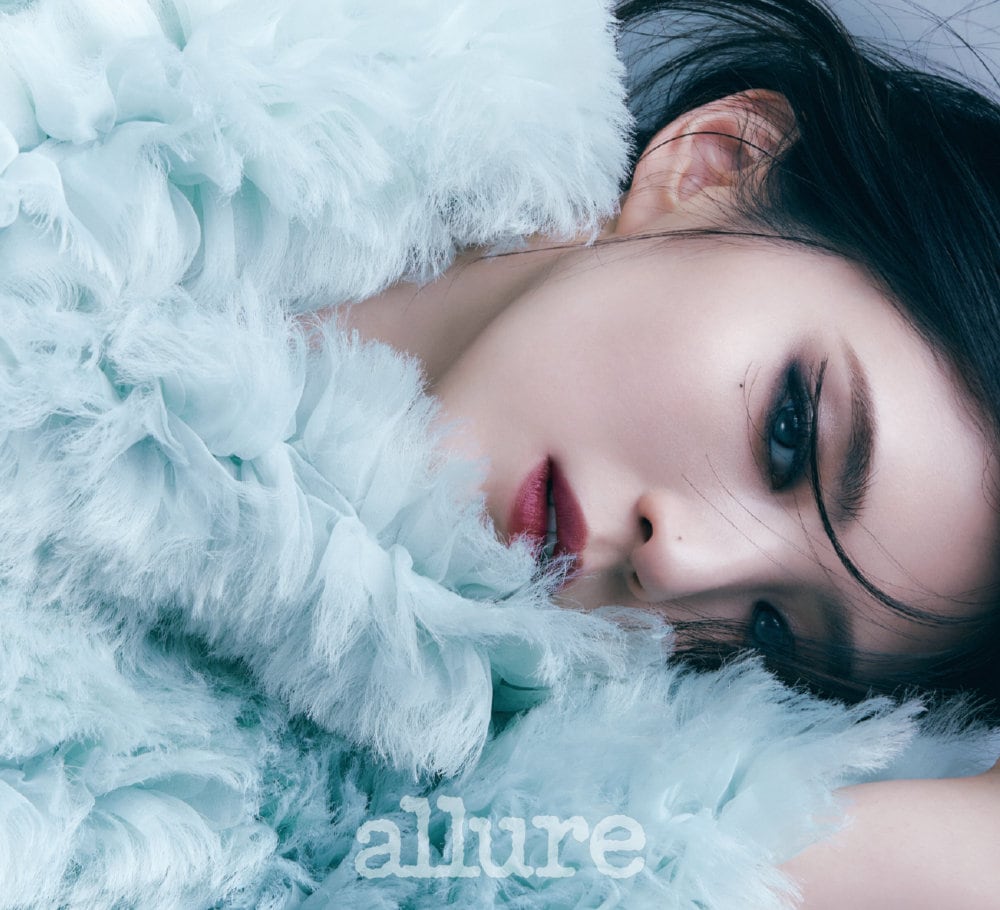 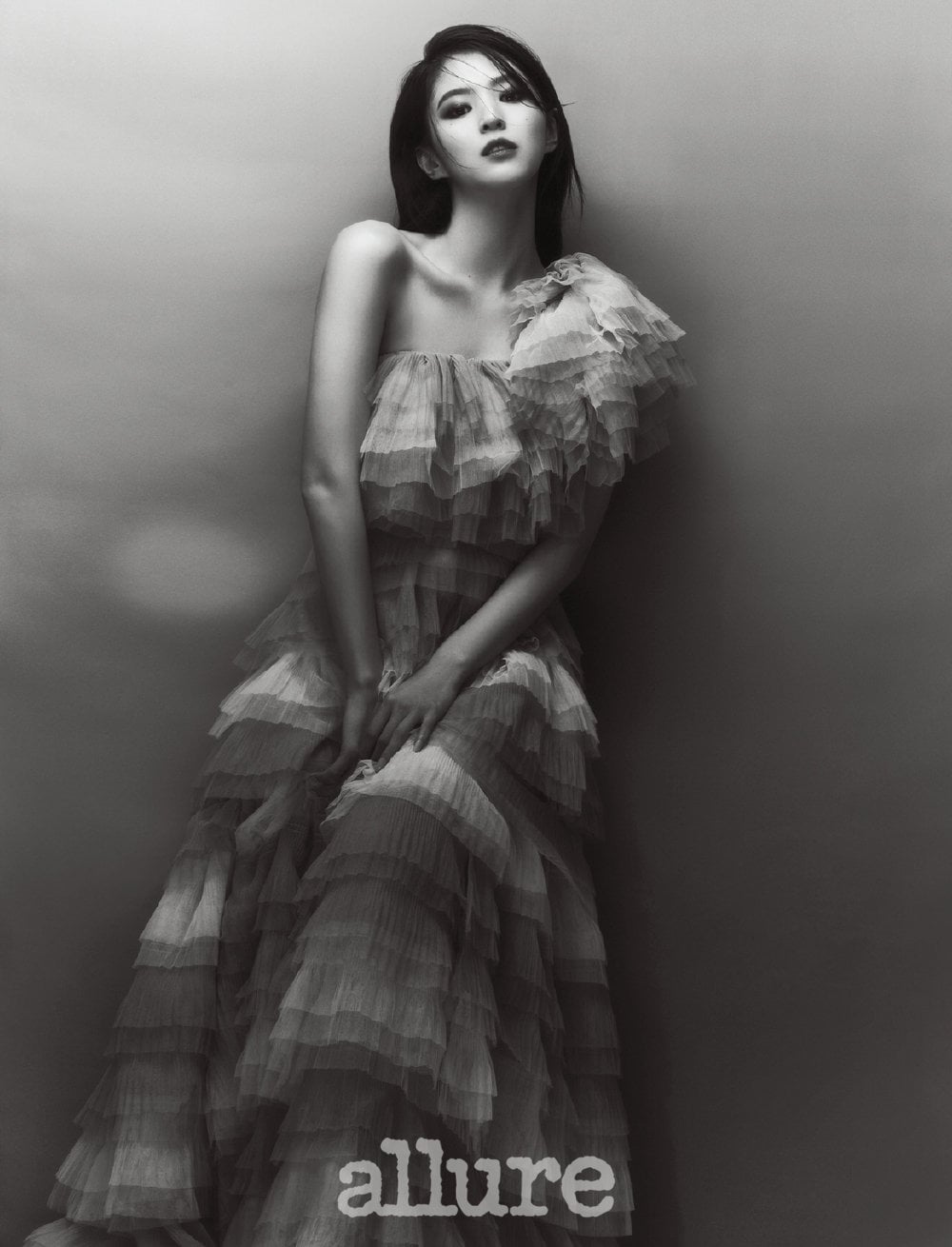 For her role in “My Name,” Han So Hee underwent extensive physical training and exercise for her action scenes. She revealed that those habits stuck with her even after the drama ended, saying, “‘My Name’ definitely had a lot of influence on my life pattern. In the past, I focused on food-oriented diets as opposed to exercise but I learned this time that working out can be a mode of stress relief. After that, I realized exercise was something I had to do and my outlook changed entirely.”

Han So Hee’s next project is “Soundtrack #1,” a romance music drama where she stars alongside Park Hyung Sik. She commented, “As [my character] is a lyricist, I don’t sing, but while filming, I listened to a lot of good songs that would be used as the OST. All the songs were so sad and seeing how much a song changed once lyrics were added was such a fascinating experience. Since it’s a short drama that has to do with the feelings of your first love, it will be good to reminisce [through]. They did say it would premiere in the first half of the year but when I sent [the director] a text yesterday, they said they were editing.”

When asked why she thinks people are drawn to her, Han So Hee replied with a laugh, “I’m on the shy side. Despite that, I try to express myself honestly and I think my fans like that I convey my emotions without a filter. It’s like they recognize it as one of my colors. I think they view me wondering, ‘Who exactly is this person? Why are they like that?’ and to me, that is positive attention. I want to live youthfully while wearing, eating, and expressing what I like. As long as I don’t stray away from what’s ethical and moral, I want to live while expressing myself freely. Instead of being passive, I hope others also find their own spark and color to shine.” 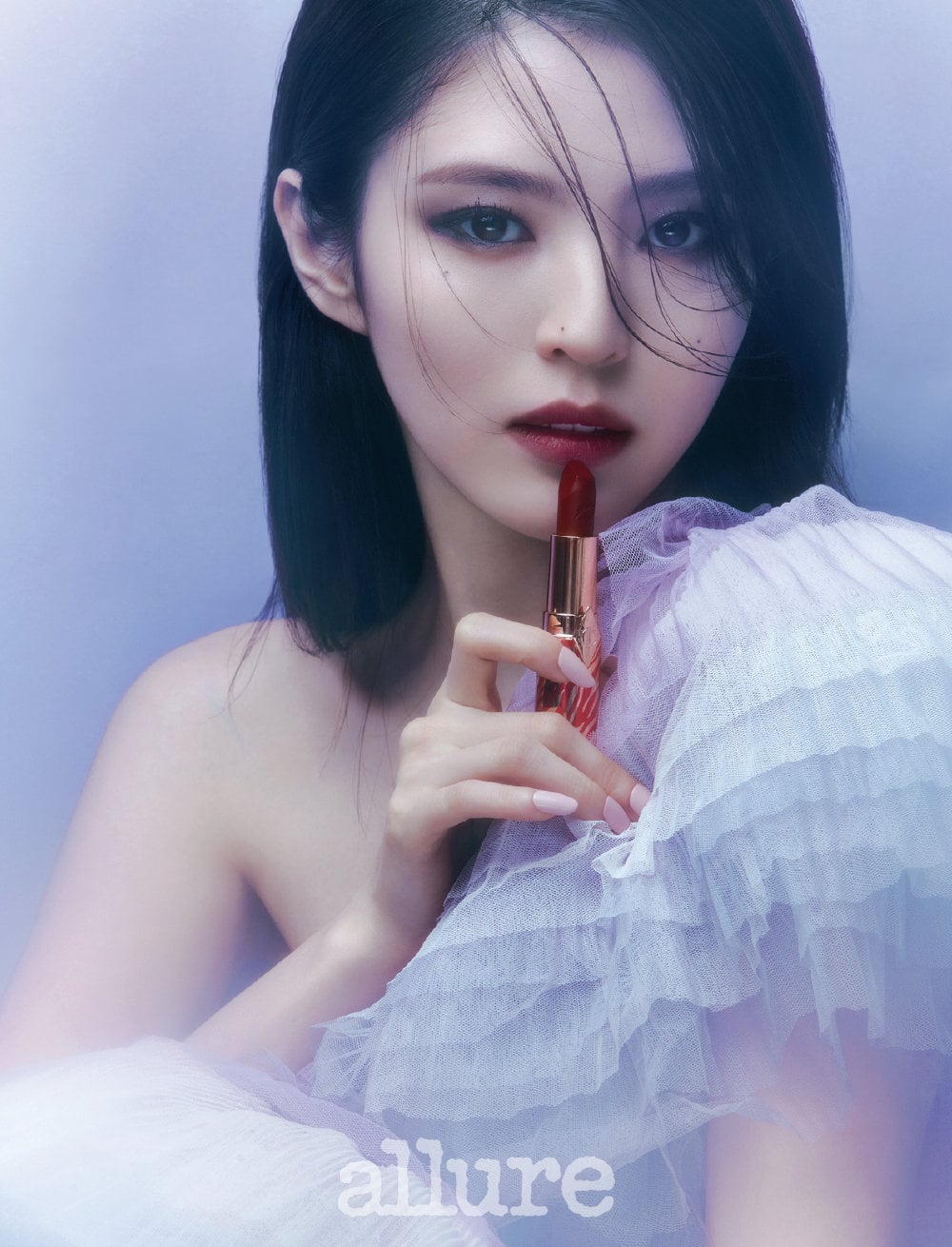 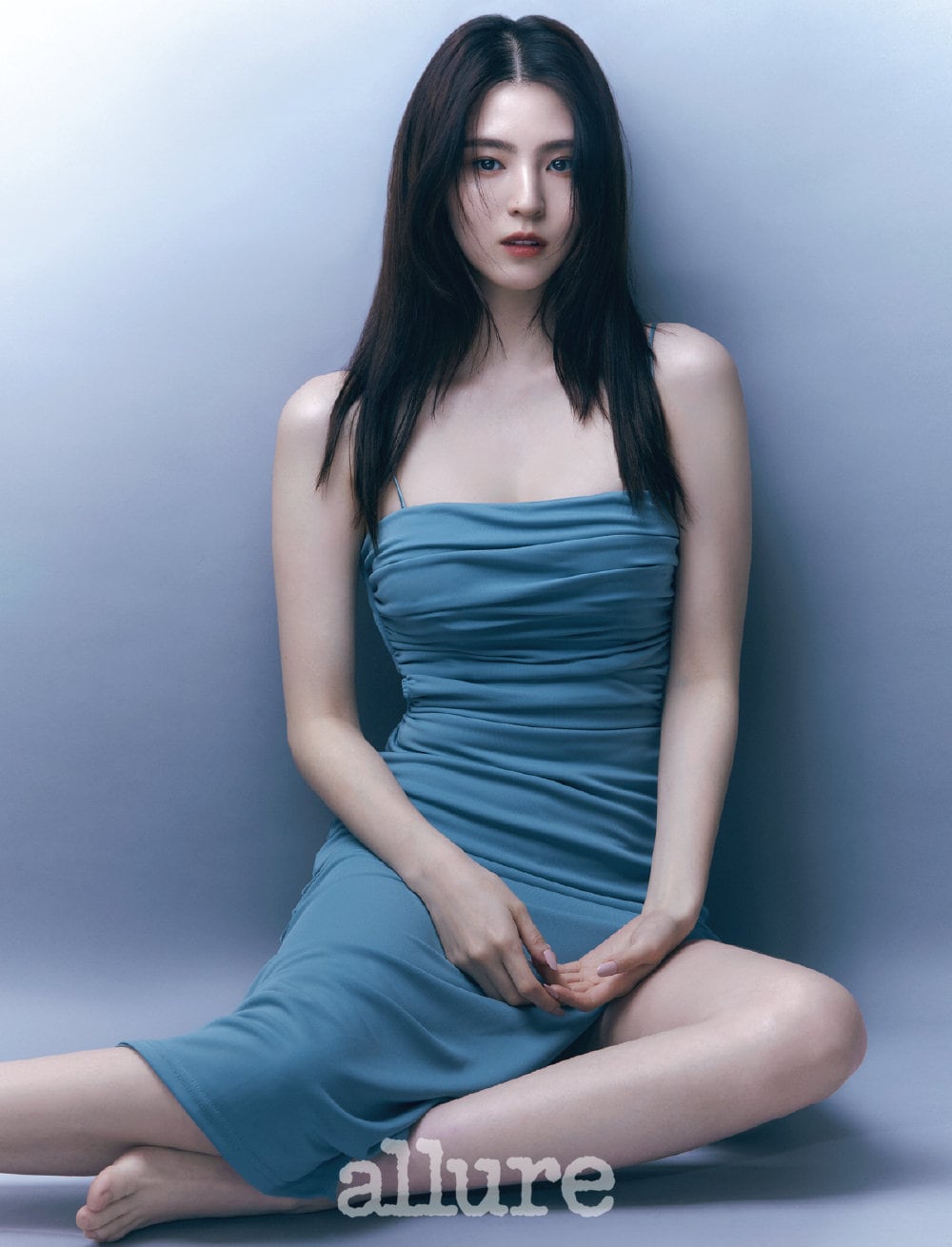 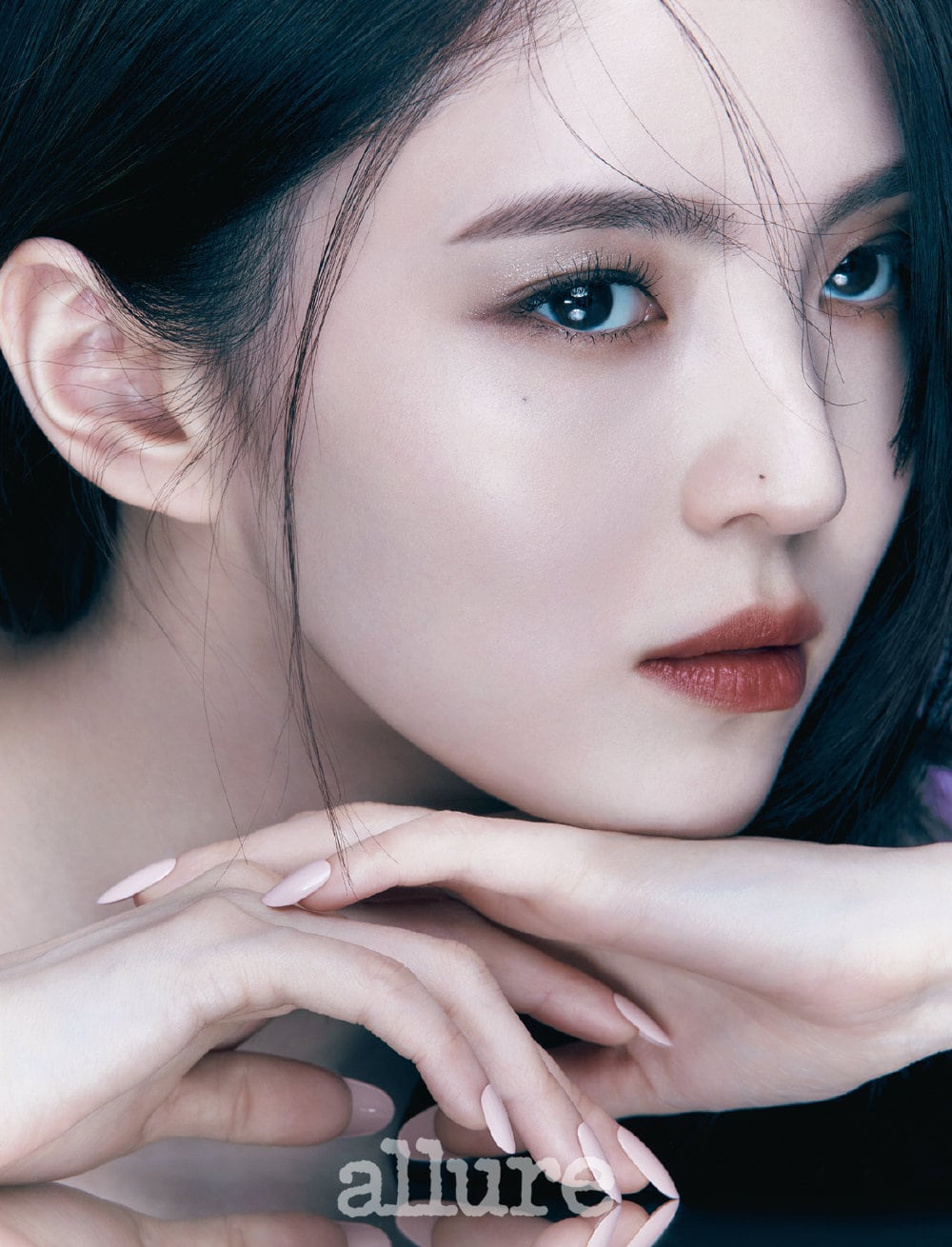 The interviewer asked what she liked most about her inner self and Han So Hee responded, “Wow, that’s a really hard question.” She continued with a laugh, “That I’m a bit stubborn. For others, this could be a weakness and I could appear impolite at times, but ever since I was young, I had a personality where I would never do anything I didn’t want to do. Anything I think I can’t do, I really can’t do. However, I think this personality is how I quickly found my own color. If I get hooked on something, I’m the type to do it no matter what anyone around me says. That’s one of the things I like about myself.”

As many fans refer to Han So Hee as a “cool unni,” the star was asked what kind of person is cool and impressive to her. She shared, “There are so many cool unnis. I think people who live their life doing what they want are cool. If you think about it realistically, being told to do what you’re drawn to can sound reckless. That’s why my heart feels kind of heavy whenever I say stuff like this. However, since you only live one life, I want people to live while doing what they want. These days, I think people like that are the coolest.”

Han So Hee alluded to the dancers of “Street Woman Fighter” as people who fit this category and added, “Like teacher Monika. Before my debut, I sought her out. I went to Hongdae, but I wasn’t able to take a class because the teacher was busy. [The dancers] are people who have done only dance for a long time but after seeing them in the spotlight [with ‘Street Woman Fighter’], I thought that they were really cool.” 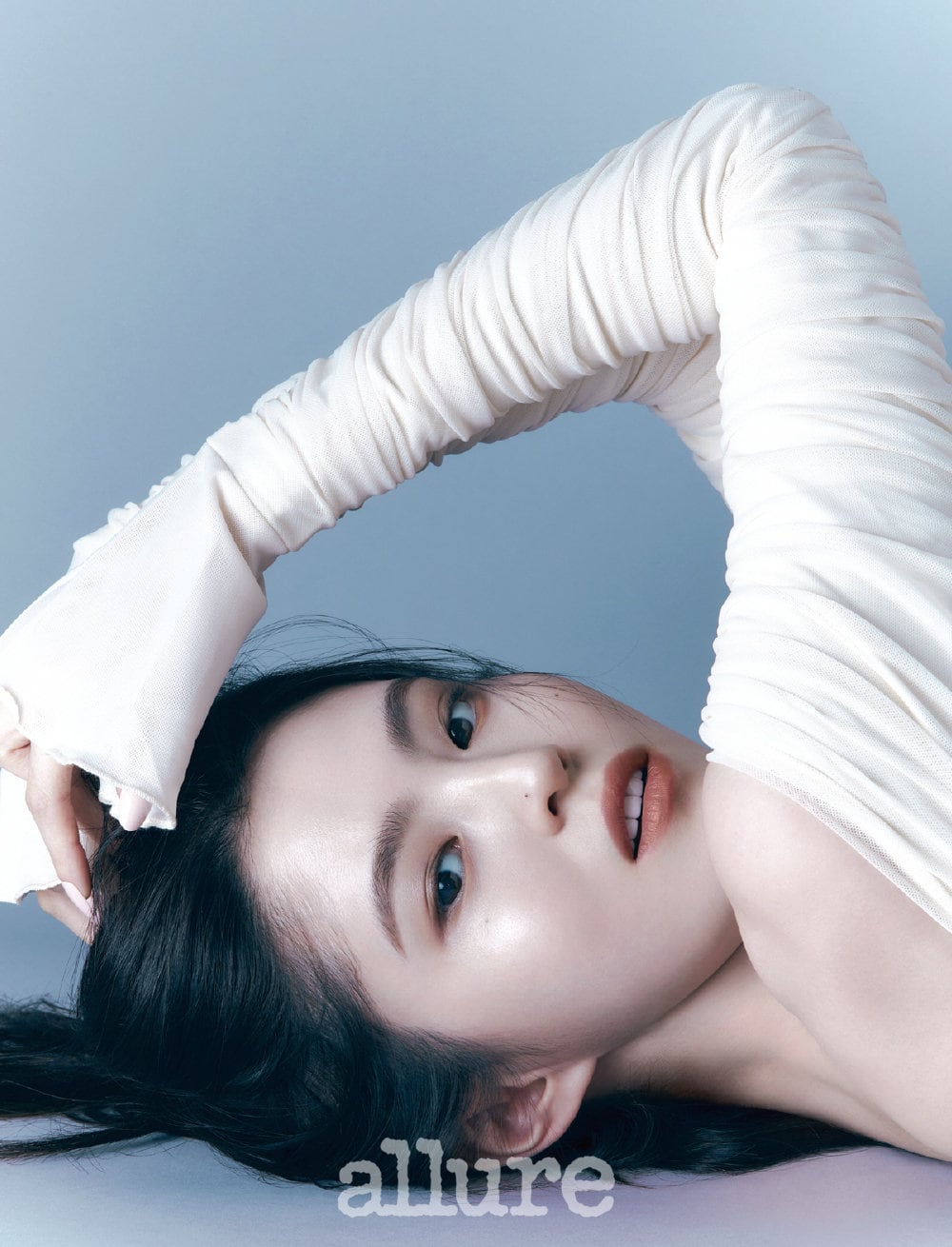 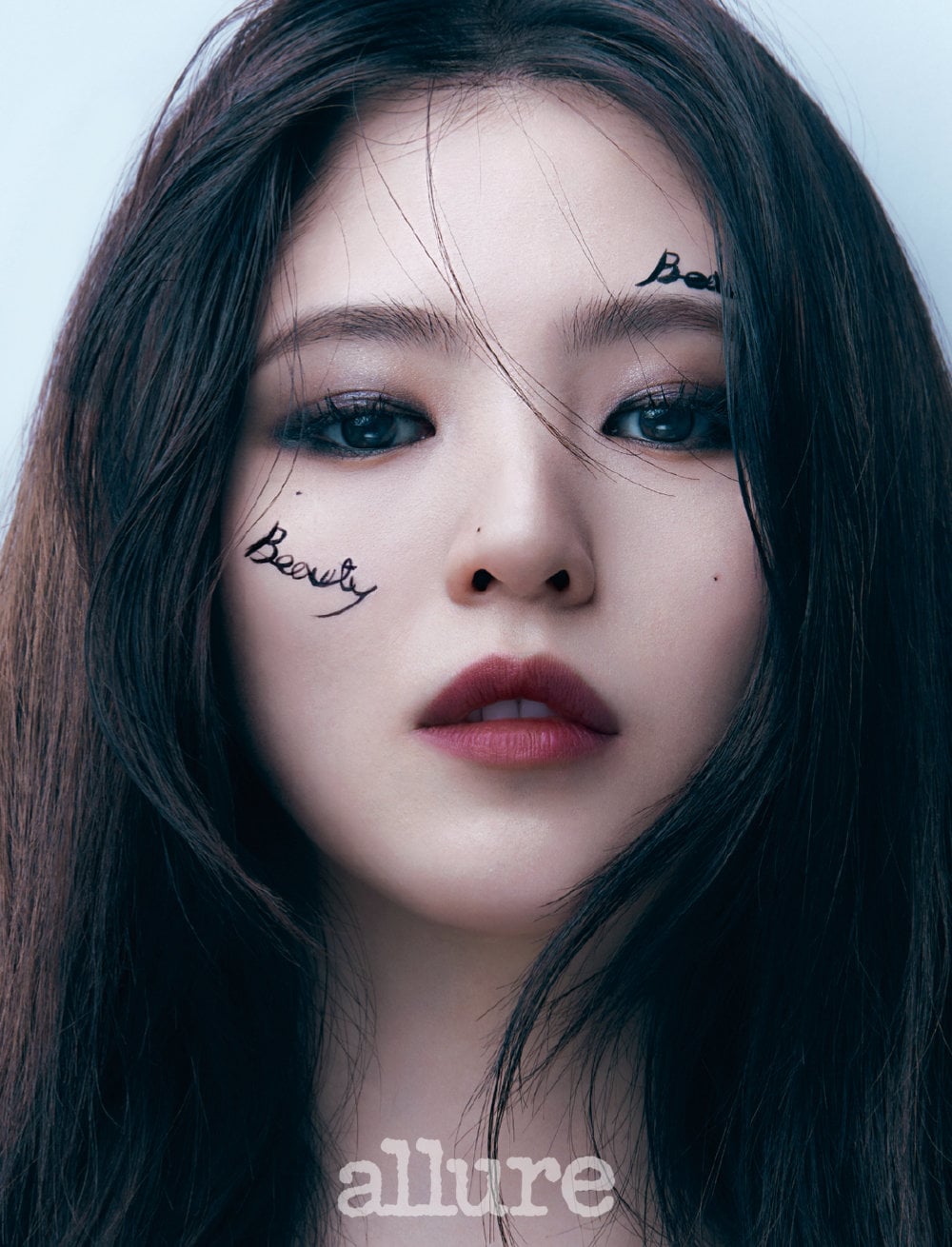 For her greatest inspiration, Han So Hee chose her grandma and explained, “I’ve always received parental love from my grandma so when I was young and going through puberty, I would think about my grandma when I was expressing my anger at the world. I’m an ‘all or nothing’ type of person so I teeter like a seesaw. However, on that axis is my grandma. My grandma doesn’t give me advice or open new doors for me, but if I just think about her existence, it feels like I naturally find my composure.”

Start watching Han So Hee in “100 Days My Prince” below:

Allure
Han So Hee
How does this article make you feel?