As the show heads into its second half, things are heating up in JTBC’s “The One and Only.”

“The One and Only” is a unique romance drama starring Ahn Eun Jin, Red Velvet‘s Joy, and Kang Ye Won as three terminally ill women who meet at a hospice. They decide that before they die, they want to take down one bad guy before they go—and in their attempt to do so, Pyo In Sook (Ahn Eun Jin) winds up meeting “the one and only” most valuable person of her life.

Over the next episodes, here are three variables to watch for that may change the direction of the plot: 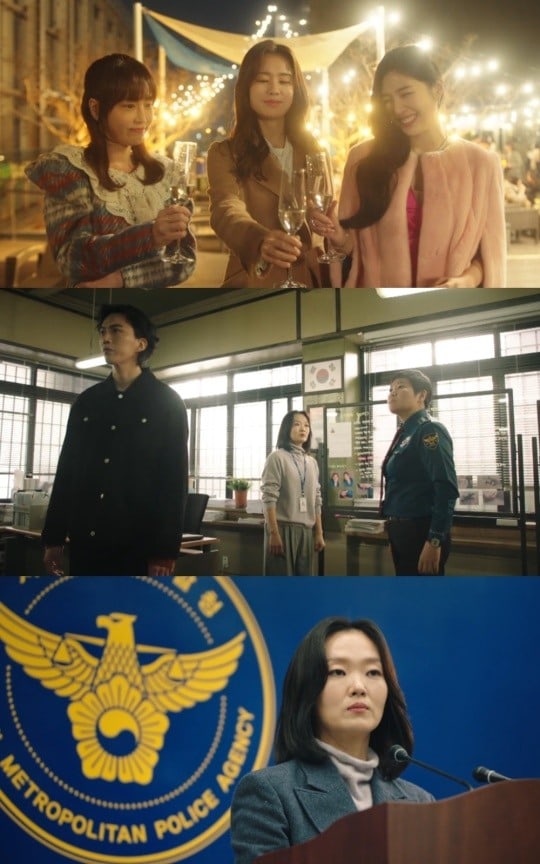 The murder case of Ha Yong Geun (Baek Hyun Jin) brought Pyo In Sook, Kang Se Yeon (Kang Ye Won), and Sung Mi Do (Joy) closer together. The three experienced incidents that challenged their friendship, but they have gradually learned to understand and accept each other. When Sung Mi Do reached the top that she had dreamed of, she hoped for Pyo In Sook to willingly turn herself in, worrying that everything would be ruined. However, in the preview for episode 11, it seems that Mi Do will join Se Yeon in helping Pyo In Sook to run away from the regional investigation unit. This is expected to cause some trouble between Sung Mi Do and Goo Ji Pyo (Han Kyu Won) though, adding more tension to the situation.

Regarding the “moss rose” murder case, internal opinions within the regional investigation unit are divided between two main sides. Hwang Ma Jin (Lee Bong Ryun) and Jo Si Young (Do Sang Woo) have had constant doubts about the “moss rose” murder case. While they find it true that Pyo In Sook swung a golf club at Ha Yong Geun that day and that she ran into Min Woo Chun (Kim Kyung Nam), who was on the the way to do a hit job, they believe more happened in between. Additionally, they felt that the second “moss rose” murder seemed staged and that Pyo In Sook confessed too easily. However, Jo Ji Ah was in a rush to cover up the incident and suspended Jo Si Young for two months when he didn’t follow orders. Now, Hwang Ma Jin is the only one left who can uncover the truth.

People’s anger grew when it was revealed that Ha Yong Geun, a victim of the “moss rose” murder case, was a six-time domestic violence offender as well as a frequent uploader on a website containg content of sexually exploited children. As a result, the perpetrator who killed him quickly became an embodiment of justice. Goo Ji Pyo, who had contracted Ha Yong Geun’s murder, quickly used this to set up the second “moss rose” murder case. People began rolling out a “murder request relay” to find the next target.

“The One and Only” airs every Monday and Tuesday at 11 p.m. KST.

Catch up on previous episodes below!

Joy
Kang Ye Won
Kim Kyung Nam
Ahn Eun Jin
The One and Only
How does this article make you feel?