Watch: Son Ye Jin, Jeon Mi Do, And Kim Ji Hyun Are Best Friends Through Thick And Thin In “Thirty-Nine” Teaser And Poster

The newly released teaser video begins with Cha Mi Jo running excitedly through soap bubbles with children. She narrates, “On the verge of turning 40, nothing much had changed.” The scene then drastically changes to show the three friends in a brawl with someone trying to grab at Cha Mi Jo’s hair and Jang Joo Hee fallen on the ground with a nosebleed.

Despite approaching the age of 40, love and first meetings are still as heart-fluttering as ever. Like realistic friends, Jung Chan Young and Jang Joo Hee lean in close to eavesdrop on Cha Mi Jo’s call with a man she is potentially interested in. Cha Mi Jo also pretends to be disgusted when a man gifts Jung Chang Young flowers. He smoothly remarks, “It was difficult to pick flowers less pretty than you.”

Jang Joo Hee also appears to be preparing something special as she lists taking wedding photos as one of her plans. However, their scheme becomes even more confusing when the next scene shows them breaking a store’s glass wall with bricks. They resolve, “Don’t look back. Let’s have fun while doing everything,” raising questions about the trio’s plot. The text, “Whether it is heart-fluttering romance, happiness, or sadness, [it is fine] as long as I experience them with you guys,” draws anticipation for the upcoming touching story.

Furthermore, “Thirty-Nine” unveiled a new poster of Cha Mi Jo, Jung Chan Young, and Jang Joo Hee wearing flower crowns and bright smiles on their faces. With petals fluttering around and a warm evening glow enveloping them, the three friends look even more beautiful than the flowers surrounding them.

The text on the poster reads, “Our ‘friendly’ days in which we laughed a lot and cried a lot,” highlighting the depth of Cha Mi Jo, Jung Chan Young, and Jang Joo Hee’s friendship and how precious their relationship is. Not to mention, the poster builds anticipation for the cast’s synergy as they portray three friends who have spent over 20 years together. 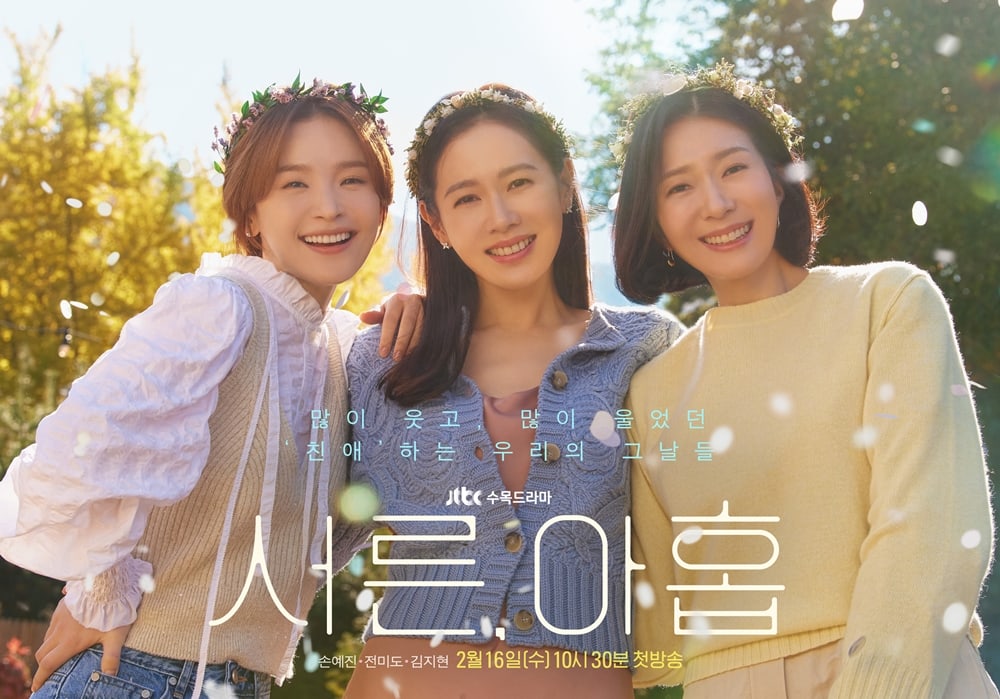 The production team shared, “We feel as if the set laughed and cried together with the actresses at every moment due to Son Ye Jin’s, Jeon Mi Do’s, and Kim Ji Hyun’s acting. The actresses’ acting synergy, which makes everyone instantly immerse [into the story], will become the greatest point to anticipate in the drama. Please show lots of interest and anticipation for the warm and refreshing ‘Thirty-Nine,’ through which viewers can reflect once again on the presence of the people precious to them.”

“Thirty-Nine” will premiere on February 16 at 10:30 p.m. KST. Check out another teaser for the drama here!

In the meantime, watch Kim Ji Hyun in her current drama “Artificial City” below: