Yoo Jae Suk has finally shared the story of how he and Lovelyz’s Mijoo wound up at their new agency!

On the latest episode of “How Do You Play?”, the cast members paid a visit to Antenna founder and CEO Yoo Hee Yeol at the agency’s new headquarters. During their conversation, Yoo Jae Suk and Yoo Hee Yeol revealed that it had actually been Yoo Jae Suk who had come up with the idea of his joining Antenna. 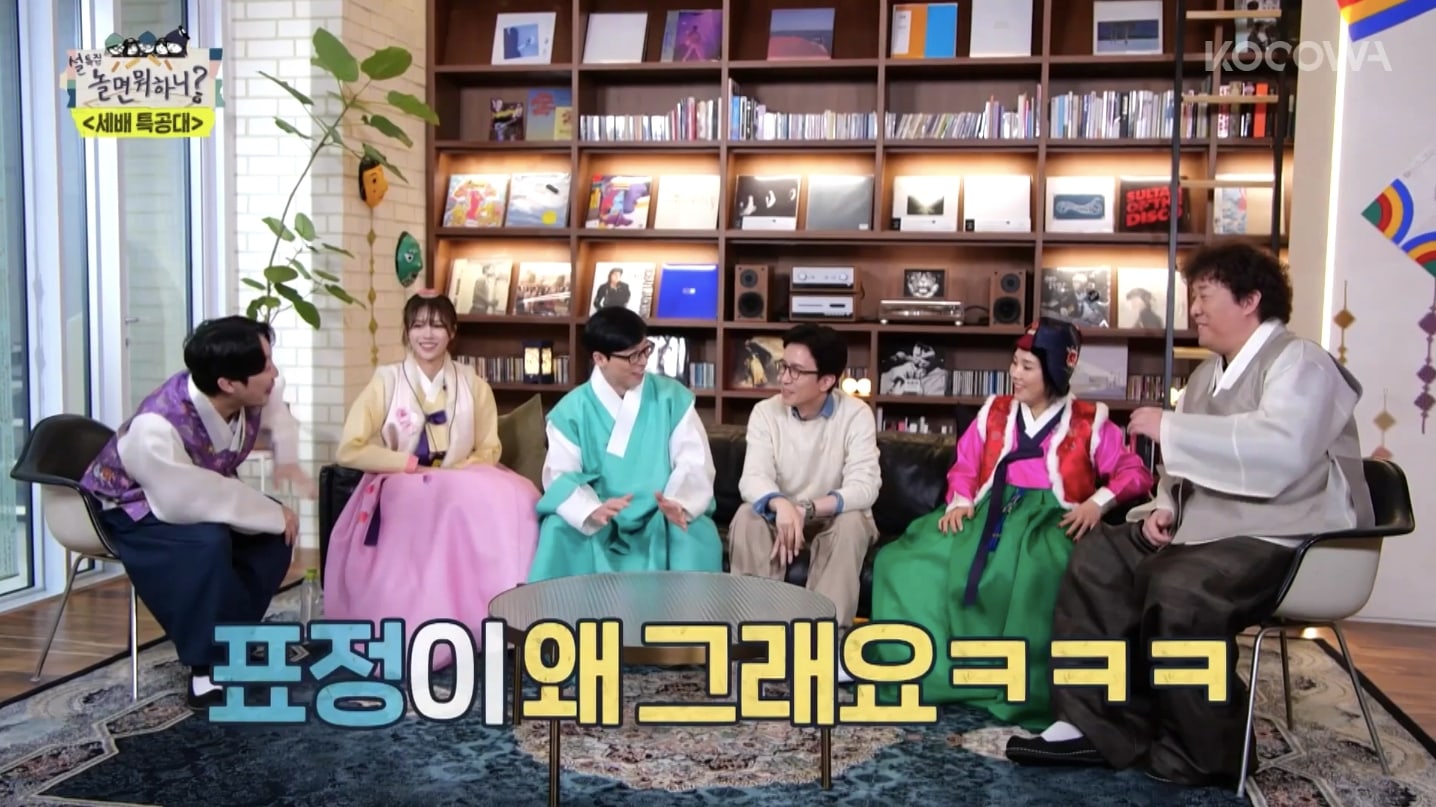 Yoo Hee Yeol recalled, “[Yoo Jae Suk] called me and asked, ‘Hyung, what do you think about us working together at Antenna?’ I thought to myself, ‘Has he gone crazy?’ I really thought that. I wondered, ‘Is he joking?'”

The Antenna CEO explained that since his agency was so small, he had never even considered the possibility of Yoo Jae Suk wanting to join. Jung Joon Ha chimed in, “Right, since [Jae Suk] isn’t even a musician.”

“I’d never even joked about the possibility,” continued Yoo Hee Yeol, recalling that Yoo Jae Suk used to drop by his office and teasingly worry about how the company was doing. “But then he suddenly asked what I thought about the two of us working together. So I thought he was teasing me. I wondered, ‘Is he really teasing me like this?’ But then our conversation became more concrete, and Jae Suk said something really cool to me. As we were talking, I suddenly felt like the conversation was getting serious, and then he said to me, ‘Hyung, it’s you that I’m working with. I’m going to choose this agency because I trust you. There’s nothing else to it.'”

However, Yoo Hee Yeol went on to reveal with a laugh, “Nowadays, when we’re working together and he gets a little disappointed or upset, he’ll get sulky and mutter under his breath, ‘Should I just buy out this agency?'” As everyone cracked up, Mijoo chimed in, “I’ve heard him say that too!” 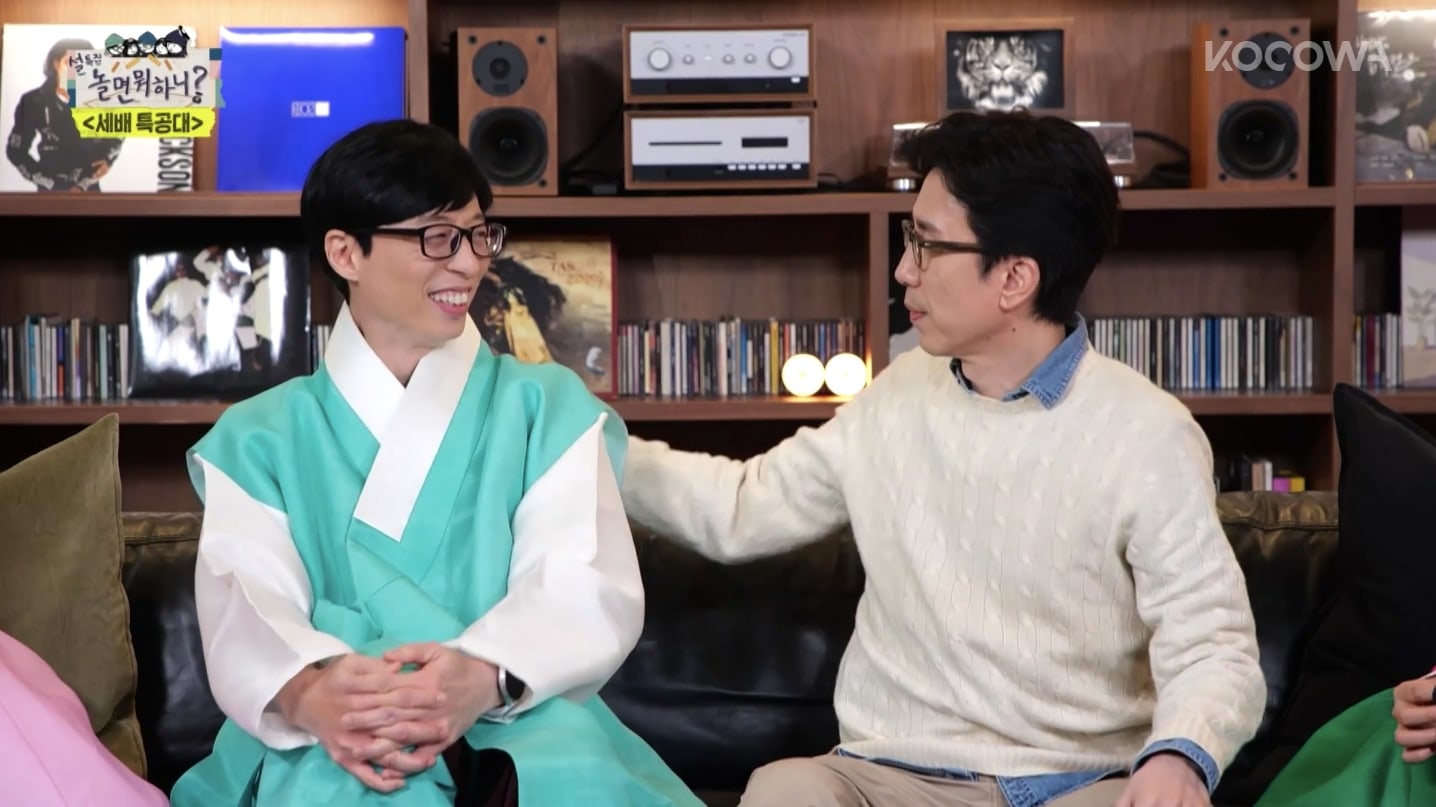 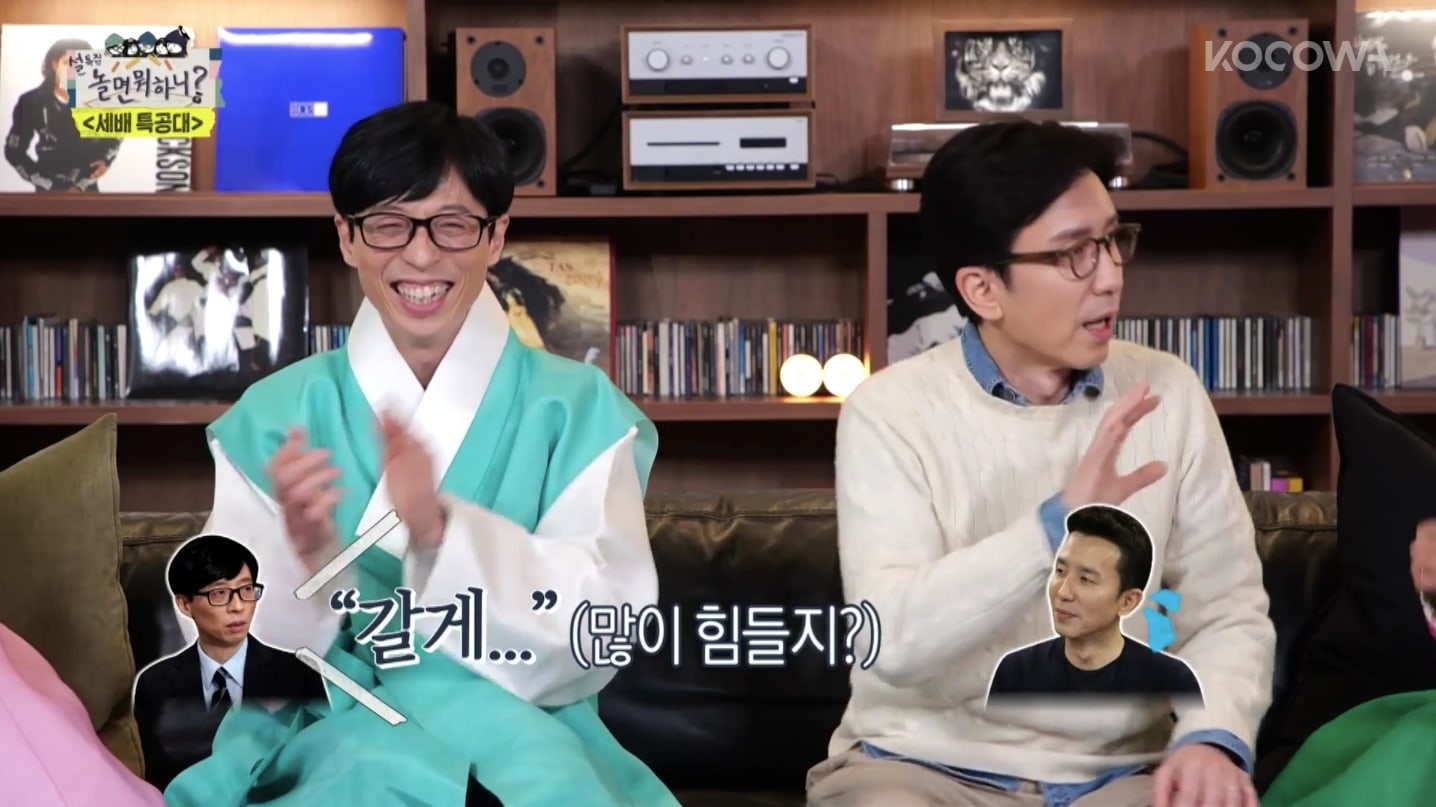 HaHa then brought up the false rumor that Yoo Jae Suk had chosen not to receive a signing bonus when signing his exclusive contract with Antenna. Yoo Jae Suk clarified, “That’s right, I need to talk about this. I was planning to do that. To be honest, when I signed with Antenna, they were short on money, and they weren’t really in a position to give me much of a signing bonus.”

He went on, “So I said, ‘Hyung, let’s not make this complicated. Let’s just forget about the signing bonus, and let’s start working together without one.'” Yoo Hee Yeol echoed, “He said he would work freely and comfortably [without a signing bonus], but I was against it.”

Explaining his decision, Yoo Hee Yeol continued, “Yoo Jae Suk has a certain influence as a celebrity. There are countless junior entertainers [who are affected by his decisions]. If we compared him to a baseball player, he’d be the best clean-up hitter in the nation. But if he joined the team without a [signing bonus], his juniors would have to follow his precedent when joining [their own teams]. I didn’t want to set that kind of precedent.”

Yoo Jae Suk agreed, “It could have been misunderstood, or our good intentions could have accidentally set a bad precedent.” Yoo Hee Yeol playfully went on to recall, “I told him, ‘That kind of situation could arise, so I’m against the idea [of not giving you a signing bonus].’ And then Yoo Jae Suk said right away [with a happy smile], ‘That’s probably for the best, right?'” 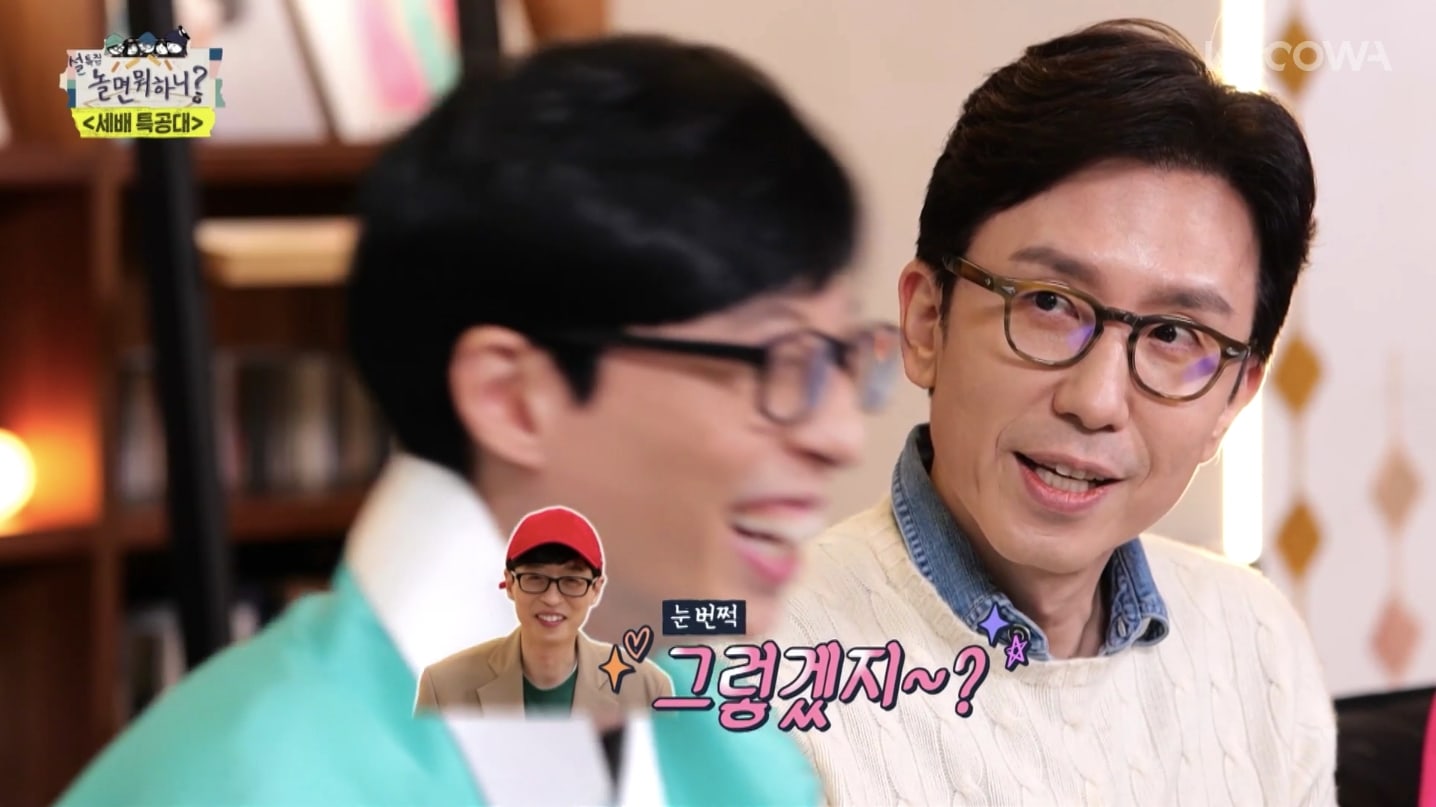 Later, Yoo Jae Suk explained how Mijoo had wound up joining him at Antenna. “Mijoo told us her contract [with her former agency] was expiring, and so she was looking for a new agency,” he recalled, before teasingly continuing, “So one day, I asked Hee Yeol, ‘Hyung, what do you think of Mijoo?’ And I could tell from his voice that he didn’t really know who Mijoo was.”

After Yoo Hee Yeol urgently insisted to Mijoo that that wasn’t true, Yoo Jae Suk added that while Yoo Hee Yeol had initially been reluctant about rushing to add another non-musician to their roster, he soon changed his mind. “He said he’d think about it some more, and three weeks went by. Then he suddenly called me and said, ‘Jae Suk, let’s bring Mijoo in.'”

Yoo Hee Yeol explained, “The reason I wasn’t sure about Mijoo was because I hadn’t really seen the programs she was in. But then I looked up everything she’d been in, and I understood why [Yoo Jae Suk] had brought her up. So I thought, ‘She’s great. Let’s bring her in.'”

Yoo Jae Suk then shocked Mijoo by revealing that HaHa had also been interested in signing her to his own agency. Despite an embarrassed HaHa pleading with him not to tell the story, Yoo Jae Suk shared that on the exact same day that Yoo Hee Yeol had decided to sign Mijoo, HaHa had called him to talk about her.

“At midnight that same night, HaHa called me and said in a serious tone, ‘Hyung, I have something to tell you.’ I got nervous and asked, ‘Why? Have you been drinking?’ And he said, ‘No, I’m sober. I’m calling you after a really long discussion with my company staff. Hyung, I’d like to bring Mijoo into our agency.'”

A surprised Mijoo turned to HaHa and exclaimed, “Really? Why didn’t you say something? I had no idea!” Yoo Jae Suk went on to recall that he had felt incredibly apologetic to HaHa, who’d had no idea that Antenna had been thinking about signing Mijoo.

As Mijoo remarked, “Wow, I’m so grateful,” Yoo Hee Yeol commented, “I’ve realized that these kinds of things all come down to timing. Just like in romantic relationships.” 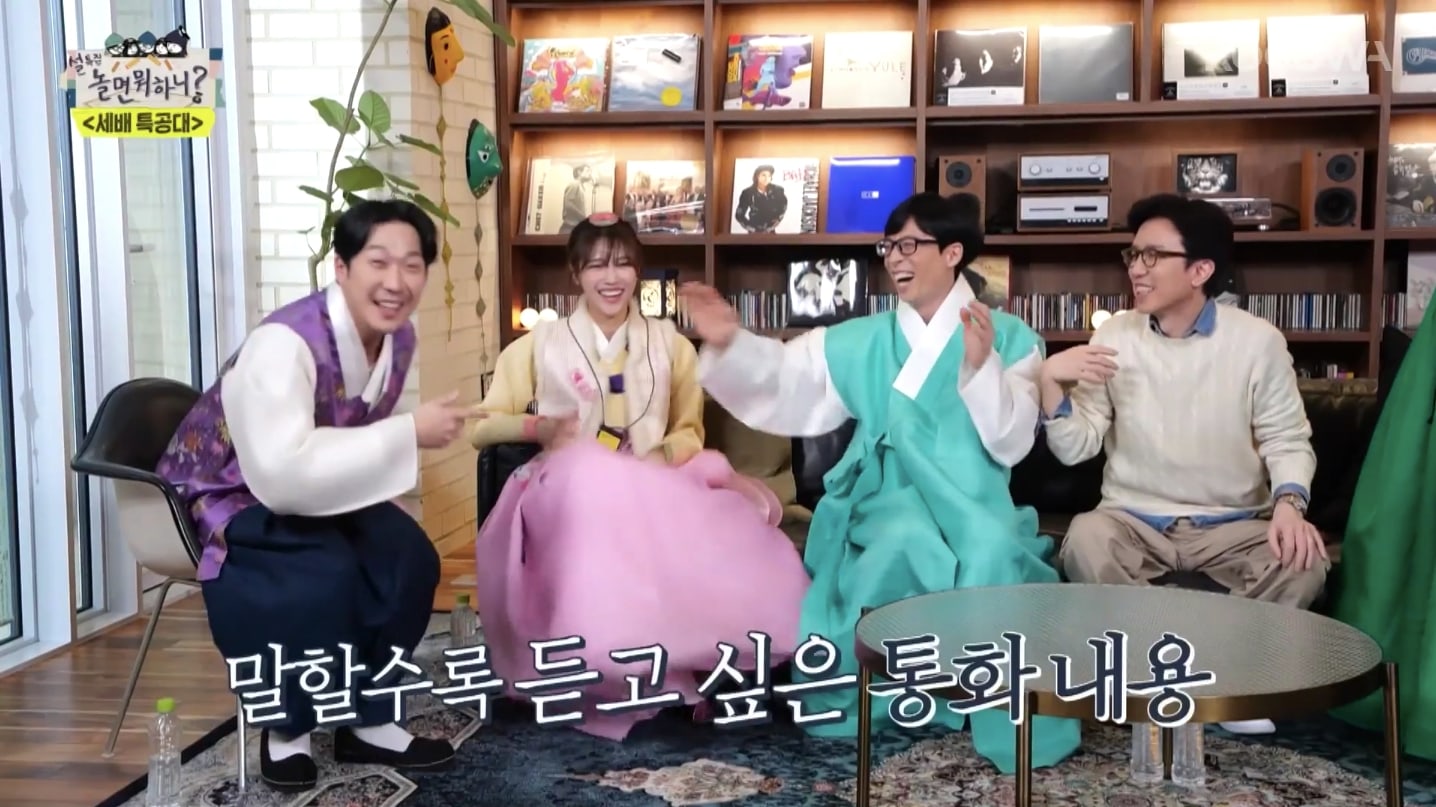 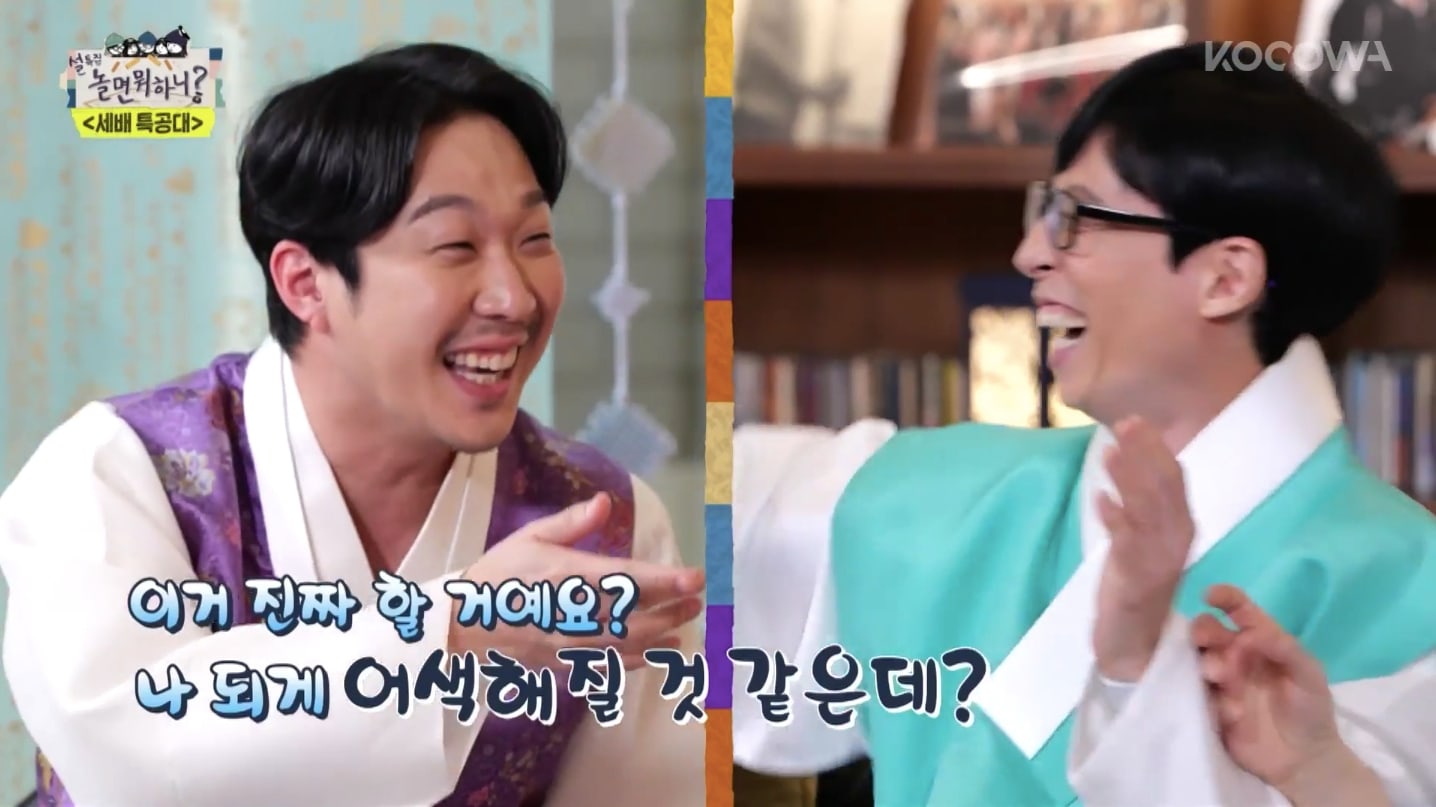 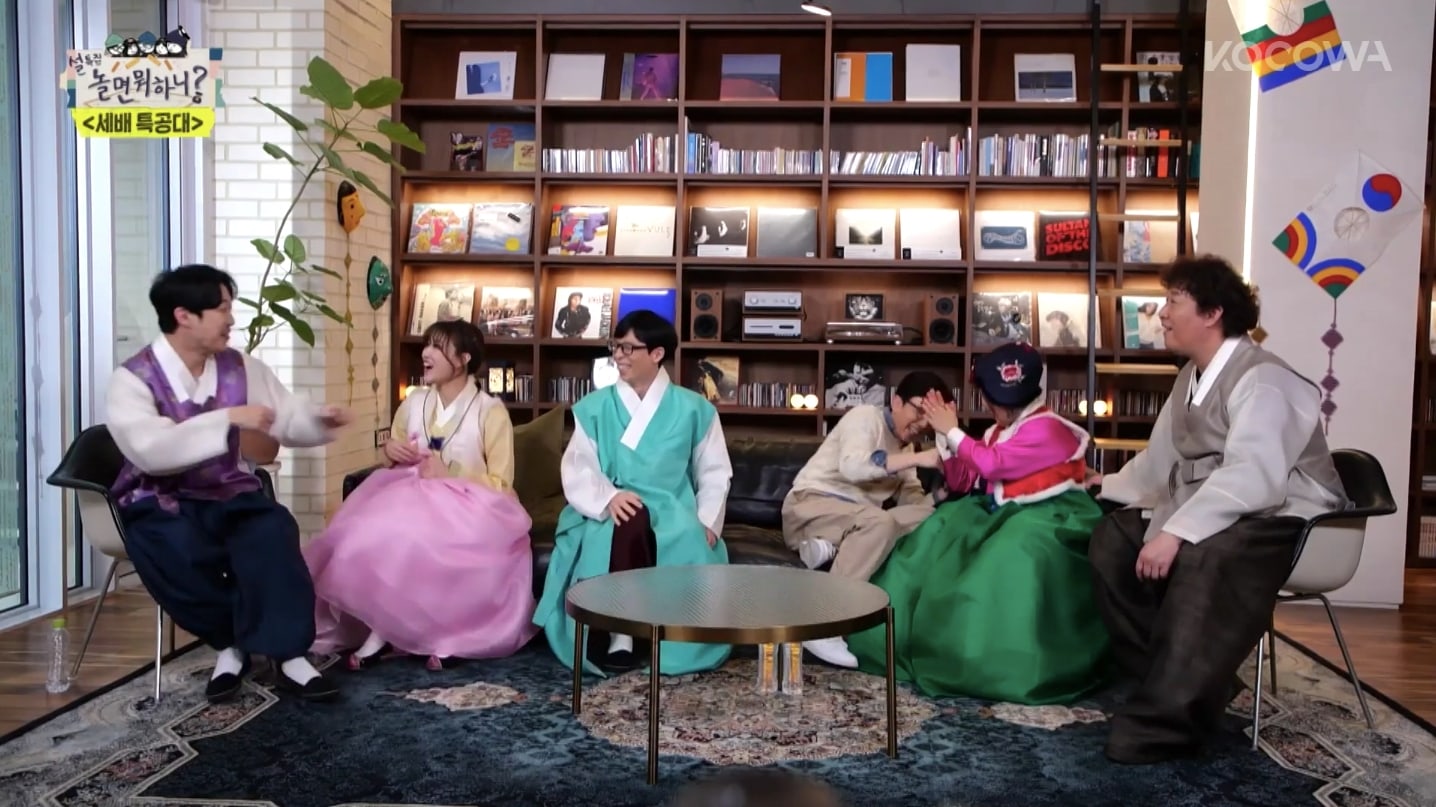 Lovelyz
Yoo Jae Suk
Mijoo
Yoo Hee Yeol
HaHa
How Do You Play?
Antenna
How does this article make you feel?