On the February 6 episode of SBS’s “Running Man,” the cast shared an update on Jun So Min and Song Ji Hyo, who were absent from filming.

On January 20, Super Junior’s Eunhyuk confirmed that he was diagnosed with COVID-19. Eunhyuk had filmed “Running Man” on January 17, so the entire cast and crew of the show were tested for the virus. Everyone tested negative, but as Song Ji Hyo is not yet vaccinated due to a drug allergy, she stated that she would be self-quarantining for 10 days. Meanwhile, Jun So Min is taking a brief hiatus from work to recover from the surgery she had to repair her foot fracture.

During the opening segment of this week’s “Running Man,” Yoo Jae Suk said, “So Min had her surgery and will be discharged from the hospital today [the day of the recording]. Ji Hyo hasn’t been vaccinated, so she’s in self-quarantine.”

Ji Suk Jin said, “We all know this already, but she has an allergic reaction to certain drugs. She can’t even use antibiotics.” Yoo Jae Suk agreed and said, “She usually has trouble taking Western drugs.”

Yoo Jae Suk said that Song Ji Hyo’s self-quarantine would end the day after tomorrow once she got the results of her final PCR test. He added, “I called her, but she said that she’s really enjoying self-quarantine.”

HaHa said, “I also called her to ask if she was okay, but she said she was really happy.” Yoo Jae Suk said, “She calls me about once a day,” and Ji Suk Jin said in surprise, “Wow, she’s really changed.” Yoo Jae Suk added that Jun So Min called him twice a day, once in the morning and once in the evening.

HaHa said, “I asked her what she was doing and she said she was making ttukbaegi bulgogi in a really excited tone.” Yoo Jae Suk joked, “She changes her tone when she talks?” 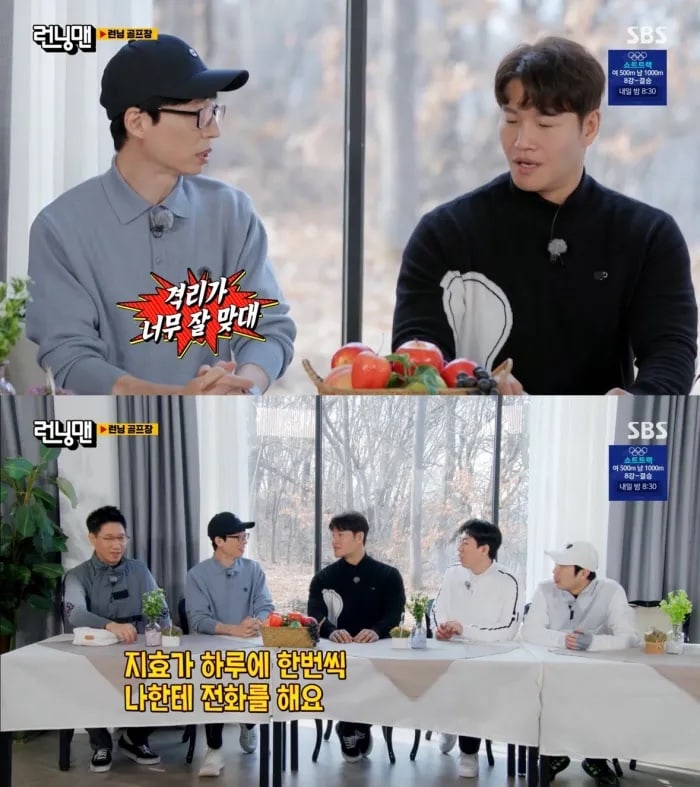