Son Ye Jin, Jeon Mi Do, Kim Ji Hyun, And More Share Details About Their On-Screen Romances In “Thirty-Nine” + What The Drama Means To Them

JTBC’s drama “Thirty-Nine” will deal with friendship, realistic life concerns, and “wo-mance,” as well as romance!

“Thirty-Nine” stars Son Ye Jin, Jeon Mi Do, and Kim Ji Hyun as three friends who met in their second year of high school and are now on the verge of turning 40. The series will follow the three 39-year-old women as they encounter unforeseen circumstances in their lives, including their relationships with Yeon Woo Jin, Lee Moo Saeng, and Lee Tae Hwan.

Out of all ages, director Kim Sang Ho elaborated on why they chose to focus on the age 39. He explained, “To borrow the words of writer Yoo Young Ah, she said that 39 is an age full of nerves right as you approach 40. It feels a bit early to achieve something before you turn 40, but it also feels a bit late to start something new, so I think it’s an ambiguous age that’s full of nerves. We wanted to portray the story of three friends reaching that age, accepting it, and moving forward from that turning point.”

As this is Son Ye Jin’s first drama in two years since wrapping up “Crash Landing On You” in early 2020, the actress talked about how she came to choose “Thirty-Nine” for her next project. She commented, “For starters, the script was so fun. I read the script so quickly, and the dialogue was so fun. If I weren’t at this age right now, how would I be able to work on projects like this as an actress? For the sake of my conscience. Even though I’d do it if given the opportunity again.”

Son Ye Jin continued, “I was able to relate perfectly to this age and the story of these women’s lives and romances. To the point where I wondered whether the writer had installed cameras in my house, there were a lot of parts that made me go, ‘This is a line I say [in real life]?’ [My character] Cha Mi Jo is also crazy about golf, and I like golf. That’s how much I was able to relate to it.”

The star also touched on her upcoming marriage to “Crash Landing On You” co-star Hyun Bin, as the couple announced their engagement earlier this month. Son Ye Jin asked host Park Seul Gi, “How is it, now that you’re married?” The host replied, “It’s so nice,” to which Son Ye Jin shared, “I hope it’s like that for me too. I’m so thankful. Both personally and as an actor, so many big things have happened to me at the start of 2022, so I believe that it’s fate. I’ve received so many congratulatory messages, so I want to take this opportunity to say that I’m so thankful.”

The three actresses then spoke about their chemistry, with Son Ye Jin sharing, “Even though we didn’t try to become close, we became close anyway. My first impressions were that I wanted to bite Jeon Mi Do [because she was so cute] and that Kim Ji Hyun appeared cold, but I liked her the more I got to know her. We became close so naturally that later on, even when we were filming serious scenes, we were always chatting.”

Jeon Mi Do revealed, “Kim Ji Hyun and I have been friends for over 10 years. We’ve played the same roles, and we’ve also appeared in the same project in different roles. We’re both originally Son Ye Jin fans. Since I don’t have a lot of [drama] experience, I was lacking in a lot of aspects, so I’d always ask ‘Pro Son’ or ‘Senior Son’ to teach me. She taught me a lot, and I think that’s how we became close so quickly.” 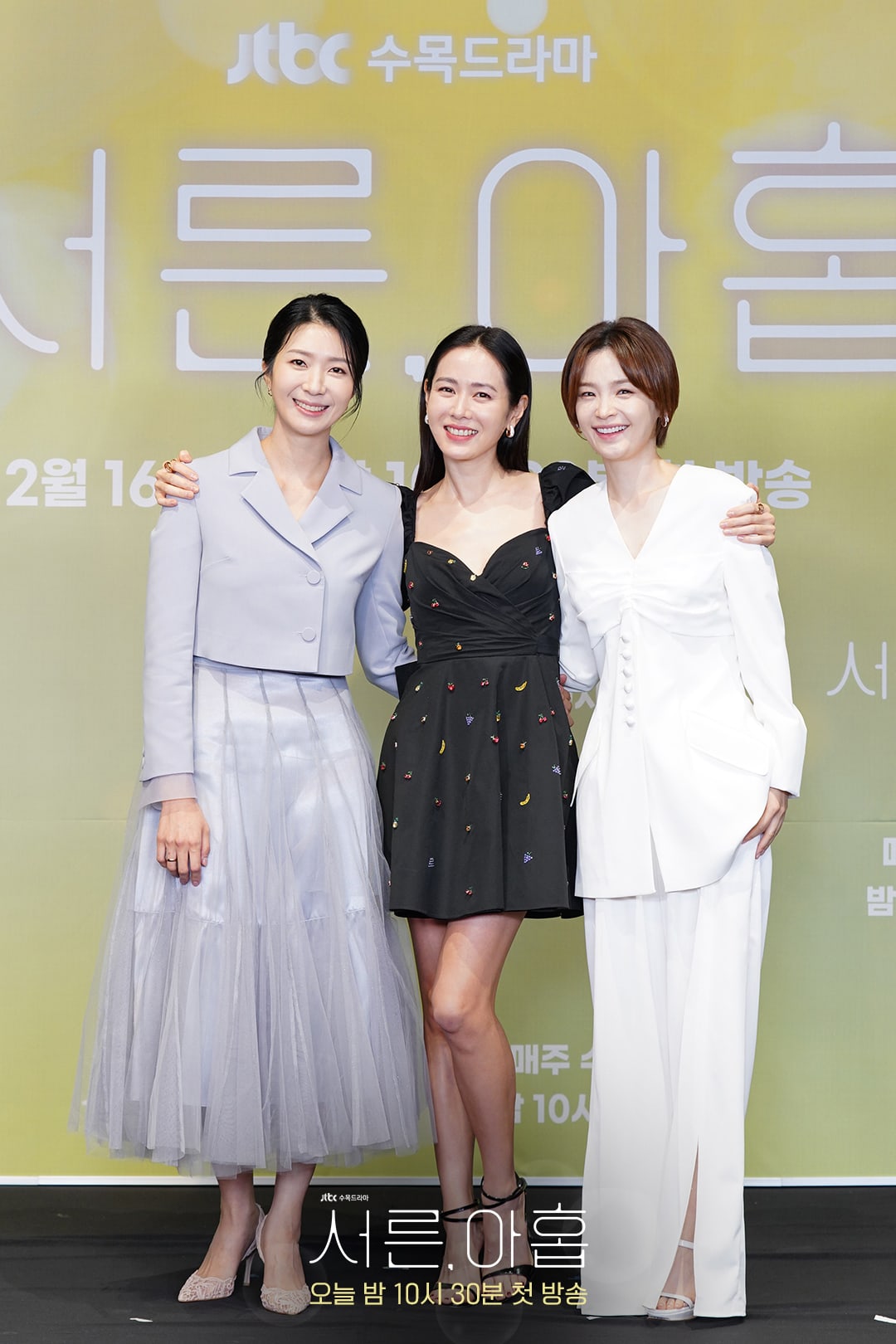 In terms of what sets “Thirty-Nine” apart from other dramas, Kim Sang Ho shared, “We wanted to draw out the friendship between three humans, as opposed to three women. We tried our best to sincerely deal with and convey the emotions that any human can feel.” Jeon Mi Do added with a smile, “I haven’t seen too many ‘wo-mance’ dramas, but I think we’re the oldest. You can look forward to our experienced and substantive romances.”

Kim Ji Hyun continued, “When I was watching the videos, there are scenes of our ‘wo-mance’ in present day, but there are also scenes from the past. We have younger actresses play our younger counterparts, but there are also a few scenes we filmed where we specifically dressed up to look younger. It was so funny while filming.” Jeon Mi Do hilariously chimed in, “We don’t look young at all.”

The ladies also talked about their on-screen romances. Kim Ji Hyun commented, “In ‘Thirty-Nine,’ my romance with Lee Tae Hwan has a very mild taste [as opposed to spicy]. It’s a romance that’s on the cusp of blossoming. It’s a very healthy relationship, but my character has never dated and is really careful about meeting someone younger than her. It’s a very subtle romance with a mild taste that doesn’t have any added MSG.”

Jeon Mi Do shared, “Our couple has a story. They’ve been tangled up numerous times, and while they appear dumb, they’re also sad and full of resentment, so it’s hard to sum up with one word. I hope you will keep an eye on how this relationship evolves and concludes.”

Son Ye Jin commented, “Yeon Woo Jin’s character is so perfect, to the point where I don’t think there is a man like him in the world. He’s an unbelievable romantic straight out of a fairytale who is so considerate and forgiving. That’s why I think you’ll be able to enjoy living vicariously [through my character].” 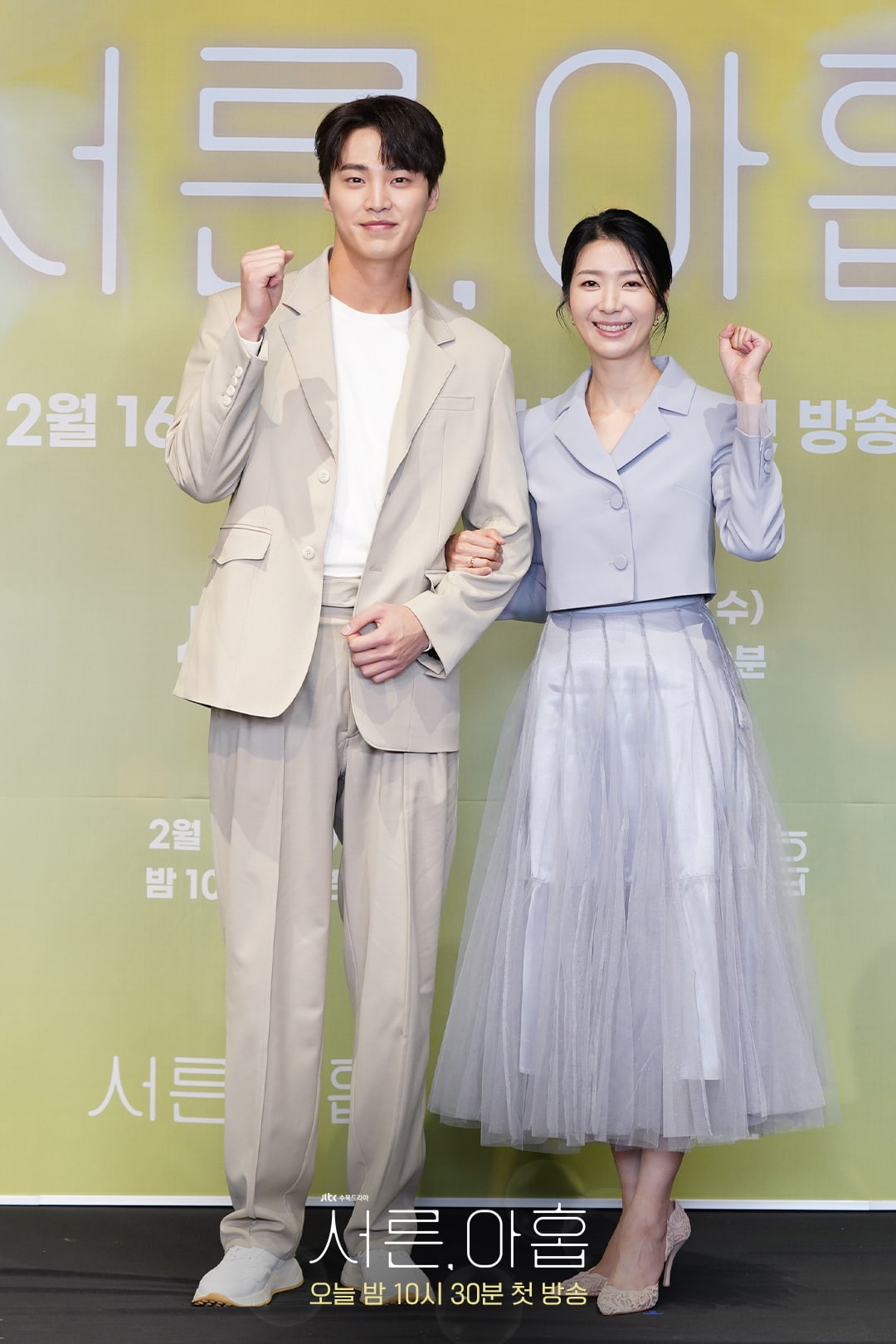 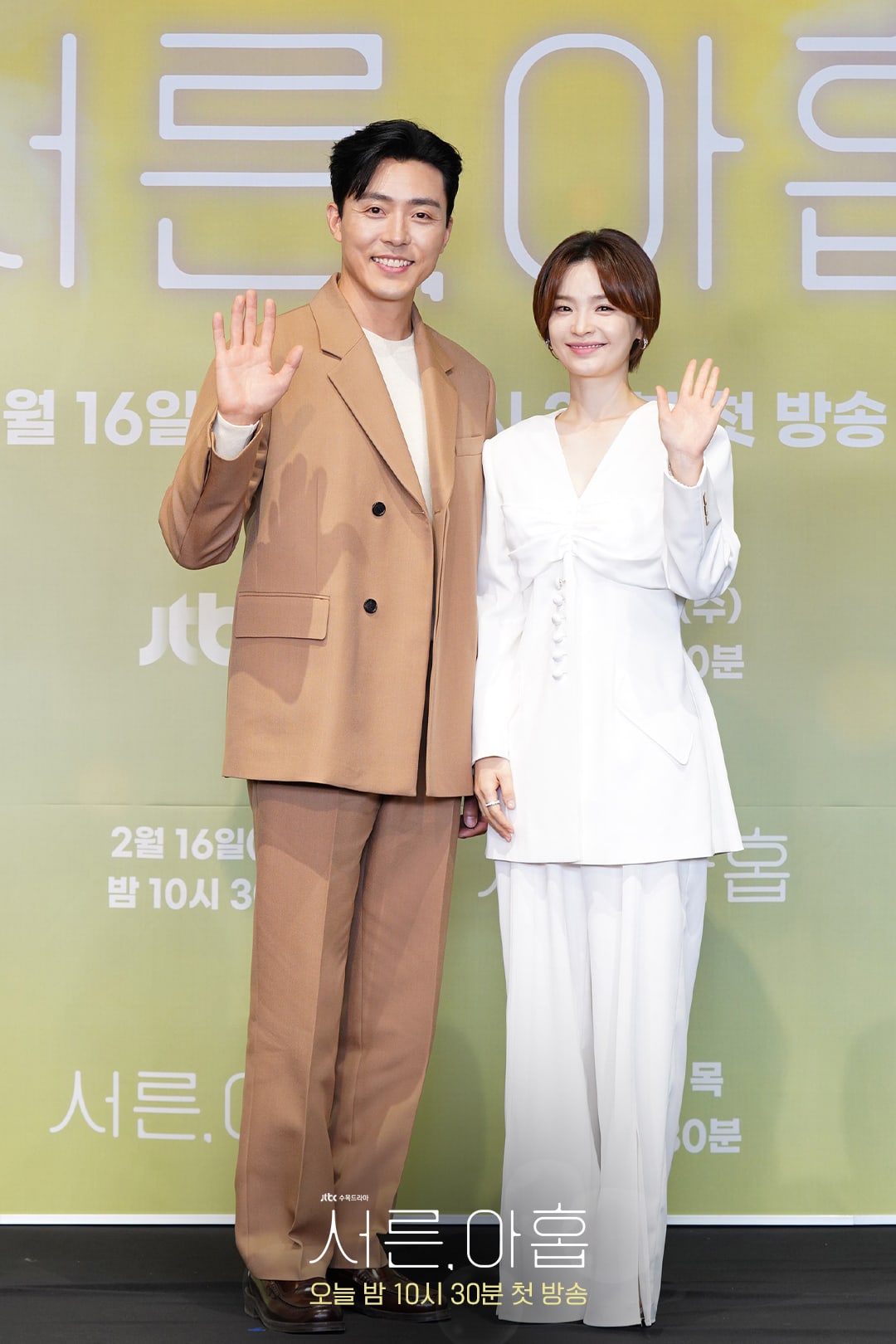 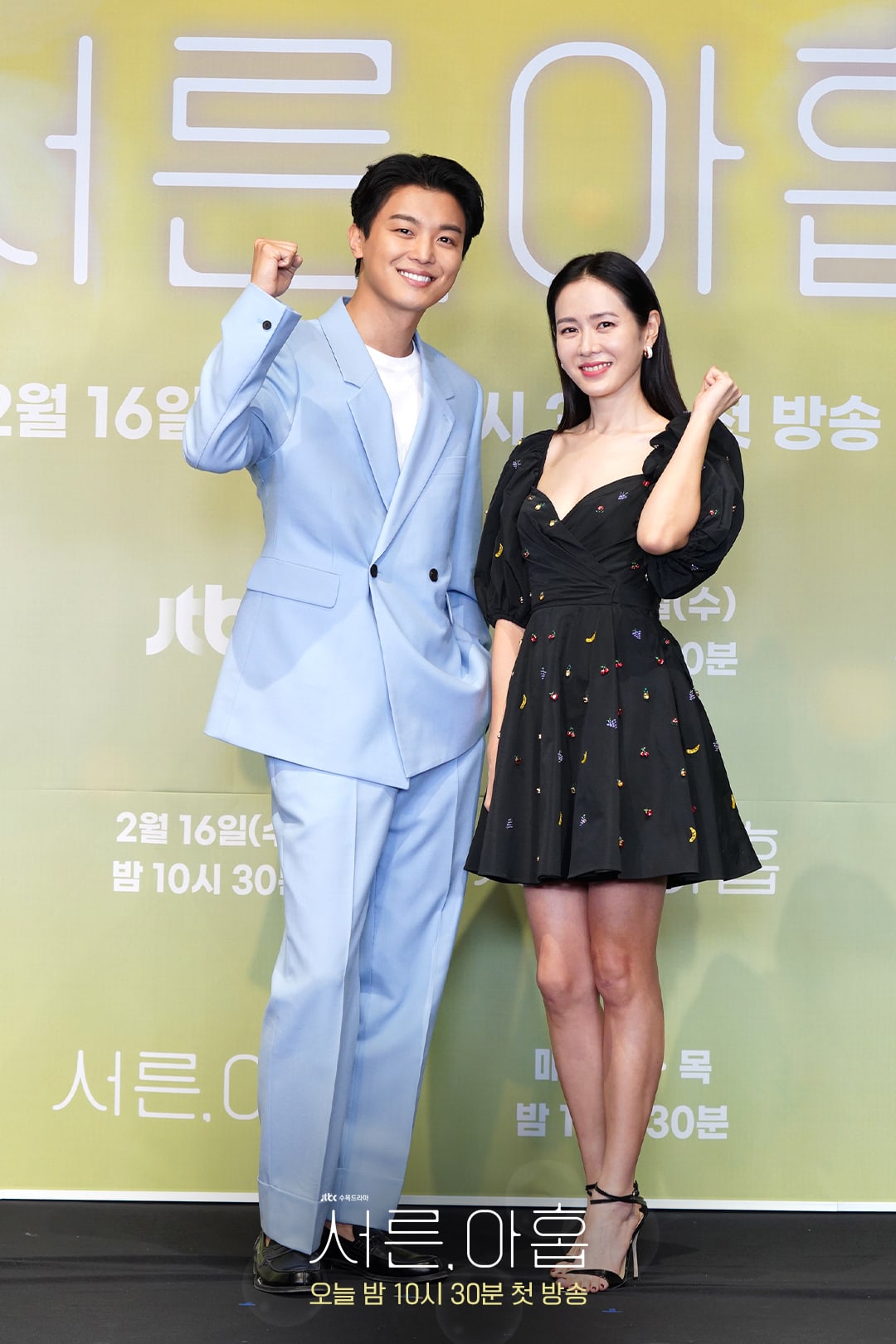 Lastly, all six cast members shared what “Thirty-Nine” means to them. Lee Tae Hwan commented, “I still have 11 years until I’m 39 years old. For starters, I think I’ll become a bit more masculine. I think I’ll feel different if I watch ‘Thirty-Nine’ at that age. This is just my wish, but in 11 years, I want to film ‘Forty-Nine’ with the same cast.”

Lee Moo Saeng shared, “39 feels so distant from me now, so if my memory serves me right, they typically say that 40 is the age when you become free of vacillation. They say that it’s an age where you’re not swayed no matter what decision you make, so I also had a lot of worries around [the age of] 39. Whether I’d be able to not get swayed, no matter the decision. However, I still sway today, and I think I’ll continue to sway in the future. My mentality these days is that if I’m to sway, I must not break. That’s how I’ve become more relaxed and gained some freedom. I hope the same for everyone: that even if you sway, I hope you won’t break.”

Yeon Woo Jin explained, “I’m currently 39 and I have quite a lot of concerns, but I’m thinking of making this a year where I can put my bucket list into practice. Personally, I’m definitely going to get my health check-up, and I’ve never gone on vacation alone, but I want to go one time. While I’m on vacation, if there’s someone else who’s 39 years old, I would like to greet them.”

Kim Ji Hyun continued, “It’s lame, but if I were to put it all together, I’d say we were only 39 once we were cast and acted [in our roles]. You can look at it like my 39 was filled with the drama ‘Thirty-Nine.'” Jeon Mi Do added, “I began auditioning at 39 and ended up filming ‘Hospital Playlist.’ It was an important time for me. That’s how I ended up doing ‘Thirty-Nine.'”

Son Ye Jin shared, “People always talk about superstitions about the number nine. However, when I became an actress in my twenties, I didn’t think that I’d turn 40 after my thirties. I’ve never thought about or imagined my life after 40. However, I’m suddenly over 40 now. It makes me realize that age is not that important. If they ask whether you become a mature adult because you turned 40, I don’t think that’s the case at all. This is mentioned in our drama too. ‘We ate tteokbokki in high school, but I didn’t know we’d be eating it even after we turned 40.’ We’re young at heart; it’s just the number that’s changed. I hope you do not focus on numbers and rather live while experiencing time.” 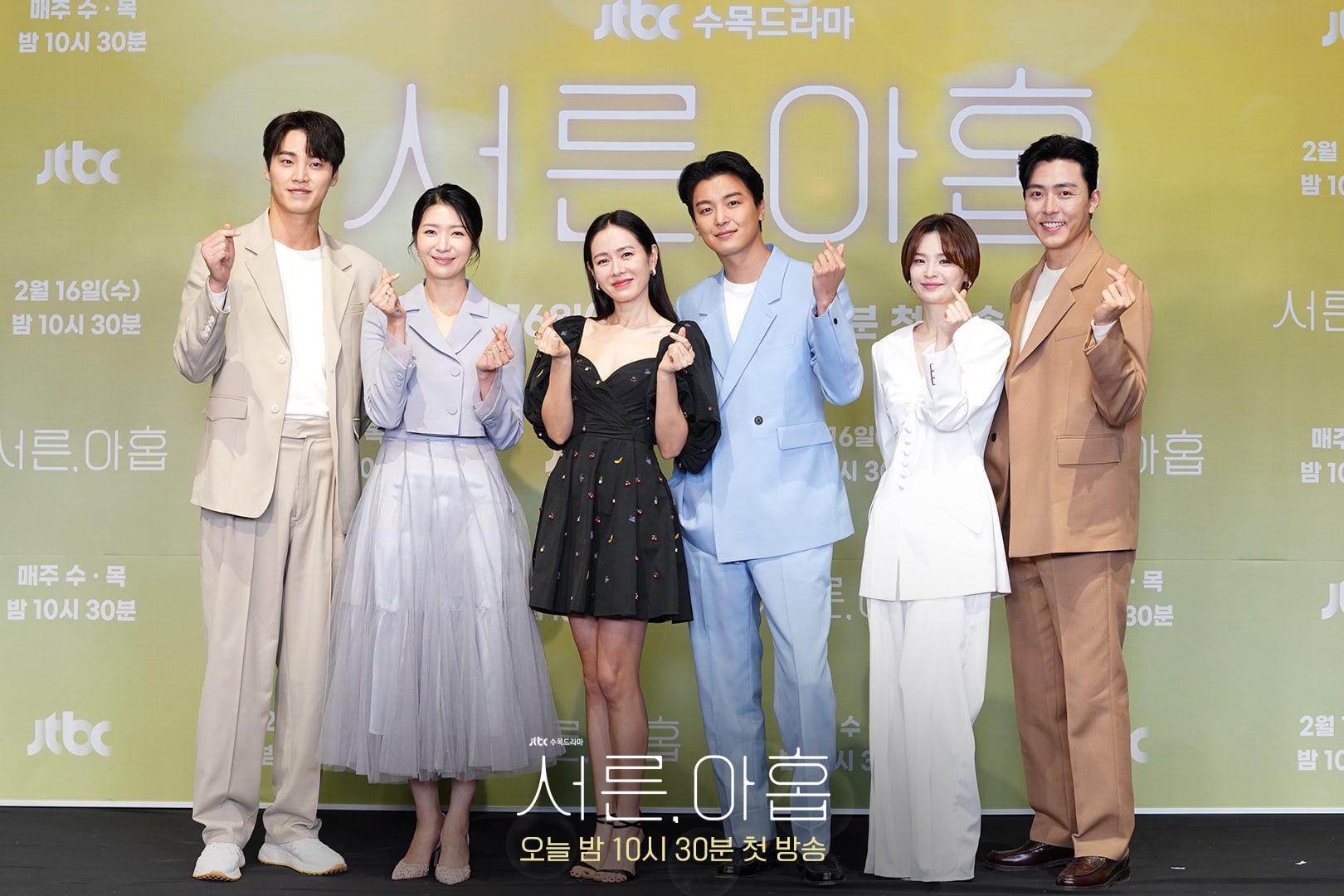 Finally, the director commented, “This is a drama where there will be lots of fun in watching the actors’ detailed acting. I wanted to capture this incredible acting on screen without damaging it. You’ll be able to enjoy watching if you focus on the emotional acting.”

After premiering on February 16, “Thirty-Nine” will air every Wednesday and Thursday at 10:30 p.m. KST.

Watch Son Ye Jin in “Be With You” below!