Another year, another legal K-drama. Only this one looks a little different.

In the vein of last year’s masterpiece “The Devil Judge,” “Military Prosecutor Doberman” examines justice using a different venue: the military. In doing so, it rips into Korea’s most familiar yet most secretive institution. As legions of K-pop fans will know, every Korean male, barring very good reason, must serve in the army. It’s a rite of passage for some, a career revival for others, and a tool of manipulation for the wealthy elite. Yet, if the subject matter sounds heavy, the drama is anything but. This show comes from the same no holds barred writer who penned “Lawless Lawyer” and hits hard right out in the opening episodes. We get tongue-in-cheek humor, a refusal to take life seriously, and a Doberman named Bolt who roams free in a club (really). There’s a lot to cover and a lot to love here!

Here’s what we enjoyed the most about the opening episodes!

The cold open. Few dramas bother with this nowadays, but it’s a such a joy to be introduced to a main character on his very worst day, as he thinks back to where it all went wrong. Dangling upside-down from a skyscraper isn’t anyone’s idea of fun, and Do Bae Man (Ahn Bo Hyun) is having the worst day ever as he traumatizes a group of diners by hanging over traffic. Above him, a mysterious figure saws at the rope tethering him to the roof (and to life). As he begins to fall, he quite literally sees his life flash before his eyes, and that’s where we delve into the show. It’s a fantastic start and keeps you guessing on just who Bae Man’s would-be-killer is, and whether Bae Man will have a backup plan to prevent this by the time we reach this scene in the drama. Like “Lawless Lawyer,” this is a show where the villains are revealed upfront so it’s nice to have some reason for mystery and keep us guessing throughout the watch.

Plus it relates so nicely to the opening and ending monologues by Bae Man and Woo In on living in a world turned upside-down. It’s great writing.

The drama portrays Do Bae Man as a nasty piece of work, who’s out for nothing but money. Yet, we always see hints of more underneath his devil-may-care facade. Like his canine namesake, Bae Man is built for action and stops at nothing if it means getting his way, whether that’s being exempt from the military, to passing the bar despite being a high school dropout, to throwing chairs at the interviewers who dare look down on him. And for the past five years, Bae Man has had everything in moderation. Money, power, influence, status. He isn’t one of the really bigwigs, but he’s high up there.

Still, he doesn’t seem to be entirely corrupt. There seems to be a streak of justice in him, as evidenced in his handling of the supposedly innocent and naive bank president’s son (more on that later). Bae Man has a nose for corruption and can spot a plot a mile away. Yet, he also bows to money without compunction. It’s an interesting duality that raises the question of just who he is and which part of him will win as he moves forward. But Bae Man isn’t the only one with two faces, and if he’s a dog, then his counterpart is a feline force to be reckoned with.

Jo Bo Ah finally lands a meaty role after her underused turn in “Tale of the Nine-Tailed,” and she’s killing it. Our first glimpse of Cha Woo In shows her as competent, intelligent, and uncaring of normal social (and hierarchical) ways. She’s unassuming enough to blend in, but odd enough to stand out, ever so slightly. Bae Man senses that there’s something strange about her that he just can’t put his finger on, and as it turns out, it’s much more than that.

Our girl is a vigilante. Moonlighting as a seriously brutal fighter by night, she slides into the apartments of rich, soulless men, beats them within an inch of their life, drugs and kidnaps them. Whew! It’s all in a night’s work to her as she reports to her boss (as of yet unknown), but wow, girl hasn’t even broken a nail. It’s incredible.

Woo In is incredibly suspicious of Bae Man’s handling of a case of preferential treatment, supposedly given to Sergeant Ahn Soo Ho (Ryu Sung Rok), a major bank president’s son. Turns out that she’s right, but not perhaps for the reasons you might expect. 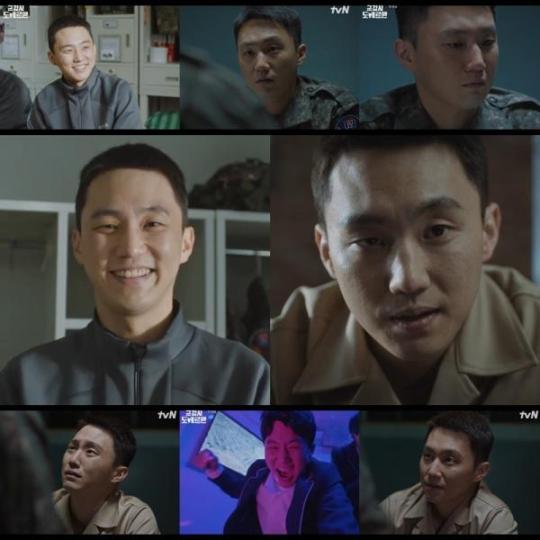 Ryu Sung Rok always plays bad guys whenever he appears in dramas, so it came as a surprise to see him being this mild-mannered sergeant, unfairly caught in Bae Man’s trap. The show lets us go almost a whole episode thinking that Bae Man literally framed an innocent man and sent him to jail because his boss asked him to, until the other shoe drops. Bae Man casually reveals that he knows who Soo Ho is and what he’s done. Cut to a montage of Soo Ho beating someone to death just because he can, and all sympathy for the little weasel vanishes, plus Bae Man suddenly starts to look really good.

It’s so much fun having a show that keeps a few cards close and uses them to pull the rug out from underneath the viewers. This reveal was so well done and completely changes a watcher’s perspective of Bae Man’s actions. So good!

Bae Man quickly finds himself moving up the ranks when his boss’s boss (aka a major villain and dog lover) No Tae Nam (Kim Woo Seok) orders him to look into the disappearance of his friend and fellow rapist, a K-pop idol. Naturally, Woo In is behind the disappearance, and erased all CCTV records of her appearance save a blurry clip of her side profile when she enters the idol’s apartment. When Bae Man finds a red hair from Woo In’s wig that night, he’s immediately intrigued as to who the woman who dared to go after such a high-profile target could be .

Even K-drama veterans would expect the mystery of this red-haired woman to last a little longer. Perhaps two episodes or more. Some dramas even get 15 episodes out of hiding the vigilante’s identity (I’m looking at you, “Healer.”) But “Military Prosecutor Doberman” has Bae Man discover Woo In’s other side in 40 minutes. We’re at the end of episode 2, and he’s already guessed who she is. This show is just steamrolling ahead! But it hasn’t shown its hand just yet, as more questions remain. Who is Woo In’s mysterious boss? Why did Woo In, by every appearance, a brilliant and calculating young woman purposefully leave behind a single piece of CCTV evidence? And why did she allow for Bae Man to see her wig?

It should be interesting to see what next week holds and if the pace will slow down somewhat. But if the content is anything like what we’ve had this premiere week, then we’re in for a fantastic ride.

What did you think of the first week’s episodes? Let us know your thoughts in the comments below!