“Military Prosecutor Doberman” keeps the ball rolling this week as the rapid momentum of the initial episodes pushes the narrative to new, volatile heights. The show doesn’t hesitate to give away its secrets, and it isn’t long before both our main characters start to place all their cards on the table. But their enemies aren’t staying still either and as Do Bae Man (Ahn Bo Hyun) realizes that he’s a part of something much greater, his long-held plans start to crumble.

Here are the most shocking moments from this week’s episodes! 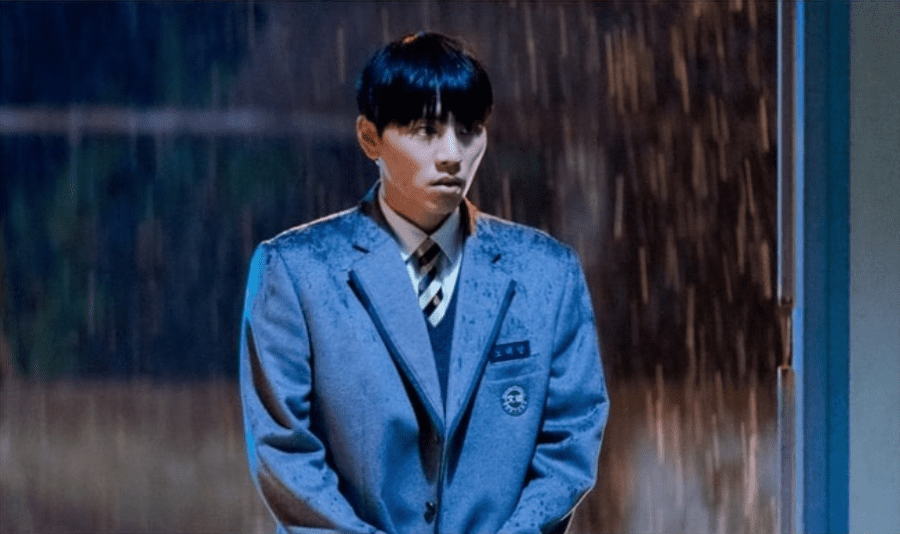 The first couple of episodes centered largely around Noh Tae Nam (Kim Woo Seok) as the main villain. However, we see that he’s only a stepping stone in the grand plan of his mother, Noh Hwa Young (Oh Yeon Soo). We know that Tae Nam hates the military and his mother equally, but the show powerfully illustrates why. In high school, Tae Nam beat up a classmate so badly the boy was left visually-impaired. His mother, unlike the typical wealthy chaebol parents in dramas that seek to coddle and cover up for their children, punishes him. She locks him in a garage, pulling the pin out of a grenade and leaving a terrified Tae Nam clutching the neck of the grenade so the fuse won’t blow. She leaves him there for an hour, standing terrified, knowing that the fuse will go off the second his grip relaxes and blow him up. It’s an uncomfortable dissonance for the viewer. On one hand, it’s hard not to be impressed by the deviousness of her punishment (one never seen in K-dramas, so props to the writer for this!). And there’s the fact that Tae Nam is a monster who absolutely deserved the lesson. Still, it’s hard not to feel something at the sight of his terror. His aversion to everything related to his mother suddenly makes sense, as does his devotion to Bolt whom he sees as his only friend. Plus, it isn’t that Hwa Young is doing this out of some serious desire to rehabilitate her son. Rather, she wants nothing and no one to stand in her way of ascending through the military ranks. And, as it turns out, that’s not the only unsavory thing she’s willing to do to achieve that goal. 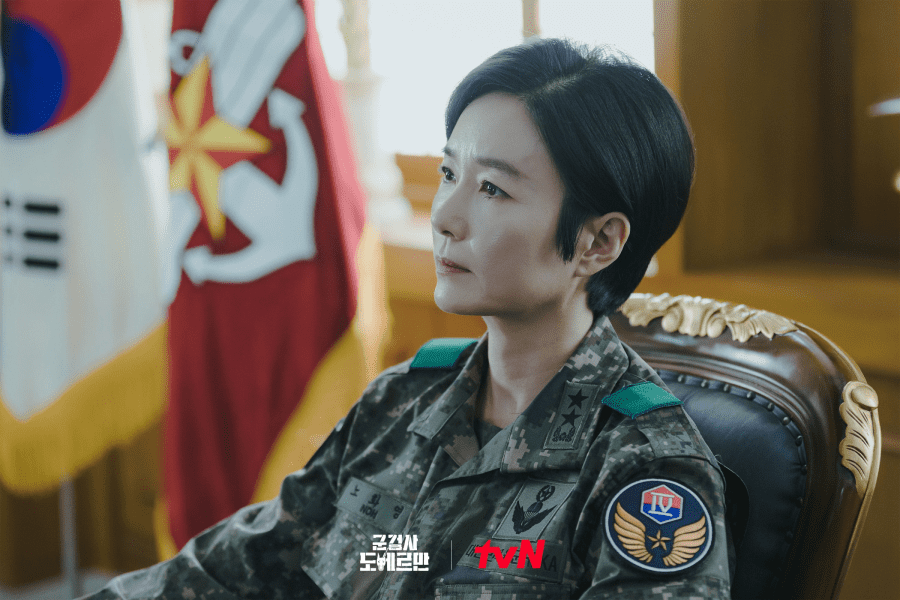 At first, it seems as though Cha Woo In (Jo Bo Ah) scored a win for her team by giving the video to the police and getting No Tae Nam arrested. However, upon speaking to Se Na (Yoo Hye In), Woo In discovers that Yong Moon Goo (Kim Young Min) manipulated the traumatized girl into defiance. Most dramas have the villains threatening victims with injury to their dear ones if they talk to the police, and the threats generally work. However, what’s interesting here is that Moon Goo operated on the belief that the threat to Se Na’s mom wouldn’t work, rather that it would make her so angry that she would immediately provide the video to the police. And that’s what Se Na did. The resulting backlash allowed Hwa Young to force her son into the military where she can keep a strict eye on him as she ascends to the next stage in her career, while Yong Moon Goo, ever loyal to her, gets to run IM Defense. It’s clever writing in that what we thought was a win for Woo In was actually a loss. But just what is up with IM Defense, and why is Hwa Young so willing to go to any end to keep control over it?

3. The truth behind the accident of Do Bae Man’s parents 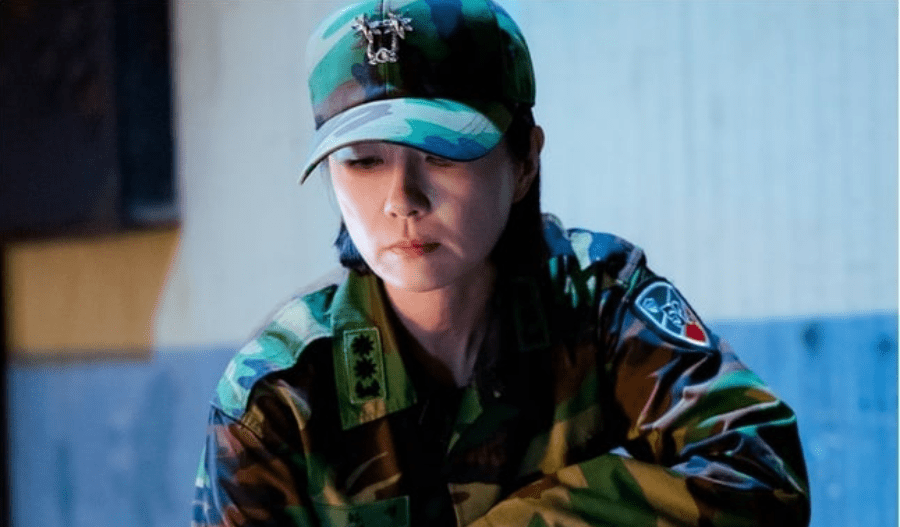 In the world of K-dramas, a car crash is never just a car crash. Thus, it was only a matter of time before the show would give us more about the accident that shaped Bae Man’s life. There wasn’t any real doubt that anyone but Hwa Young would be behind it, but it’s still chilling to watch her shortened finger swipe over the pulses of Bae Man’s parents and smile. Interestingly enough, it posits Bae Man and Tae Nam as quite similar. Both had a hatred for the military and anything to do with it because of Hwa Young, and both still ended up forced into wearing the uniform. Hwa Young evidently sought to remove Woo In’s father and Bae Man’s parents due to something related to IM Defence. At first glance it seems obvious enough that a defense contractor and military personnel would be acquaintances, but Bae Man hears that his parents were both investigators in the military, which I gather is an assistant position to a military prosecutor. Why would the investigators, and not the prosecutors themselves, be this close to the CEO himself? It’s a mystery Bae Man and Woo In are about to unravel. If Bae Man doesn’t unravel emotionally first. 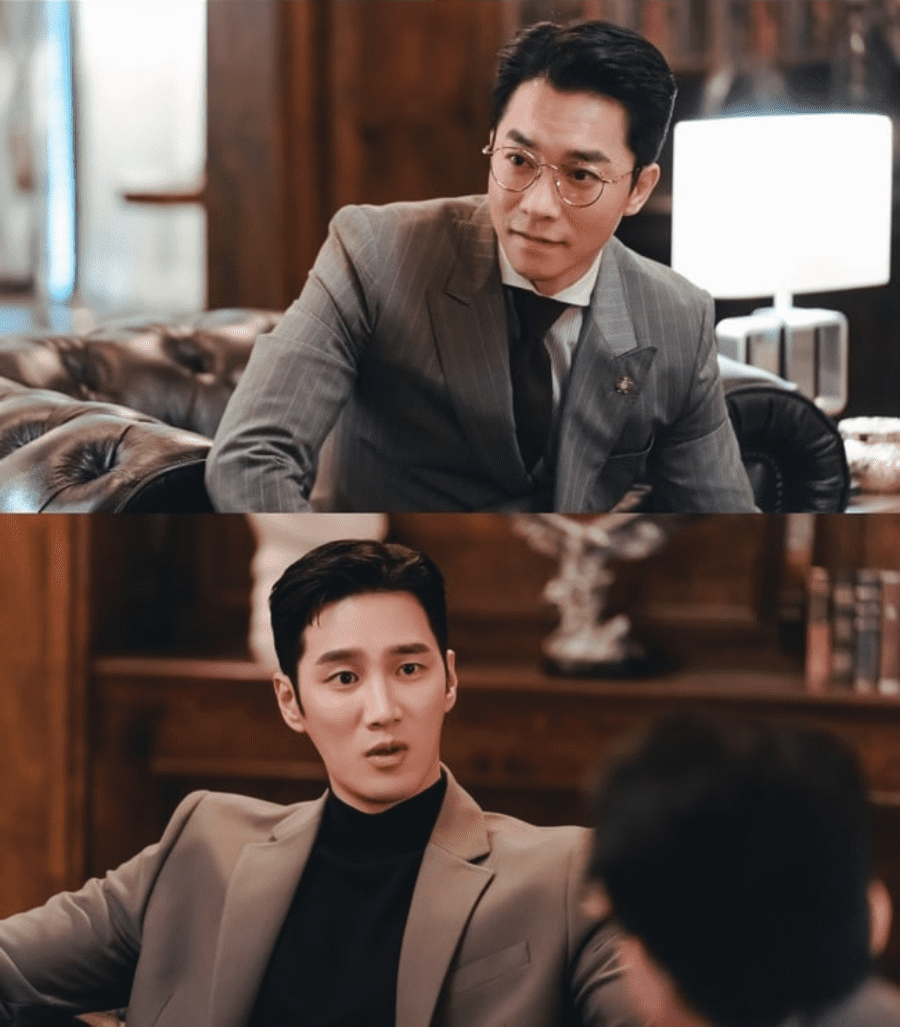 Last week it seemed that Bae Man’s morality appeared to be ambiguous, but this week shows exactly which side he’s on: the one that pays him. Unfortunately, Bae Man’s a rotten egg. We’ve seen him act all justice and mighty, like in the case of the sergeant he framed who actually turned out to be a murderer. There was also the alcoholic doctor who paralyzed a perfectly healthy young man and doomed another doctor’s future because he could (that one hurt to watch). But we’ve also watched Bae Man jump to the defense of a rapist and try to get another rapist out of military duty, so it’s pretty safe to say that he’s probably done worse over the years.

What’s surprising is his complete lack of cognitive dissonance. While Tae Nam genuinely doesn’t understand morality and doesn’t care to, Bae Man knows the difference between the two. The guy who flew into a fury when people disrespected him for being poor has become the very same. He has dinner with his police officer aunt every day, knowing that he’s the sort of person she’d put behind bars. And he doesn’t seem to feel guilty, not until his confrontation with Woo In. She sharply asks if he’s a just prosecutor or a smart one, but the truth is that he’s a dirty one. But he’s the one that Woo In needs, and she’s prepared to do anything to get him.

If Bae Man parallels Tae Nam, then Woo In parallels Hwa Young in deviousness. To force out Bae Man’s repressed memories of his parents’ accident, she recreates that accident. That’s a level of ingenuity and cruelty that Kang Yo Han from “The Devil Judge” would approve of in the best of ways. It’s wild that Woo In actually pulls this off. What if another car had turned onto that street? What if Bae Man had actually died? She had no way of knowing the size of the explosion let alone whether her team of two people would be able to cover it up. And to stand over him while he’s losing blood and pronounce victory, that’s a boss move. She lays her cards on the table, and Bae Man reacts badly.

But as his empire of corruption begins to crumble, it appears that Bae Man will soon realize that he has nowhere to go. He tried to leap over Yong Moon Goo and just lost everything, and Hwa Young has it out for him after he dared attempt to exempt her son from service. Civilian life is all that’s left to him, albeit without the glorious job prospects he once had. So, we’ll have to wait and see just what tempts Bae Man to return to the same cliff he fell from. He saunters in a month later at the start of Noh Tae Nam’s trial and vows to be Woo In’s hunting dog (okay, that was seriously attractive). This pits him directly against Yong Moon Goo, Hwa Young’s hunting dog, and all the people he’s made enemies of during his time as prosecutor. It also sets us up for one heck of a redemption arc. Here’s hoping all the good ones will be standing at the end because this is going to be a ride!