We’ve hit the halfway mark for “Military Prosecutor Doberman,” and the show slows slightly as Do Bae Man (Ahn Bo Hyun) and Cha Woo In (Jo Bo Ah) face the mother of all unexpected hiccups. This drama is so, so good at pulling the rug out from underneath the viewer, with twists and turns that manage to be both macabre and delicious. Faced with their first major setback, how will our determined duo respond? And are they prepared for just how low the monster they are fighting will sink?

It shouldn’t come as a surprise that someone as hotheaded as Woo In would have attempted to kill Noh Hwa Young (Oh Yeon Soo) earlier. What’s shocking is that she failed. Despite having the shot and being able to end her family’s nemesis in one blow, Woo In is unable to pull the trigger. She hides, sobbing. Her rationale is sound. It would be too quick, too easy an end for someone whose malice knows no bounds. Woo In couldn’t bring herself to give Hwa Young a hero’s death in the morning newspaper and ruin her own life in the process. Instead, she opts for the more painful route of tearing down Hwa Young’s legacy. This puts her at risk, prevents her from forming lasting friendships or relationships, and forces her to watch everyday as Hwa Young rises higher. It’s truly a testament to Woo In’s character that she’s grit her teeth and survived this far. But this has come with a cost.

As shown in her eerie stillness when soldier Kim Han Young (Kim Ah Seok) pulls out a gun to shoot the Mine Hero ,Won Ki Choon (Im Chul Hyung), Woo In seems to have PTSD. As difficult as it is for her, that past trauma is what allows her to see into Kim Han Young’s motivation. On the other hand, eternally cocksure Bae Man doesn’t notice a thing until Woo In points him in the right direction. It makes for a great dynamic to have the female character possess the richer backstory. And speaking of backstories, this week, our duo takes on someone whose story just doesn’t line up.

2. The Mine Hero’s fake leg 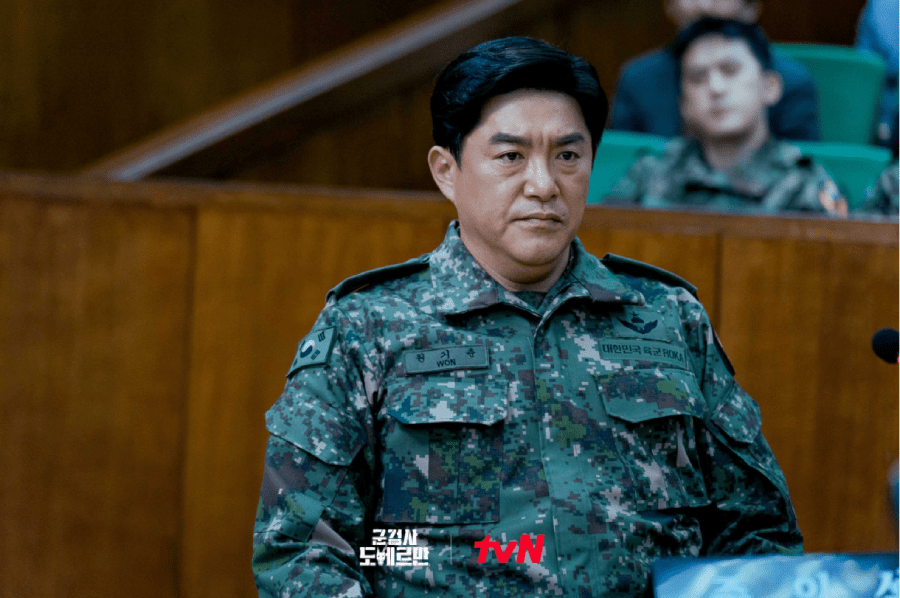 On paper, the Mine Hero’s story is a thrilling one: a real man’s man who dives into a minefield to save his subordinate and loses a leg in the process. Yet, upon closer look, something doesn’t add up. Why would a supposed minefield veteran lead his soldiers off the path into an area with live mines? Why did the brother of the man he supposedly saved try to kill him? Woo In sees through the cracks because she’s been in that position before and spearheads an investigation into the Mine Hero. What she finds could blow the military and Hwa Young right open: the Mine Hero never lost his leg. In fact, Won Ki Choon’s been dancing around with a fake prosthetic the whole time. She’s elated at the find, despite not being able to use the evidence she gathered from a hidden camera.

Bae Man is similarly excited. In fact, he’s so excited that he makes the mistake of telling Hwa Young that Woo In is investigating the Mine Hero. (Seriously, Bae Man? Why?) Hwa Young is immediately put on alert and takes drastic action in a way our duo couldn’t have predicted. At Kim Han Young’s trial, Woo In and Bae Man call Won Ki Chun before a sea of reporters. To prove his point, Bae Man smashes Won Ki Choon’s fake prosthetic and finds a steel rod where a leg should be. Yikes. 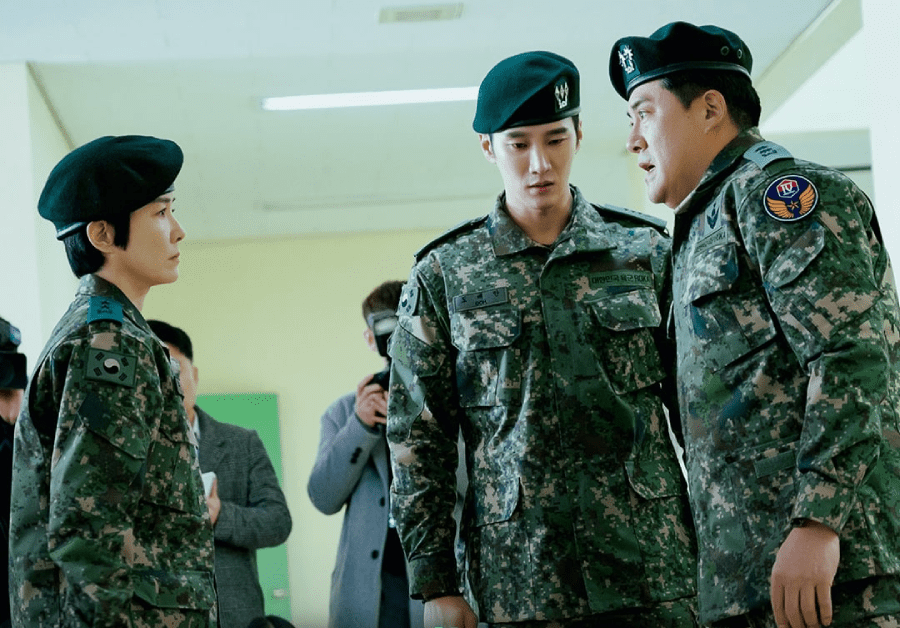 3. The Mine Hero’s missing leg

Smashing a military hero’s prosthetic leg on TV, only to reveal that he’s missing a leg after all, is a huge yikes. Bae Man and Woo In are both disciplined. The writing is great here as Bae Man is furious with Woo In, blaming her for dragging him down a rabbit hole and blaming himself for following her. Yet, when it comes down to punishment, Bae Man volunteers to take the bulk of the blame and is suspended for three months. Woo In is removed from all cases and is not allowed to leave the base. She’s despondent but Bae Man confirms that he’s still on her side as promised.

(Is this a romance? Because it should be)

After verifying that Woo In’s recording of Won Ki Choon’s leg being intact was not faked, Bae Man’s back in business and hunts down anything that can prove the Mine Hero’s duplicity and Hwa Young’s involvement in covering it all up. But they’re horrified when they discover just what the extent of Hwa Young’s involvement is. To ensure that no more scandal would bog down the military, she amputates Won Ki Choon’s leg herself, right before the trial! At this point, we’re dealing with more monster than woman. 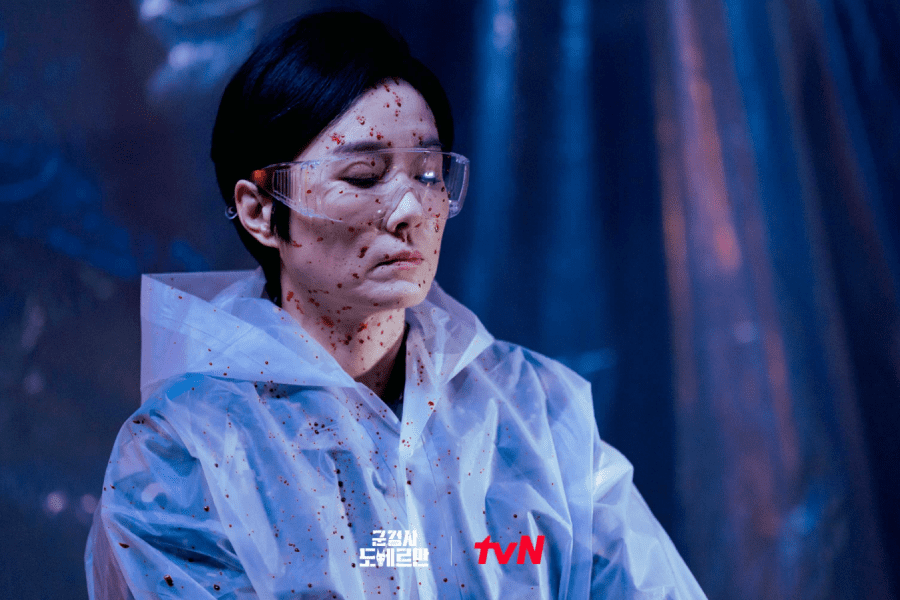 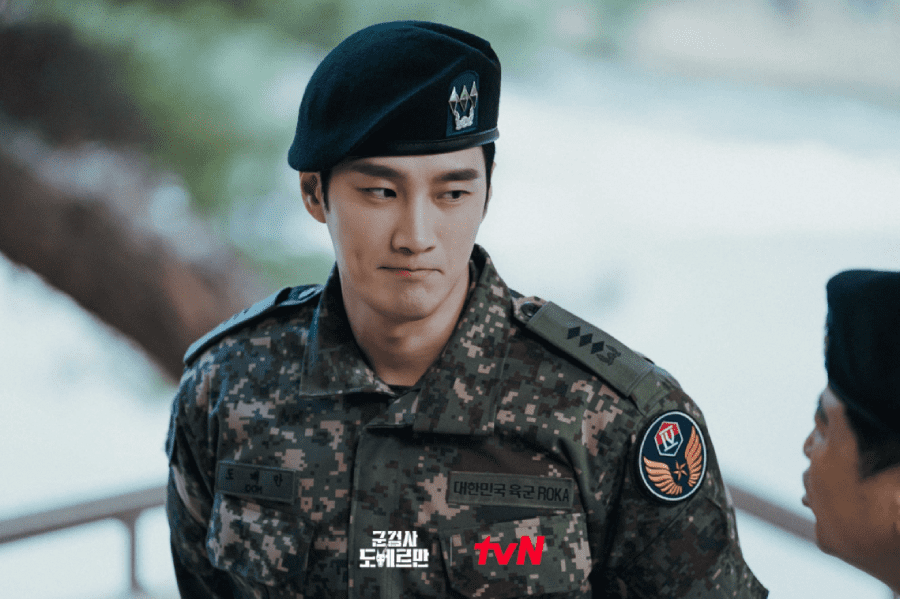 Bae Man can be surprisingly stupid (i.e. telling Hwa Young that they were coming for Won Ki Choon) but he’s equally brilliant. He somehow predicts that Hwa Young (for all her insistence that she didn’t want her son to be favored) would end up giving her son a slap on the wrist. And that is exactly what happens! It’s almost hilarious watching Bae Man and Woo In’s superior show such blatant differential treatment to Noh Tae Nam (Kim Woo Seok). He is let off with only a month of probation in the strictest of dorms. But his life isn’t going to be as easy as he imagines. Bae Man makes sure to inform the soldier that he framed (on Tae Nam’s orders) that it was Tae Nam who made him do it. Said soldier is now out for vengeance, and Tae Nam doesn’t even know what’s coming. Hopefully it’s more of this!

Now, this is the real shocker. Turns out that Woo In has a soft spot for dogs and couldn’t just leave poor Bolt to languish while Tae Nam was arrested. So she brought him home. However, with her currently not allowed to leave the base, that leaves only her confidants to take care of the dog. And her long-time conspirator (who seems to have a crush on her) is allergic to dogs, so that leaves Bae Man. He tries to refuse but one look from the dog has him relenting. 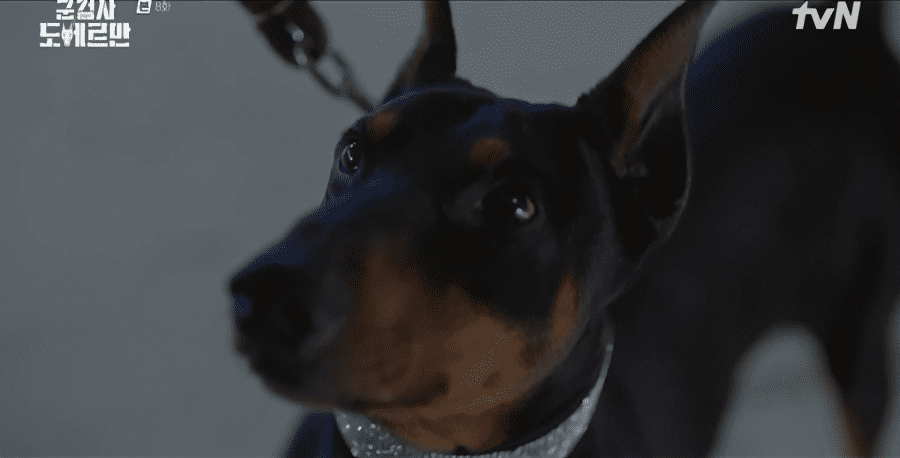 Who could resist those eyes?

Tae Nam is going to have a fit if he finds out. Imagine if Bolt turns against him? Now that would be poetic justice.

This week’s episodes really test our newly-minted duo. For people who became allies so quickly, the two don’t know much about each other. Thus, it only makes sense that they wouldn’t trust each other fully. Woo In oversees Bae Man’s interrogation of Tae Nam because she still has 1 percent of doubt that he’s actually on her side, and Bae Man blows up slightly at Woo In after the Won Ki Choon fiasco because he’s not sure she can actually oversee this revenge thing. They’re both people who aren’t prone to trust. Yet, despite all their wariness, some part of them innately trusts the other, which is why this duo works so well. On the other hand, there’s always in-fighting amongst the villains. Here’s hoping that our military prosecutors can put that to good use next week!