With only three weeks to go and many a villain to bring down, “Military Prosecutor Doberman” ups the ante by cutting down not one but two of the bad guys. But evil remains a hydra, and where our intrepid team cuts off a head, another two spring up in its place. Betrayal and conspiracy are the name of the game this week as enemies and allies switch sides. And yet, our favorite duo might have an unexpected ally in a very dangerous person.

1. The rise of Yong Moon Goo 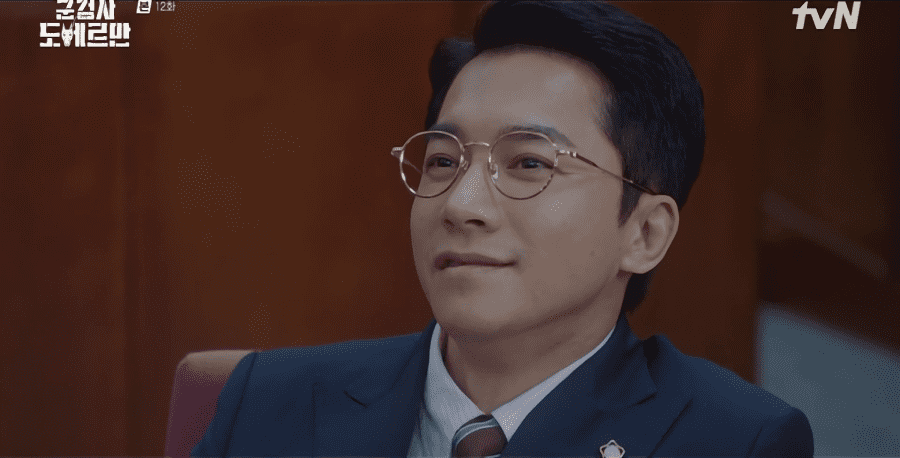 Yong Moon Goo (Kim Young Min) has proven himself quite the nasty little weasel, but he’s always been a weasel who jumped at Noh Hwa Young’s (Oh Yeon Soo) command. He’s been practically devoted to her for years. But for the past few episodes, the cracks have been showing that Moon Goo has more in his sights. Thus, things get interesting when he starts to show signs of personal ambition. The first indication is his private meeting with Hwa Young’s superior, the current Minister of Justice, Lee Jae Shik (Nam Kyung Eup). The second is his clandestine conversation with a long-time member of IM Defense, where he hints that the wheels of his plan have been in motion for the past six years. The show and Yong Moon Goo are keeping its cards close on just what he wants, but it’s plain that it’ll put him on the offensive against Hwa Young, and it seems to involve something to do with money. 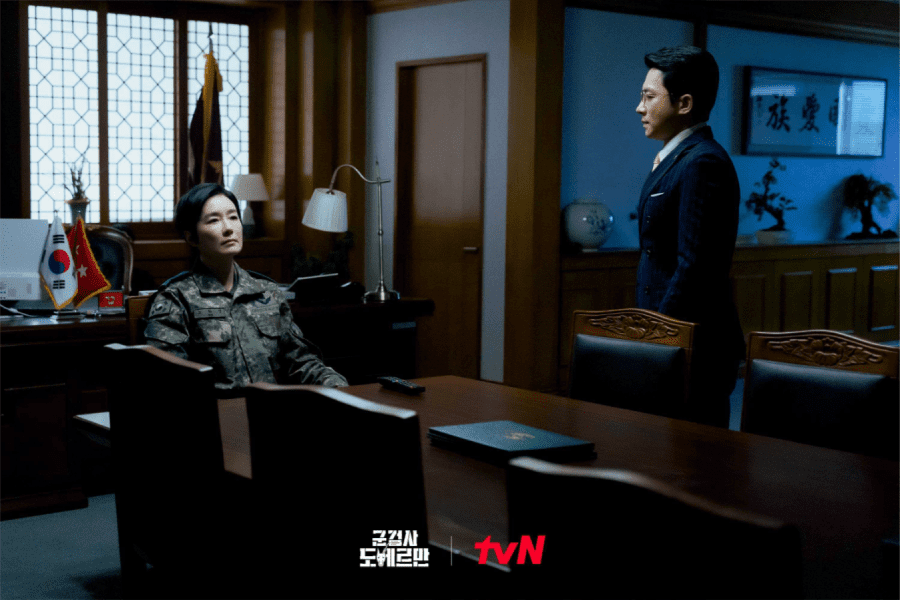 2. The fall of Kang Ha Joon 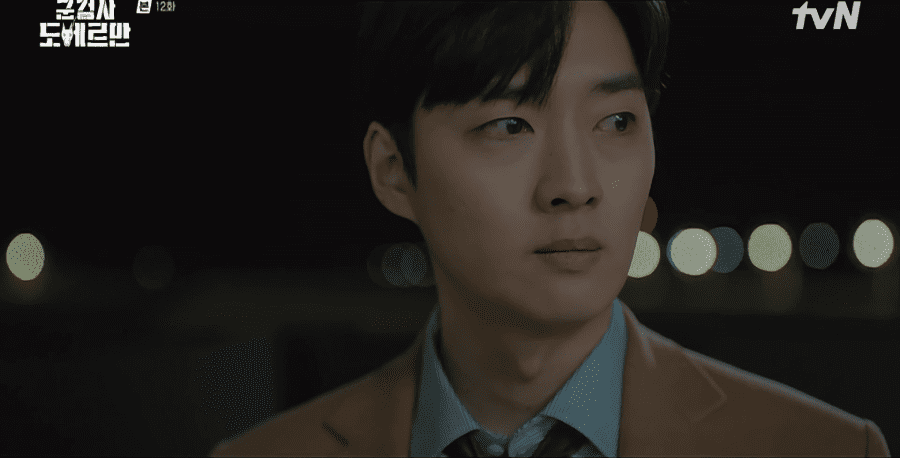 Now this was wholly unexpected. Kang Ha Joon (Kang Young Seok) has always seemed devoted to Cha Woo In (Jo Bo Ah) in the same way that Moon Goo was to Hwa Young. Plus, there’s the added bonus that he’s actually in love with Woo In. That sure makes for a strong motivator. Not that Woo In is aware of it, much to Do Bae Man’s (Ahn Bo Hyun) exasperation.

However, love is a double-edged sword, and Ha Joon finds out real fast when his budding tech company goes bust in days after Moon Goo drives down the stock price and buys up the company. Ha Joon orders him out when Moon Goo gives him “an offer he can’t refuse.” Yet something Moon Goo says seems to stick: that people like Ha Joon and Moon Goo shouldn’t have to tie themselves to the past any longer, and that military folks should be left to duke it out amongst themselves while Ha Joon and Moon Goo make money off the battles. Add to that Woo In’s evident closeness with Bae Man, and a mixture of jealousy and self-interest has Ha Joon switching sides in the span of an episode. Or he appears to at any rate. Hopefully, this isn’t really betrayal because that would devastate poor Woo In. Ha Joon seems to believe that Woo In takes him for granted, but he isn’t entitled to a romantic relationship with her just because he knew her longer. Here’s hoping this is all a ploy because right now, Ha Joon’s just given a crucial piece of evidence that could implicate Hwa Young over to Moon Goo. Yikes!

Bae Man’s always been the level-headed one, with Woo In being the one to run into a situation with her pretty eyes all maniacal. It’s a surprise this week when the tables are turned, and Bae Man, normally so collected during a trial, completely loses it at Hong Moo Seob’s trial. It’s evident that this trial means a great deal to him, as does the trust that the victim has placed in him after their messy history. But when a corrupt judge teams up with Yong Moon Goo and Hong Moo Seob to discredit all the victim’s evidence, Bae Man literally roars his outrage in the courtroom. Woo In has to step in to steer the trial back on track. It’s a nice reversal that shows they’re both learning from each other, with her knowing when to draw back now, and him now knowing when to fight. But Woo In saves her best curveball for the end, because no one could have seen this one coming.

4. Woo In and No Hwa Young’s unexpected team-up 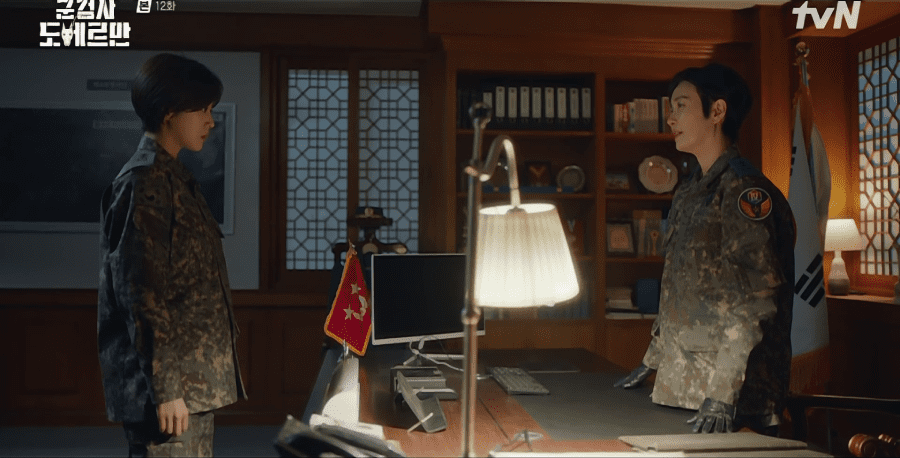 Say what you will about Hwa Young, she’s refreshingly to the point. After Bae Man’s disastrous outburst in court, Hwa Young knows there’s no winning this case. So she decides to give everyone a nudge in the right direction and calls Woo In over to propose a temporary truce to bring Hong Moo Seob down. There’s an interesting dynamic here as to the two women face off, with Hwa Young looking oddly taken with Woo In. There’s none of her usual hauteur as she tells Woo In that Woo In might see her as the enemy, but they could have had a very different relationship. Woo In doesn’t really want to hear it but is levelheaded enough to put aside her hatred so the victim can get justice. And it results in one of the best scenes of the whole drama. The villain and the heroine working together? Yes please! 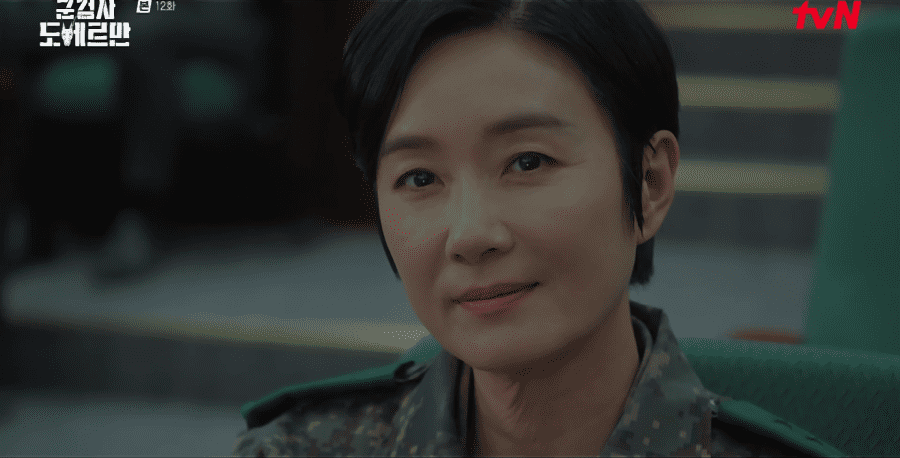 It turns out that Hwa Young’s witness is her aide Yang Jong Seok (Jo Hye Won), whom Hong Moo Seob assaulted when she rejected his sexual advances. As Hwa Young watches Woo In tear the man to pieces, there’s a smile in her eyes that’s strangely delightful. Of course, she’s enjoying this because that’s another political rival off her hit list, but there’s something so fun about seeing her this way. It makes her just likable to the point that I want the death of Bae Man’s and Woo In’s parents to be some sort of misunderstanding so that Hwa Young doesn’t turn out to be truly evil. 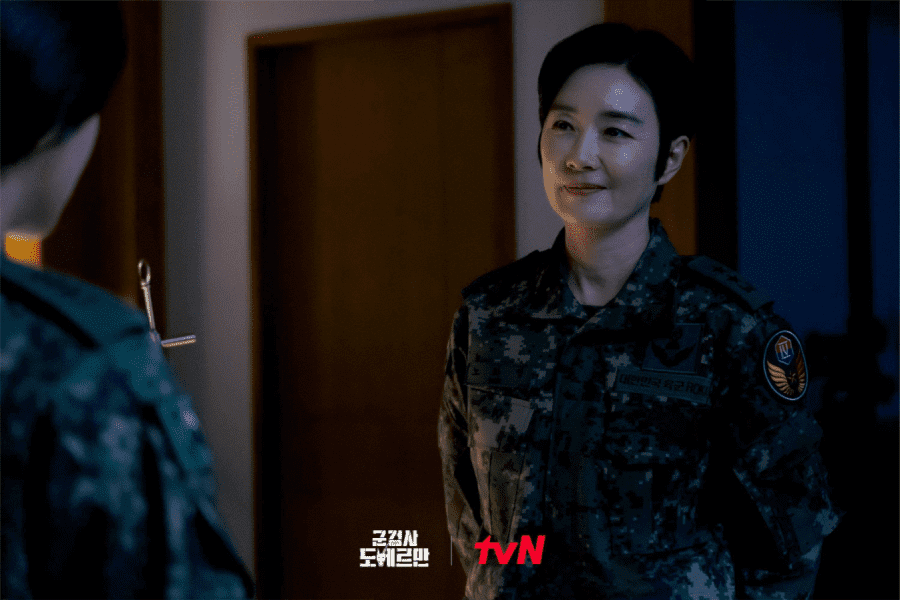 There is a slightly troubling aspect to Hwa Young’s characterization that bears mentioning as well. Hwa Young is consistently described and displayed in the context of a woman in a man’s world. She mentions it a good amount, specifically stating that she plans on stepping over all the men above her. This is a woman who wants to break the glass ceiling in the army and has made great way in doing so. However, the fact that a woman who holds feminist beliefs is this drama’s villain feels troubling. Especially as a lot of what she does is pretty slick albeit dark: shoving that misogynistic general’s head into a urinal, amputating the Mine Hero’s leg for real, and throwing her wastrel son a grenade. She values her subordinates as demonstrated in how she kept her promise to give Yang Jong Seok revenge. Plus, she’s also a stickler for the rules, unless her wastrel son is involved, and even then she only bent them and fully planned on making him pay for his misdeeds. Then again, Hwa Young plays her cards so close that we still don’t have the full picture of her character. There may be much more for us to discover just yet. 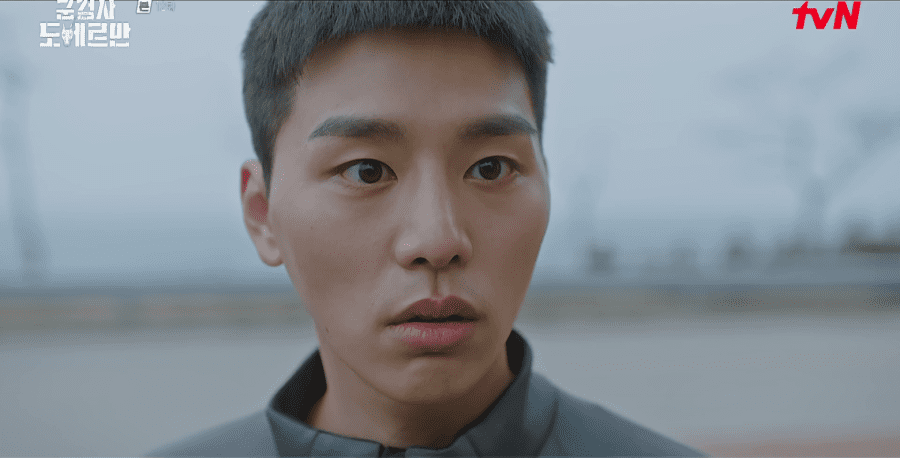 Speaking of the prodigal son, Tae Nam’s time on the front lines seems to have given him something that neither his mother, Yong Moon Goo, nor all the wealth and privilege he was raised in could: perspective. After witnessing what the previous gopher in the unit has had to do and continues to be forced to so, Tae Nam seems to be growing some semblance of a conscience, especially when the gopher befriends him. He visibly feels bad when the former gopher is punished in his stead, and he is horrified when the man is sexually assaulted on a regular basis. This show really doesn’t shy away from how horrendous the military can be. With all those men cloistered on a base far from home, tension runs away and is often released in the worst of ways.

When Tae Nam finds that the bank president’s son that he put away is the soldier who’s been acting so nice to him, he’s petrified that he’ll soon have to endure what the former gopher does. Perhaps this fear is what results in the horrific cliffhanger we’re left with at the end of this week where the bodies of Tae Nam’s unit litters the hallways, and we see a visibly shaken, bloodied Tae Nam with a gun in his hand. 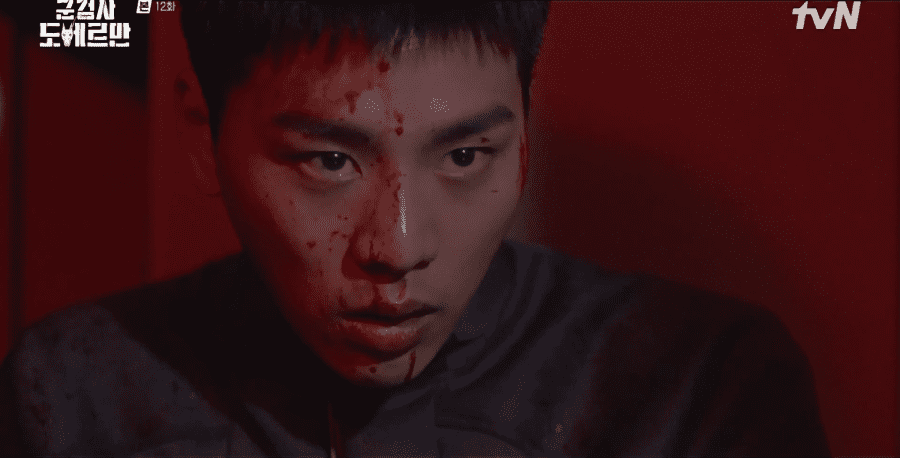 What a week it’s been! “Military Prosecutor Doberman” nailed it in both pacing and writing, tying in the takedown of a Patriotic Society member with major shakeups in the villain hierarchy itself. Our good guys aren’t unscathed either, with Woo In and Bae Man winning the trial, but in the dark as to Ha Joon’s deception. With four episodes and four villains left to go, it looks like this show just might pull off everything it wants to achieve and more! Let’s hope it also acts on the tension it’s been building between Bae Man and Woo In, because this shouldn’t go to waste!