“Military Prosecutor Doberman” is on its penultimate week, and for once Do Bae Man (Ahn Bo Hyun) and Cha Woo In (Jo Bo Ah) take a backseat as we take a look at the infighting amongst the Patriotic Society and what that means for our enigmatic villain, Noh Hwa Young (Oh Yun Soo). Everyone’s tiring of the game at this point as the fallout from last week’s round of betrayals continues. Foes become friends and vice versa, yet, there’s no time for pausing to clear the air, as the show turns up the pacing by bringing back an old favorite who seems to be rediscovering his humanity and remains Hwa Young’s Achilles heel. And when the air clears after this battle, only a few will be left standing. 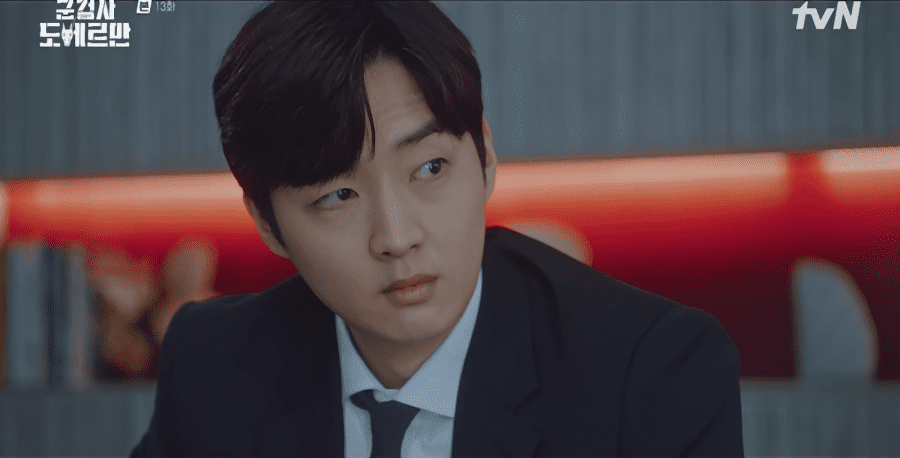 Kang Ha Joon (Kang Young Seok) appears to have jumped ship at warp speed. He goes from selling out Woo In and Bae Man’s biggest weapon against Hwa Young to literally informing them of the secret dossier containing all the Patriotic Society’s dirty secrets (dubbed the “X File”) which he didn’t even mention to his former comrades. He frames it as having had enough and being weary of the endless fight against the powerful and corrupt, which is valid. He thinks that Woo In has Bae Man now and doesn’t need him (because one man apparently replaces the other) and that surely all the work he’s done so far repays his debt to her dad (sure, but actively working against his daughter to doom her doesn’t!). There is a question of how far Ha Joon has gone to the dark side, and if he has done so at all, because he seems a little too quick at throwing out secrets. Only the finale will tell. 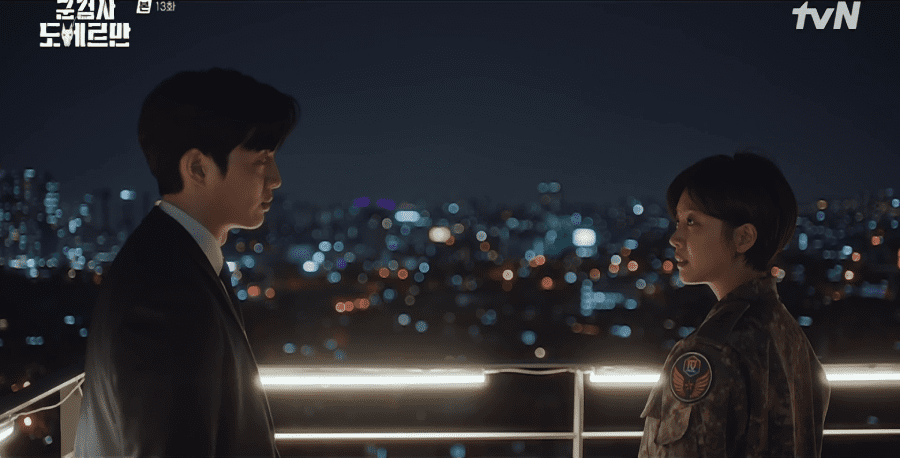 For now, Yong Moon Goo (Kim Young Min) couldn’t be more delighted at this turn of events and by the fact that the file remains unknown to Hwa Young. Upon hearing that Noh Tae Nam (Kim Woo Seok), of all people, might be aware of the file’s whereabouts, he goes to hunt him down. But tragedy has struck there first. 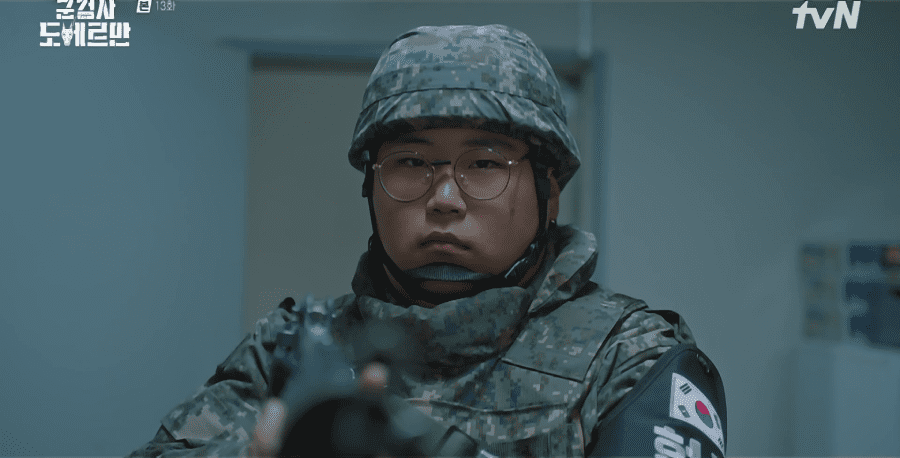 We’ve seen Pyun Sang Ho (Kim Yo Han) struggling through life in the military for weeks now. At first, Tae Nam categorizes him as an idiot and watches agape as the man just takes the insults hurled at him, then he is aghast when he realizes that the abuse isn’t just mental but extends to sexual assault. Tae Nam’s grown surprisingly close to Sang Ho and shown real empathy for the other man. He cares when Sang Ho is bullied and tries to help him whenever possible, even down to taping his broken glasses for him. Perhaps it’s because Sang Ho is the only one who was nice to him, but people have definitely been good to Tae Nam in the past and likely paid for it. This was a different sort of bond. Two outcasts against an entire platoon. The show’s message on the military is slightly muddied in the sense that it’s this toxic environment that allows Tae Nam to grow a conscience. But it’s the same environment that destroys Sang Ho physically and mentally. It’s to the point where when his chief abuser, Sergeant Ma (Jang Young Hyeon), threatens to go hurt Sang Ho’s disabled mother, Sang Ho loses it and massacres over half his squad. Only a seriously-traumatized Tae Nam is left alive. 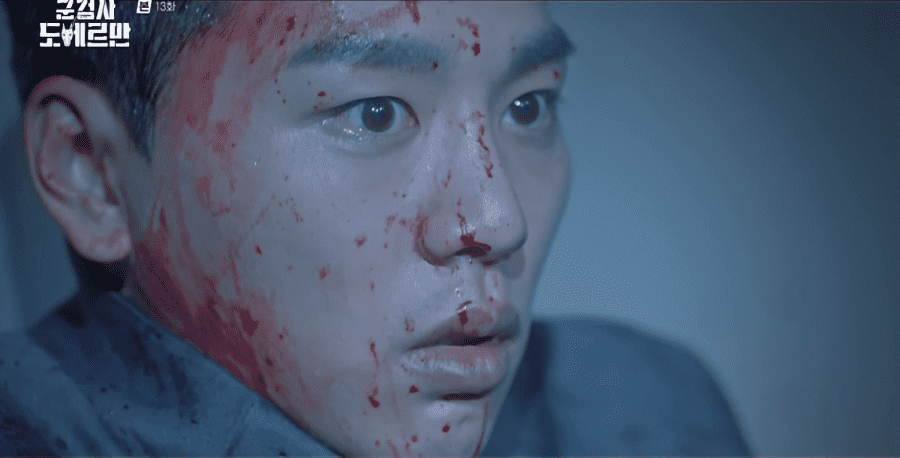 It’s a horrific look at what happens when systemic abuse runs rampant. It’s hard to call the dead “victims” as they experienced only a minuscule fraction of what they put Sang Ho through. Nevertheless, the law treats even abusers as having rights, and how the law will fall now hinges on the most unlikely person: Tae Nam. 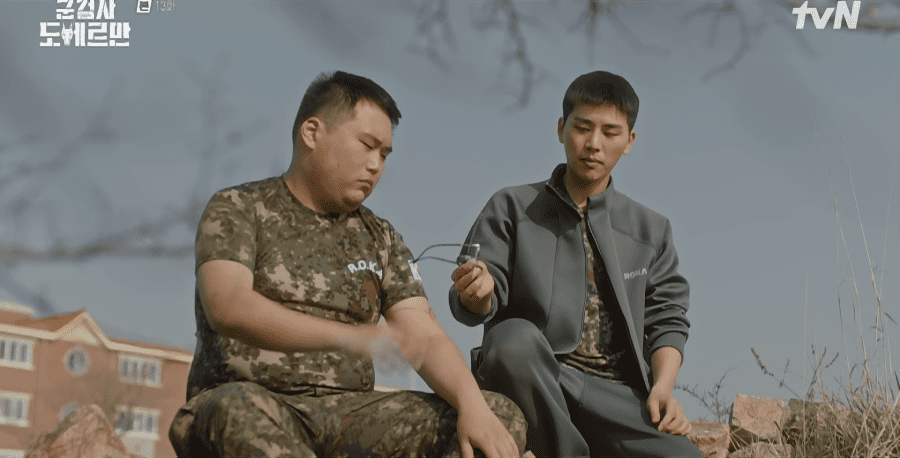 Tae Nam is in the unique position of understanding both sides of the coin here, as oppressor and victim. Having seen what Sang Ho went through, he understands the resulting fracture in the other man’s psyche. Yet, there’s something about that visceral violence that takes Tae Nam back to his worst moments: holding a grenade while his mother saunters off to teach him a lesson. Disobeying her request to keep the bullying matter all hushed up would result in a lifetime of suffering, like Sang Ho without an end date in sight. 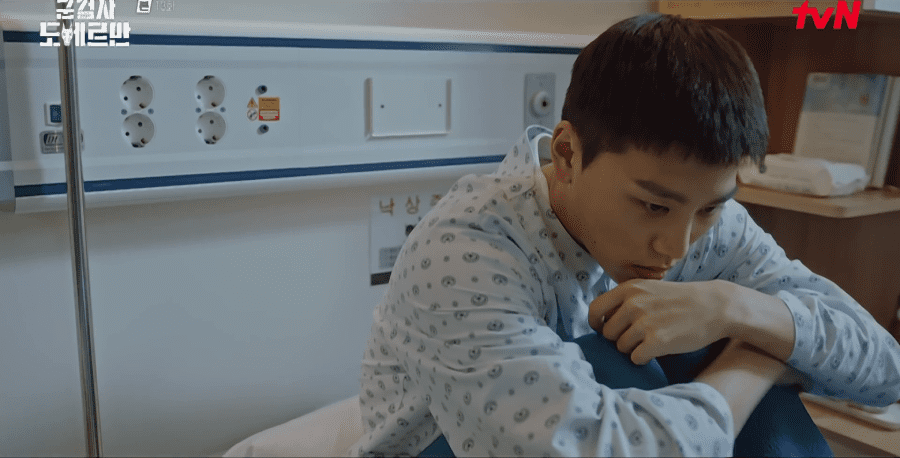 So when Woo In and Bae Man initially query him as to whether there was bullying within the platoon, a fearful Tae Nam denies it. He huddles by himself all the way to trial, as Private Ma (who remains disgustingly shameful) and the other injured soldiers continue to act as though they did nothing wrong. Yet, at trial, hearing the entire platoon mock and berate Sang Ho as an ungrateful psychotic man breaks Tae Nam in two. And the same Tae Nam who thought nothing of seeing his friend drug and rape a girl stands up for Sang Ho against his mother and his platoon. 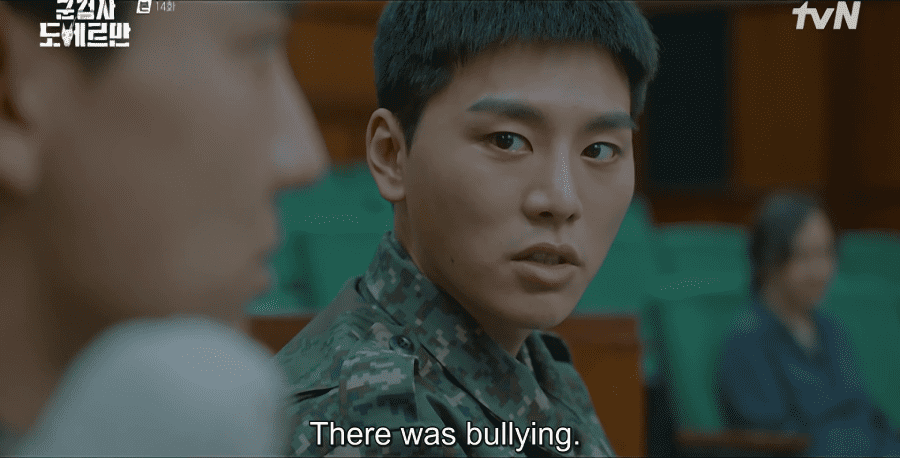 Still, the day doesn’t end in justice. Sang Ho is sentenced to death while the bullies who destroyed him are merely arrested. And though the show posits that Tae Nam’s time in the military truly has taught him a lesson (thus equating the army to prison) and reformed his character over the course of a few short weeks, this arc nevertheless, falls flat. Because while we see Tae Nam understanding Sang Ho, true change requires an acknowledgement of fault, and Tae Nam has never acknowledged his pre-military crimes. He literally assisted in and filmed a rape, but we never even see him thinking that it was wrong. Perhaps we’ll get this in the final episodes, but until then, Tae Nam still isn’t one of the good guys. But honestly, who is in this show? Perhaps just Woo In. 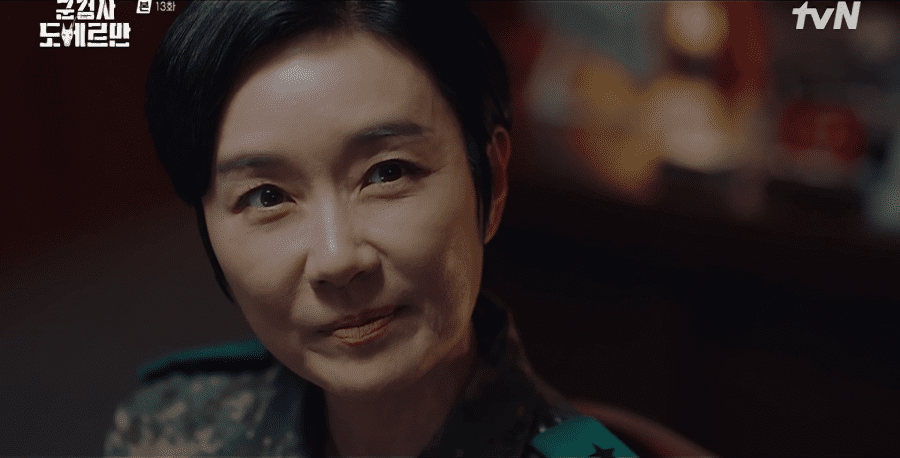 Hwa Young enjoys the most tumultuous day of her life, going from a victory lap to being fired, to forcing her former boss-now-enemy to retract his dismissal. As the Patriotic Society officially implodes, everyone goes at each other with all ammunition on the table. Minister Lee Jae Shik (Nam Kyung Eup) discovers this the hard way when he attempts to fire Hwa Young from her position. All she has to do is fish out the little recording she made years ago confirming his acknowledgement of their shared crimes, and the Minister knows he’s done for. Hwa Young comes out swinging, but deep down, she knows that she’s doomed unless the trial proceeds in her favor. She’s relieved when Tae Nam lies at first but strangely takes no steps to ensure that this remains the case. Really though, why? Since when has Tae Nam ever done what his mother wanted? Why didn’t she expect him to do something stupid last minute? The show seems to be trying to say that if she was a better mother who’d looked into how her son was doing on base and made time for Tae Nam’s calls, that she wouldn’t have been surprised at this betrayal. But Tae Nam was never that great a human being, so this is really a situation where everyone’s equally awful. 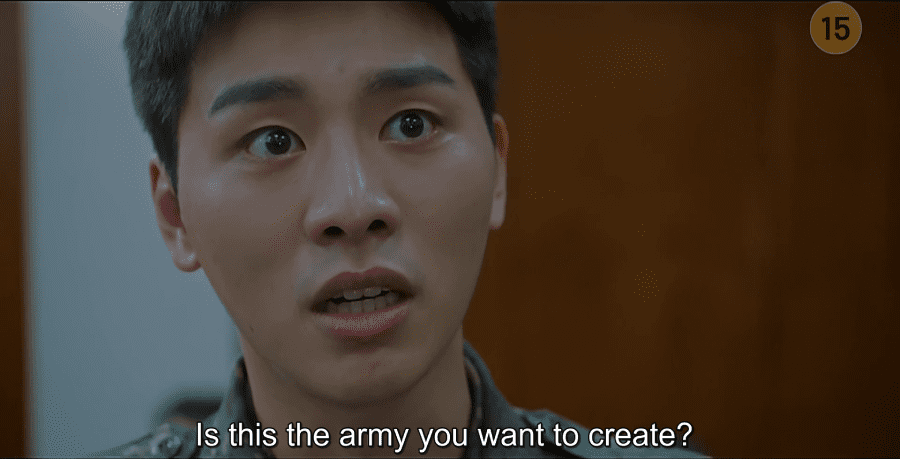 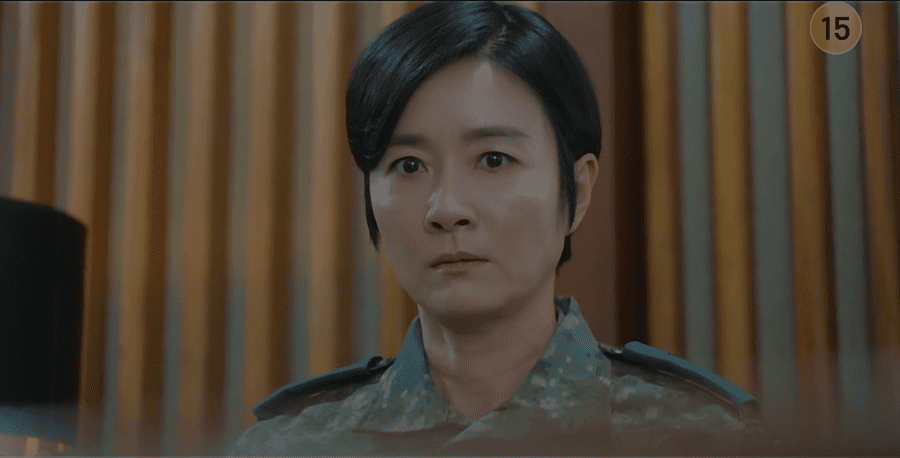 With Hwa Young’s career in shambles after Tae Nam blurting out the truth at trial, Woo In and Bae Man finally have all the ammunition they need to formally investigate her. Not that she seems too fussed, because Hwa Young always has something else up her sleeve. 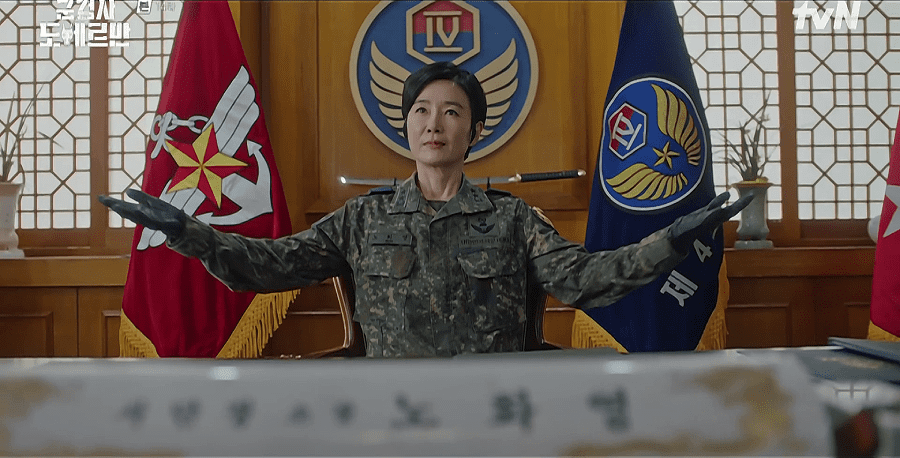 Speaking of secrets, the show continues to hide just how Hwa Young knew Woo In’s father. Woo In’s certain that the two barely knew each other, as her father didn’t have any pictures of them together. But Hwa Young’s keepsafe photo says otherwise. It’s one last trick the show has in its arsenal as it runs for the finish line. So, as our prosecutor pair heads into its final battle next week, the only question that remains is whether they’ve set the stage to win.