JTBC’s “Forecasting Love and Weather” has been keeping viewers swooning every week with memorable ending scenes!

The plot has been moving forward at a rapid pace with the following episode endings that caught the attention of viewers:

The ending that threw everyone off-course

From fighting over whether it will rain or not in one moment to finding themselves waking up in the same bed the next, Jin Ha Kyung and Lee Si Woo’s relationship progressed at an unexpectedly quick rate. It set the tone for how unusual the storyline of the drama would prove to be. Plus, this scene revealed a lesser known side of Lee Si Woo, one very different from the innocent happy-go-lucky type of guy everyone knew him to be. Unlike Jin Ha Kyung, who was very flustered about the night they spent together, Lee Si Woo was nonchalant about the whole situation. Jin Ha Kyung tried to convince him to keep things a secret, especially since he would be leaving the headquarters soon. However, he happily responded that he had officially received orders to permanently work at the headquarters. He added, “Let’s do this nicely, like adults.”

The ending that finally cleared the air

Following this incident, the two decided to continue just as is as general manager and special advisor. Jin Ha Kyung went to far lengths to make sure there was a line between the two that shouldn’t be crossed. She did this by assigning Lee Si Woo enormous amounts of reviewing and research to get through, causing their team members and the viewers to believe that she was treating him unfairly. However, the ending that followed revealed that this wasn’t the case at all. Once the fog cleared up, it soon became apparent that these acts of “poor treatment” were in fact cover-ups for the love signals they were sending back and forth.

The ending that gave viewers hope

Of course, there is meant to be turbulence in any relationship, but if those involved stick through it like Jin Ha Kyung and Lee Si Woo did in this ending, there might be hope. When Jin Ha Kyung visited a motel to drop off her drunk boss, she ran into the last person she would have wanted to see at a motel – Lee Si Woo. Reminded of the past pain from her previous relationship, she caved in and told her boyfriend that she’d like to take a break from the relationship. But she soon changed her mind when Lee Si Woo opened up about his family background with details about his gambling-addict father. He confessed that he couldn’t bring himself to tell her the truth when they saw each other at the motel because he didn’t want to put the weight of his troubles on the person he loved. As someone also with trauma related to her father, Jin Ha Kyung accepted his explanation and genuinely comforted him. The episode ended with her making Lee Si Woo the offer of moving in, saying, “Let’s stay together.”

The ending that really had everyone’s hearts melting

Jin Ha Kyung’s and Lee Si Woo’s hearts for one continuously grew until one day when Jin Ha Kyung got into a car accident on the way to work. She first called her boss, then due to inevitable reasons had to walk into work with her ex-boyfriend Han Ki Joon (Yoon Bak). When Lee Si Woo saw this, he was enraged. He was already hurt that he wasn’t the first person she had called and that she hadn’t responded to his messages. However, Jin Ha Kyung caught on quickly and explained to him exactly why she had to get involved with Han Ki Joon. She also promised that from that point on, she would tell him everything. At this, Lee Si Woo let out the final blow that had all viewers in a trance, saying, “Oh no, this is not good. I keep falling for you more and more, Jin Ha Kyung.” 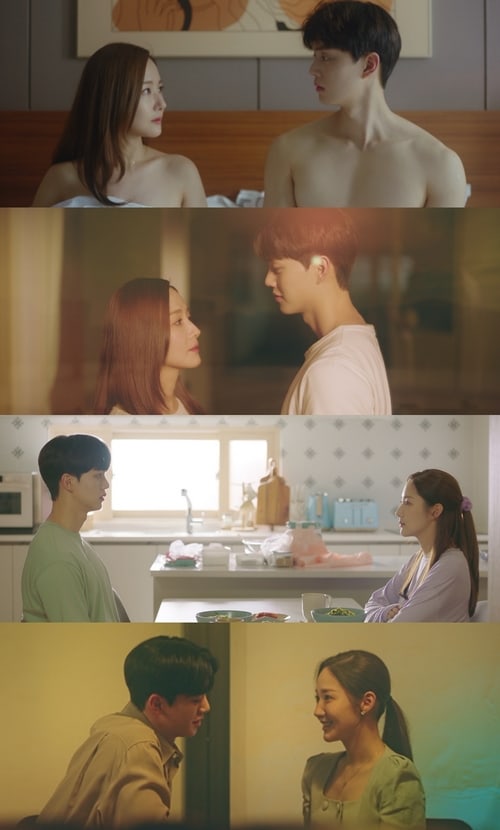 “Forecasting Love and Weather” airs every Saturday and Sunday at 10:30 p.m. KST.

In the meantime, watch Park Min Young in “I’ll Go to You When the Weather is Nice” below: