In February, Golden Child held their third solo concert where Daeyeol shared with fans that he would soon be leaving to complete his military service. Daeyeol is the first Golden Child member to enlist.

On March 21, Golden Child’s agency Woollim Entertainment revealed that Daeyeol would enlist on March 29 as an active duty soldier. Read their statement below:

Hello. This is Woollim Entertainment.

This is to inform you about the military enlistment of our agency artist Golden Child’s Lee Daeyeol.

Lee Daeyeol plans to enlist this coming March 29, 2022, as an active duty soldier in the 3rd Infantry Division.

We ask for your understanding that we will not hold a separate event on the day of his enlistment to prevent the spread of COVID-19.

Additionally, taking into account that it is a space shared with many other military soldiers, visits from fans have been prohibited, so please refrain.

We ask for fans’ warm support and encouragement for Lee Daeyeol who will diligently complete his mandatory military service and return with a healthy image.

In addition to the agency’s statement, Daeyeol shared a handwritten letter to address the news to fans. His letter reads as follows:

Our Goldenness, you’ve been well, right?! One season’s cold weather has gone by and I think it’s becoming a bit warmer these days.

I think it’s been awhile since I’ve greeted you through a letter, but the reason for this is because I wanted to let Goldenness know that I was enlisting in the military on March 29.

A month has already gone by since I announced my upcoming military enlistment with a surprise event from Goldenness at our last concert and I now have a little over a week left until my enlistment.

I plan to quietly complete my mandatory military service with a calm mindset.

With the sincerity and responsibility I’ve gained from my long trainee period and my life until now as Golden Child’s leader, I think I’ll be able to complete my mandatory military service well! After my long six-year trainee period, I debuted on August 28, 2017. Although I was a leader that was lacking in a lot of ways, thanks to the love and support from Goldenness, I was comforted both when I was happy or having a hard time and I’ve made precious memories.

I will be careful so I don’t get hurt so please support the nine members of Golden Child while I’m away in the military. More than anything, don’t get hurt, be careful of colds, and I hope you stay healthy.

I will do my best for my mandatory military service!

I will miss you Goldenness♡

Thank you for leaving me with so many good memories. I will always remember them.

I will return carefully! From, Daeyeol 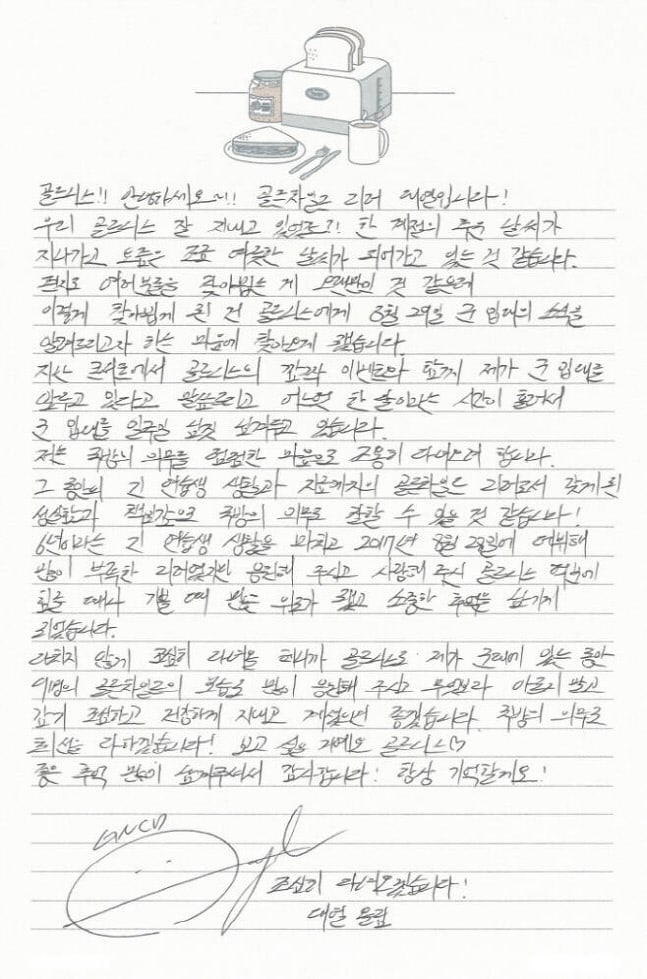 Golden Child
Daeyeol
How does this article make you feel?