tvN’s “Kill Heel” has shared a sneak peek of an epic company dinner that’s certain to be fodder for the rumor mill!

“Kill Heel” is a new drama about the fierce battles waged by three ambitious women in the competitive world of home shopping networks. Kim Ha Neul stars as show host Woo Hyun, who strives to escape her stagnant life by becoming the top host at UNI Home Shopping, while Lee Hye Young stars as UNI Home Shopping executive Mo Ran, who climbed from humble beginnings to reach the top. Kim Sung Ryung stars as the elegant Ok Sun, a top show host married to a famous politician who seems to have the perfect life.

On the previous episode of “Kill Heel,” Woo Hyun shocked everyone at the network by making a triumphant comeback after her on-camera breakdown. Meanwhile, Mo Ran attempted to make use of UNI Home Shopping president Hyun Wook (Kim Jae Chul)’s newfound interest in Woo Hyun by asking her to convince him to agree to creating a subsidiary company. However, to her surprise, Woo Hyun boldly refused to become her puppet, piquing viewers’ curiosity as to how the relationship between the two women might change in the future.

In newly released stills from the drama’s next episode, Hyun Wook and Mo Ran catch the UNI Home Shopping employees off guard by unexpectedly joining them during what was supposed to be a relaxing company dinner. However, it appears that nothing can get in Hyun Wook’s way when it comes to Woo Hyun, and after he arrives at the dinner, he is unable to tear his eyes off her for a single second.

Notably, in contrast to the aloof, slightly uncomfortable demeanor she previously displayed around Hyun Wook, Woo Hyun returns his attentions with a warm smile as they toast with their wine glasses. The change in her gaze and manner suggests that her mindset and feelings may have changed—and as Mo Ran shrewdly watches the couple interact from the sidelines, she seems certain not to miss a single detail. 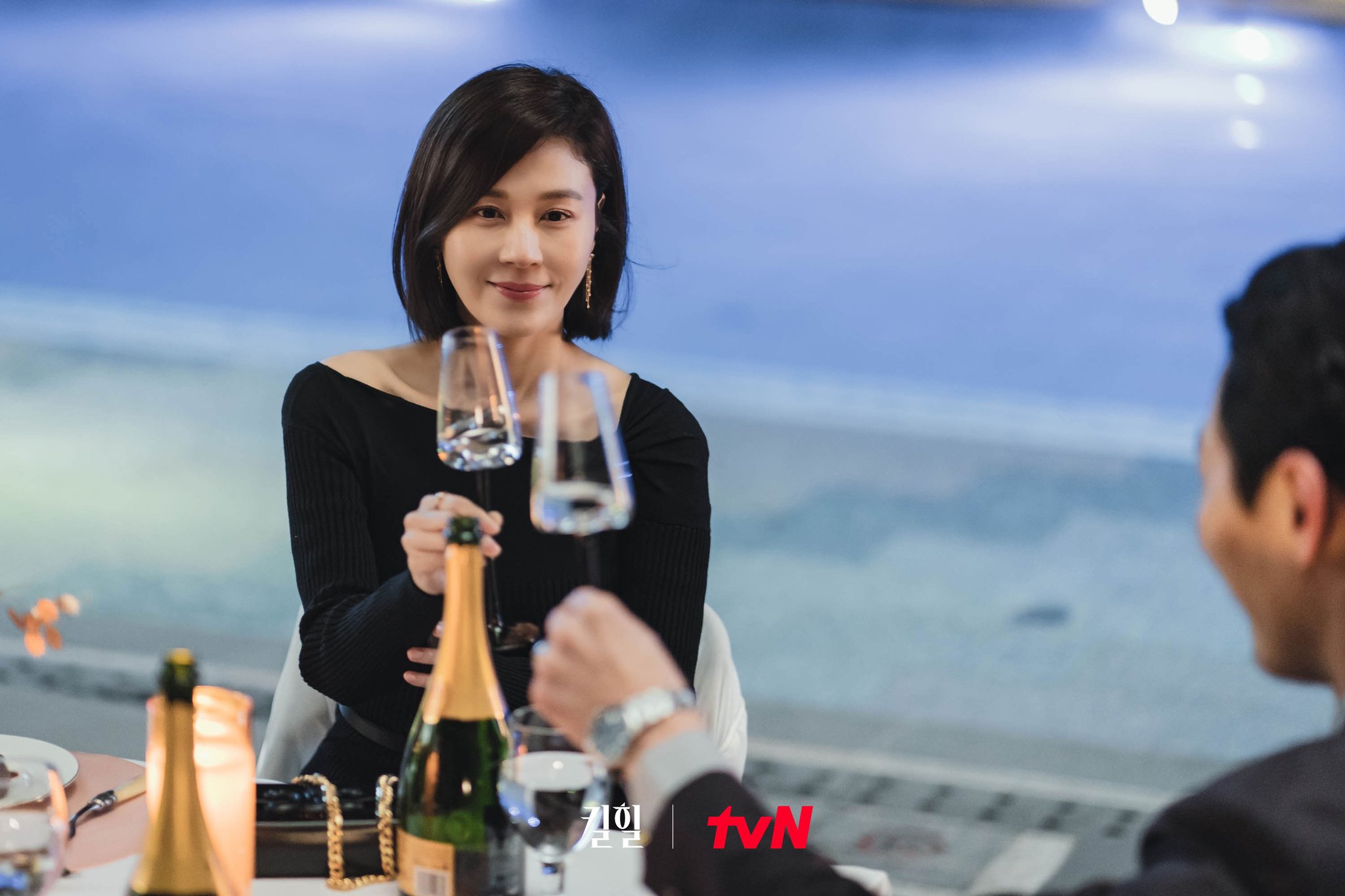 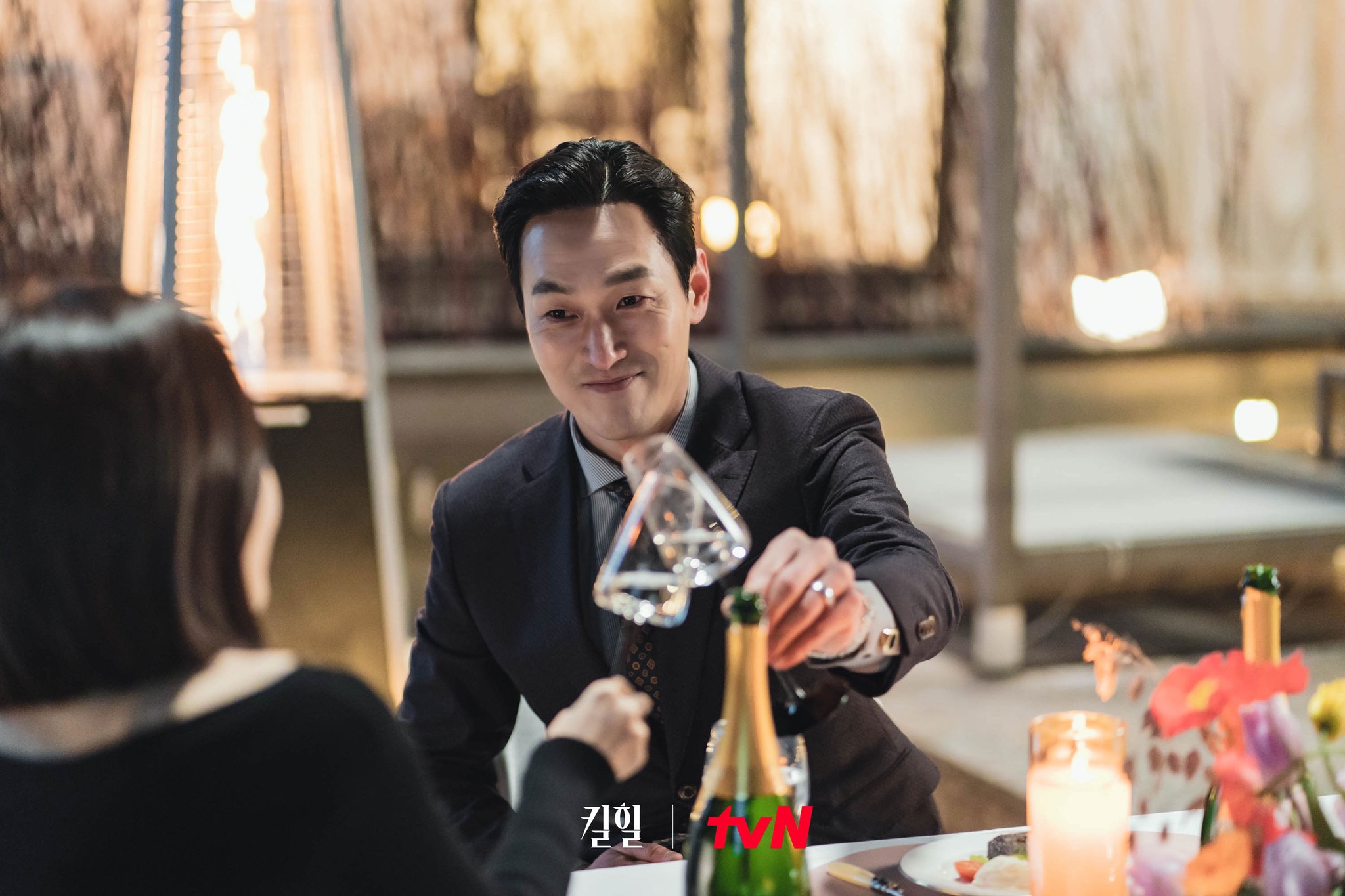 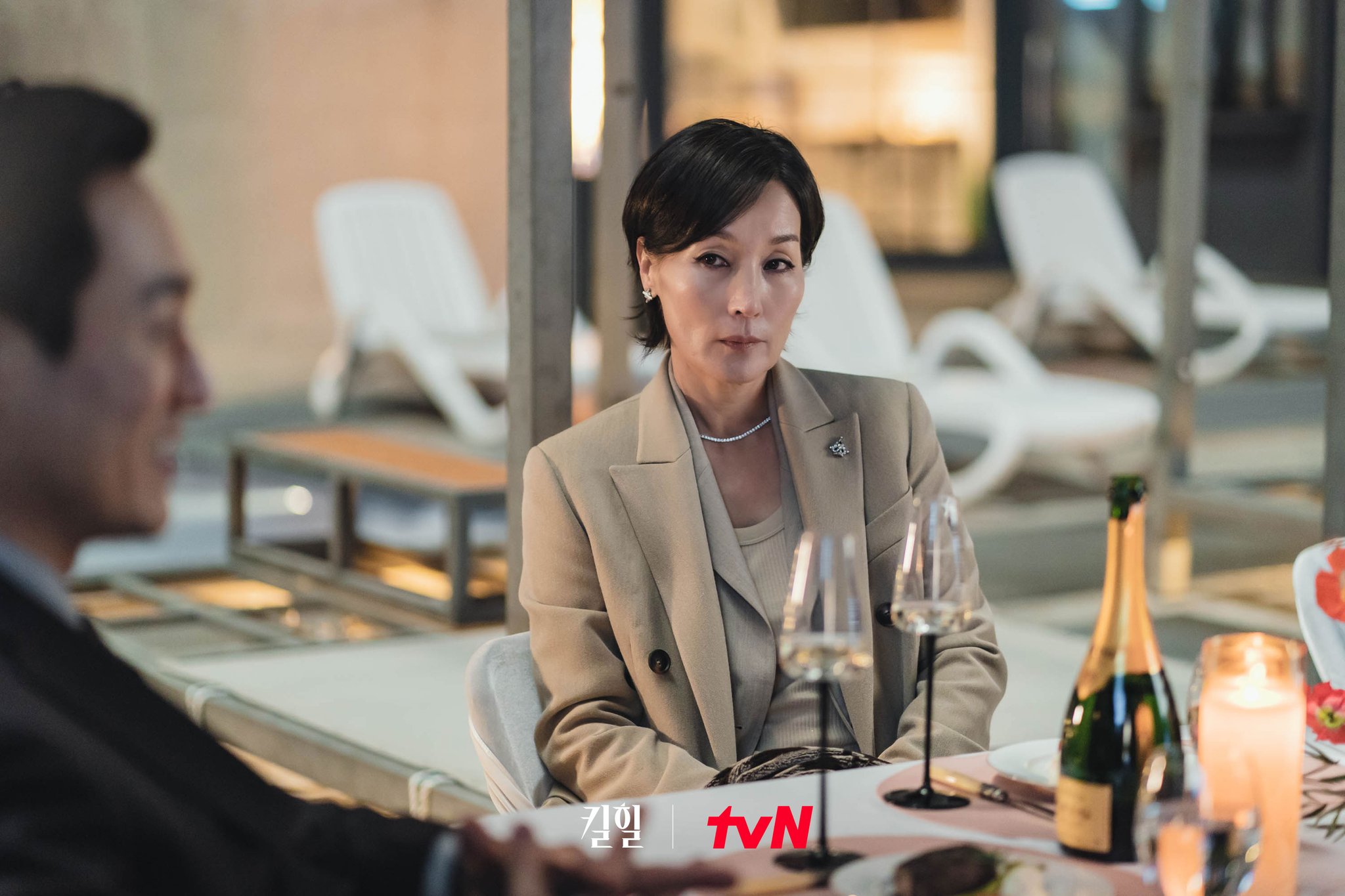 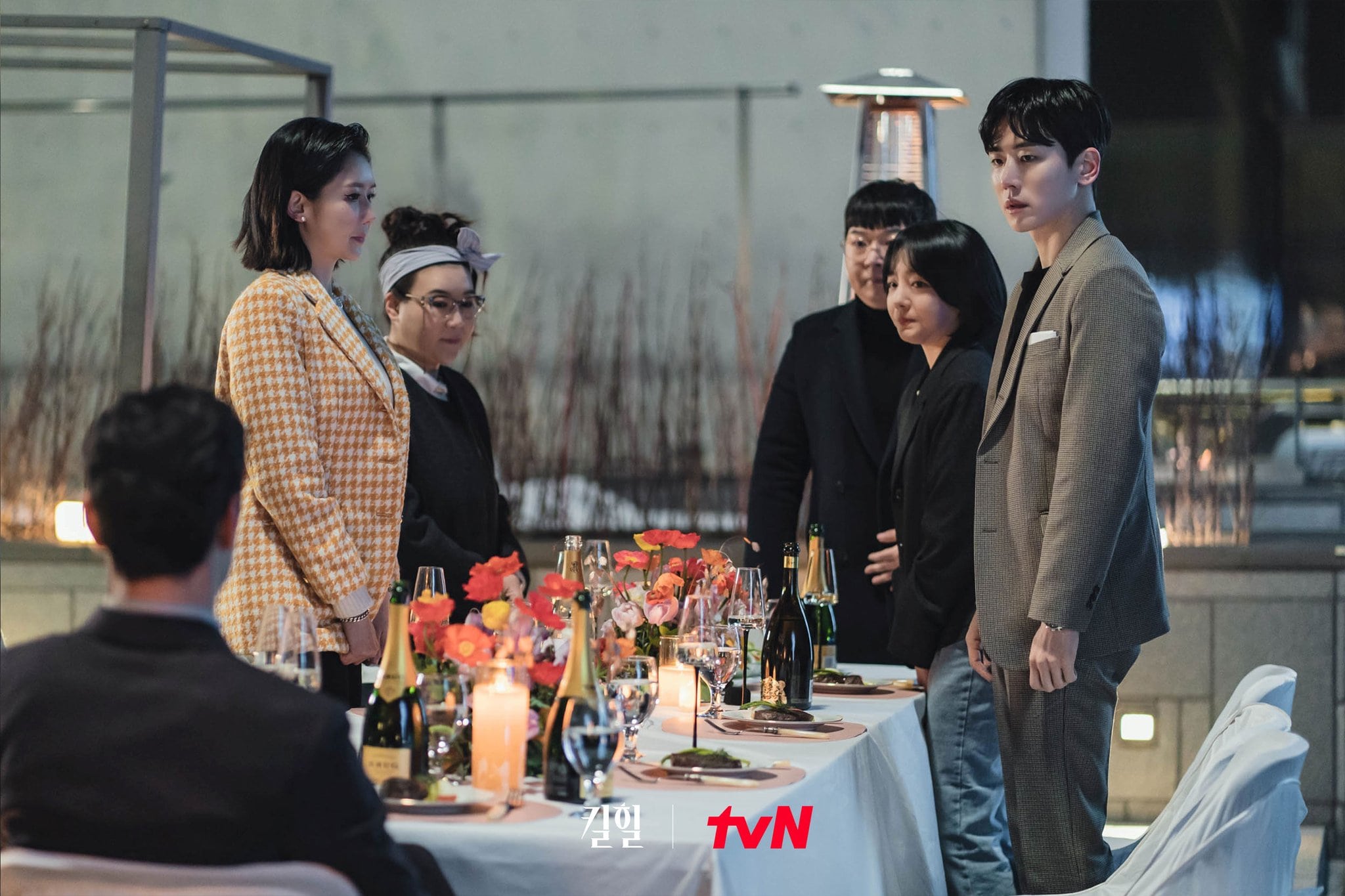 Meanwhile, on the other side of the table, chaos erupts when Sung Woo (Moon Ji In) has a little bit too much to drink. As the intoxicated rookie employee looks up at producing director (PD) Jun Beom (Jung Eui Jae) with a confrontational expression, Na Kyung (Go Yoon Bin) gets her phone out to record the disaster—but even after expecting some gossip-worthy drama, she appears shocked by the mess that unfolds before their eyes. 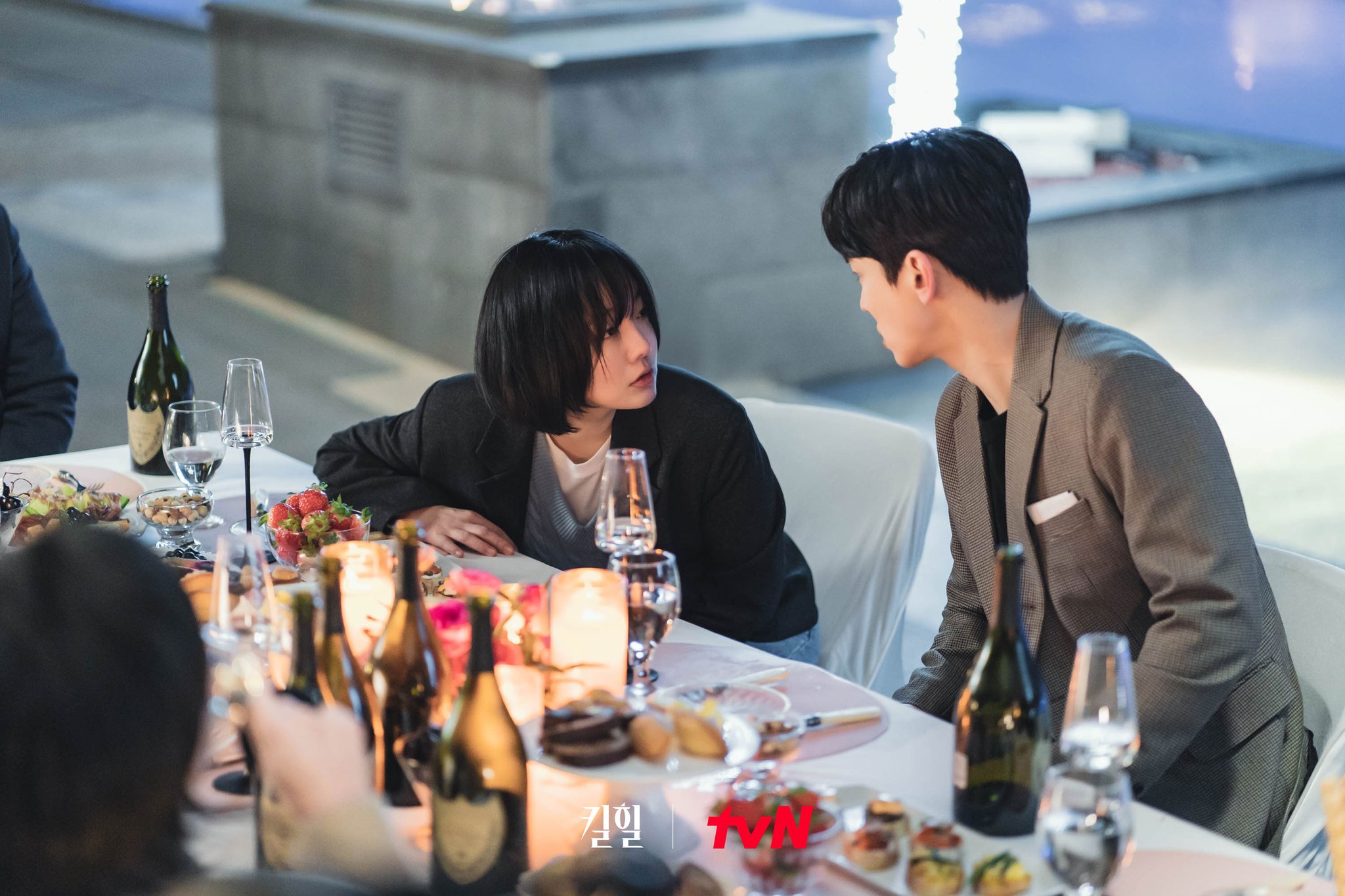 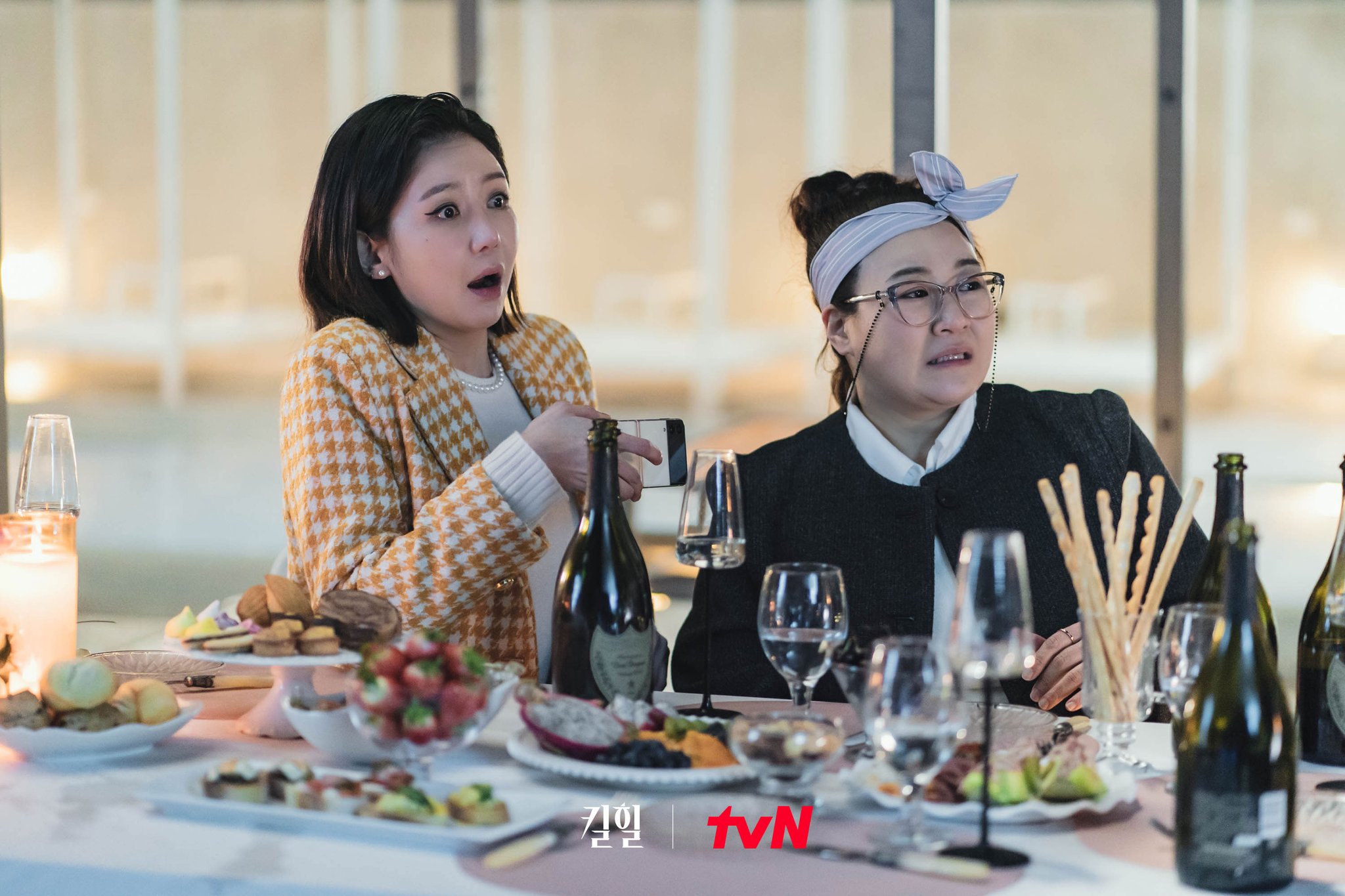 The producers of “Kill Heel” teased, “These closely entangled characters will all gather in one place. The war of nerves between Woo Hyun and Mo Ran to decide who has the upper hand will also become even deeper.”

To find out what happens at this eventful company dinner, tune in to the next episode of “Kill Heel” on March 23 at 10:30 p.m. KST!