Oh My Girl’s Mimi and Seunghee dished on the strict rules they had to adhere to in the past on “Knowing Bros” (“Ask Us Anything”)!

On the March 26 episode of the JTBC variety show, the two Oh My Girl members appeared as guests alongside former After School member Kahi and former Jewelry member Park Jung Ah, who recently became bandmates in the “Mama the Idol” project group M.M.D.

During the show, Mimi and Seunghee talked about their company’s rules from their trainee days, back before they debuted as Oh My Girl in 2015. “We were strictly forbidden from using makeup, including lip color,” revealed Seunghee. Mimi chimed in, “We weren’t allowed to wear shorts or miniskirts that came above the knee. They were very strict with female trainees.”

When Kim Young Chul asked if dating had also been banned, they immediately replied, “Of course dating wasn’t allowed. If you got caught dating, you’d be kicked out. You’d get kicked out right away.”

The Oh My Girl members went on to share that the company had been just as strict after their debut, recalling that they hadn’t been allowed to make eye contact with male idols in the hallways at broadcast stations.

“There was actually an order that came from high up in the company,” explained Seunghee. “They told [our staff], ‘When [Oh My Girl] passes male idols in the hallway, have them turn around and face the wall.'”

Mimi continued, “So if we were waiting in the hallway [and male idols passed by], they’d say, ‘Turn around.’ And we’d [turn around and] stand facing the wall like this. It was so embarrassing for us.” 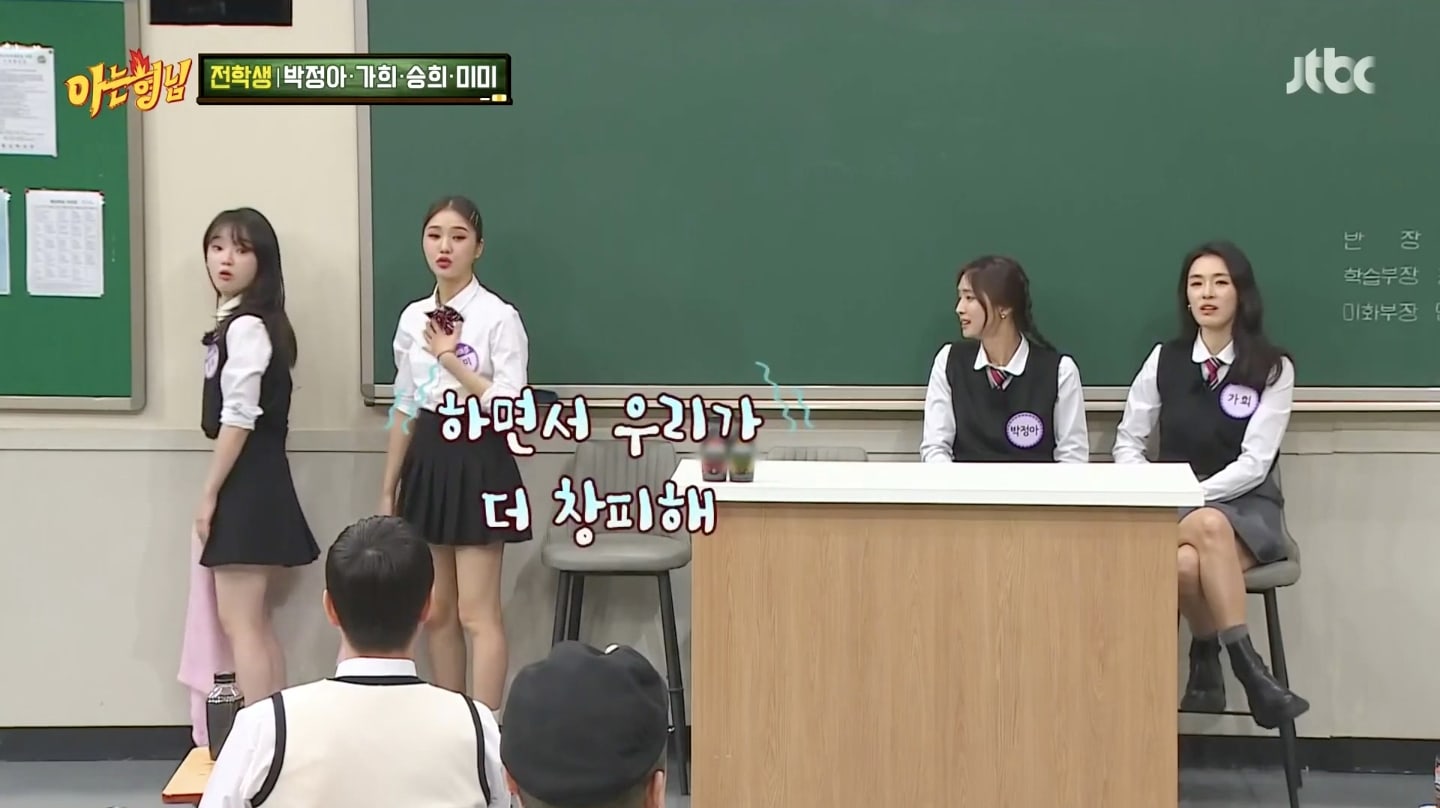 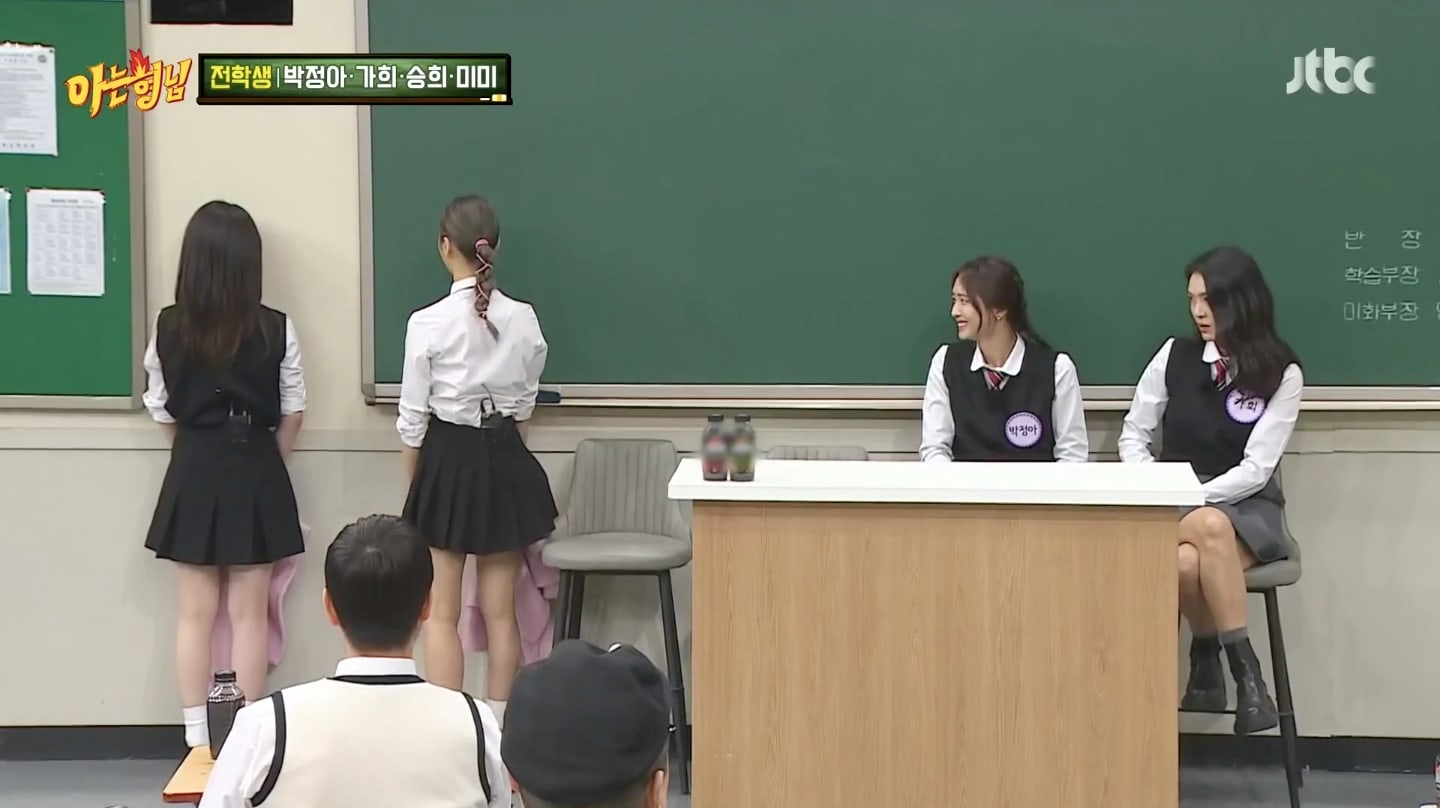 Seunghee added, “And whenever we went to the bathroom, we had to go in pairs [while holding hands].”

Lee Soo Geun asked if their dating ban had actually been written into their contract, and the Oh My Girl members confirmed that it had been.

“We were banned from dating for four years after our debut,” said Seunghee, before adding with a playful smile, “We’re in our 8th year now.”

The “Knowing Bros” cast members asked, “So you really didn’t date for four years, not even once? Not even secretly?” and both Oh My Girl members replied firmly, “That’s right.”

But when Seo Jang Hoon asked, “Surely you must have had ongoing flirtations, though,” the two Oh My Girl members responded differently. At the exact same time that Mimi confidently replied, “No, we didn’t,” Seunghee confirmed, “I’m sure we did,” leading to a hilarious moment when Mimi turned to Seunghee in shock and exclaimed, “You did?! When was this?! Get out!” 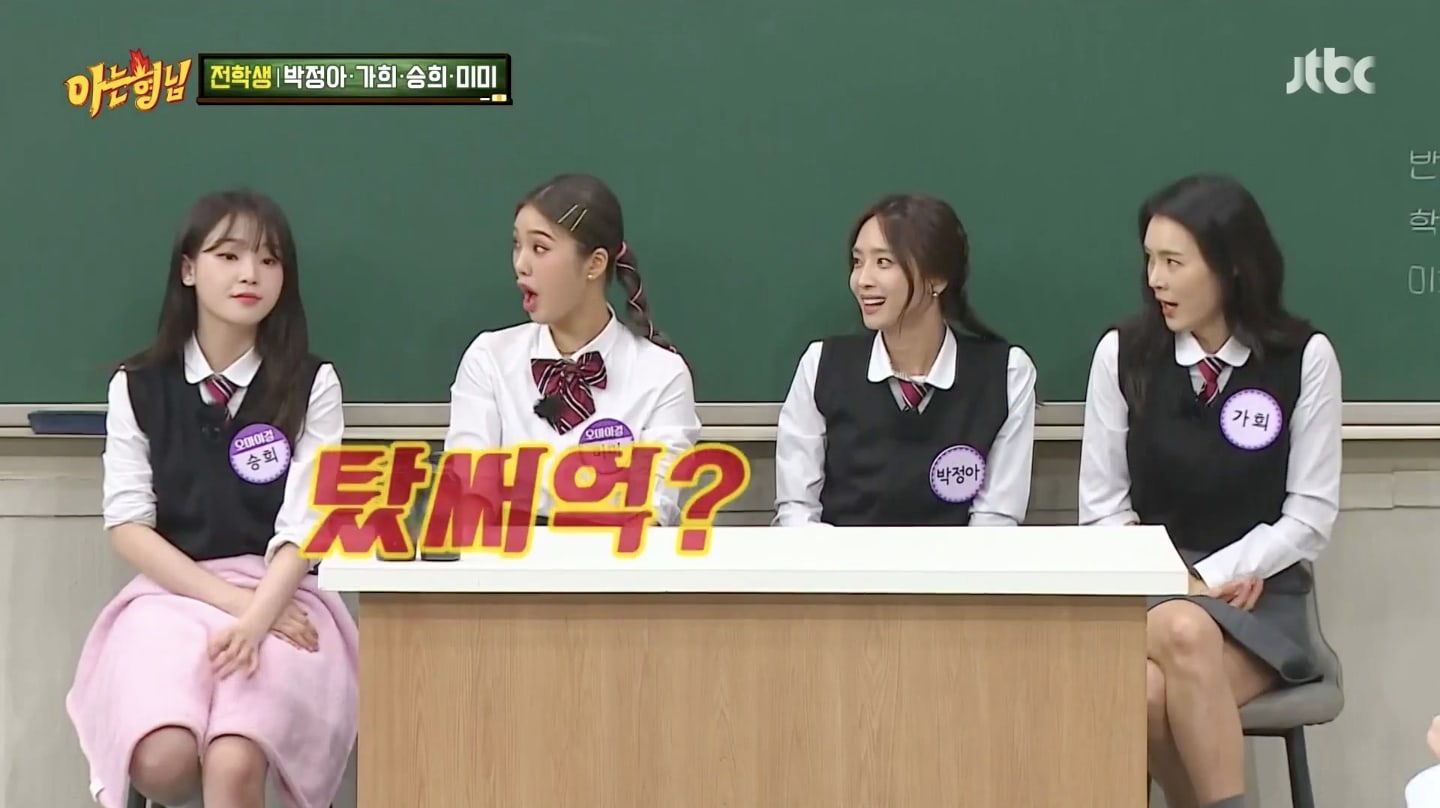 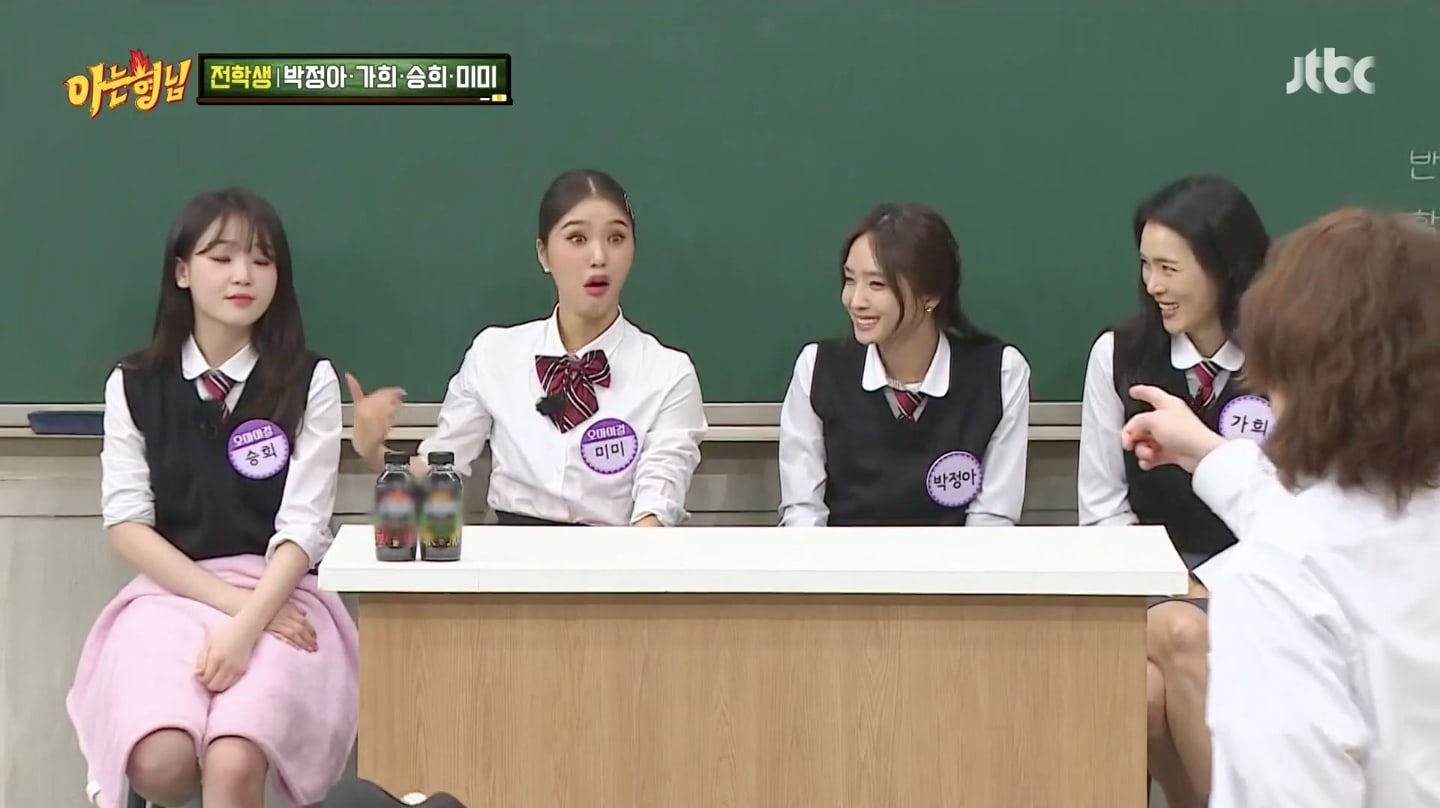 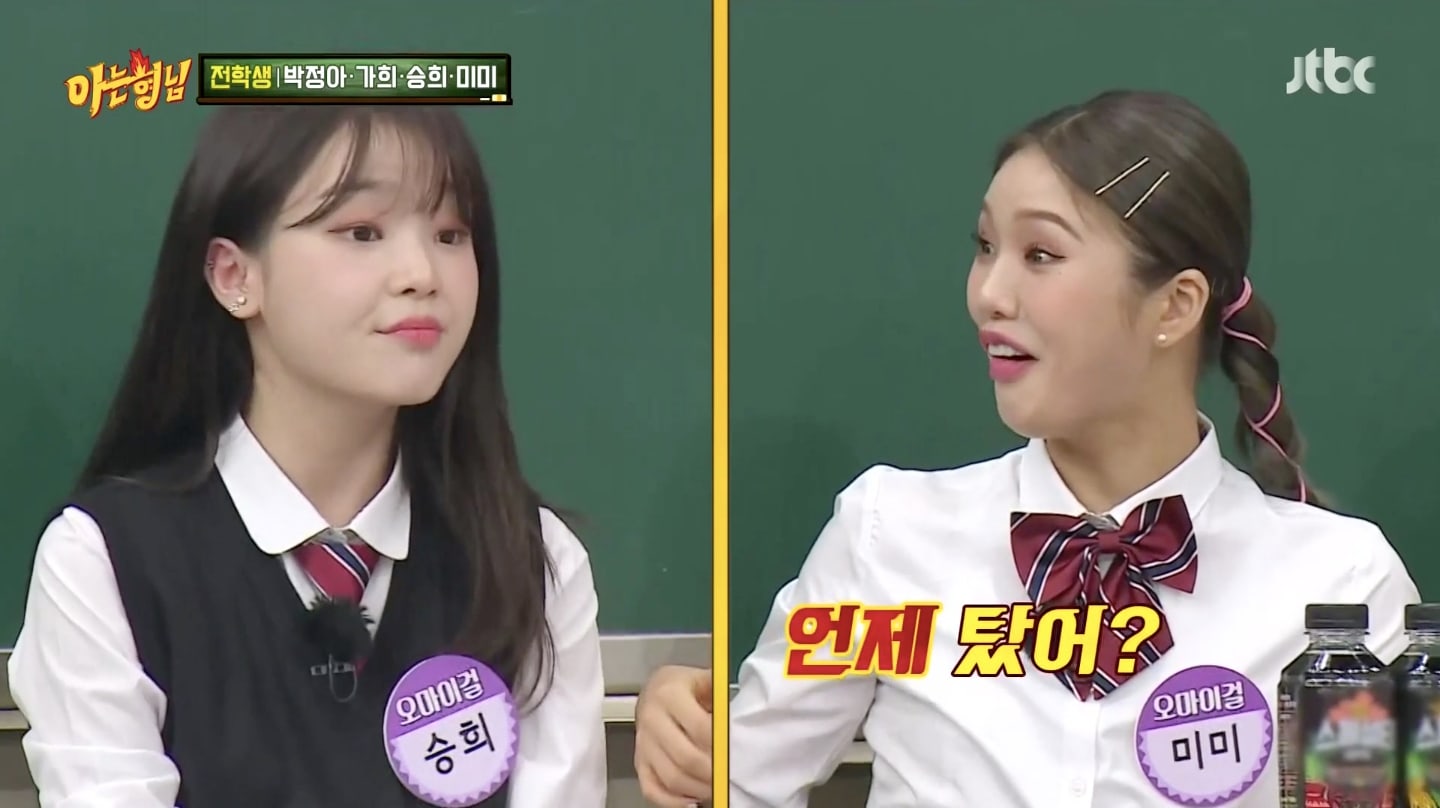 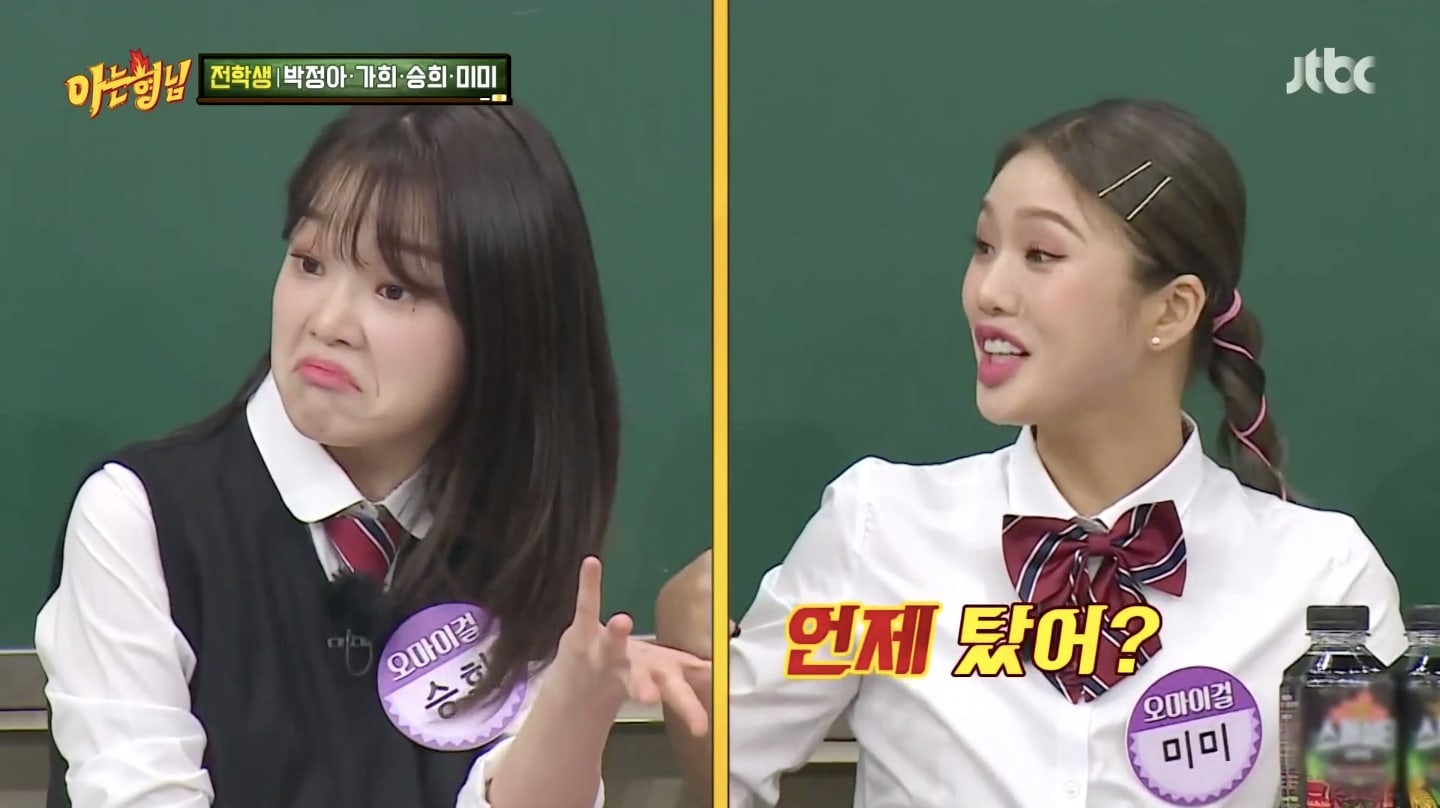 Watch full episodes of “Knowing Bros” with English subtitles below!

Oh My Girl
Knowing Bros
Mimi
Seunghee (Oh My Girl)
How does this article make you feel?