“Sh**ting Stars” returns this week with an adorable pair of episodes as Gong Tae Sung (Kim Young Dae) and Oh Han Byul (Lee Sung Kyung) step up to the stage to face each other in a new light. Spring is in the air, and everyone continues to be affected by the romantic haze going around at Starforce Entertainment. But there’s a darker undercurrent creeping through in Tae Sung’s life as all the uglier players suddenly start to rear their head. Thankfully, he isn’t alone to weather this particular crisis, and there’s someone he may be able to lean on in a very different way.

Wow, last week’s ending wasn’t a bait-and-switch! At first it seemed like the show was trying to make us think that Han Byul was running to someone else at the end instead of Tae Sung, but she really was going to him. She excitedly races over, only to find him mobbed by fans after having waited outside for hours. She calls Kang Yoo Sung (Yoon Jong Hoon) to rescue Tae Sung but can’t help dejectedly wondering whether someone like her can really be with a star as high as Tae Sung. At this point, Han Byul knows she has no feelings for Do Soo Hyuk (Lee Jung Shin) either but acquiesces to dinner with him out of politeness. His comment that he’s a man on earth compounds her fears of her and Tae Sung being able to go the distance, but the very wise Jo Gi Bbeum (Sojin) notes that there is no avoiding hurt in a relationship. Even ordinary people dating other ordinary people get hurt, so Han Byul can’t hide behind that fear. That realization propels Han Byul to Tae Sung’s side, where we get one of the cutest confessions of all time. Tae Sung is so adorably nervous but straightforward as he stammers through how much he likes her, and Han Byul compounds it all with kissing him first and screaming at what she just did.

It’s the best thing ever, and even Tae Sung having to leave for a location shoot for a week doesn’t change that. These two proceed to spend the next entire week being absolutely adorable with all of the awkwardness, hilarity, and cringe-worthiness that predicates the start of a relationship. And Tae Sung being so smitten and driving for three hours just to see her for 20 minutes is the cherry on top. But they aren’t the only ones in a blissful haze.

2. Ho Young and her Yoo Sungs

Kim Yoon Hye is hitting it out of the park as the firm, sweet, and earnest Park Ho Young, who has her hands full with her Yoo Sungs these days. The actor she manages (Lee Seung Hyub) is scoring commercial after commercial and slowly climbing the ladder to success. He’s also climbing an emotional ladder of sorts, because unknown to Ho Young, her actor has developed a crush on her. 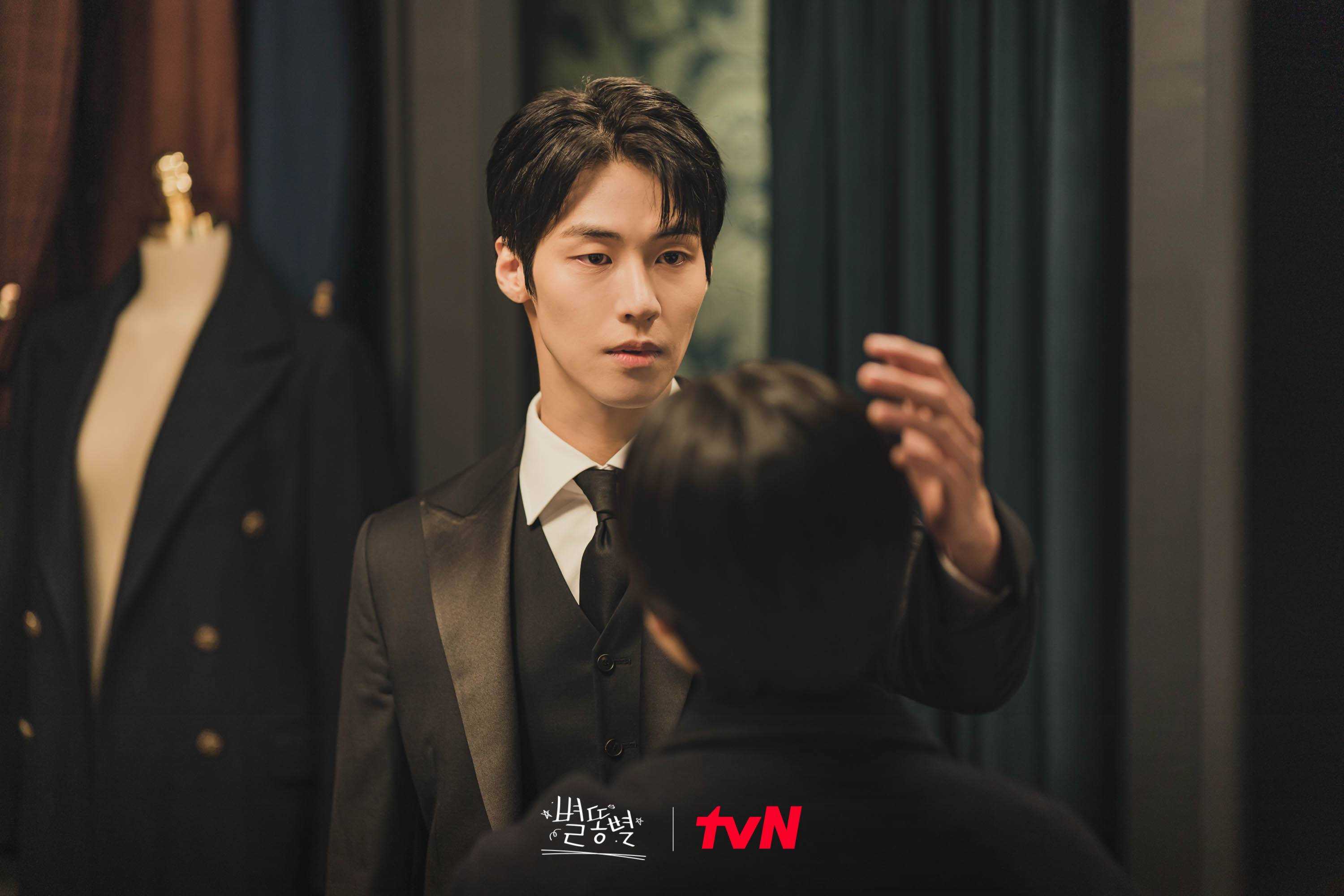 Then there’s the original Yoo Sung, her sunbae at Starforce and Tae Sung’s closest friend, whom Ho Young can’t keep her mind off. It’s getting to the point that she keeps the Band-Aid he wrapped around her hand for days instead of switching to another one (Ho Young, those things are germ factories! Switch it!). Finding Yoo Sung on a low day, she cheerfully suggests drinks. A hilariously oblivious Yoo Sung continues to pat her head every day and tries to do so over drinks and dinner when Ho Young asks him to stop. Flustered, he’s about to apologize for making her uncomfortable when she blurts out that she likes him and then practically flees. 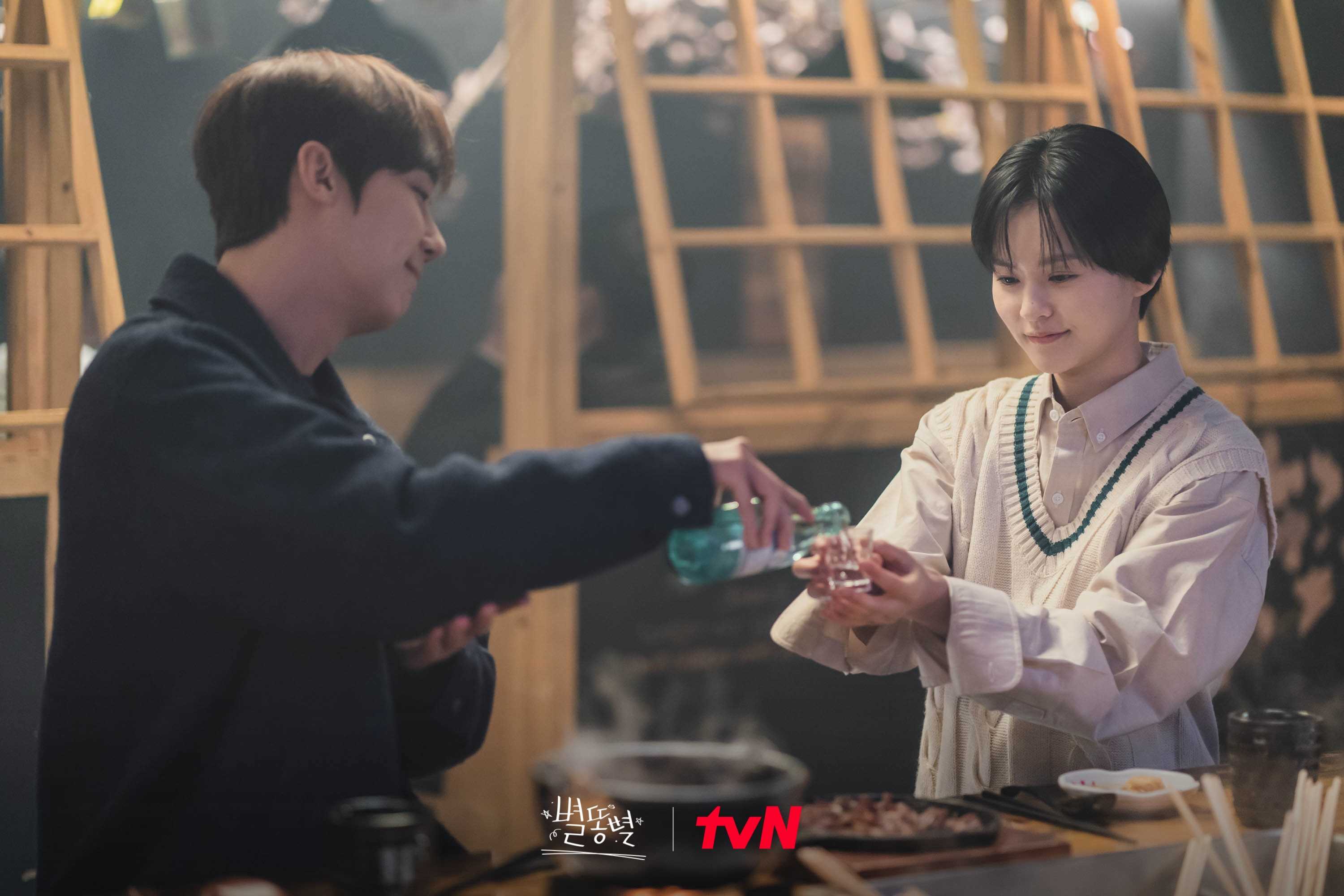 Yoo Sung’s left with a whirlwind of a day to contend with a romantic confession to boot. What a time! Can’t wait to see how this one plays out because they are too cute together. 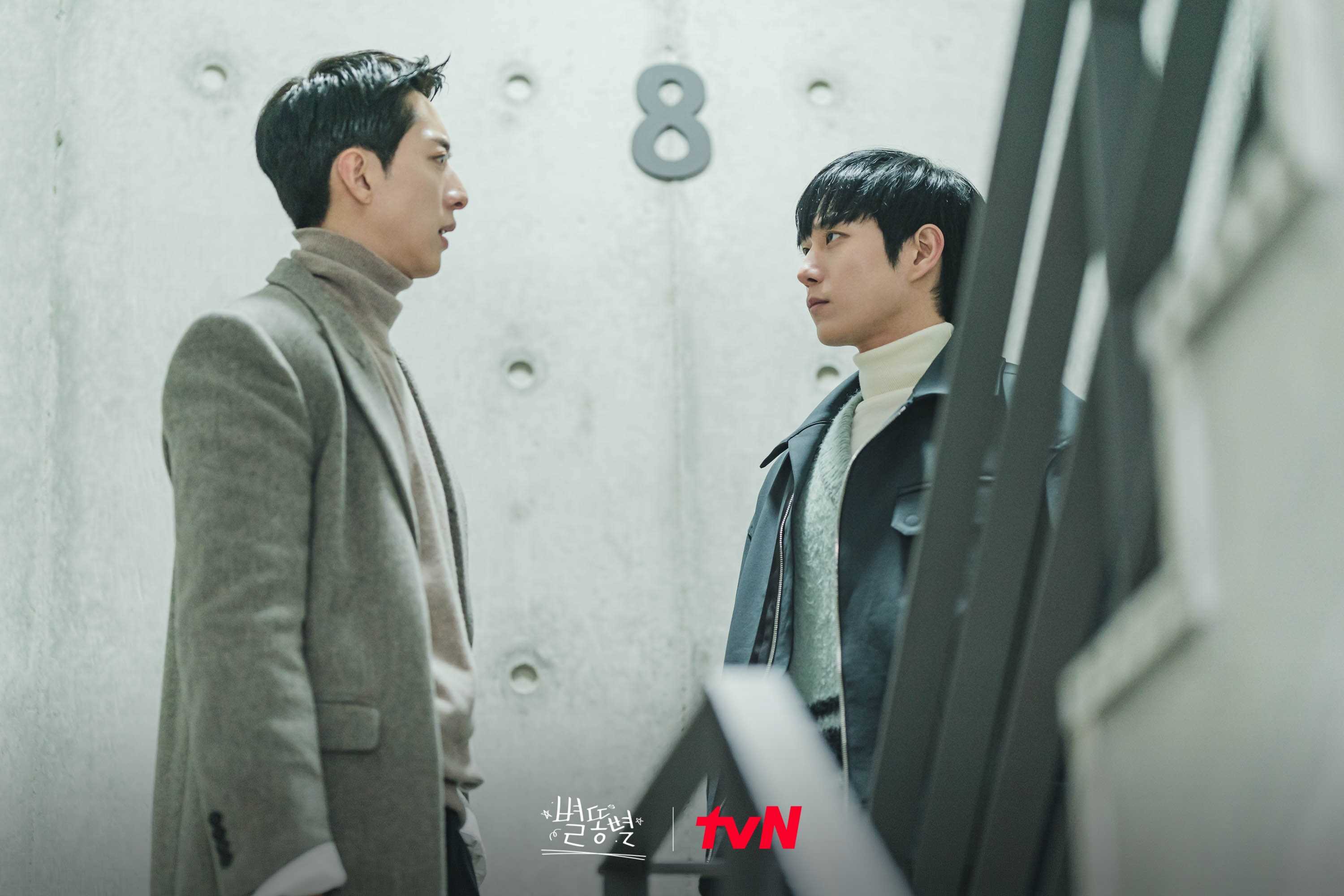 A new couple has just hit the tabloids and it’s… Tae Sung and Soo Hyuk? The source of the rumor insists that the two are neighbors (true), visit each other often (true, but more for Han Byul purposes), and have clandestine meetings in stairwells (true, but due to both having a longstanding bet not to use the elevator). Han Byul’s jaw is on the floor while a very annoyed Soo Hyuk gives Gi Bbeum an interview to flip public sentiment on its head. (Anyone else think that those two are perfect for each other?) What makes this plot development so great is how well it’s treated. 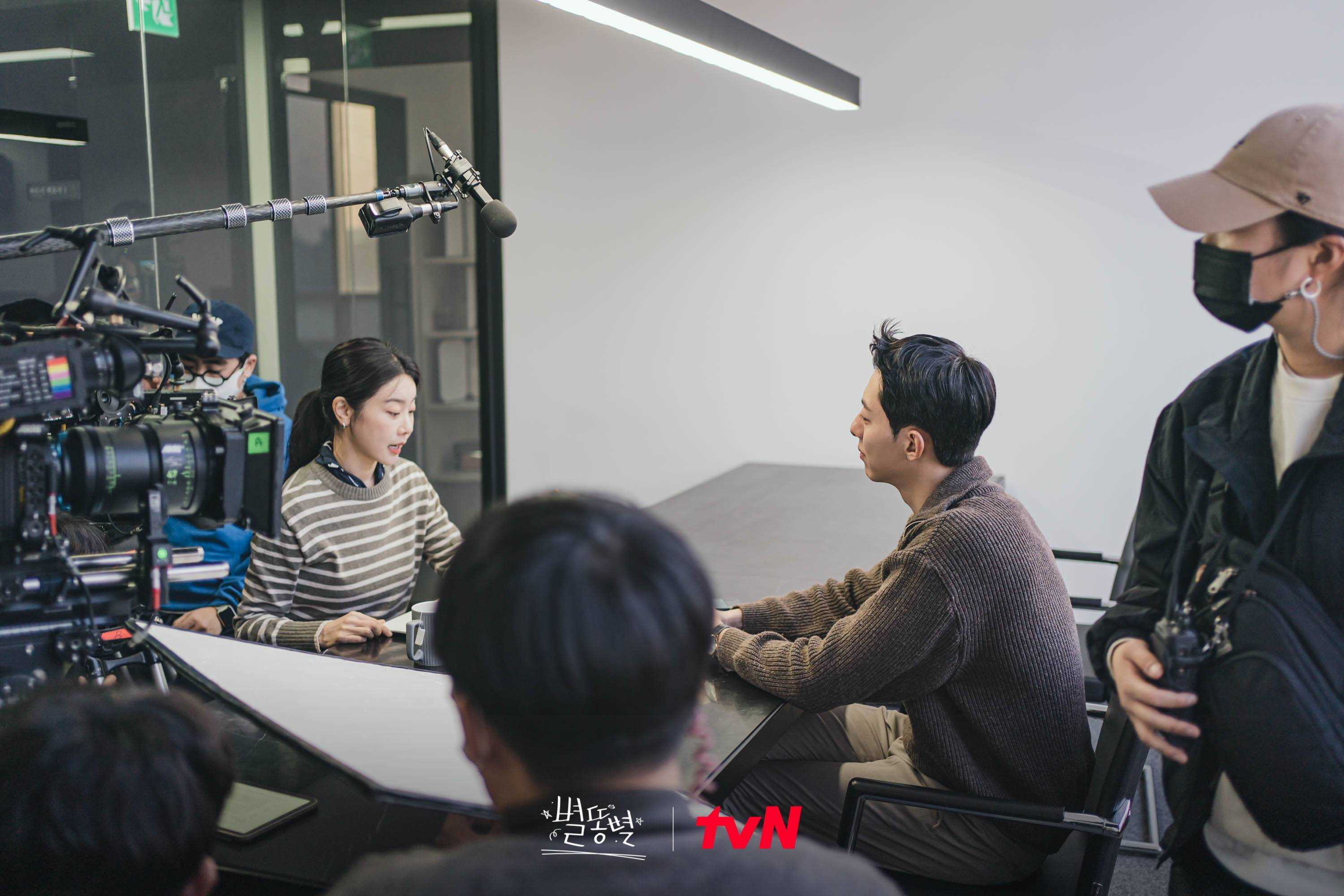 Han Byul & Co. simply put out a clarification as if it were any other rumor, while Gi Bbeum finally gets an exclusive from the mouth of the horse, with Soo Hyuk vowing to sue anyone who drags him into needless scandals. The focus here isn’t homosexuality, and it isn’t made fun of or used as the butt of a joke. Rather, it’s used as an annoying scandal with no basis in fact. Tae Sung and Soo Hyuk even laugh about their supposed couple status and pretend-flirt when they meet that day in the stairwell, and the two part on good terms. Given this show’s not-so delicate handling with respect to the entire continent of Africa, this is a much-needed step forward. But this is where the hilarity ends, because trouble is rearing its head in Tae Sung’s life. And this rumor is only the start of everything that is about to hit the fan all at once. 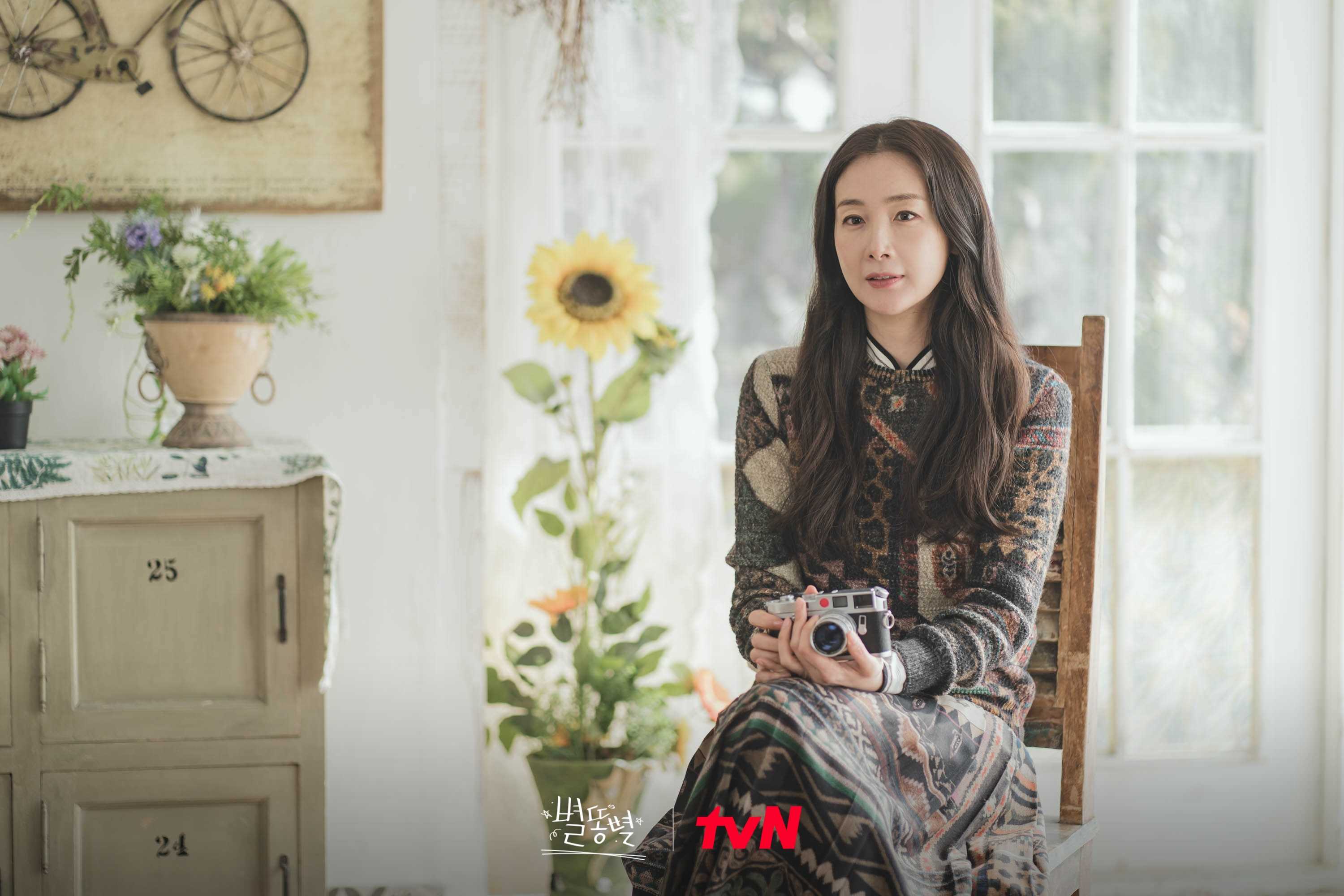 What on earth does Eun Si Woo (Choi Ji Woo) wants from Tae Sung all of a sudden? We’ve seen that she’s stayed away from her son for many, many years to the point that she didn’t even know he was going to become a celebrity. What’s made her want a relationship with him after all this time? For that matter, why has Yoo Sung secretly been in contact with her? It’s very clear that he cares a lot about Tae Sung and would hunt down anyone who dared hurt him, so why keep close ties to the mother Tae Sung can’t stand? It’s all very peculiar.

What hurts about Si Woo is that rather than showing up with demands, she comes with a smile as if nothing ever happened to sour things between her and Tae Sung. She’s sweet, a little childish even, and there’s something about her that you can’t help liking. She knows her son is in love with Han Byul but doesn’t say anything to the head of Starforce about it. So what caused the rift all those years ago? Does she have a valid reason for skipping out on so many years of Tae Sung’s life? Either way, her presence is a dagger to his heart, and her constant visits aren’t helping in the slightest. And yet it does some good because without her, Tae Sung would never have found the snake in his midst.

5. The shady “housekeeper” and the stalker 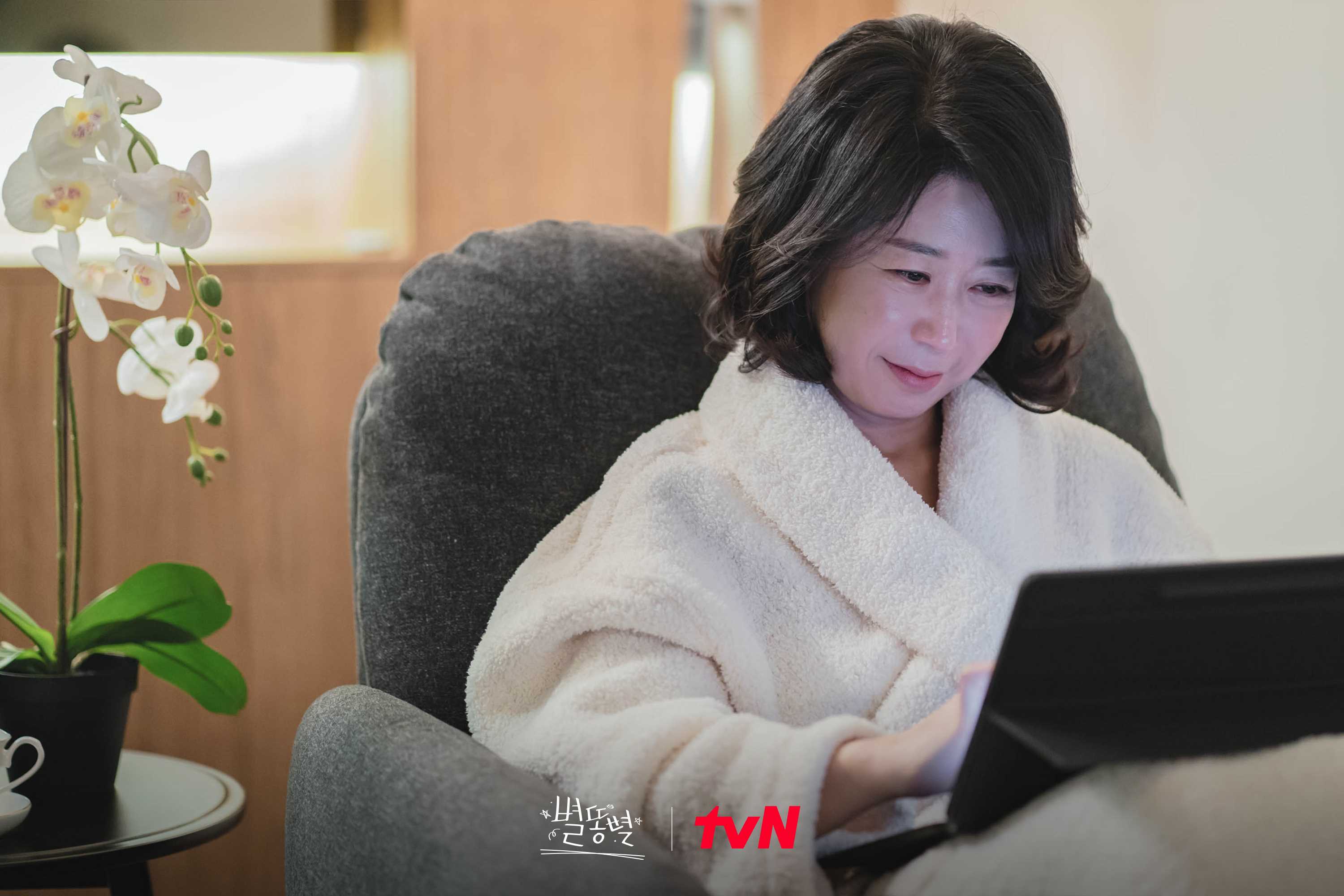 Kwon Myung Hee (So Hee Jung) has been an odd bird from the start with her shady glances and intention overdoing of salt. Eun Si Woo alerts Yoo Sung to seeing Myung Hee in one such store, and Han Byul gets weird vibes when Myung Hee knows the brand of the necklace Tae Sung gave her. At first, it seemed as though she was stealing from Tae Sung and using her ill-gotten gains to shop at luxury department stores, but the truth is much worse. It turns out that Myung Hee is actually a super rich Gangnam resident who was a Tae Sung fan. A few years back, she tried to give him an expensive watch and got furious when he rejected it. So, she hid her wealth, pretended to be a housekeeper and used her connections to get her hired at Tae Sung’s place where she over-salted all his food to be “special” to him. Um what?

The sad thing is that stuff like this is actually pretty realistic given the insanity fans can get up to. Upon being caught, she simply laughs and tells Tae Sung that she’s special to him now after all this time, isn’t she? Tae Sung is horribly shaken upon realizing that someone he had in such close quarters all this time, someone he trusted enough to eat her food, was this maniacal on the inside. Thankfully Yoo Sung and Han Byul arrive in time to respectively threaten Myung Hee with every form of legal action known to mankind and comfort Tae Sung. But it’s still a huge blow. 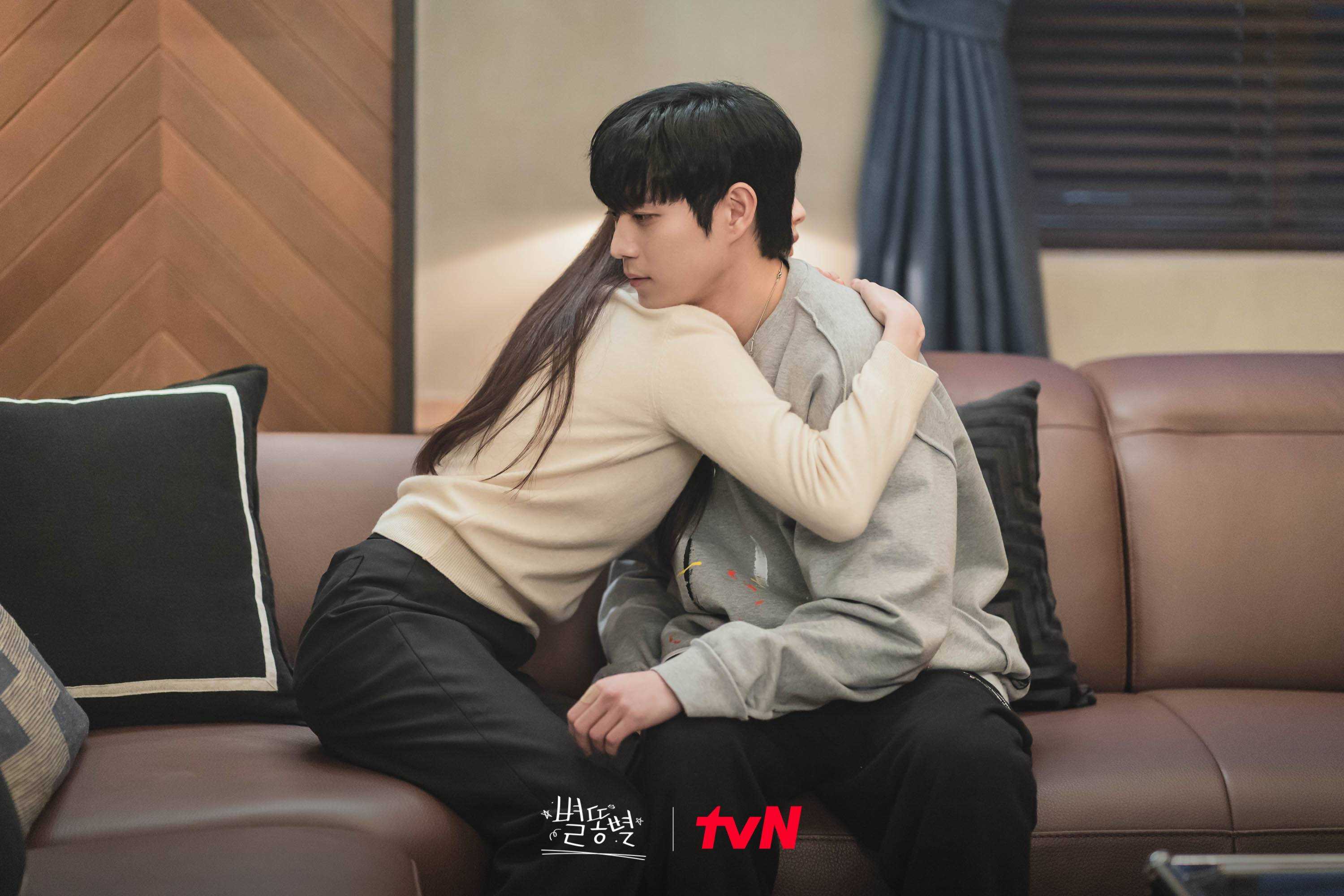 Next week shows another potential blow coming. Someone’s snapped pictures of Tae Sung suffering through Eun Si Woo’s hug outside his apartment and is probably going to make it seem as though they’re dating. Then there’s the huge blow that Kang Min Gyu (Lee Han Ik), Tae Sung’s former manager, is a member of his anti-fan cafe and also knew Tae Sung’s deceased best friend, actor Lee Yoon Woo (Im Sung Gyun). This is the same guy who ran his car through a bus stop billboard of Tae Sung earlier on in the show. Just what is his deal, and why does he hate Tae Sung so much? Only next Friday can tell! 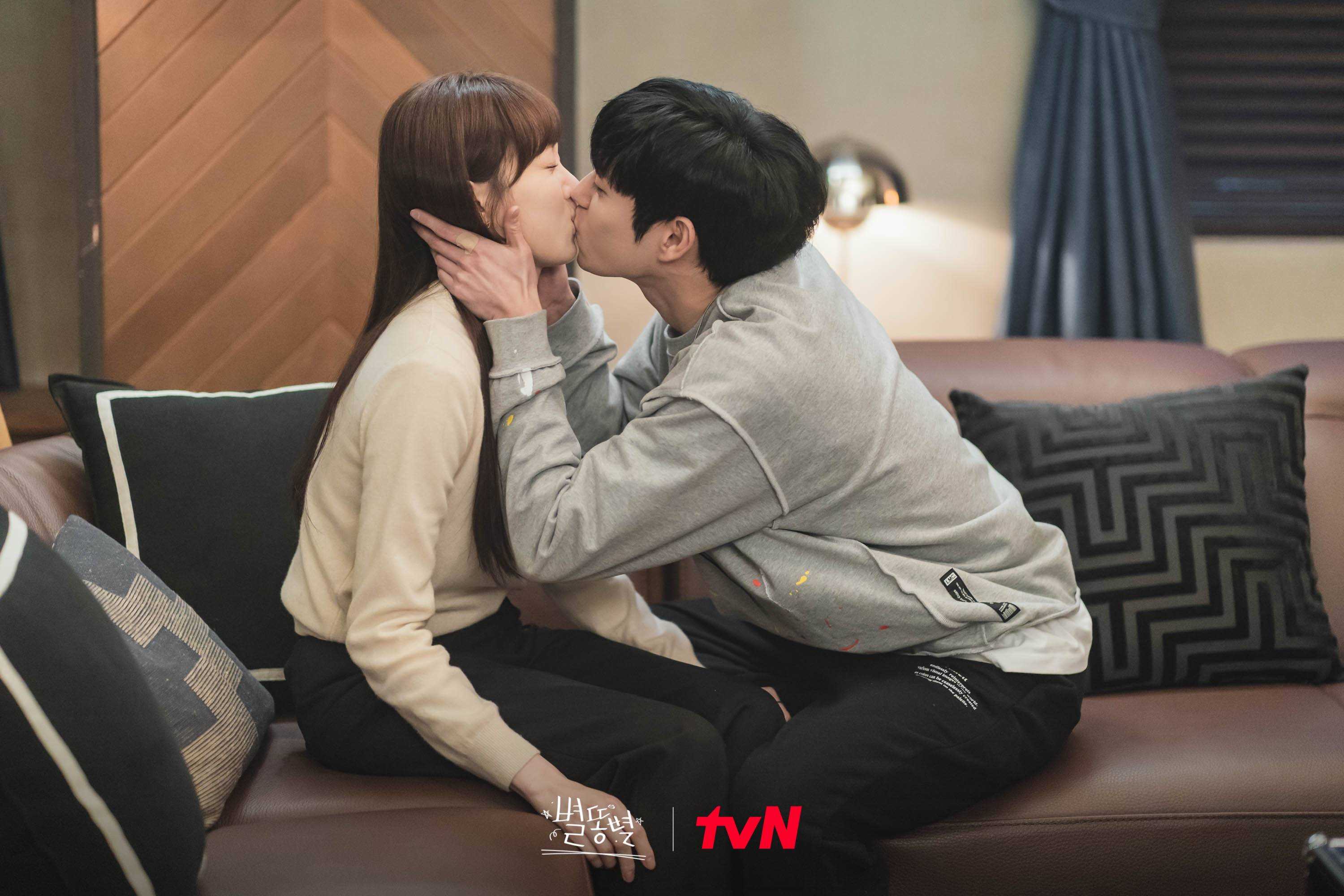 Overall, this week was a fantastic pair of episodes that really solidified how fun this show is and how effortlessly Lee Sung Kyung and Kim Young Dae can light up the screen. Several plot threads were wrapped up in ways that felt true to the characters and were respectful of everyone’s feelings. Soo Hyuk is respectful of Han Byul’s rejection and remains on good terms with her like a true gentleman. He and Tae Sung also don’t antagonize each other afterwards as they understand that there’s no need for them to bicker like children. Well done, guys.

There are times though when it felt like the sheer influx of characters means that Han Byul takes a backseat to this story. We know nothing of her family life and so forth but have a lot of insight into Tae Sung’s traumas. As lovely as he is, it would be great if we delved more into everyone a little further. Either way, these are such great characters, and this show definitely doesn’t lack for material to mine from them. Plus, look how cute these two are. I could watch them forever!