“Sh**ting Stars” left us on quite a cliffhanger last week with things going from bad to worse for Gong Tae Sung (Kim Young Dae). But a new wind blows this week to upend this turmoil and bring things back to how they should be. For some it’s new beginnings, for others it’s being able to return to the comfort of their everyday lives. With the anniversary of a tragic event on the horizon, everyone’s looking back and figuring out how to keep going forward. Memory is the topic of the week as our favorite people at Starforce do some soul-searching. And the answers they find are all heartwarming. 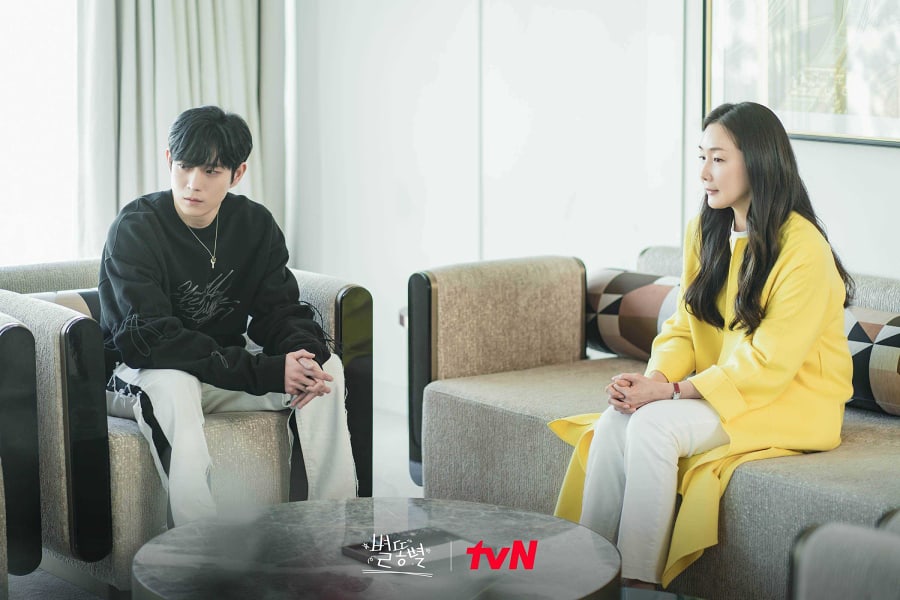 Tae Sung has always seen himself as having had no one, save a mother who abandoned him as a child. But there is another perspective. During Eun Si Woo’s (Choi Ji Woo’s) press conference, she admits to having been a terrible mother and having sought Tae Sung out to apologize rather than worm her way into his life. Watching this online, Tae Sung can’t help but see where his girlfriend Oh Han Byul (Lee Sung Kyung) was coming from by holding the conference, especially when he hears that the secret was about to come out in an uglier way with reporters calling him an illegitimate child. But Han Byul beat them to it to save Tae Sung the added pain of being called illegitimate. Eun Si Woo confides in Han Byul about her illness, and Han Byul – straight-talker that she is – goes directly to Tae Sung, who goes directly to Si Woo. After all these years, they finally sit down to really talk and find that memory is a strange thing. 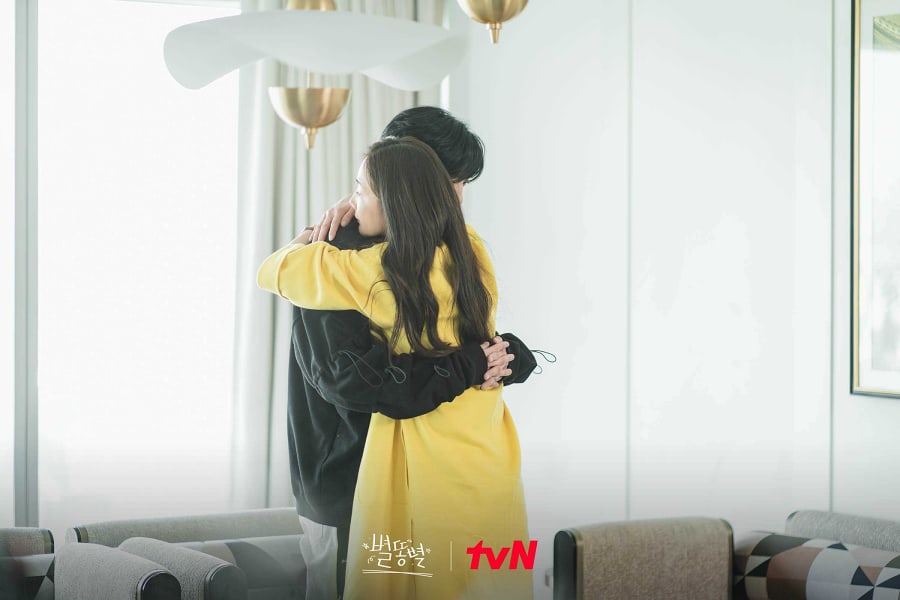 At the time, there’s no doubt that Tae Sung was struggling and saw himself as utterly alone. But Si Woo was always in the background watching over him and ensuring that he lacked for nothing as he grew up, even retiring to ensure that their paths didn’t cross in the entertainment industry. Si Woo acknowledges what she’s done wrong, and Tae Sung is able to see that he wasn’t entirely as alone as he thought. They agree to put the bad memories away. Eun Si Woo leaves Korea with a lighter heart and the promise of a future relationship with her son as he promises to visit from time to time.

2. How to remember a star that’s gone 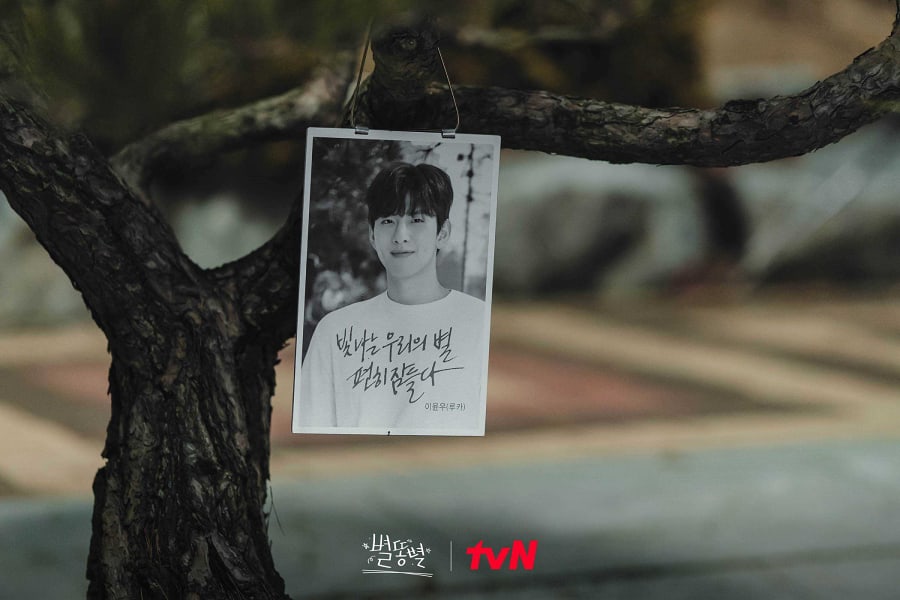 Every story has multiple sides to it, but what happens when one of those sides vanishes forever? It’s one thing to revisit the past from another angle. It’s another to realize that you’ll never be able to see that angle. With Eun Si Woo gone, the next crisis at Starforce is one that’s been brewing for a long time. Lee Yoon Woo (Im Sung Kyun) has been an ever-felt presence in Han Byul’s and Tae Sung’s lives. He was Tae Sung’s roommate all through high school and fellow actor afterwards. And Han Byul was in charge of writing up press releases for him. So when his death anniversary approaches, the entire Starforce team grows somber. Everyone looks back, wondering what they were doing when they heard the news, what they could have done different, and what they might have done inadvertently that contributed to Yoon Woo taking his life. Han Byul can’t forget the one call she missed while having passed out after taking cold medicine. She was also one of the first on the scene and had to plan the funeral and deal with reporters while breaking down.

Jo Gi Bbeum (Sojin) can’t help but remember Han Byul’s anguished face at the funeral and being the very last reporter that Yoon Woo spoke to. And Tae Sung’s fear of flashing cameras was reborn the day he returned shell-shocked from the fan meeting event he had to go to instead of Yoon Woo’s funeral. Reporters swarmed him, snapping pictures of his expression. They all grieve, they all wonder why, and they all want someone to tell them that they weren’t the reason for Yoon Woo’s death. That’s the funny thing about memory. It’s a story your mind tells you about your past, and everyone has their own. 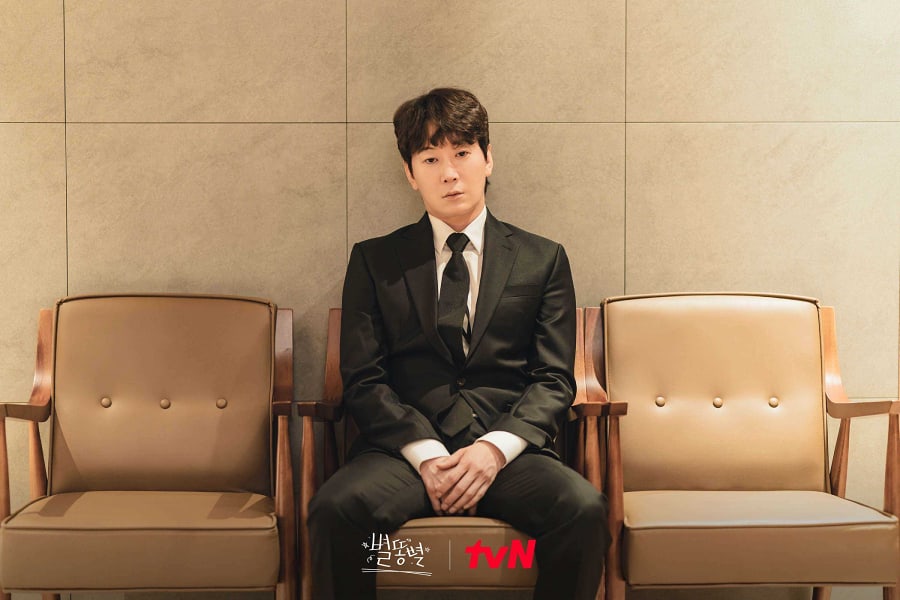 One of the great things about “Sh**ting Stars” is how it tries to be realistic when possible, and the show doesn’t tell us why Yoon Woo made that decision. Like the characters, we will never know what prompted him to do it. And that’s the point. We find out that Tae Sung has known all along that the person sending him nasty letters, accusing him of killing Yoon Woo, was his former manager-turned-bar-owner Yoo Gwi Nong (Heo Gyu). Gwi Nong’s also the person behind the anti-fan cafe and the one who sent Tae Sung a picture of his former Starforce ID.

Rather than escalate things, Tae Sung consults with Do Soo Hyuk (Lee Jung Shin) and gently approaches the man to tell him to stop. They can’t change the past. They can only choose how to remember Yoon Woo going forward, and sending Tae Sung threats isn’t it. Han Byul realizes what Gwi Nong’s done at the same time and rushes over only to find that Tae Sung’s gentle lecture has worked and Gwi Nong has turned himself over to the police for punishment. It’s a somewhat sad end to the Yoon Woo saga, but what makes it heartwarming is how Han Byul and crew don’t hold any animosity against Gwi Nong and agree to wait until his return. Memory makes all do strange things, and sometimes it’s the good memories that drive people crazy.

Kang Yoo Sung (Yoon Jong Hoon) is incredibly perceptive when it comes to his stars but ridiculously obtuse when it comes to his feelings. He’s spent all this time believing that he saw Park Ho Young (Kim Yoon Hye) as a colleague. But it only takes her confession and subsequent awkwardness for him to revisit the meaning behind every interaction with her. As he tells her, he gave her a script meant for one of his actors when he fights tooth and nail with other managers to secure the best deal for his team. He only pats her head, never anyone else’s. But he couldn’t see what was under his nose until Ho Young spoke first. Then, all of a sudden, every memory of how often he’s called her cute and how brightly he smiles in her presence (he really does!) all makes sense! Funny how memory works that way. And just like that, Yoo Sung delivers an adorable confession to Ho Young who nearly screams in sheer excitement.

She runs around the office all giddy, and these two are so cute. Seriously. Too cute. He smiles so widely around her; it’s actually awesome. Yoon Jong Hoon deserves a rom-com of his own for sure!

4. How quickly we all forget

There’s only so much everyone can remember, so it’s no wonder that things slip through the cracks. Some of them can even be moments that others would consider huge. World-weary Gi Bbeum realizes that she’s falling for Soo Hyuk when he confidently assures her that her article was not responsible for Yoon Woo’s death. She’d done an interview with Yoon Woo on nabbing his first lead role in a drama where Tae Sung was supposed to be the lead. The comments were harsh, and Gi Bbeum can’t help but think that she contributed in some way to Yoon Woo’s decision. Soo Hyuk, in that no-nonsense manner of his, disagrees. And when Gi Bbeum can’t help but crying in relief, he’s cool about it and just sits by her side. No questions asked. 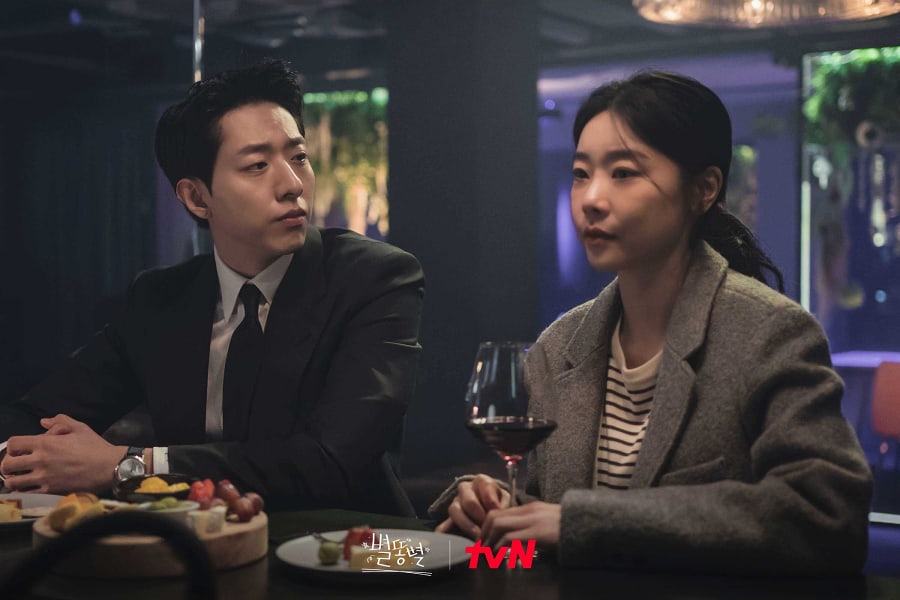 She brings up her feelings with Han Byul, saying that she doesn’t want any issues between them, and Han Byul wonders why there would be any issues with that. Gi Bbeum realizes that Han Byul’s completely forgotten all about Soo Hyuk’s confession. It’s hilarious given the effort Soo Hyuk put into that confession by fraternizing outside work hours, but that’s also how the cookie crumbles, what with how busy life is! Either way, it’s good not to see any unnecessary rivalry or hurt feelings over that. Soo Hyuk and Tae Sung are on their way to becoming best friends who can’t even pretend that they dislike each other, so it’s only fitting that everyone keeps going forward. 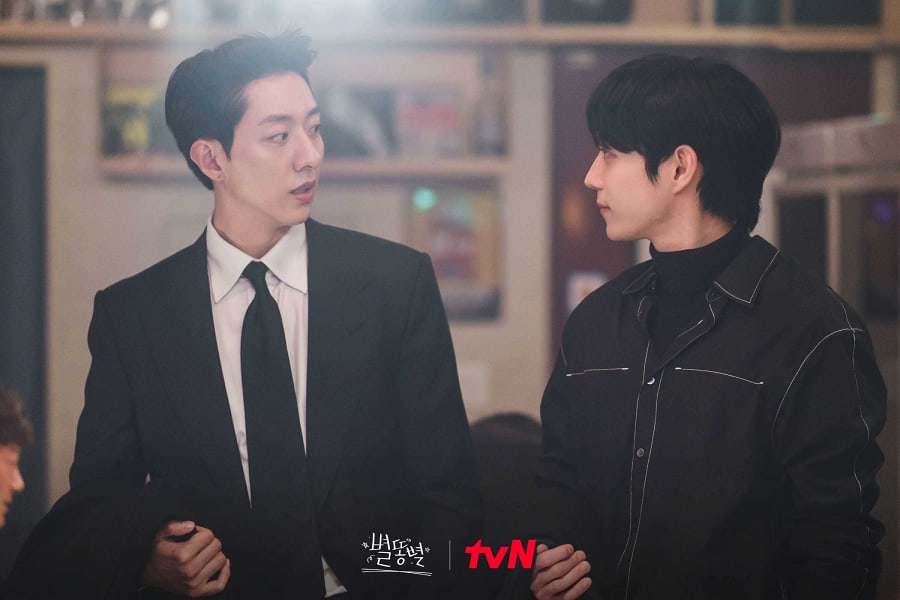 With all major conflicts wrapped up this week, that only leaves one for the final pair of episodes: Han Byul and Tae Sung’s relationship. It seems unlikely that the drama will allow for them to date in public freely without issue. That isn’t in keeping with the generally realistic tone here. So how is Starforce’s CEO going to react after seeing Han Byul and Tae Sung being openly affectionate? Next week will tell!

Okay, but they’re too cute! This show has such healthy relationships!