After last week’s delightful pair of episodes, “Sh**ting Stars” returns this week with a heavier focus. Gone are the days of lighthearted rumors and romance as things start to heat up for Gong Tae Sung (Kim Young Dae) in a way that threatens to ruin his life. With her fledging romance with Tae Sung only just off the ground, Oh Han Byul (Lee Sung Kyung) faces a volley of slings and arrows from all quarters. Everyone seems to have it out for Tae Sung, and even he doesn’t know who to trust anymore. When rumor snowballs into career-ending scandal, everyone has something to lose. But what will they have to give up in order to save Tae Sung? And whom should they save, the actor or the person?

Here are five roadblocks that Han Byul and Tae Sung face this week!

1. Han Byul’s fear about the future of her relationship

They say there’s no point arguing with an ignorant person, but what’s Han Byul supposed to do when Tae Sung’s creepy ex-housekeeper/rich Gangnam lady insists on badgering her? She seeks out Kwon Myung Hee (So Hee Jung) to return her unwanted presents and to make a point: that Myung Hee may think she’d made herself “special” in Tae Sung’s eyes, but it’s only in the sense that he’ll always have horrible memories of her. If that’s the sort of mark Myung Hee wants to leave on Tae Sung’s life, then it’s pretty pathetic. 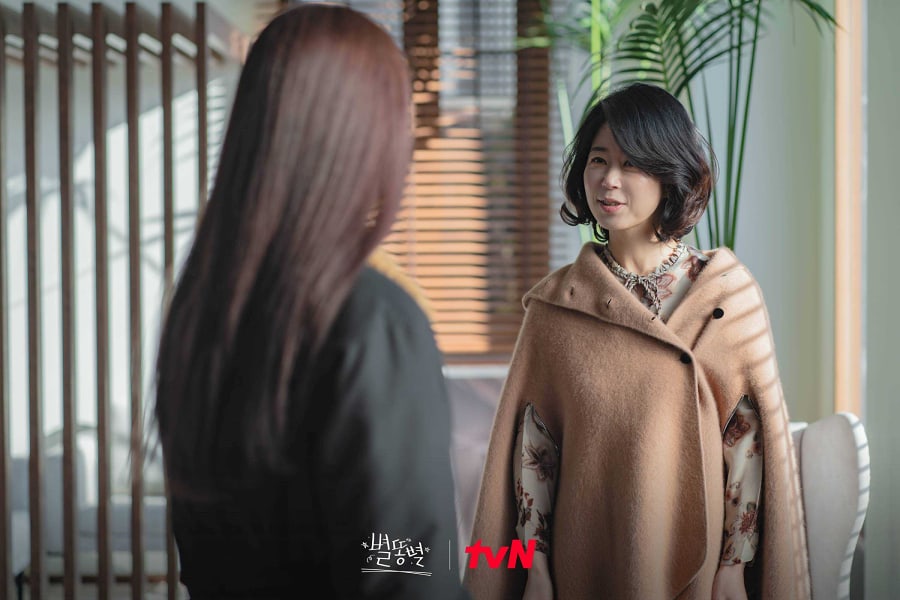 But Myung Hee doesn’t back down and hits Han Byul exactly where it hurts: the future of her relationship with Tae Sung. She taunts Han Byul that Tae Sung won’t keep her around for long and will move onto someone that’s on his level. It’s Han Byul’s worst fear, and she’s subdued for the rest of the day even when Tae Sung takes her on a camping trip to the seaside. He sees her worry and does a wonderful job of allaying her fears by confirming what we all knew, that he liked her from the very beginning. It was a curiosity that persisted throughout their time in university, and it took him forever to realize it. But once he did, there was no looking back. The confession visibly moves Han Byul, and he’s ridiculously tender with her. 10/10 boyfriend right there. And for a moment it seems that all will be well. But a looming disaster has the potential to shatter peace. 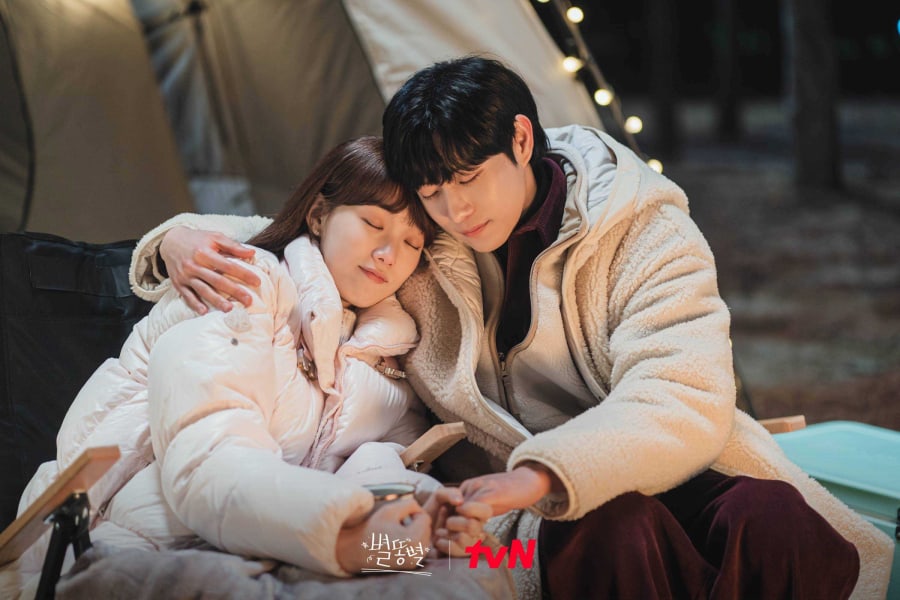 Tae Sung is already off-kilter with his housekeeper turning out to be a creeper. So he’s naturally even more frightened when an anti-fan begins texting him with pictures of a Starforce ID, warning him not to trust anyone there. A dazed Tae Sung wanders through Starforce wondering who it could be. Thankfully, he communicates with Yoo Sung (Yoon Jong Hoon) who immediately puts two and two together and races off in search of Kang Min Kyu (Lee Han Ik). It’s very quick thinking on his part, and he’s spot on. 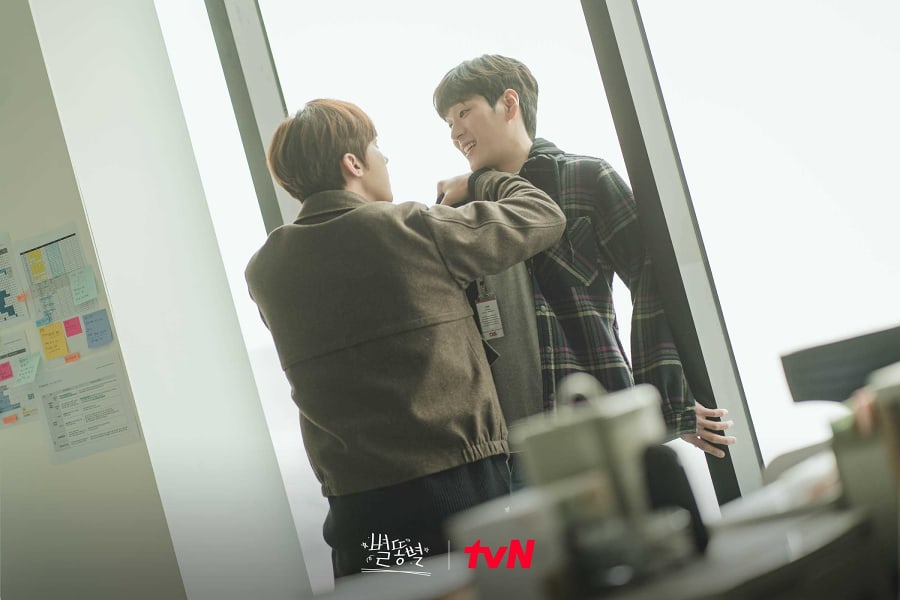 Min Kyu’s been posting baseless rumors everywhere and sending them to reporters who gleefully parade them as truth. Yoo Sung has Min Kyu arrested and sued with Do Soo Hyuk (Lee Jung Shin, doing a fantastic job really) going after him without mercy. It’s actually pretty heartwarming seeing how many guy friends Tae Sung has in his corner. Byun Jung Yeol (Jin Ho Eun) is there for him without fail. Do Soo Hyuk even makes him a latte and advises him not to cower because that’s what antis want. And Yoo Sung almost beats Min Kyu up. But the snowball’s been set in motion, and the avalanche has only begun. 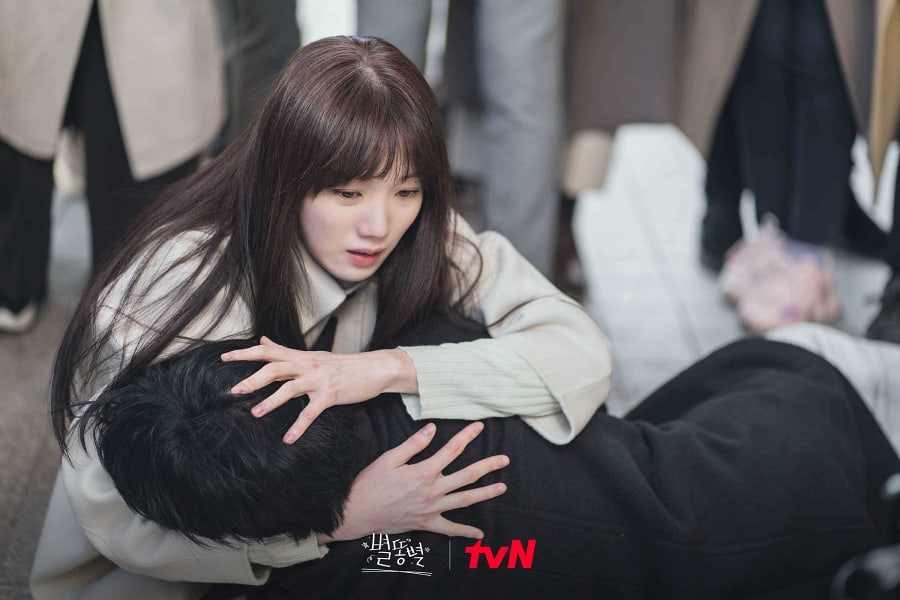 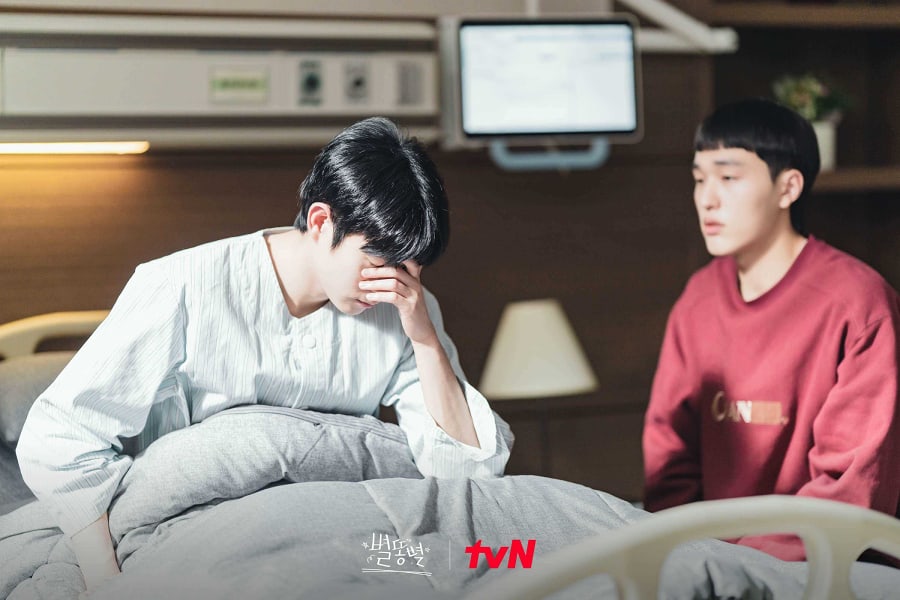 Sometimes it isn’t the content of a rumor that matters but its potential. It doesn’t matter that Min Kyu posts no proof for his claim that Eun Si Woo (Choi Ji Woo) and Tae Sung are dating. The potential exists. Circumstantial evidence makes it the right side of plausible. And everyone loves seeing a star fall. The same public that adored Tae Sung runs with it. Eun Si Woo’s recent divorce is taken as proof of an affair. Tae Sung’s pictures with children during his year of charity work are taken as his secret children (do these people not understand how biology works?). Someone mentions that he hits his staff, and everyone agrees loudly. No matter how hard Han Byul works her magic, people don’t care about the truth. It’s no wonder that Tae Sung collapses.

For her part, Jo Gi Bbeum (Sojin) finally stands up for herself when her boss demands that she write a feature on Tae Sung’s child in Africa (when will they stop referring to it as a country?). She puts Soo Hyuk on speaker phone who makes a point of enumerating just what he’ll do to people who write fake articles for clicks, and her boss shuts up. Soo Hyuk and Gi Bbeum share a drink afterwards, both clearly impressed by the other’s intelligence and work ethic. But despite the PR team, legal team, and Gi Bbeum’s best efforts, Tae Sung is sinking fast. Something has to give. But what if it has to be Tae Sung himself? 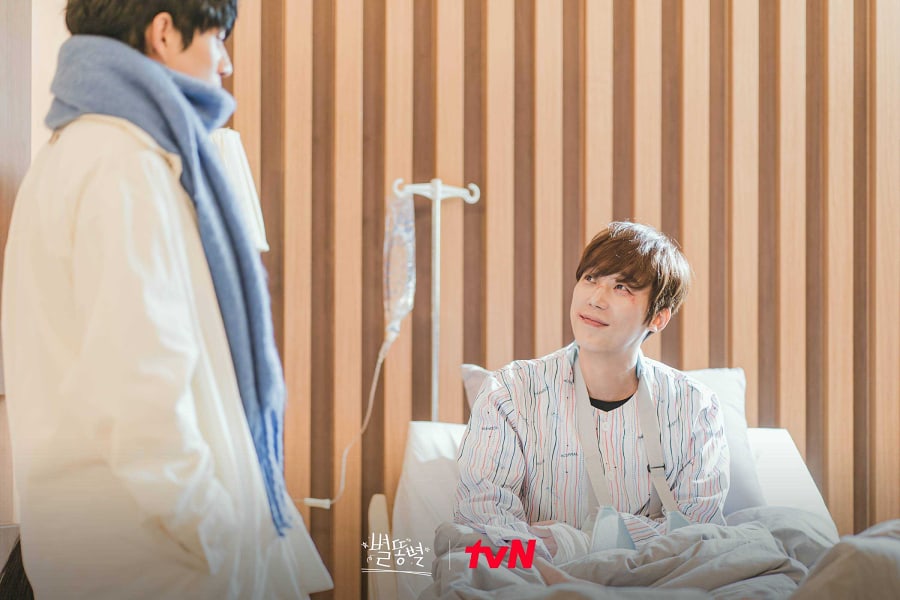 Yoo Sung and Tae Sung have a long history. He was Tae Sung’s first manager and currently his best friend, but they couldn’t be more different. Tae Sung is always one to communicate in matters of work and love, which is an excellent character trait that prevents unnecessary misunderstandings. On the other hand, Yoo Sung keeps his cards close. So it’s no wonder that Tae Sung is shattered when his anti-fan texts him pictures of Yoo Sung and Eun Si Woo at the airport. It’s clear that Yoo Sung is on good terms with her and appears to be welcoming her back to the country, which is what makes this betrayal all the worst. Still, Tae Sung gives Yoo Sung the benefit of the doubt, treating him the same as ever and waiting to hear his side.

But there’s a reason Yoo Sung’s keeping quiet. First off, Eun Si Woo’s secret isn’t his to tell. And second, Tae Sung is currently at the center of a huge scandal involving her. Revealing the truth – that Eun Si Woo has some form of early onset dementia or Alzheimer’s – will send Tae Sung into a tailspin. It’s too much on top of everything he’s handling right now. Third, and worst of all, Tae Sung wants nothing to do with her. She’s the only person who can clear his name and verify that she isn’t his girlfriend but his mother. But Yoo Sung knows how much Tae Sung suffered because of Eun Si Woo, and the last thing he wants is for this woman to claim a place in his life that is not hers. It’s a tangled mess. But as days pass and Tae Sung’s name turns to mud in the public eye, Yoo Sung is forced to tell Tae Sung that they have only one choice to clear his name: reveal the truth. And that’s when everything explodes. It’s an actually painful fight to witness and tears a huge rift between them. 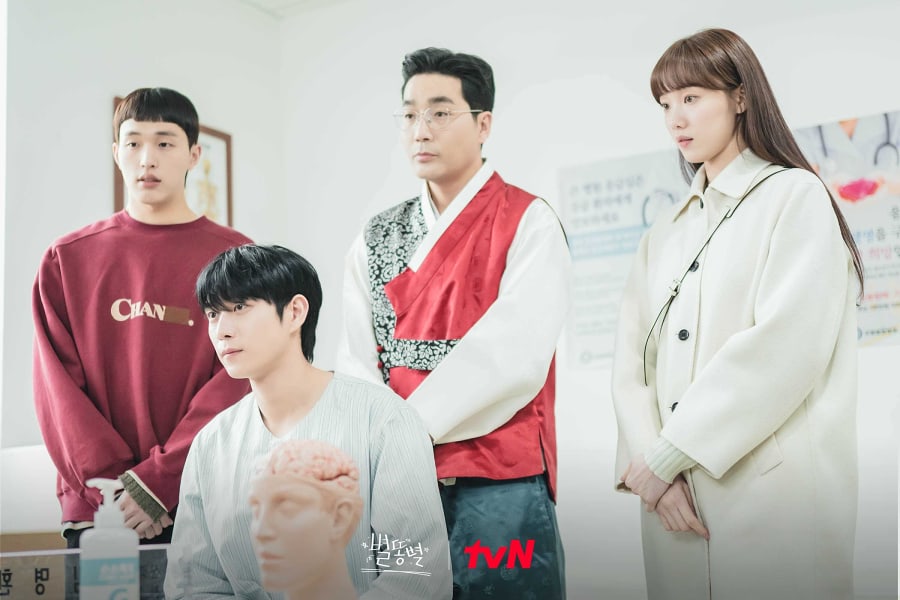 Who owns a celebrity? It’s a strange question but a valid one here. It feels like everyone’s ignoring the very red flags around Tae Sung. Starforce is his found family, but they’re seeing the actor instead of the person. It’s one thing to work hard, but Tae Sung constantly pushes himself. He became a celebrity not out of desire to be one but out of some vague idea of revenge to rise higher than his mother. We’ve never really seen if Tae Sung actually loves being a celebrity. He really just seems like a down-to-earth guy who works hard at his job and just wants to be happy. So, when he’s informed that Starforce is planning on telling everyone the truth about Eun Si Woo being his mother, Tae Sung tearfully tells Yoo Sung that he’s just like any other manager: protecting his product. The accusation hurts Yoo Sung so badly that he decides to spill the beans about Eun Si Woo’s condition then and there, but it’s too late. Tae Sung doesn’t want to hear it. 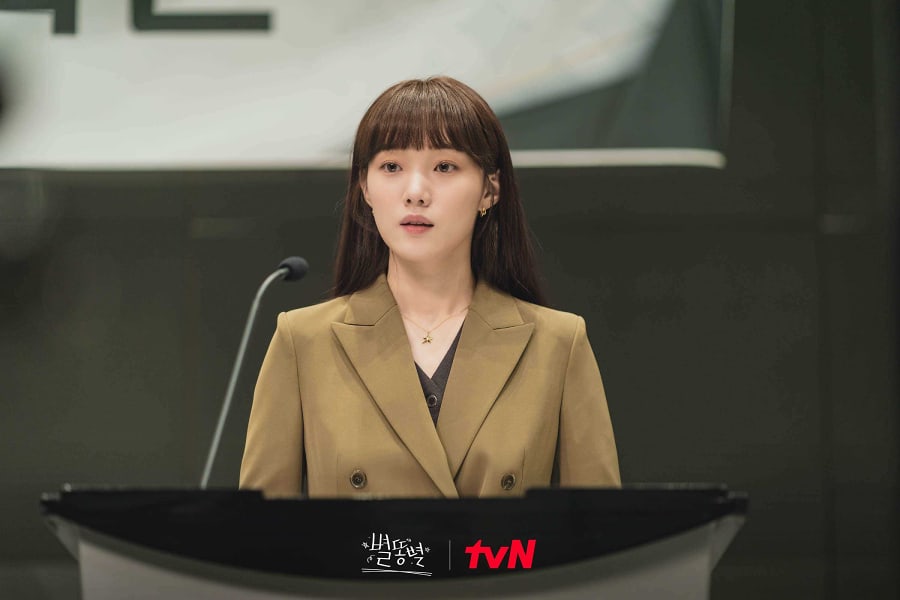 Han Byul also knows that there’s no other way to save Tae Sung’s career. Meeting with Min Kyu provides zero clarity as he reveals the reason for his hatred. Min Kyu was a huge fan of Lee Yoon Woo (Im Sung Kyun), an actor at Starforce and Tae Sung’s friend. After Yoon Woo’s death, Min Kyu attended the funeral, but Tae Sung was on TV at a fan meeting, smiling widely. That was the start of Min Kyu’s vendetta. It’s a ridiculous grudge to hold considering that Min Kyu has been a manager now and knows that Tae Sung very likely didn’t get to do what he wanted back then. It’s just like Eun Si Woo, who wanted to race to Tae Sung when she got his call all those years ago but was stopped by her manager who is now head of Starforce (Tae Sung is going to have a fit if he finds out). Their lives are not their own. Both the grudge, the rumors, and the fallout over the only solution stem from only one question: who owns a celebrity?

Min Kyu nastily mutters that Han Byul should have protected Yoon Woo, then none of this would have happened. And Han Byul, who has clearly felt guilty all these years, tearfully agrees. Clearly, something happened with Yoon Woo and rumors that resulted in him taking his life. It’s fear of the past repeating that propels Han Byul to hold a press conference with Eun Si Woo, especially since she’s just seen the man she loves collapse under the weight of stress. But to a horrified Tae Sung watching online, it’s a betrayal. Will this be what breaks them apart? 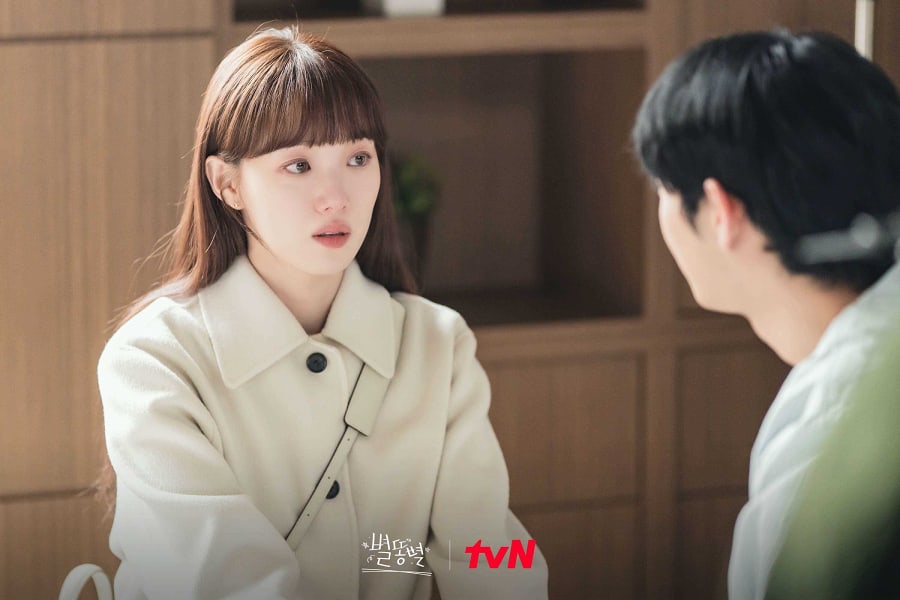 The show ends before we see what Eun Si Woo says, but judging by the preview, Tae Sung and Han Byul are about to have a massive fight. Is it wrong for Han Byul to want to save his career at the expense of him acknowledging the mother who shaped and ruined his life? Is Tae Sung right to argue that Yoo Sung and Han Byul should be considering what he, the person, wants instead of focusing on his career? This is actually a pretty great conflict. Next week can’t come fast enough with answers. Hopefully they’re the good variety! Everyone at Starforce deserves some sunshine after the storm, and we need more of Han Byul and Tae Sung being adorable because they’re too cute!

Park Ho Young (Kim Yoon Hye) was hilarious this week, scurrying away from Yoo Sung. It was equally sweet when she returned his head pats back to him and comforted him when he was upset after fighting with Tae Sung. Another ship just might sail!