After eight weeks of crime fighting, “Again My Life” and its hero have reached the end of the line. Jo Tae Seob (Lee Kyung Young) remains the final domino that Kim Hee Woo (Lee Joon Gi) must topple. But his henchmen make for formidable opponents during Hee Woo’s fight to reach the last boss. Old enemies rear their heads for a final showdown, and ambivalent allies come through in the last hour. So who’s left standing at the end? Read on to find out!

Here are five characters whose fates were irrevocably changed in the finale! 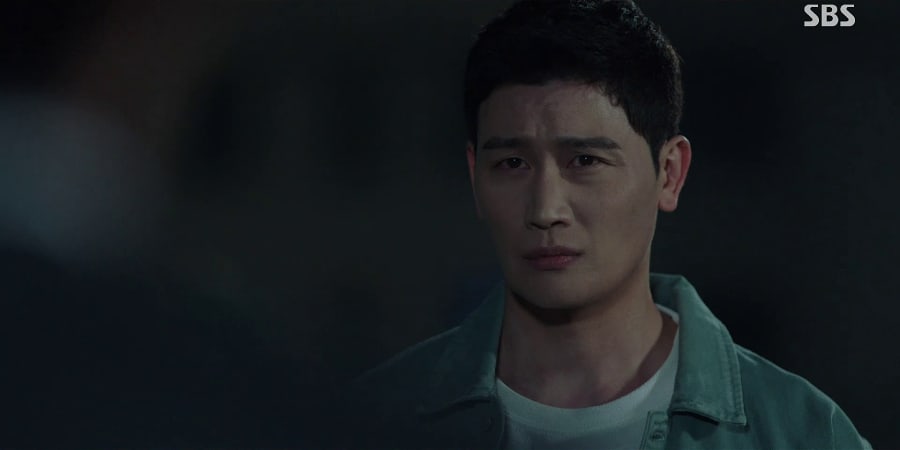 As the up-and-coming investor CEO who purchases the construction company Tae Seob had his eye on, none of Hee Woo’s friends was in more danger than Park Sang Man (Ji Chan). Hee Woo warns Sang Man not to head out anywhere on his own and to always take Lee Yeon Seok (Choi Min). Naturally, Sang Man doesn’t heed the warning, resulting in Dr. K (Hyun Woo Sung) successfully throwing him off the same building that killed Hee Woo. Surprisingly enough, Sang Man survives the fall but is left in a coma for the bulk of the show’s finale. It’s equally hard to believe that Tae Seob just leaves Sang Man as is without pulling the classic poison-in-IV-drip maneuver that he’s already used on Kim Hee Ah’s (Kim Ji Eun’s) father. Somehow, Sang Man manages to cling to life and fully recovers by the end. It’s a bit unbelievable, but hey, he deserves a win!

Han Ji Hyun (Cha Joo Young) has been a silent, steady presence throughout the entire show. Unfortunately, her greatest moments come at the very start, when she gives Hee Woo a new lease on life, and at the very end, where she reveals her trump card. But to understand her, we must return to the day that shaped her into Tae Seob’s ice-cold aide. 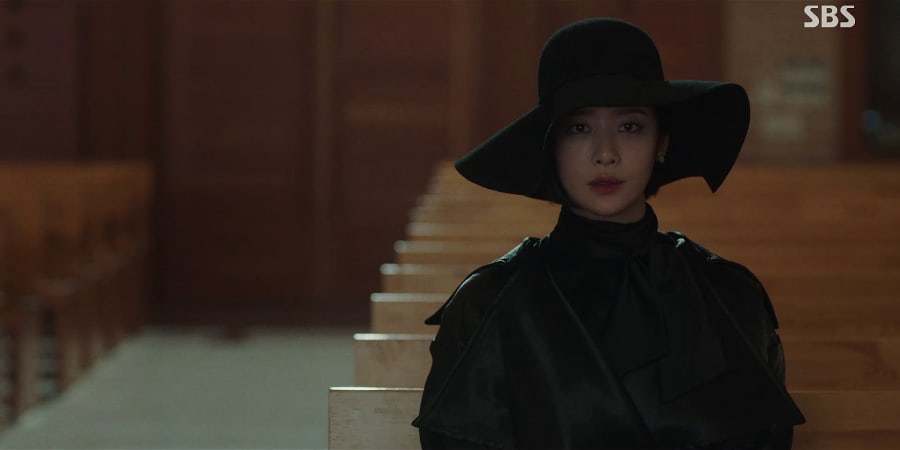 The most overlooked member of Tae Seob’s posse, Kim Jin Woo (Kim Young Hoon), is the worst of them. We find out that he was the one who set fire to the orphanage that housed Han Ji Hyun (Cha Joo Young) and her brother, Hee Woo’s nemesis, Dr. K. Tae Seob ran in himself, using his own body as a shield to save the kids from a burning room. (Really, where did that man go, and how did he turn into the fellow who casually orders murder sprees now?). Ji Hyun overhears Tae Seob roaring at Jin Woo for setting fire to a building with kids inside. Jin Woo is defiant, saying that he’d do it again, anything for Tae Seob. Yikes. As a result, a traumatized Ji Hyun grows up resenting Tae Seob while her brother grows up idolizing the man who rescued him from the fire. It all makes sense. 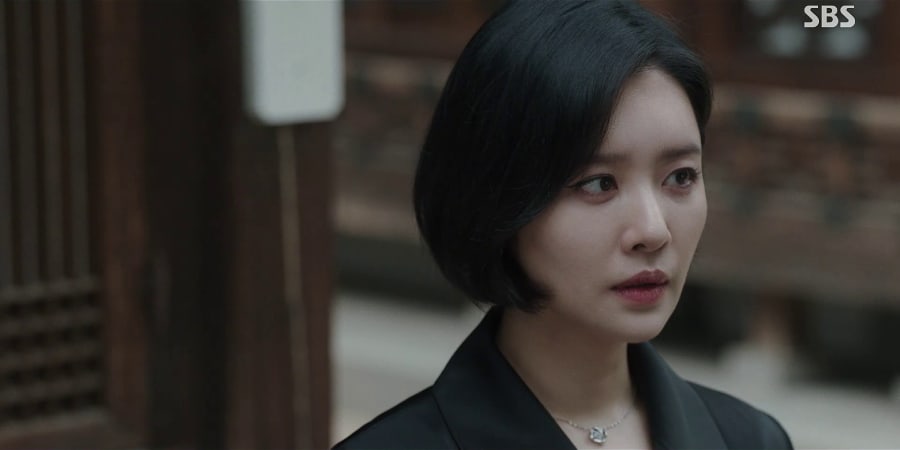 Ji Hyun finally teams up with Hee Woo in the finale, having stayed by Tae Seob’s side out of fear of how easily he could ruin her if she tried to go against him. Completely unprompted, she sits down with the wonderful Kim Han Mi (Kim Jae Kyung) for an interview, exposing Tae Seob to the world. It’s a take-down that shatters Tae Seob’s public image in a way that even Hee Woo wasn’t able to do because Ji Hyun was by his side for so long. It’s sad in the sense that Ji Hyun acknowledges that Tae Seob didn’t start out with bad intentions. But his quest to amass power to do good turned him into the very sort of monster he abhorred. 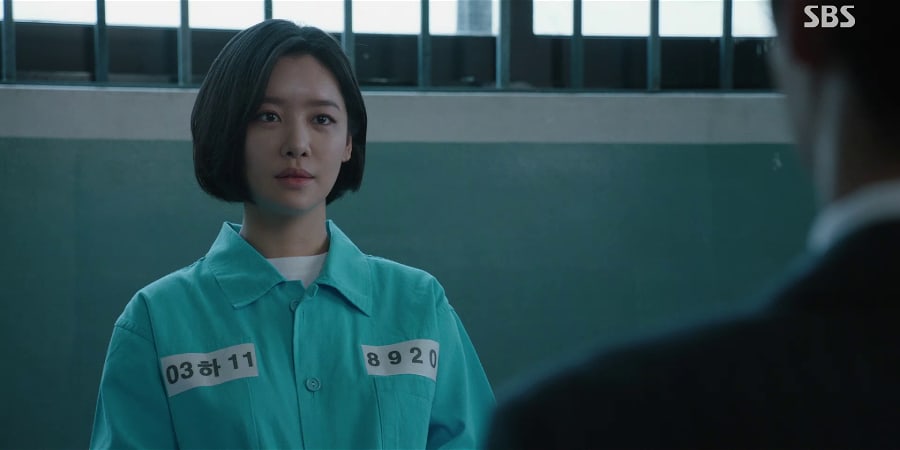 Ji Hyun ends up going to prison, but it’s far better than the death she suffers in the initial timeline. Plus, Hee Woo indicates that he’s happy to welcome her into his circle when she’s out. Thus, he repays Ji Hyun’s gift of a second life by giving her, her own. 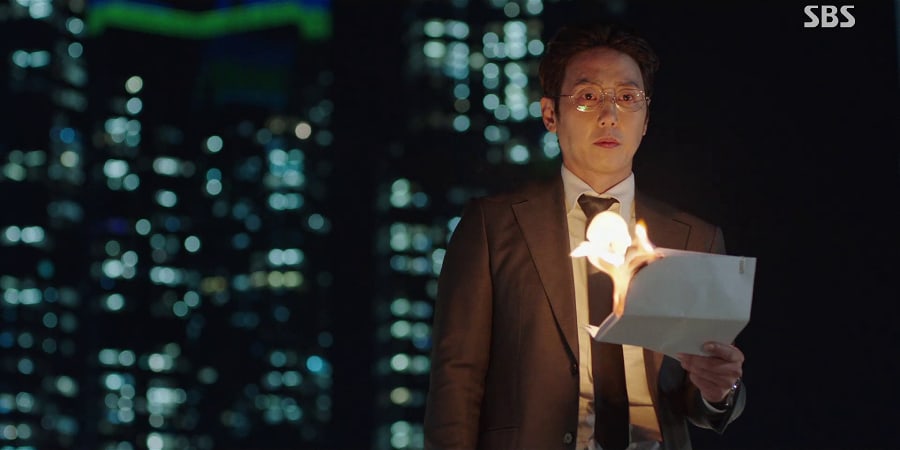 Loyal to Tae Seob to a fault, Jin Woo was never going to take Hee Woo’s offer of turning traitor. It’s a shame we didn’t get to see more of this character (and of Dr. K) because they’re fascinating examples of blind loyalty. Jin Woo, in particular, was Tae Seob’s attack dog, going above and beyond to ensure Tae Seob’s safety. When a cornered Hee Woo exposes Jin Woo’s misdeeds to the press, the latter chooses to jump off the same building where Hee Woo (and almost Sang Man) met their ends. His death devastates Tae Seob, who breaks down. It also points out what might be the show’s biggest flaw: rushed characterization. Nowhere is this more evident than in Tae Seob and Jin Woo’s relationship. We had no clue how close they were and how much Jin Woo meant to him. If we had known Jin Woo better and known Tae Seob’s regard for him, Jin Woo’s death would have been a bigger moment. As it was, it fell flat. And this isn’t the only time that this happens. 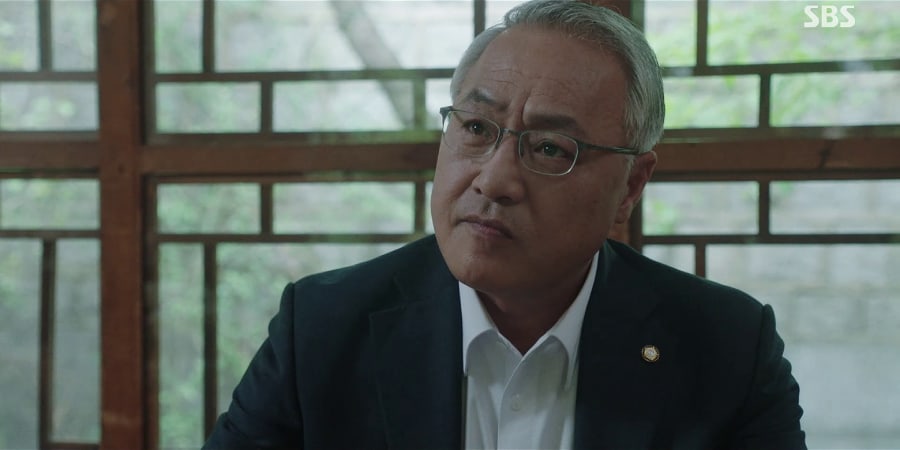 The biggest issue with Tae Seob as a character has been his inscrutability. We know he was a former prosecutor with a sense of justice, but we never see his evolution from just to corrupt. We see him kill people off one second and rush into burning buildings to save children in another. Who is the real Tae Seob? How does such an intelligent man justify his actions to himself? Does he really look at his laundry list of murders and tell himself that they don’t matter because they’re for the better of a country? He knows that many of the people he kills are innocent. When did that change in character happen? These are but some of the questions that keep Tae Seob from being a truly great villain. Every time he spews his spiel about doing things for the benefit of South Korea, you can’t understand where this is coming from. It makes you wonder just what has Tae Seob actually done for the country. All we see is corruption, murder, shady deals, and the supposed “sacrifices” that he is making for the greater good. But where is the good? Has he built schools? Roads? Better infrastructure in rural areas? We don’t know, and that leaves matters pretty hollow because an evil man who does good things is so much more interesting as a villain. 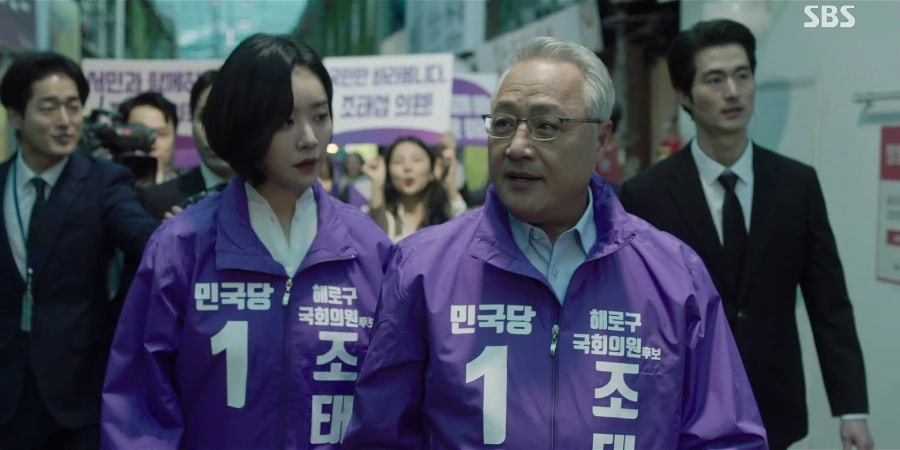 Plus, Tae Seob seems pretty inconsistent with whom he kills. He’ll happily kill an actress to ensure that Chunha Group falls into his hands, but other than Sang Man, he doesn’t attempt to kill any of Hee Woo’s circle. It feels a little like “Again My Life” removed his claws and teeth for the finale to make it easier for Hee Woo to punch him down, and it shows. Perhaps this is why his ending is left ambiguous. Rather than mounting a wide-ranging assault on Hee Woo after Ji Hyun’s exposé, Tae Seob vanishes with a waterlogged body found in a lake that may or may not belong to him. It’s an unknowable end for a man who was equally unknowable.

5. Hee Woo: ventures into politics and takes over Tae Seob’s seat as a benevolent politician 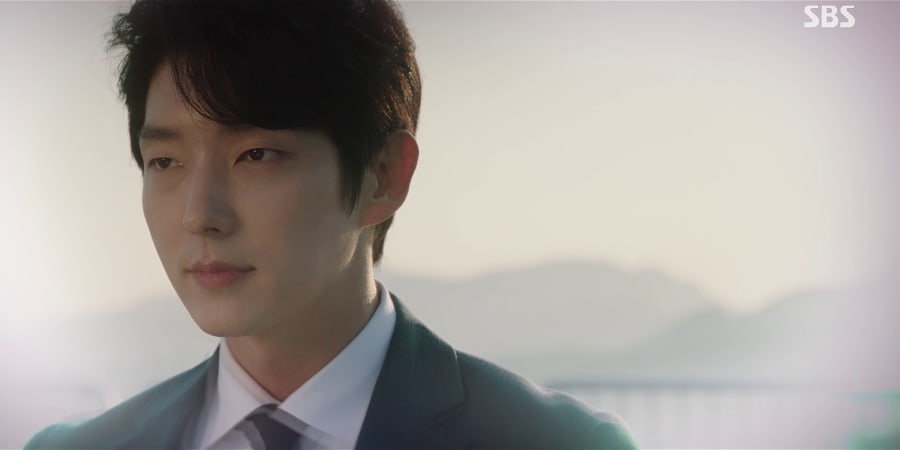 It feels as though this show was heavily focused on realism and showing just how convoluted and intertwined politicians, the prosecution, and the corporate world are. It certainly succeeded but at the expense of characterization and character momentum. Hee Woo has pretty much no character arc. He’s the same from start to finish. There’s so much crammed into his life that this turned into the Lee Joon Gi show. Ironically, his sudden switch from prosecutor to assemblyman-in-running at the 11th hour felt like whiplash and threw realism out of the window in order to give us a decent ending.

In the first episode, Grim Reaper Ji Hyun tells Hee Woo that he’ll have to become as bad as Tae Seob in order to tear him down. It felt as though we were being set up for a darker story of Hee Woo’s slow climb up the ladder as he grows darker and darker to catch his nemesis. But we never really see that. Everything is a little too rosy. We never see Hee Woo actually go unhinged until he confronts Jin Woo on that fateful rooftop before Jin Woo’s death. 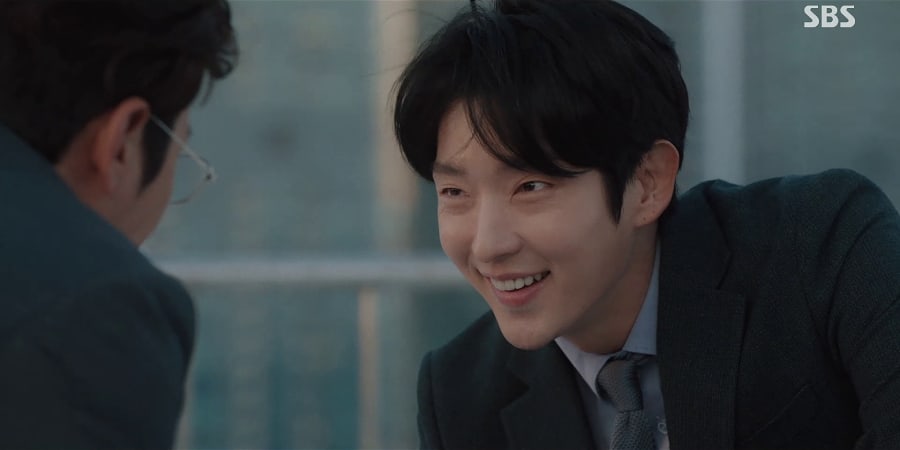 Now, if only we had more of this!

Moreover, Jeon Seok Kyu (Kim Cheol Gi) and Lee Min Soo (Jung Sang Hoon), who supposedly betrayed Hee Woo, turn out to have been attempting to sacrifice themselves to keep him safe. Hee Ah, who has had less screen time and screen presence than Ji Hyun, is suddenly dating Hee Woo. And Hee Woo, with no experience as a politician, is suddenly an ace assemblyman. It figures that he’d be good at everything. It’s a great ending on paper. Hee Woo takes the same path as Tae Seob by going from prosecutor to politician but actually uses his position to help others in a way he couldn’t as a prosecutor. The issue is that this entire part is implied. All we see of Assemblyman Hee Woo is his scandal-mired run up to the election. It sure would have been great if we saw what his life looks like as a politician now! Not to mention that the show ends with every minor villain that Hee Woo put away getting out of jail and forming an alliance with CEO Chun Ho Ryung (cameo by Bae Jong Ok) and her violent lawyer lackey. 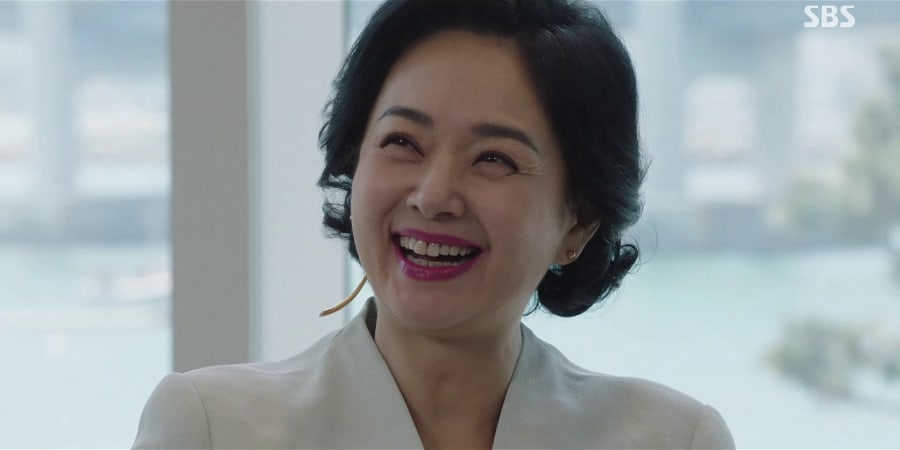 So was all the work Hee Woo did for nothing? Yes and no. On one hand, the show’s trying to comment on the eternal nature of corruption and how the second you cut off one snake’s head, another resurfaces to take its place. On the other hand, snakes can be killed because Tae Seob is officially gone. Most importantly, it wasn’t Hee Woo’s second chance at life that facilitated that removal but the support of the many, many people around him with only one life. So perhaps, it isn’t a second life that matters but making excellent use of the one we have. “Again My Life” wasn’t a perfect show, but as far as takeaways go, that seems like a pretty good rule for living.