5 Of The Most Shocking Plot Twists In “Military Prosecutor Doberman”

The twists and turns in “Military Prosecutor Doberman” are taking its viewers on a whirlwind of a ride!

“Military Prosecutor Doberman” is a drama about two military prosecutors who chose the same job for very different reasons. Ahn Bo Hyun stars as Do Bae Man, an apathetic prosecutor who only took the job for money, while Jo Bo Ah stars as heiress Cha Woo In, who became a military prosecutor for revenge. As both characters take a hand in the revengeful narrative they’re writing together, tensions escalate at an alarming rate. Paired with the immaculate action scenes and carefully orchestrated psychological tug-of-war with the villains, viewers can’t help but stay hooked.

The following are five shocking scenes that left us wanting more!

Episode 3: Red Woo In makes her startling debut in Do Bae Man’s life

From the beginning, it was all part of Cha Woo In’s plan to become a military prosecutor and to get Do Bae Man to join her cause by revealing to him the truth behind his parents’ deaths. In the process, she helped to resurface his forgotten memory regarding the car accident that took his parents’ lives by orchestrating another accident for him to fall prey to.

Oblivious to this, Do Bae Man was simply enjoying meeting up with Noh Tae Nam (Kim Woo Seok), the man who promised him a blissful life after his discharge from the military. But when his aunt Do Soo Kyung (Kang Mal Geum) made an abrupt appearance to make a surprise arrest, Do Bae Man tried to escape and ended up in an unexpected car chase. Just when he thought he had gotten away, his car started showing irregularities and soon flipped over. While trapped and bleeding from his injury, Do Bae Man met “Red Woo In” for the first time. She revealed her identity by saying, “Military prosecutor Do Bae Man, you can’t be discharged. You will end up staying behind and fighting alongside me.” This is a pivotal moment in their relationship, marked by a suspenseful series of events.

Episode 7: Won Ki Choon’s leg is not where it should be

Well into their intricately curated master plan for revenge, Do Bae Man and Cha Woo In faced an unexpected hurdle. All they hope to do is to destroy Noh Hwa Young (Oh Yun Soo) and the Patriotic Association. Naturally, they made it their goal to expose the fake hero Won Ki Choon (Im Chul Hyung), who showed absolute loyalty to Noh Hwa Young. Despite the man being celebrated as a hero who saved his companion from a landmine accident while enduring a leg injury, the two found out that this is all a cover-up for a separate shooting accident. In fact, they realized that his leg is perfectly intact and well. In order to make this known, Do Bae Man exposed Won Ki Choon’s leg in front of a crowd of reporters. But to his surprise, Won Ki Choon’s leg was actually amputated. The scene ended with a chilling look given by Noh Hwa Young who appeared right at this climactic moment.

Episodes 8 and 9: Noh Hwa Young reveals there is no limit to her evil nature

Noh Hwa Young does not discriminate when it comes to who she practices her evil offenses on. In other words, even her most loyal followers can find themselves on the receiving end of brutality when they pose a threat to her. This is what happened to Won Ki Choon, whose leg was amputated by Noh Hwa Young when Do Bae Man and Cha Woo In closed in on the truth behind the landmine accident.

Despite these efforts, Do Bae Man and Cha Woo In secured evidence to support their case in exposing the fake hero story. They held a press conference where they presented the truth, pushing No Hwa Young and Won Ki Choon into a corner. But soon afterwards, Won Ki Choon was found dead with a gunshot wound to his head. With his death ruled as a suicide, Noh Hwa Young escaped the grasp of her chasers. Even when it was later revealed that she is behind Won Ki Choon’s death and responsible for making it look like a suicide, there was no way to refute her alibi. Viewers were left in absolute shock at how merciless and cold-hearted Noh Hwa Young was in eliminating her companion, whom she only viewed as a hindrance.

Tensions heightened as the main players of this mind-grueling game of revenge came to an ultimate face-off. Noh Hwa Young and Yong Moon Goo (Kim Young Min) came to know of the truth behind Do Bae Man’s and Cha Woo In’s parents. At this realization, both chose to take the issue head on. Noh Hwa Young visited Do Bae Man and stated, “So you’re that kid. The kid that I saved.” Enraged but keeping his anger at bay, Do Bae Man replied, “I am thankful for you having saved me then.” As for Cha Woo In, she fought her own battle with Yong Moon Goo who came to know of her “Red Woo In” persona. She in turn threatened that she’ll go to Noh Hwa Young with proof that he made Noh Tae Nam run away to the military in order to secure his spot as the chief of IM Defense. It became obvious that the situation will only escalate from there, making viewers grab on for what’s to come.

Episode 12: No end in sight for Noh Tae Nam’s struggles

The ending of episode 12 was the ultimate cliffhanger, implying that something big was just around the corner. After deserting his post, Noh Tae Nam was assigned to the frontlines. He was shocked to find out that Sergeant Ahn Su Ho (Ryu Seong Rok), who had been especially kind to him, was actually the man behind the special privileges case. It turns out that Sergeant Ahn Su Ho knew of Noh Tae Nam all along thanks to being previously informed by Do Bae Man. When he realized that Noh Tae Nam was also catching on to this, his attitude changed 180 degrees, even conducting forms of violence. The scene closed with a blood-covered Noh Tae Nam holding a pistol in his hand, surrounded by soldiers fallen dead by gunshot. 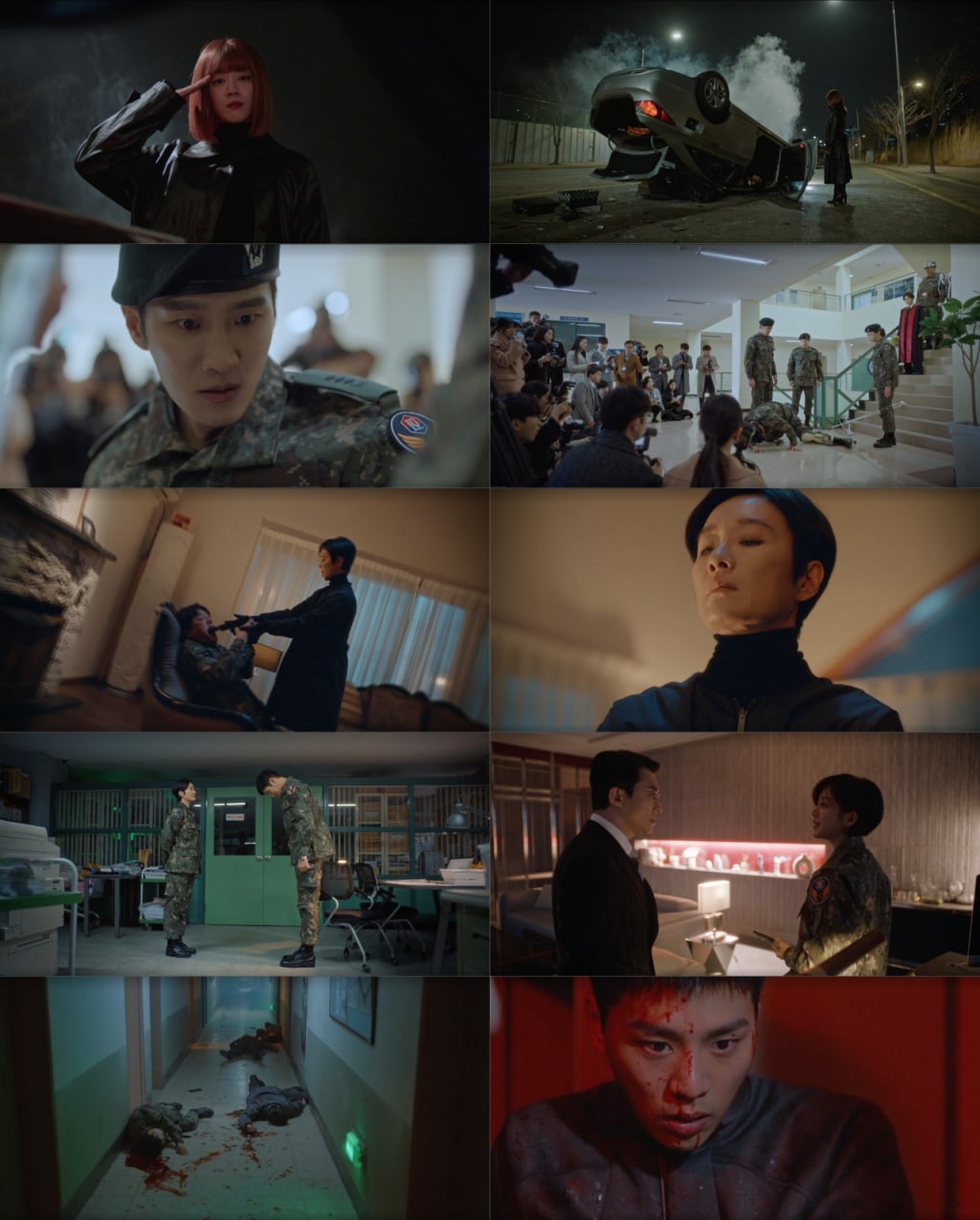