Gaon Chart has revealed its chart rankings for the week of April 10 to 16!

BIGBANG achieved a double crown this week after their latest hit “Still Life” held onto its spot at No. 1 on both the overall digital chart and the streaming chart.

(G)I-DLE’s hit song “TOMBOY” similarly maintained its position at No. 2 on both charts, while IVE’s “LOVE DIVE” rose to No. 3 on the overall digital chart.

Red Velvet’s “Feel My Rhythm” stayed strong at No. 4, and MeloMance’s “Love, Maybe” (from the OST of “A Business Proposal”) continued to round out the top five this week. 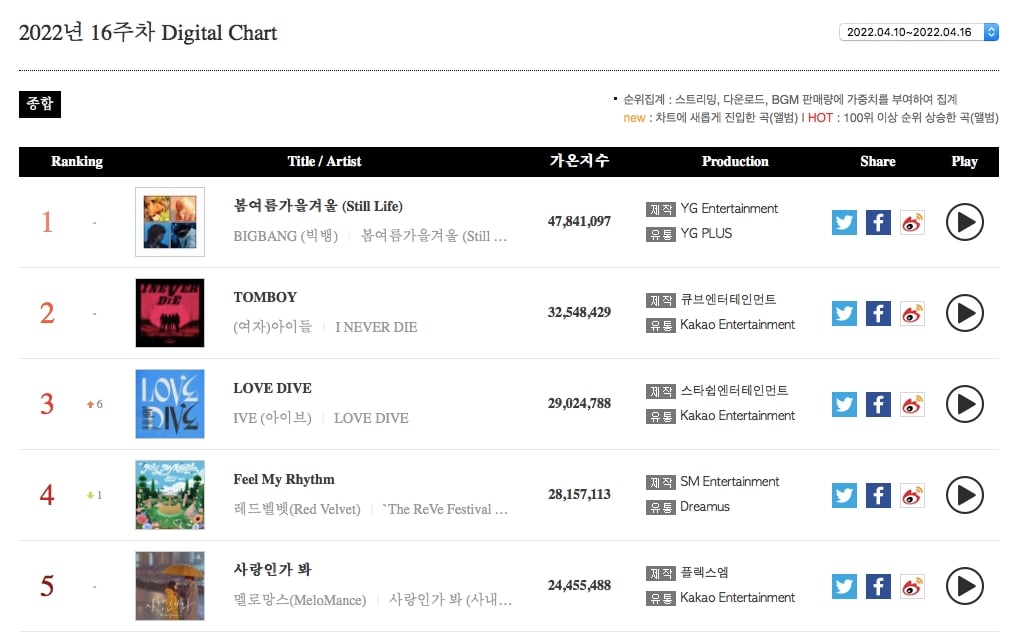 The top five songs on this week’s streaming chart were almost exactly the same as the overall digital chart: BIGBANG’s “Still Life” remained No. 1, while (G)I-DLE’s “TOMBOY” and Red Velvet’s “Feel My Rhythm” held onto their respective spots at No. 2 and No. 3.

IVE’s “LOVE DIVE” climbed to No. 4 on the streaming chart this week, followed by MeloMance’s “Love, Maybe” at No. 5. 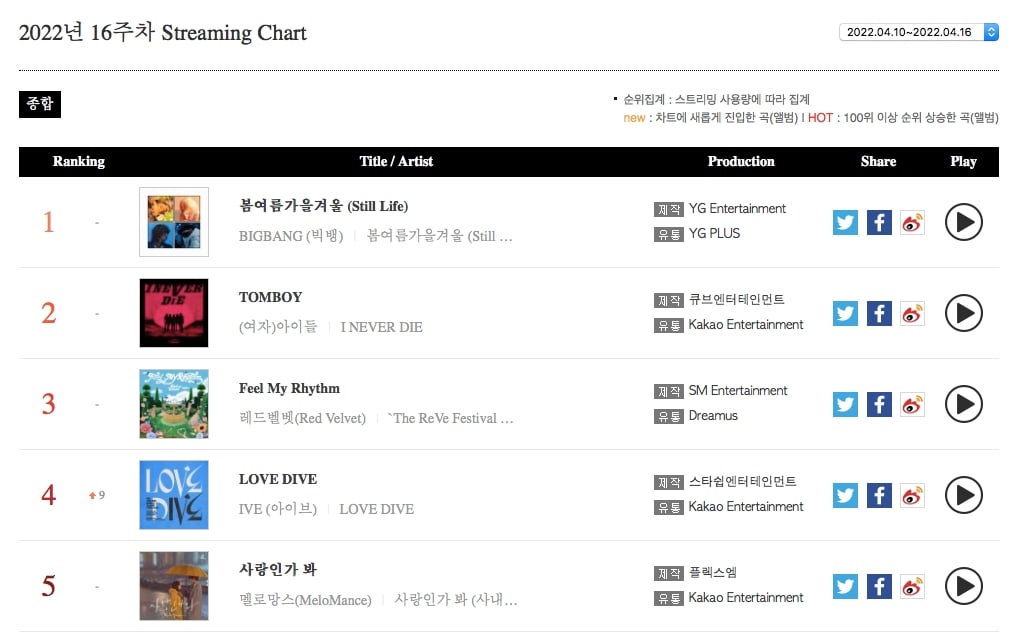 SHINee’s Onew’s new solo track “DICE” debuted at No. 1 on this week’s digital download chart, trailed by BIGBANG’s “Still Life” at No. 2 and IVE’s “LOVE DIVE” at No. 3.

SEVENTEEN’s new pre-release single “Darl+ing” entered the chart at No. 4, while NCT’s Taeyong and Wonstein’s collab track “Love Theory” debuted at No. 5. 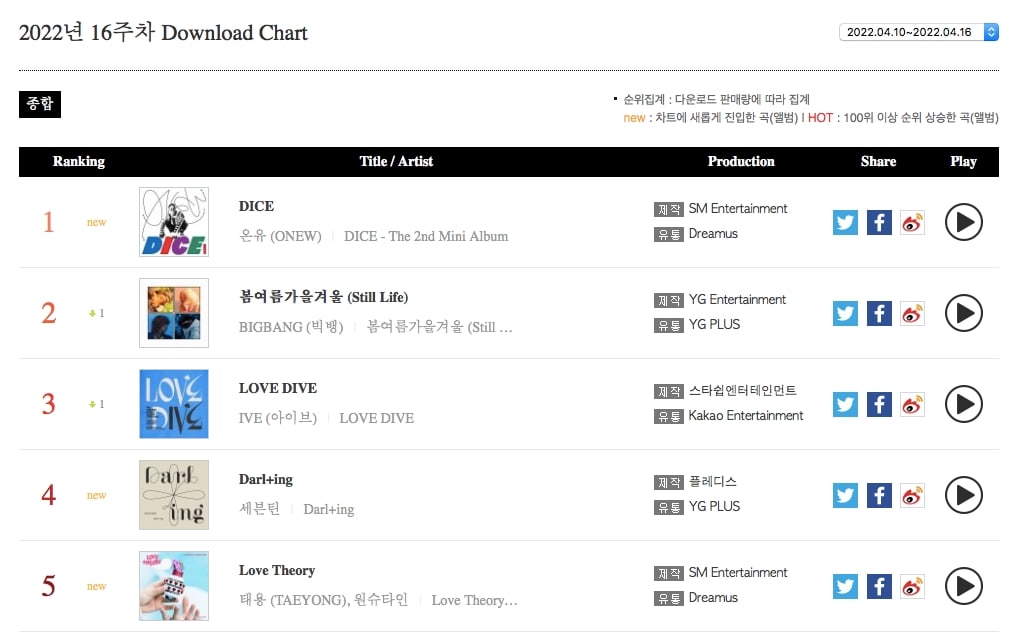 Nearly a month after its initial release, Red Velvet’s “The ReVe Festival 2022 – Feel My Rhythm” rose to No. 1 on this week’s physical album chart.

NCT DREAM’s “Glitch Mode,” which previously debuted at No. 1 on the chart, also climbed back up to No. 2 this week.

The next three spots on the chart all went to new releases: Onew’s new solo mini album “DICE” entered the chart at No. 3 this week, while Dreamcatcher’s “Apocalypse : Save us” debuted at No. 4 and EPEX’s “Prelude of Anxiety Chapter 1. ’21st Century Boys’” followed at No. 5. 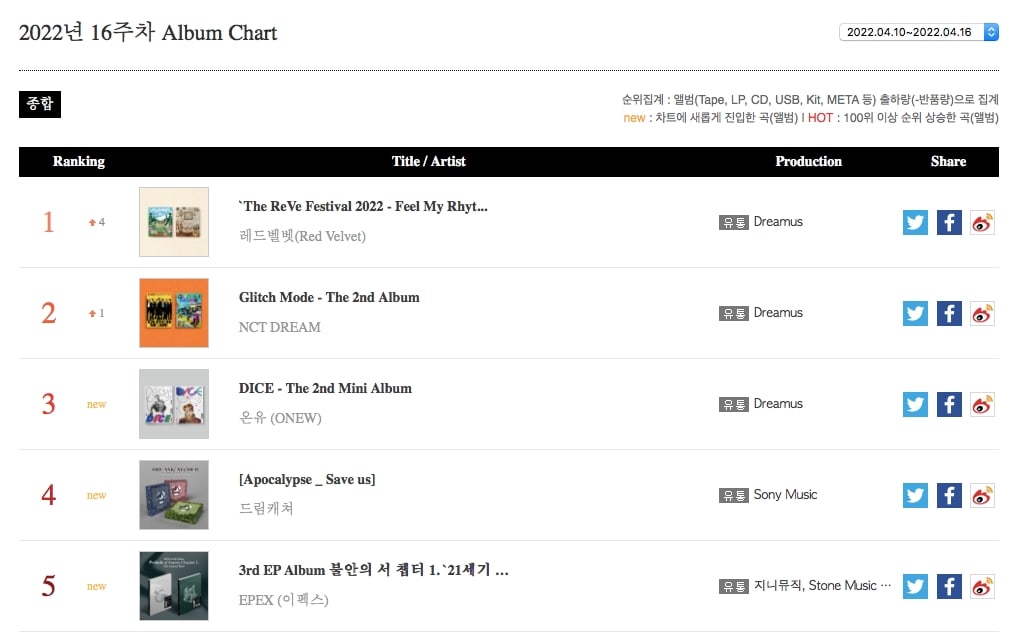 The top four artists on this week’s social chart were exactly the same as last week: BTS remained No. 1, followed by BLACKPINK at No. 2, BLACKPINK’s Lisa at No. 3, and Lim Young Woong at No. 4.

Finally, TREASURE shot up 13 spots in the rankings to claim No. 5 for the week. 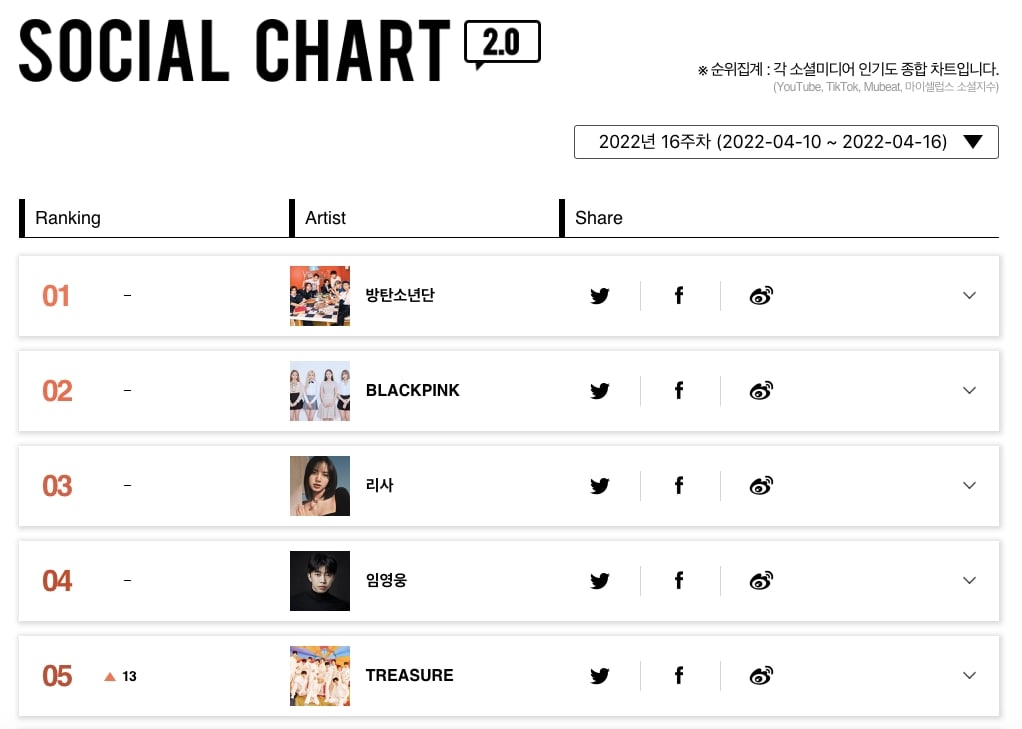