Hyeri Reveals How She Deals With Negative Comments, Her Life Motto, And More

Girl’s Day’s Hyeri recently participated in a pictorial and interview for GQ Korea!

In the interview, Hyeri shared some observations and changes she made regarding her lifestyle. “I saw a piece of writing somewhere that said, ‘The best gift I can give to myself is a meal I made myself,'” she recalled. “I realized in that moment that I needed plates. I was the type of person who usually just ordered delivery food and ate it the way it came. Now, I plate my food nicely and am trying to eat better.”

Hyeri also talked about how she has become more conscious of the environment as she said, “I’m working hard to make small steps toward being more eco-friendly. I bought tissues made from milk cartons, biodegradable wet wipes, dish soap, and sponges made from natural material. I’m also trying to use a glass straw whenever possible.” 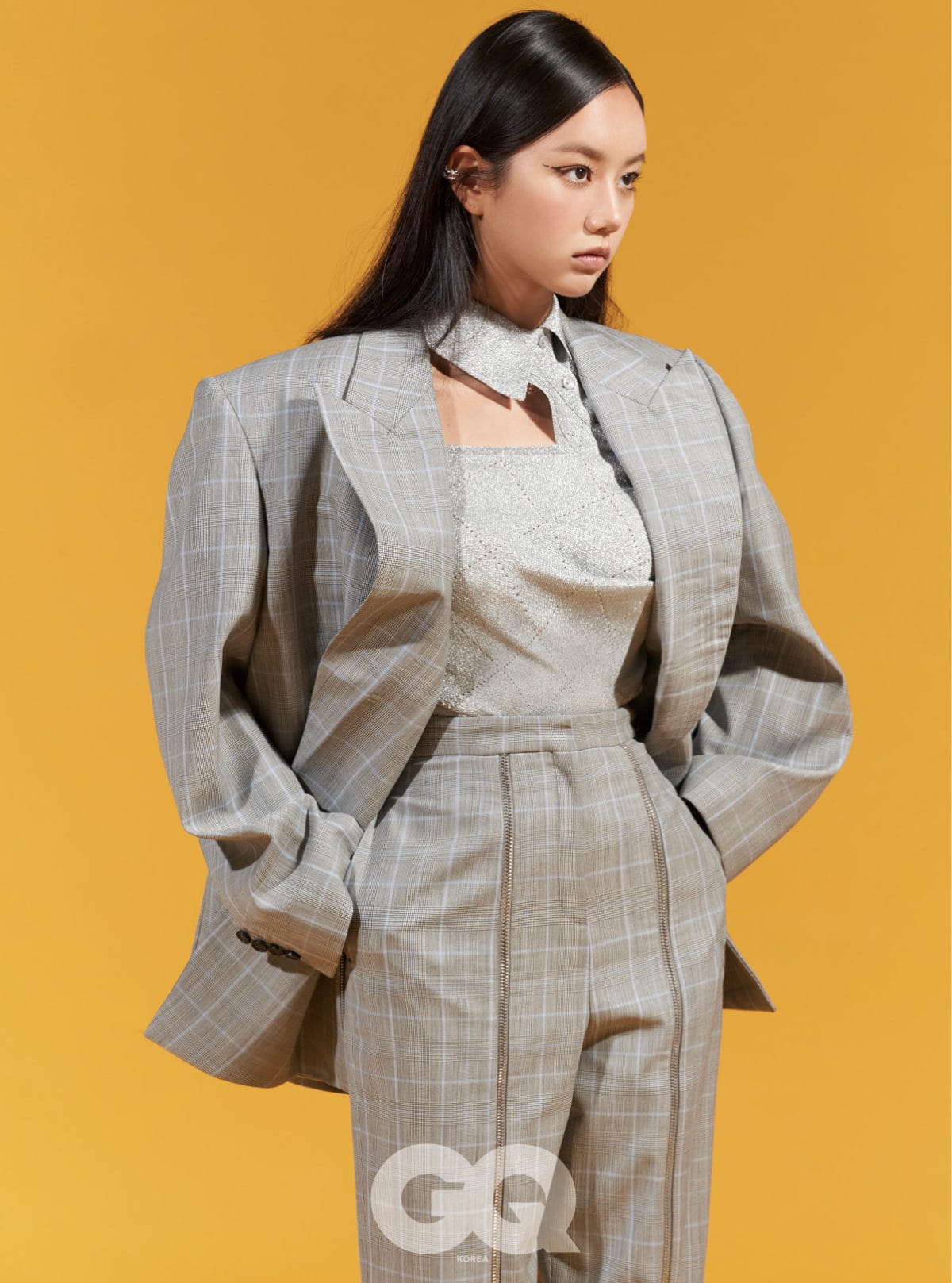 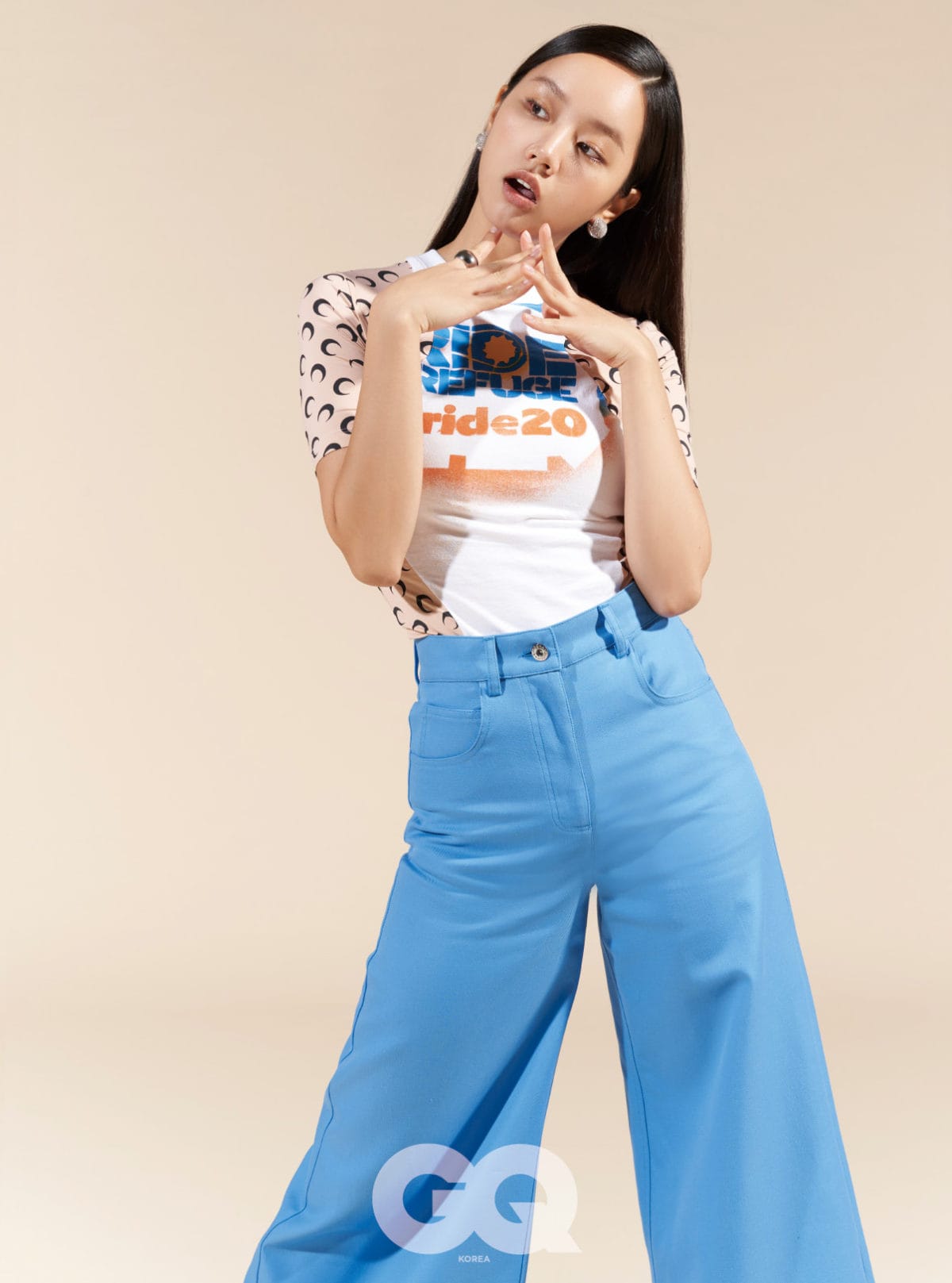 The actress then shared details on an acting study group she began under the guidance of her close friend and fellow actress Park Kyung Hye. When asked what kind of feedback she had been receiving from her acting coach, Hyeri responded, “Previously I put a lot of focus on my expression. However, to create a more effective portrayal in front of the viewers, I realized that it was important to start from the essentials like understanding why I’m delivering these lines and why I’m acting the way I am. The expression comes after that.”

Hyeri described how she works together with the other actors in her study group. “When we’re given a scene, we all take on the same role, but you know what’s interesting? We all portray it differently,” she remarked. “When we all share our different interpretations, we say how it didn’t quite seem right or how it was an amazing idea. We all evaluate each other with honesty.”

GQ’s monthly theme in this issue is family, and more specifically family mottos. Hyeri shared that while her family didn’t have a specific motto, her mother once told her, “Live with honesty.” She reflected on how she lived out that motto as she shared a time in elementary school when she had to write down her own personal motto and she had chosen, “Live life admitting the things you must.”

Hyeri continued, “I still clearly remember when I presented that. I stood up in front of 40 of my classmates and read it, and I was scolded by my teacher. My classmates had all written mottos like, ‘Study hard,’ ‘Listen to your parents,’ or ‘Always do your best.’ When the teacher heard what I’d written, they asked me what it meant and to explain myself. So I said, ‘Whenever something happens, I think it’s important to acknowledge that.'” 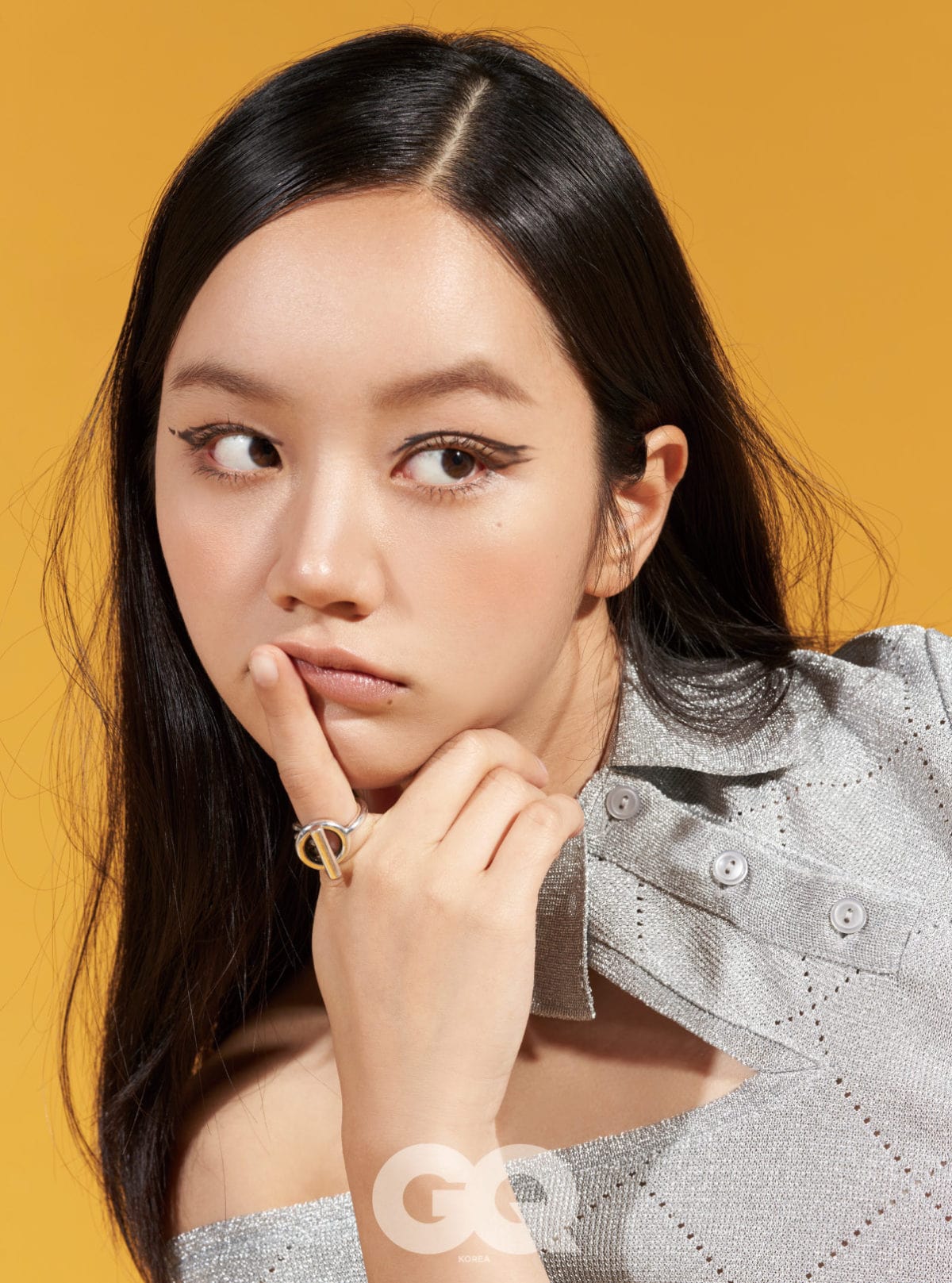 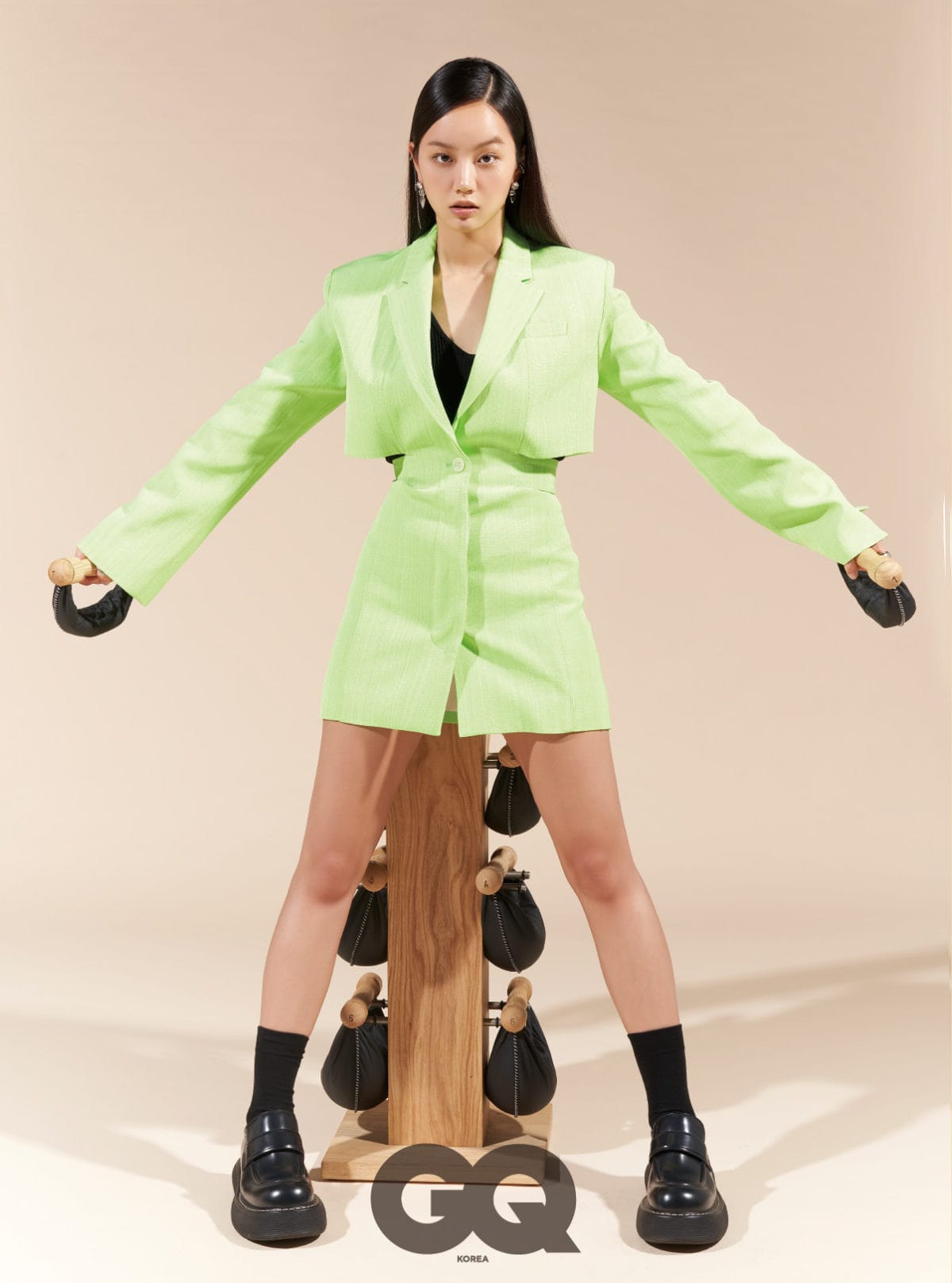 The interviewer challenged Hyeri to come up with something that she just couldn’t acknowledge, and Hyeri responded with her MBTI (Myers-Briggs Type Indicator). “My MBTI is ESFJ. When MBTI was really popular, there was this thing where your friends could check sentences about what kind of person they thought you were,” she explained. “Most of them pegged me as ESTJ. The difference between F and T is big, right? F means you sympathize with your friend when something happens, and T means you offer a solution. I’m definitely F!”

Hyeri reflected back on one of her own worries from the previous year, saying, “I have definite boundaries between my work and my personal life. Even if they’re someone I’m really fond of, if they make a work-related mistake I talk to them in a straightforward manner. Even if we’re close, work is work.”

She continued, “One time, something like this happened. There was someone who I really liked, and we were working together. Later on, I found out that they had been thinking I didn’t like them, and I was really taken aback. I started to worry. Was it my straightforward attitude? Should I have spoken to them more gently? Was it wrong to be honest? Do I need to change who I am? At the end of all this questioning, I found the answer. I realized that when we were connecting during our personal lives I should express my affection for them as much as I can.” 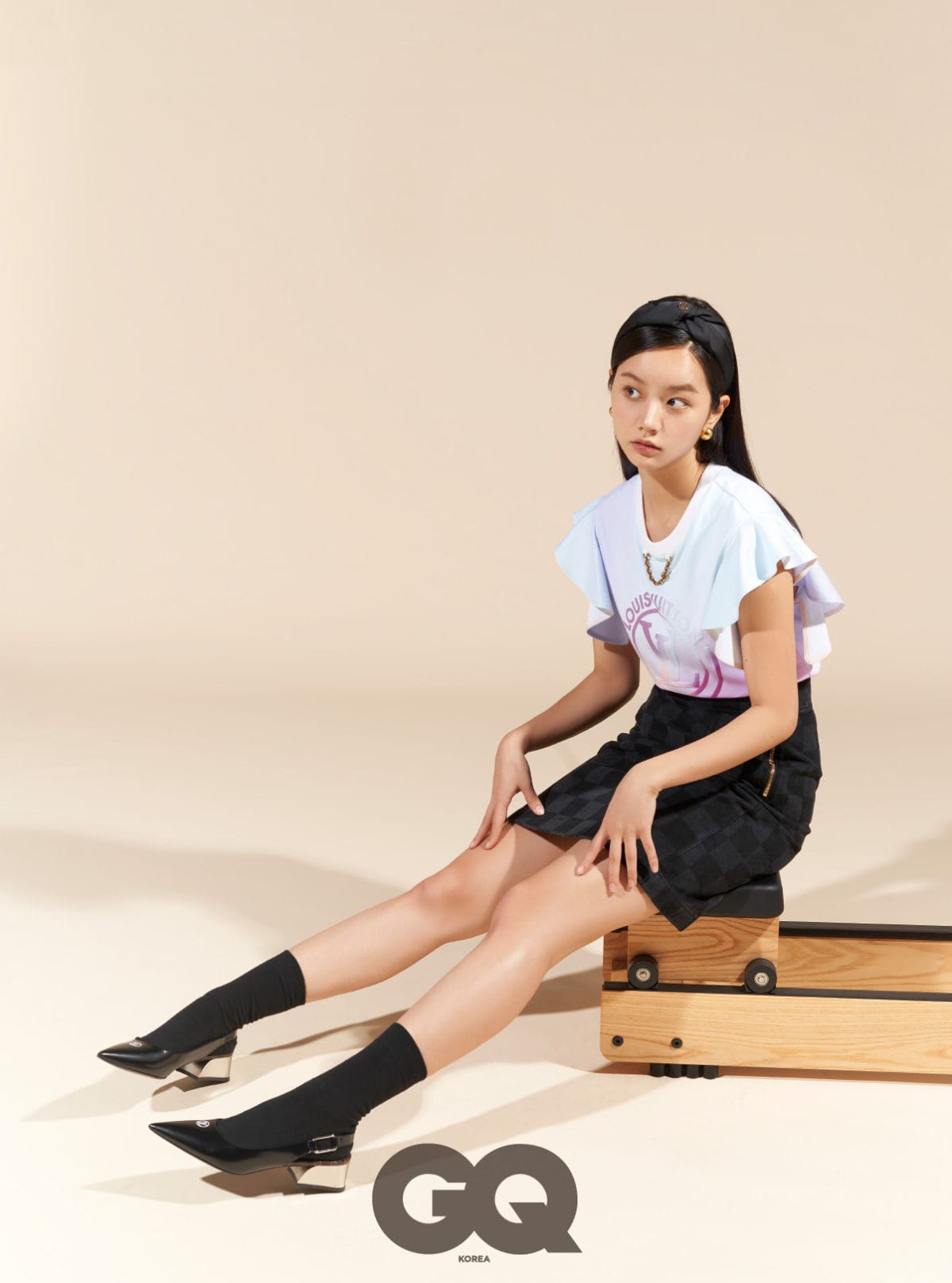 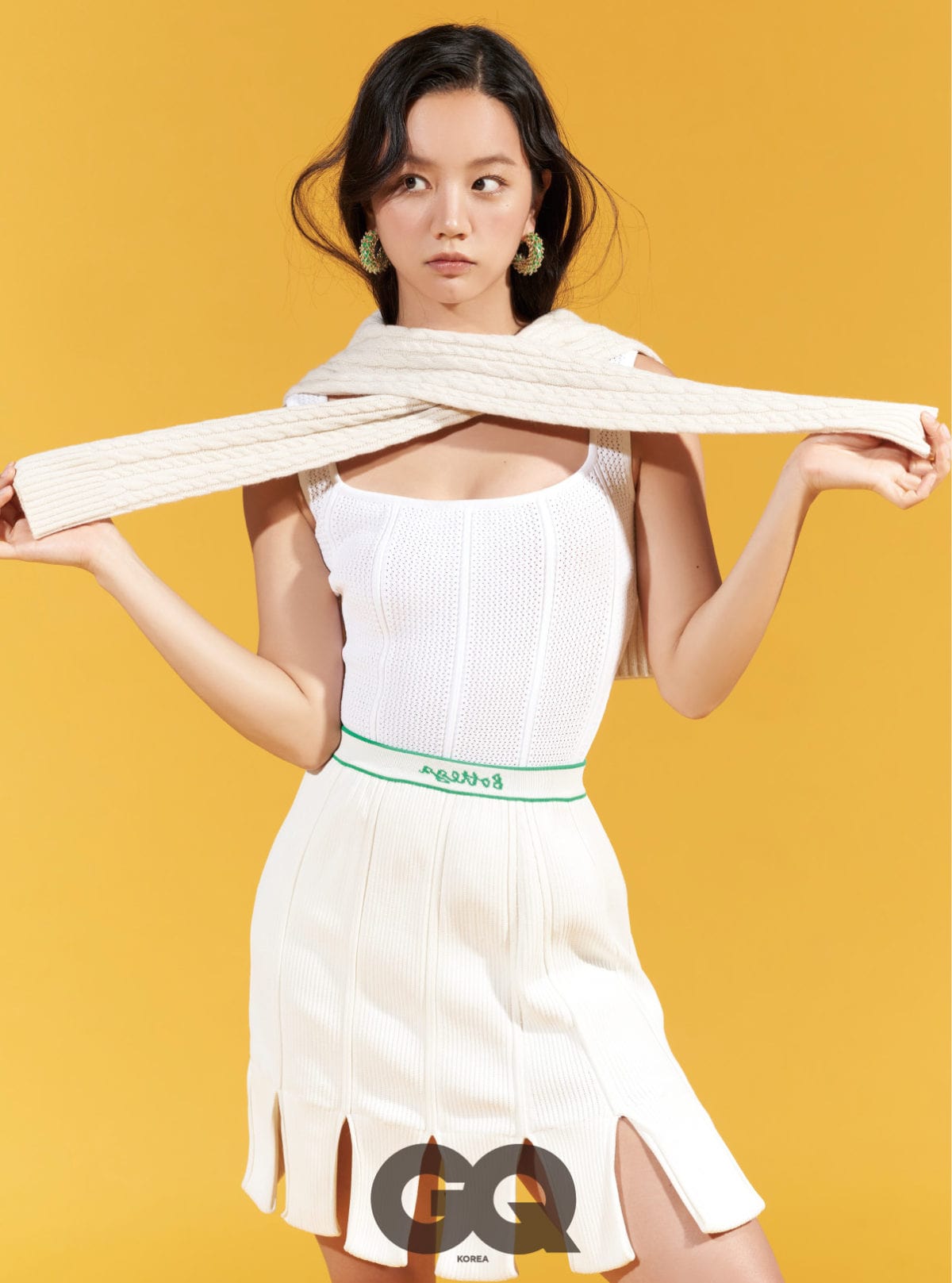 Hyeri revealed that she often looks at comments online. When asked if they left a negative impact on her, she answered, “Actually, there’s more good comments than bad ones, so it’s alright. When I see something absurd I just say to myself, ‘This person must really not like me,’ and move on. But sometimes, there are comments that I get hung up on. That’s when I take a look at my issues. I accept that as one facet of my work.”

On the other hand, when anyone Hyeri knows becomes the target of negative comments, she tells them, “Listen to the people you love most and the people who love you most.”

Hyeri wrapped up the interview with a display of her resolve. “While I’m acting, it’s impossible to be sincere all the time. That’s why I’m always working on my mentality. We’re always real, and that reflects on-screen.” She concluded, “If I’m happy, I simply believe that everyone will feel that, too.”

Check out Hyeri in her drama “Moonshine” with subtitles below:

GQ
Girl's Day
Hyeri
How does this article make you feel?