VIXX’s Ravi got emotional as he said his goodbyes on the latest episode of “2 Days & 1 Night Season 4.”

Last month, Ravi announced that he would be stepping down from KBS 2TV’s “2 Days & 1 Night” in order to prepare for his upcoming military enlistment. As the May 1 broadcast of the variety program marked his final episode before enlisting, he prepared a handwritten letter to express his gratitude before leaving the show.

Reading his letter aloud on the night of his final trip, Ravi was unable to hold back his tears as he addressed the cast and crew.

“Because I’ve built up so much affection for you all and have so many things I want to say, I’m writing this letter because I feel like if I don’t write this down beforehand, I won’t be able to properly express my feelings,” read Ravi. “To Jung Hoon, Jong Min, Se Yoon, [DinDin], In Woo, Captain Bang and the ‘2 Days & 1 Night’ staff, and the viewers, this is Ravi. I knew this day would come eventually, but time has flown by so quickly, and it’s already my farewell trip.”

“Before ‘2 Days & 1 Night,’ the world was hard for me to bear as I went about living,” he continued. “I hadn’t gotten to know the world that well, so there were many places I hadn’t visited and many types of food I hadn’t tried eating. Because of my depression, there were many days when I couldn’t even breathe comfortably.” 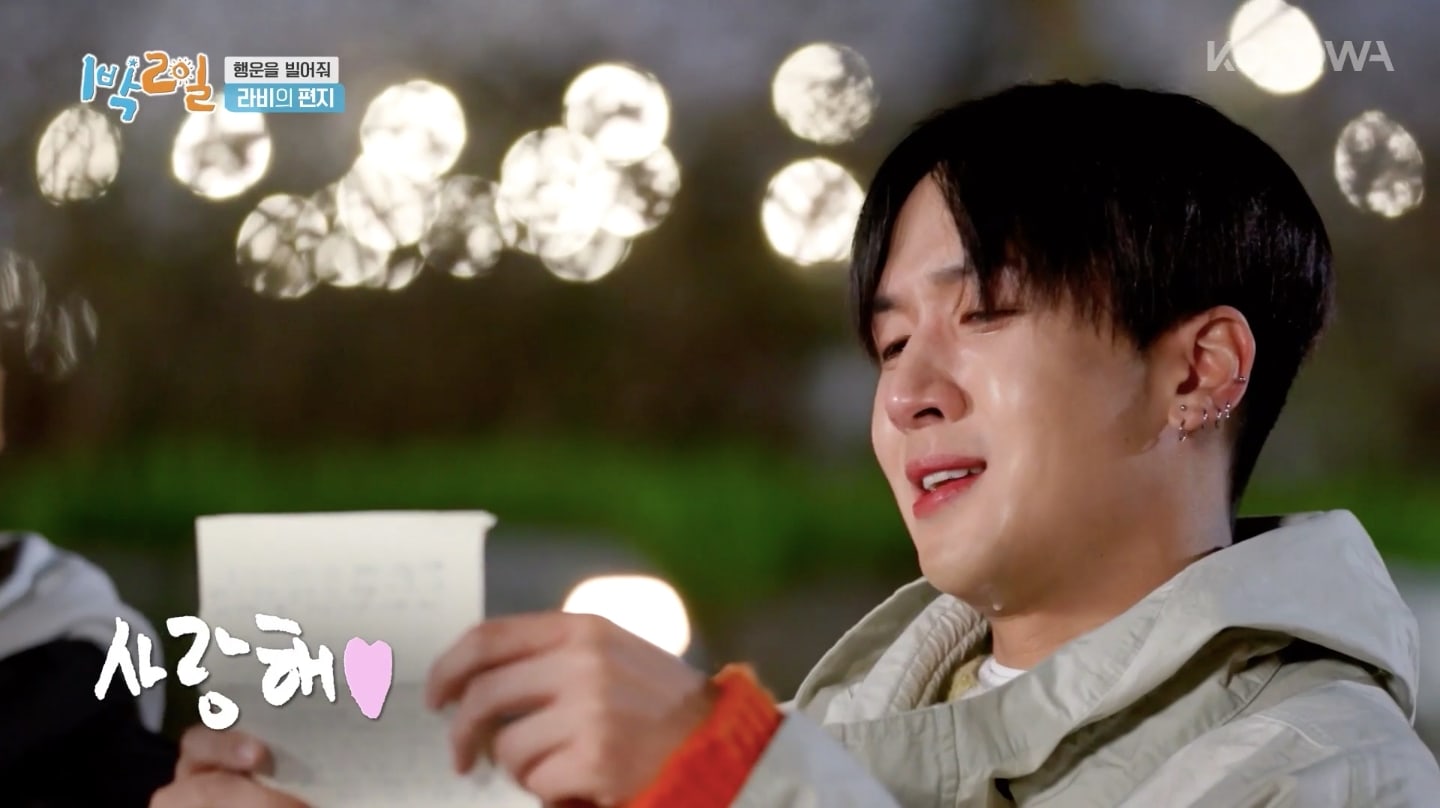 “But thanks to ‘2 Days & 1 Night,’ I think I was really able to change a lot,” said Ravi. “From three years ago, when I started out as the youngest member [of the cast], up until the time when I got to meet In Woo, I think I found the only place in my life where I could be comfortably spoiled [as the youngest] and lean on others, and I think I felt more relaxed and at home during my time here than anywhere else. It’s to the extent where I wonder if there’ll ever be another time when I’m able to childishly joke around and laugh comfortably while acting stupid like I did here. That’s how special this show is to me.”

“I was sincerely thankful to you for teaching and taking care of me for the past three years,” he continued. “I will miss you a lot. I was happy to have been able to be your ‘Crazy Ravi.’ I love you. I really love you a lot.” 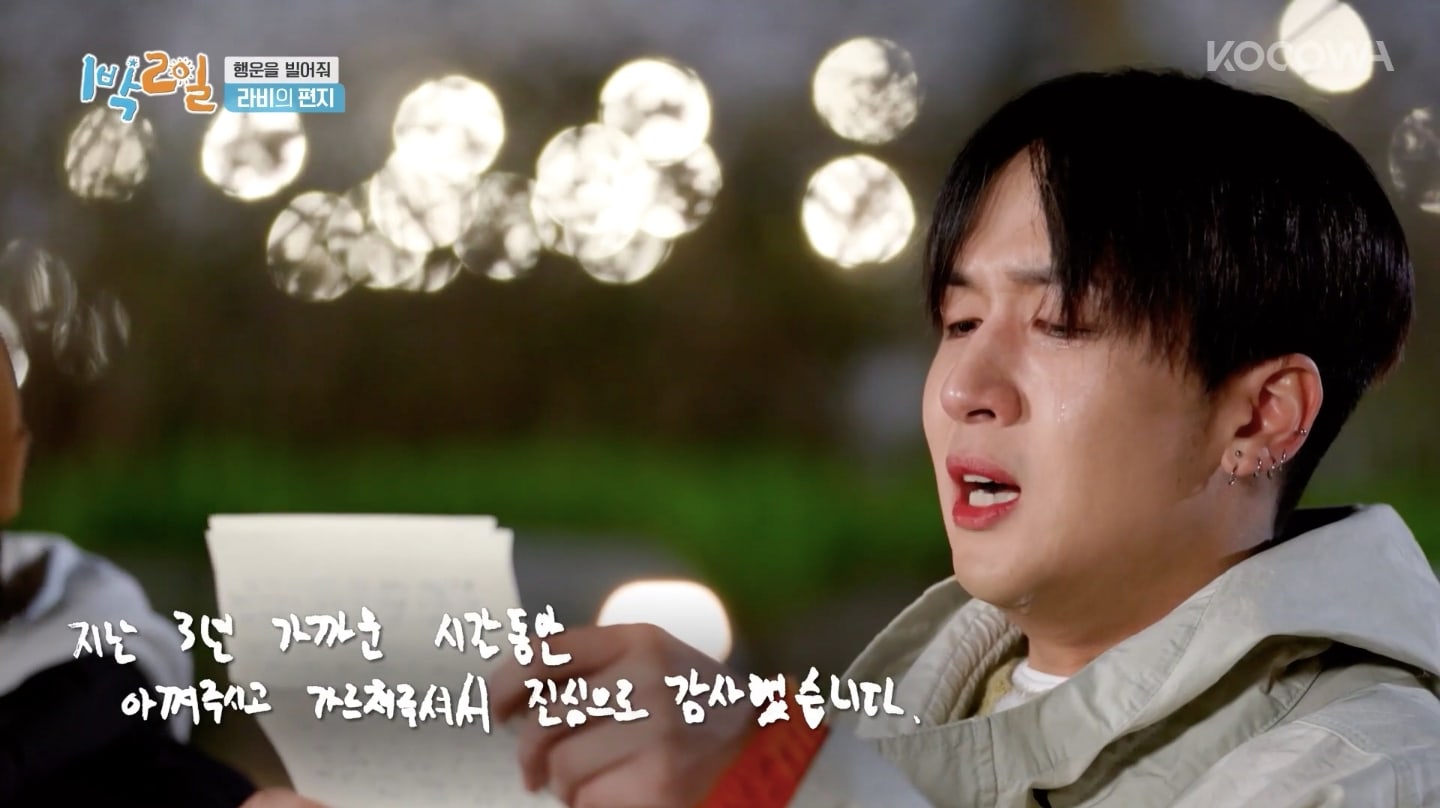 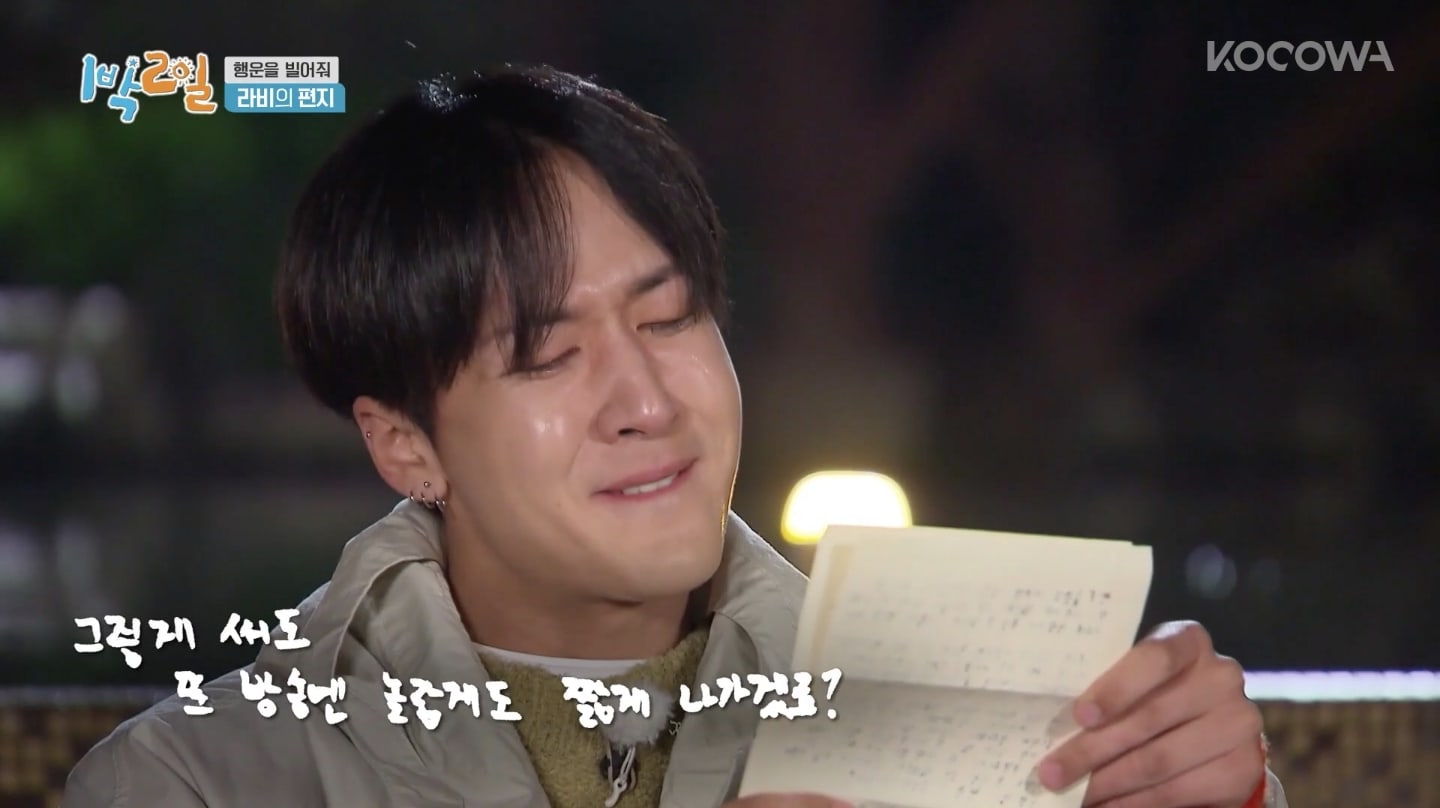 All of the other cast members cried along with Ravi as he read his letter, and afterwards, Moon Se Yoon remarked, “We’ll see each other again soon… I don’t know why we’re crying.” Wiping away his own tears, DinDin responded, “That’s why it’s funny. Just because Ravi is leaving doesn’t mean that we’re not going to see Ravi outside of the show. But the fact that we won’t be able to have fun together here [on the show] is so sad to me. [Ravi] is such a kind guy.”

Kim Jong Min, who left an earlier season of “2 Days & 1 Night” due to his own military service but eventually returned to the show, commented encouragingly, “I went to the [military] and came back while I was doing ‘2 Days & 1 Night,’ but Ravi did a lot better than me before I left. I just left, without doing anything like this.” After everyone cracked up, he went on, “It’s my wish that after Ravi diligently completes his service and comes back in good health, we can keep doing the show together.”

Yeon Jung Hoon chimed in, “It’s not like this farewell is forever. And Ravi will do well wherever he goes.” Na In Woo, who only joined the show relatively recently, noted regretfully that he had just started getting close to Ravi and was sad that he had to go so soon.

The next day, the cast wrapped up their final trip by going to a studio to take some fun family photos together before Ravi’s departure. At the very end, Ravi turned to the camera and said, “Viewers, I was really happy because you looked kindly on me and gave me lots of love over the past three years. I hope you will continue to give lots of love to ‘2 Days & 1 Night’ and Ravi in the future as well. I’ll be sure to greet you again no matter what.” 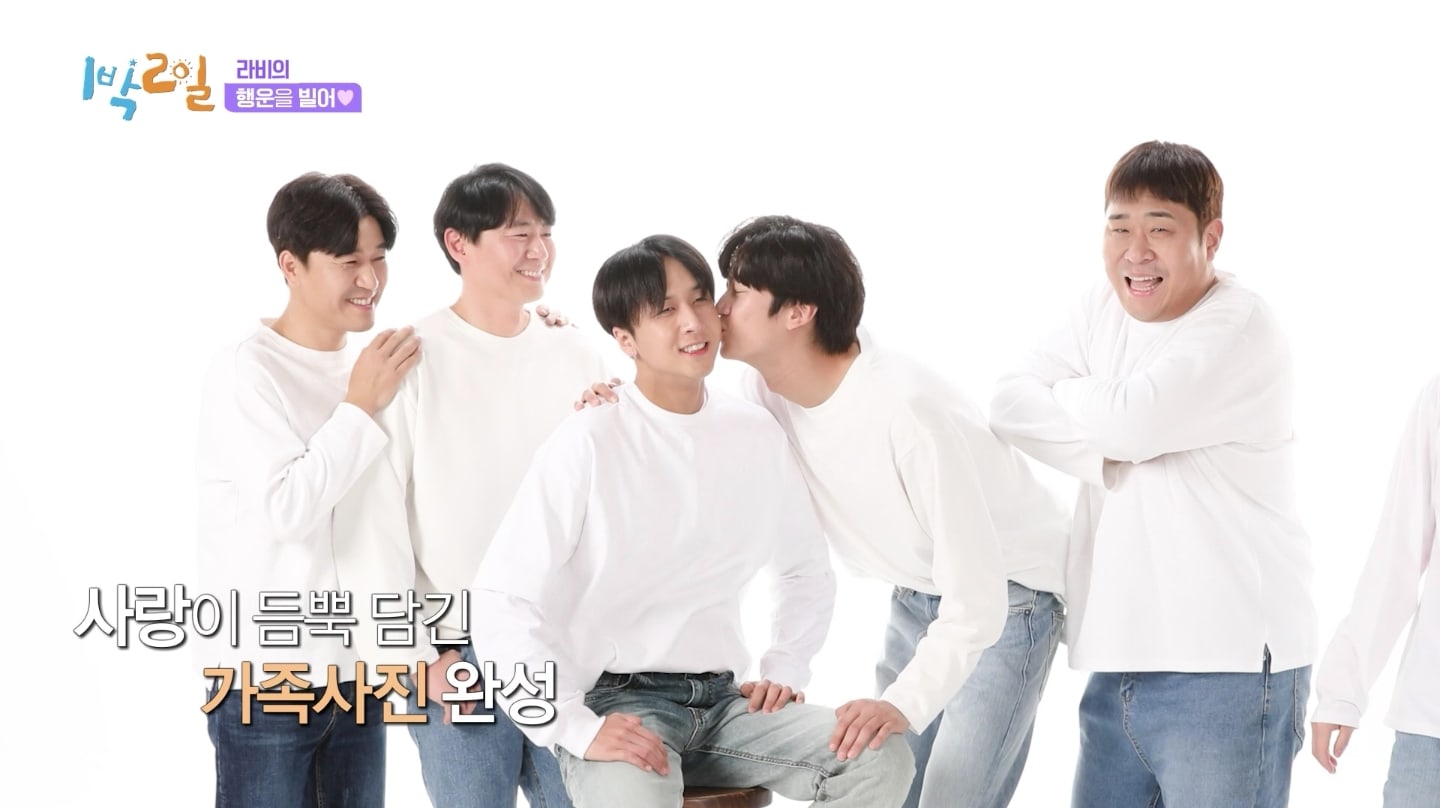 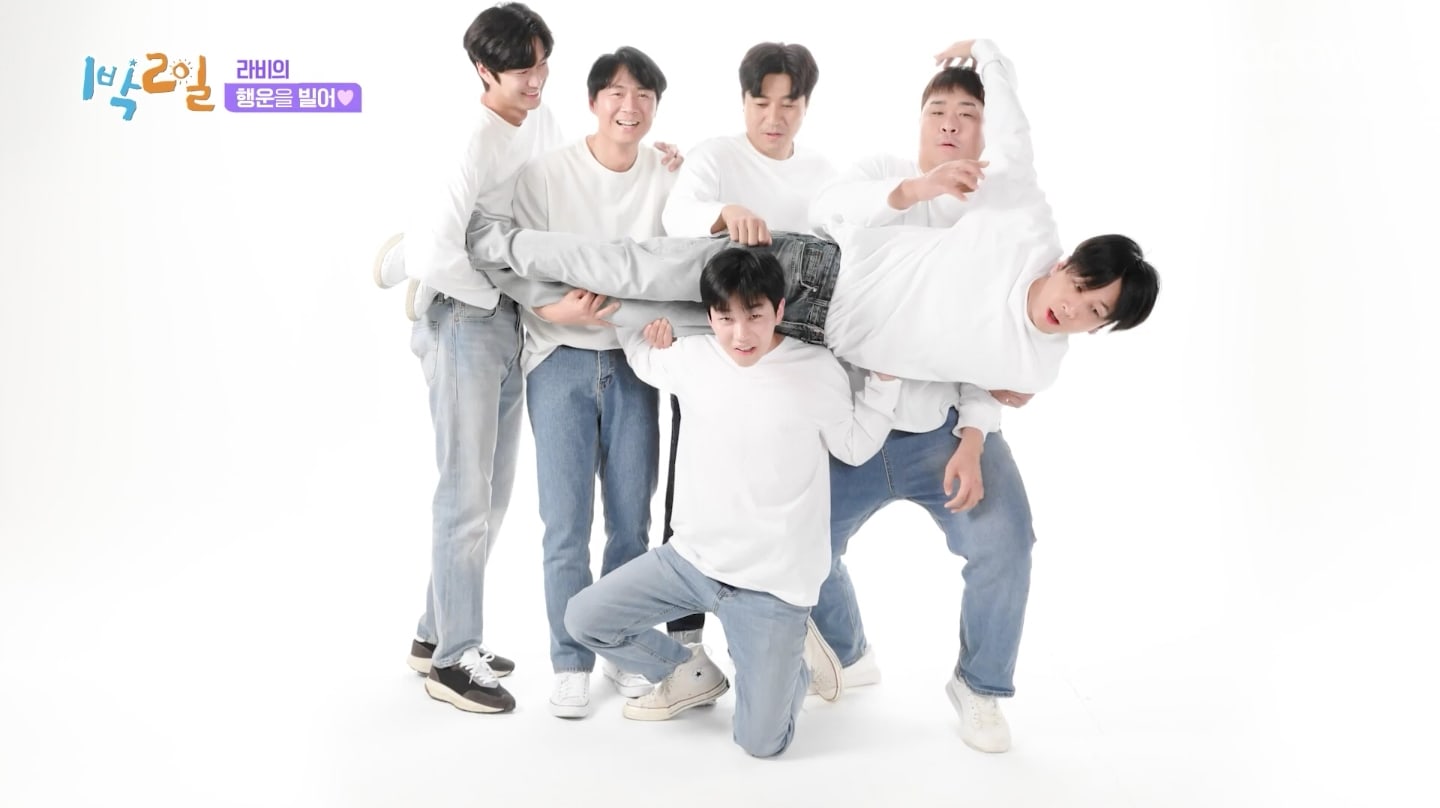