Former AB6IX member Lim Young Min has written another letter of apology over his DUI controversy back in 2020.

Lim Young Min was caught driving under the influence back in May 2020, and he went on hiatus before officially leaving AB6IX on June 8. Following his departure from the group, his agency Brand New Music confirmed in November 2020 that he has enlisted in the military.

On May 2, Lim Young Min was discharged from the military, and the next day, he released the following handwritten letter via Brand New Music’s social media account.

Read the full letter below:

Hello, this is Lim Young Min.

A year and a half went by neither slow nor fast, and I was discharged from the military on May 2, 2022.

I’d like to thank those who waited for me and supported me so that I can endure well in the military.

While serving in the military, I met good seniors, colleagues, juniors, executives, and people. It was a valuable time where I got a lot of help and was able to learn a lot.

I spent a lot of time looking back on myself during my military service.

I had many realizations while thinking about how I was flawed and how much damage and hurt my wrongdoings have caused.

Once again, I sincerely apologize to the people who suffered and got hurt because of me.

And I’m sorry and grateful to those who waited for me.

From now on, I will carefully think before acting.

I will work hard to become a better person day by day and greet you with a better side of me. 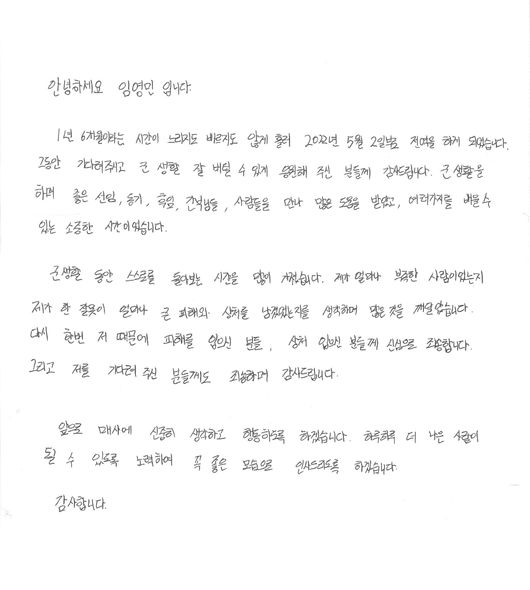 Lim Young Min
How does this article make you feel?