Son Dam Bi and Lee Kyou Hyuk shared their full love story during their first appearance on “Same Bed, Different Dreams 2 – You Are My Destiny”!

On the May 9 broadcast of SBS’s “Same Bed, Different Dreams 2 – You Are My Destiny,” engaged couple Son Dam Bi and Lee Kyou Hyuk made their first appearance.

During the broadcast, the pair talked about the public’s reaction to news of their marriage and the assumptions that it was a shotgun wedding. Son Dam Bi commented, “It wasn’t pre-marital pregnancy. We laughed it off.”

Son Dam Bi and Lee Kyou Hyuk first met in 2011 on SBS’s figure skating program “Kiss and Cry.” At the time, they shared that they didn’t think much of each other.

Lee Kyou Hyuk elaborated, “When I first saw her in an informal setting, she didn’t seem like a celebrity. She was a friend I was comfortable with and that aspect struck a chord. Our conversations flowed well.” Son Dam Bi added, “I was drawn to Lee Kyou Hyuk’s charisma. He speaks in a fun way. He was popular during ‘Kiss and Cry.'”

The two then shocked the studio as they revealed, “10 years ago, we dated for over a year while doing ‘Kiss and Cry.'” They continued, “Back then, we also couldn’t live without each other.” The couple shared that they exchanged phone numbers during the show and naturally evolved into a romantic couple. Son Dam Bi described their relationship saying, “For a year, we had a fiery, spectacle-like love.” 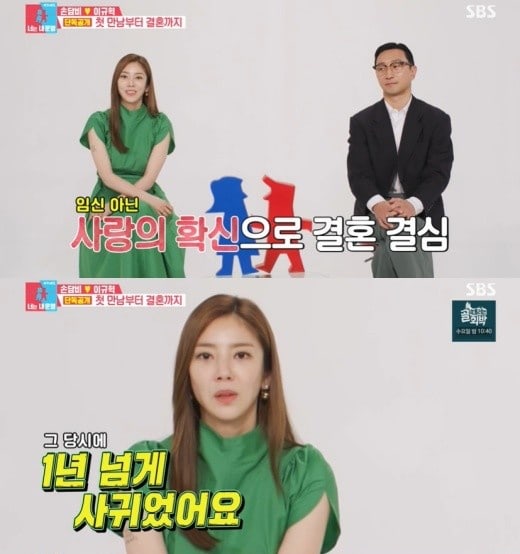 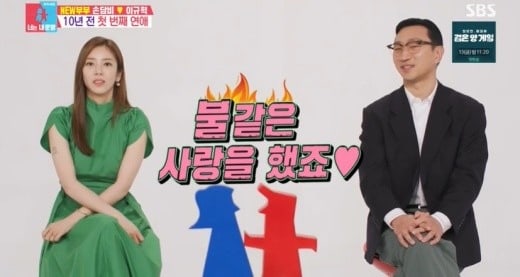 Naming distance as the reason for their break up, the couple shared that when Lee Kyou Hyuk would leave for training, Son Dam Bi would inevitably miss him and whine for him to return. Lee Kyou Hyuk shared, “That felt like she didn’t respect my skating, which is important to me. Now that I think about it, it really wasn’t a big deal, but it made me mad.” Son Dam Bi chimed in, “The only reason we fought was because we weren’t together. Although it was so sad, we eventually put our feelings aside and broke up.” 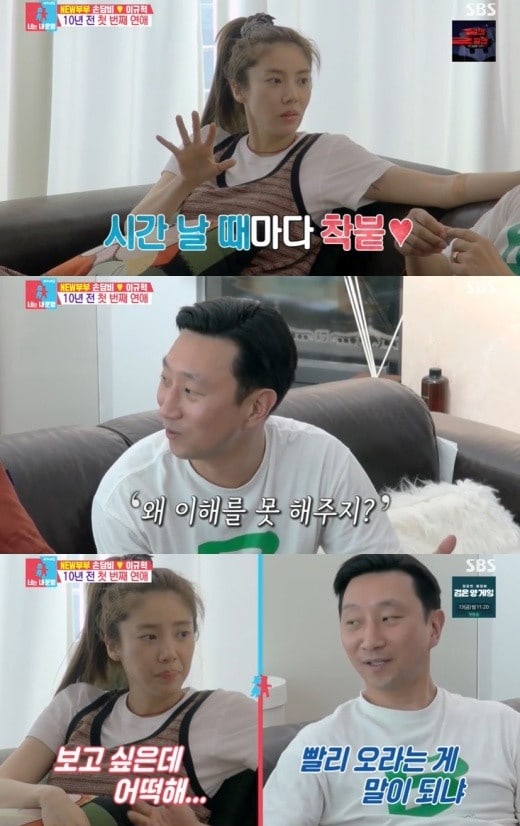 However, the pair fatefully reunited after 10 years. Son Dam Bi revealed, “As I was going through something tough, it was a time when I had lost a lot of weight and was only drinking alcohol for three months. An acquaintance of mine said we should go to your restaurant. I thought it’d be awkward but it wasn’t at all. Because of your words, some of my hardships felt resolved at a certain point and I found myself smiling while talking to you.”

Lee Kyou Hyuk responded, “At the time, I had heard that you were feeling depressed. Since we had a relationship in the past, if we ever met again, I wanted to support you and help you have less of a hard time. Although you came by chance that day, I wanted to tell you that it was okay.”

Looking back on the day of their reunion, the couple recalled chatting until 6 a.m., which signalled the start of their rekindled romance. Lee Kyou Hyuk commented, “That day changed our fate.” 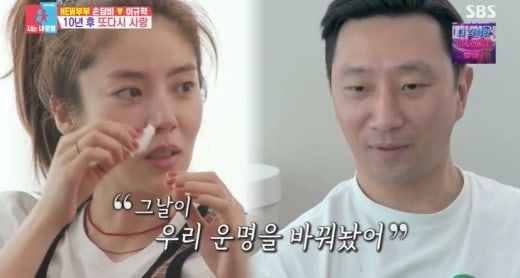 In December 2021, it was confirmed that Son Dam Bi was dating former speed skater Lee Kyou Hyuk. The following month, Son Dam Bi shared a handwritten letter where she announced that they were getting married. The couple will officially tie the knot this week on May 13.

Son Dam Bi
Same Bed Different Dreams 2 – You Are My Destiny
Lee Kyou Hyuk
How does this article make you feel?