The stars of “Woori the Virgin” have taken time for a special interview with Soompi!

A remake of the hit American show “Jane the Virgin” (which was itself based on a Venezuelan telenovela), “Woori the Virgin” tells the story of a woman named Oh Woo Ri (Im Soo Hyang) who has been strictly maintaining her chastity before marriage but winds up pregnant after an accidental artificial insemination during a medical exam. Sung Hoon plays Raphael, the CEO of a large company and the biological father of Woo Ri’s child, while Shin Dong Wook is Lee Kang Jae, Oh Woo Ri’s loyal boyfriend.

Check out our exclusive interview with the actors including some questions submitted by fans via Soompi’s Twitter and Instagram! 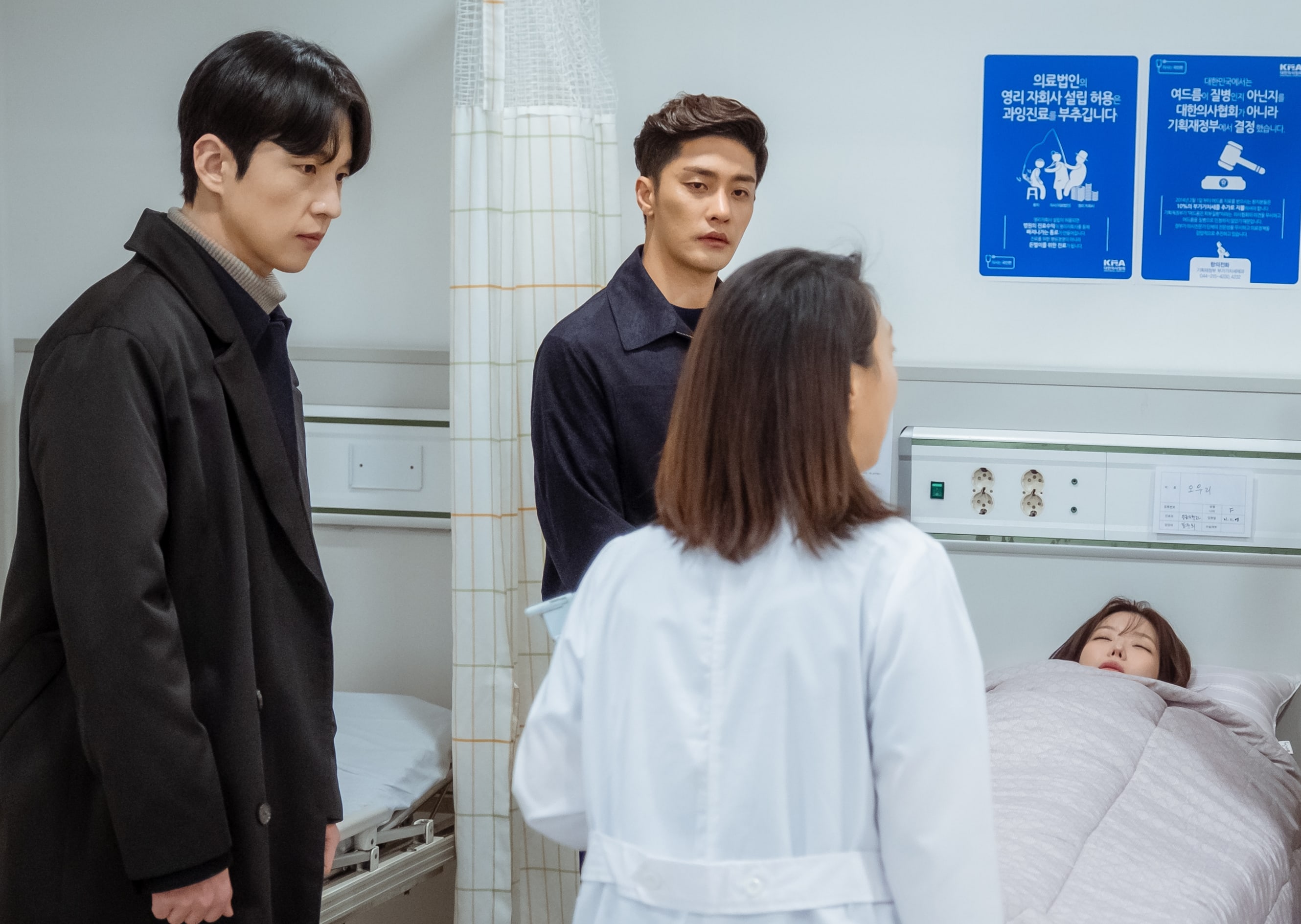 Did you watch the original series “Jane the Virgin”? How was it?
Asked by @baebuchu

Im Soo Hyang: I watched the original drama immediately after I decided to star in “Woori the Virgin.” It was a charming drama I couldn’t stop watching after turning it on. I remember continuously watching it nonstop.

Sung Hoon: I didn’t watch the original drama, but I did see the plot and summary. Seeing that, I wondered if this drama would fit Korean sentiments, and it was a project I was very curious about. Since I’ve wrapped up filming for the drama, I’m planning on watching the original drama.

What made you accept the offer to star in this drama?
Asked by @123_amritha

Im Soo Hyang: When I first read the script, I felt, “This is the drama!” That’s why I immediately decided on starring in the drama without any hesitation. “Woori the Virgin” has an interesting story, but the drama felt charming also because the project captures various messages about love and family.

Sung Hoon: Director Jung Jung Hwa, who is simultaneously in charge of directing and writing the script, was a big factor. I also worked with the director once before in the drama “The Sound of Your Heart Reboot 2,” and the pleasant memories from that time made me choose this project without hesitation.

Shin Dong Wook: The script was really fun to read. It was the most fun out of the ones I read recently. I didn’t feel the time pass at all when reading it! However, the message that the writer wanted to present to society was also clear, so I immediately called my agency. [I called and said], “I’m certain someone wrote this after taking drugs! Just who wrote it? What? The director wrote it? Okay, what I just said is a secret!”

Sung Hoon: Every time we met, the time in between wasn’t that short, so the feeling of meeting again for the first time in a while is that I felt that we had also aged while sensing the change in topics we discussed with each other. Since we are very familiar with each other’s acting style, we were able to create great synergy right away at the first filming session. 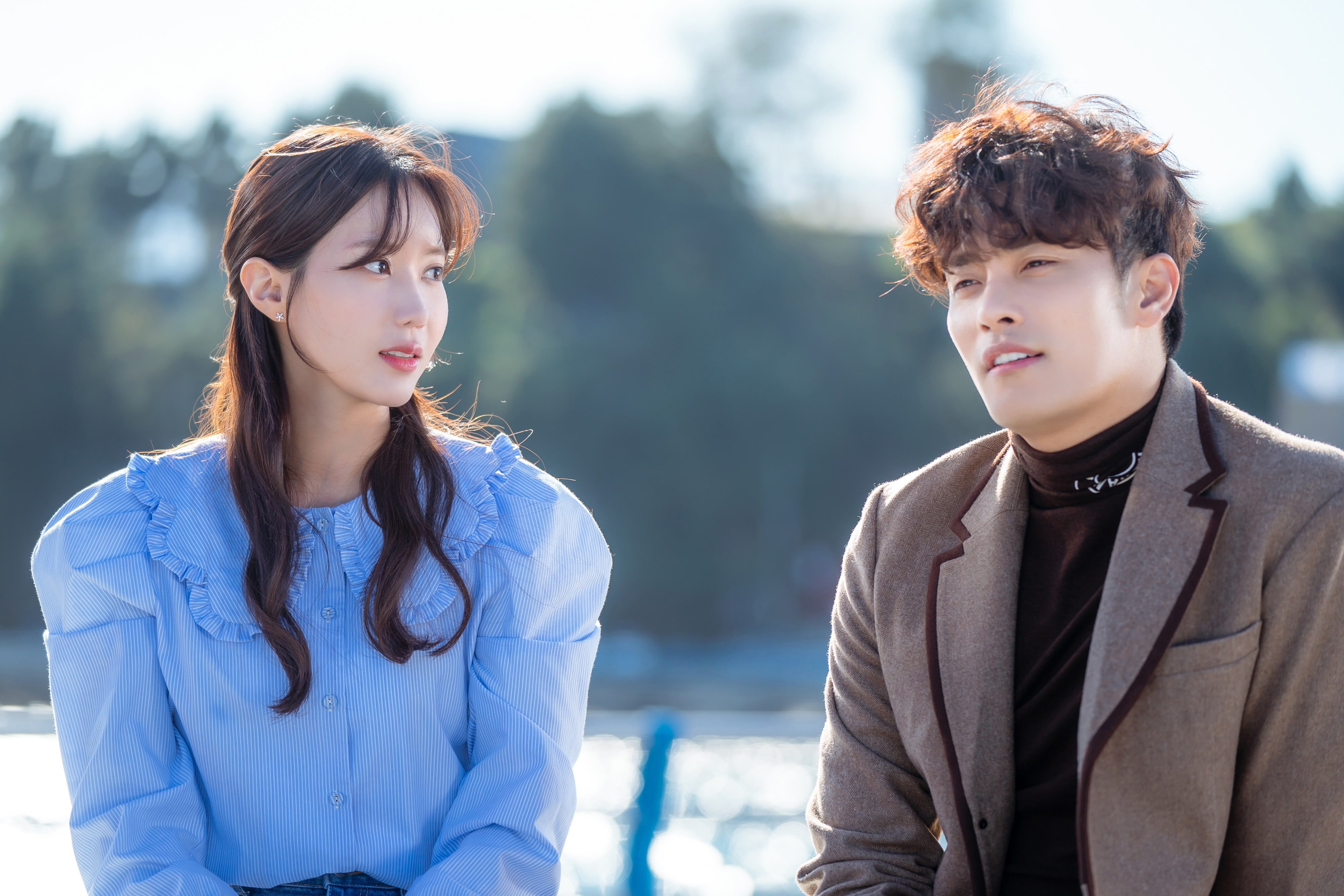 What do you think is the most memorable and fun part about “Woori the Virgin”?
Asked by @asma._.5417

Im Soo Hyang: [“Woori the Virgin”] is a drama that mixes the realistic story of Woo Ri’s family with the fantasy elements of Raphael’s family well. The chemistry shown when the two characters’ families meet is really interesting. I think that the story of the three generations of women in Woo Ri’s family cherishing and caring for one another can also convey the meaning of family.

Sung Hoon: I think a fun aspect is that viewers can watch while comparing the different charms of each of the two men in the love triangle. Furthermore, each character gets swept up in tumultuous incidents. It will be fun if viewers watch on to see how the characters in the story mature in the processes of resolving these incidents.

Shin Dong Wook: We didn’t know what genre the viewers would like, so we added all the elements that viewers might like: romance, comedy, crime, family, makjang…Don’t worry about what to watch, and don’t be riddled with indecision during a tiring night! You can just watch “Woori the Virgin,” which is a buffet of genres!

How much could you relate to your characters?
Asked by @aceandersson

Im Soo Hyang: In the story, Woo Ri is a character who loves her work and wants to do a good job at it. I also really love my work and always think about wanting to do a good job at acting. Furthermore, that aspect takes up a big part of my life, so I think that aspect is similar to Woo Ri. Also, Woo Ri received abundant love from her family while living with her grandmother and mother, and I also grew up while receiving a lot of love from my family. I think the way I confide in my mother and grandmother about my worries is also similar [to Woo Ri].

Sung Hoon: Since I think of him as basically a fictional character, there aren’t many aspects that I relate to. In particular, [Raphael’s] attachment and depth of his feelings for the baby are extraordinary. If I think that such a character really exists, I think many aspects would have occurred differently [in real life] than in the drama.

Shin Dong Wook: Rather than expressing exactly to what extent I related to the character, I think this [following] expression is correct. I was bored on the days I didn’t have filming, and I wanted to go on set even when my body was tired. Furthermore, when Kang Jae was facing a difficult situation, I lost a lot of weight, and when Kang Jae was happy, filming all night wasn’t tiring. Like how there is a saying that an actor is a slave to their character, I think it might be because it’s fun to feel personalities and behaviors that are different from my original self when filming.

Do you watch your own dramas a lot? What do you focus on when watching?

Sung Hoon: I always watch my dramas to monitor myself. When monitoring, I focus on every aspect from my acting to the overall flow of the drama.

Shin Dong Wook: I don’t watch my dramas a lot, but when it comes to important scenes, I watch closely to check whether I felt my co-star’s words, actions, and emotions and reacted well to that. I feel happy if I reacted well, and I get angry at myself if my reaction was dull. (Don’t ask how I express anger. Humans are all pretty similar haha) 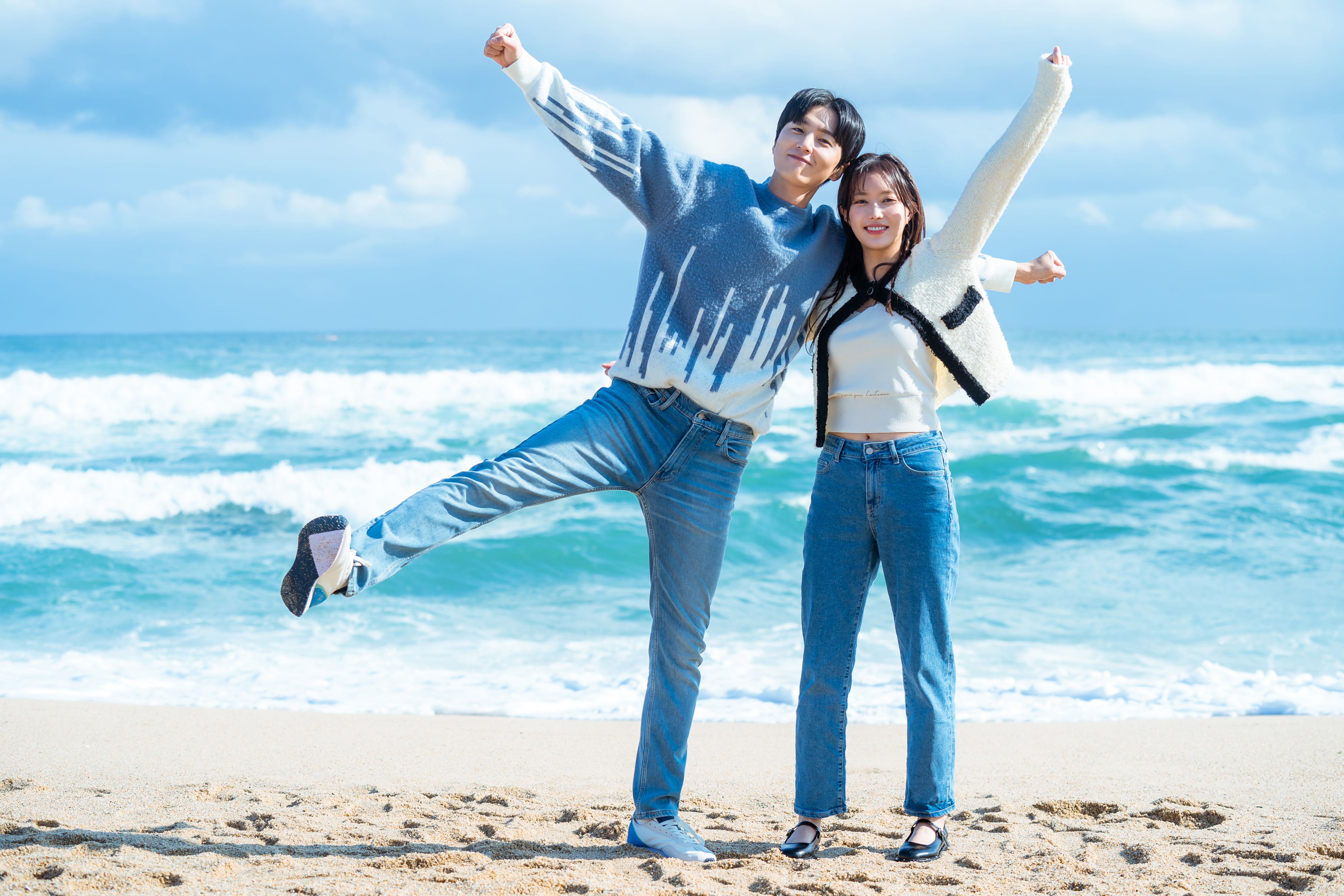 What is a job you haven’t had yet in a drama that you would like to try for your next character?

Sung Hoon: I want to experience a drama character with a more rough vibe now such as a policeman, investigator, or a villainous role.

Shin Dong Wook: I have surprisingly acted out characters with a wide variety of occupations! A lone shark, doctor, fake doctor, physical therapist, lawyer, policeman, investigator, music coordinator, Catholic priest, head of a publishing company, etc…There are different charms for each of the occupations, so I really want to try playing characters with diverse jobs. The process of learning about a new occupation is always fun.

How do you relax when you aren’t working?
Asked by @joceyn016_josiemacgillycuddy

Sung Hoon: I usually play games at home or go work out. Besides those times, I think I spend almost all my time with [my pet] Yanghee who I am not able to play with often when filming.

What is a drama you enjoyed watching recently?

Sung Hoon: I tend to watch American dramas and movies in depth more. Every time I watch, I binge-watch a lot at once at home, so it’s difficult to mention just one^^ These days, I have been tuning into “Woori the Virgin”!

Shin Dong Wook: “The Mandalorian”!! The original vibe of “Star Wars” has returned. The main character’s face isn’t visible because he always wears a helmet, but I can feel all the subtle emotions. If you’re a “Star Wars” fan, I really recommend it!

What is your go-to midnight snack?
Asked by @bread_san._.17

Sung Hoon: I like pizza and kimchi jjim (braised kimchi) that I can’t eat when I’m filming or actively promoting. Food with flour and strong flavors really taste the best at night.

What is a song you enjoy listening to these days?

Sung Hoon: There isn’t a particular song I enjoy listening to these days, and I think I tend to listen to songs that suit my emotions depending how I feel from time to time.

Shin Dong Wook: Queen’s “Love Of My Life” is my own theme song for Kang Jae.

Im Soo Hyang: This is Im Soo Hyang who has come to greet viewers through the role of Oh Woo Ri. “Woori the Virgin” is a drama that delivers meaningful messages about love, family, and more as a variety of commotions unfold. It’s a drama with both entertaining and touching [moments], so please show lots of love.

Sung Hoon: COVID-19 is nearly coming to an end, and more and more nations are increasingly declaring a return to normal life with COVID-19. I think the days in which we can meet in person are not far off. Please stay healthy. Please also show lots of interest and love for “Woori the Virgin”!

Shin Dong Wook: Doesn’t it feel heart-fluttering right before going on a blind date? I feel exactly like that right now! I’m really excited at the thought that new viewers will love our drama. There will be viewers who will be meeting me for the first time, and there will also be viewers who have met me through another drama, but I’m certain of this one thing! “After seeing this project, starting today, we are Team Kang Jae!” Please show lots of love for our drama. 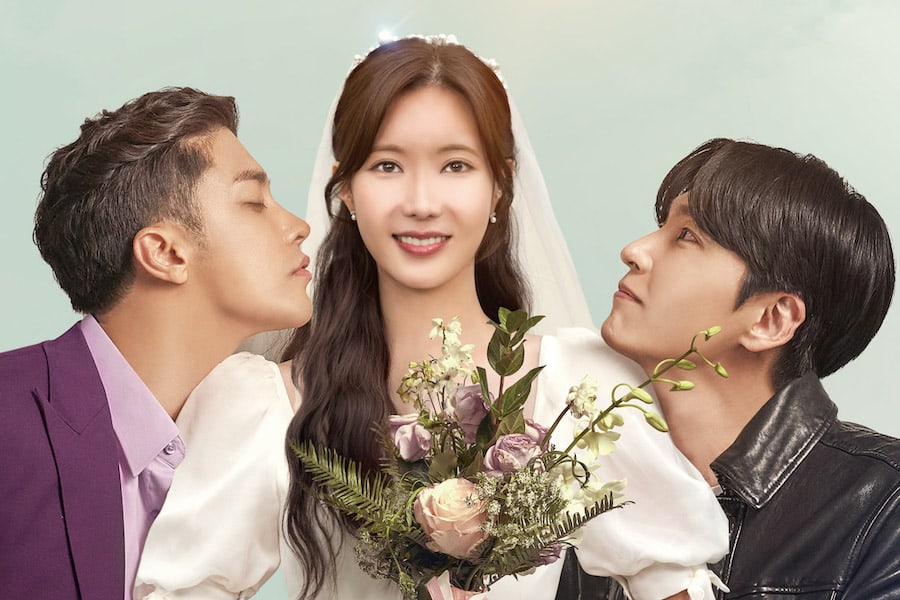 Begin watching “Woori the Virgin” below: