The director and the writer of “Extraordinary Attorney Woo” shared their thoughts on various topics relating to the drama!

On July 26, a press conference for “Extraordinary Attorney Woo” was held in Seoul. Director Yoo In Sik and writer Moon Ji Won attended and shared their thoughts regarding the popularity of the drama as well as behind-the-scenes stories regarding the process of writing and producing the drama.

When asked if he anticipated the popularity of the drama, director Yoo In Sik answered, “I didn’t expect the drama to be loved this much. The drama started from a channel that is not very known, and I wasn’t sure if the topic [of a lawyer on the autism spectrum] would be appealing to the public. If compared to food, the drama is like mild-tasting pyongyang naengmyeon, so I thought it would be great if people who are fond of such topics would watch this drama. But I never imagined people to give such fervent support from the beginning.” 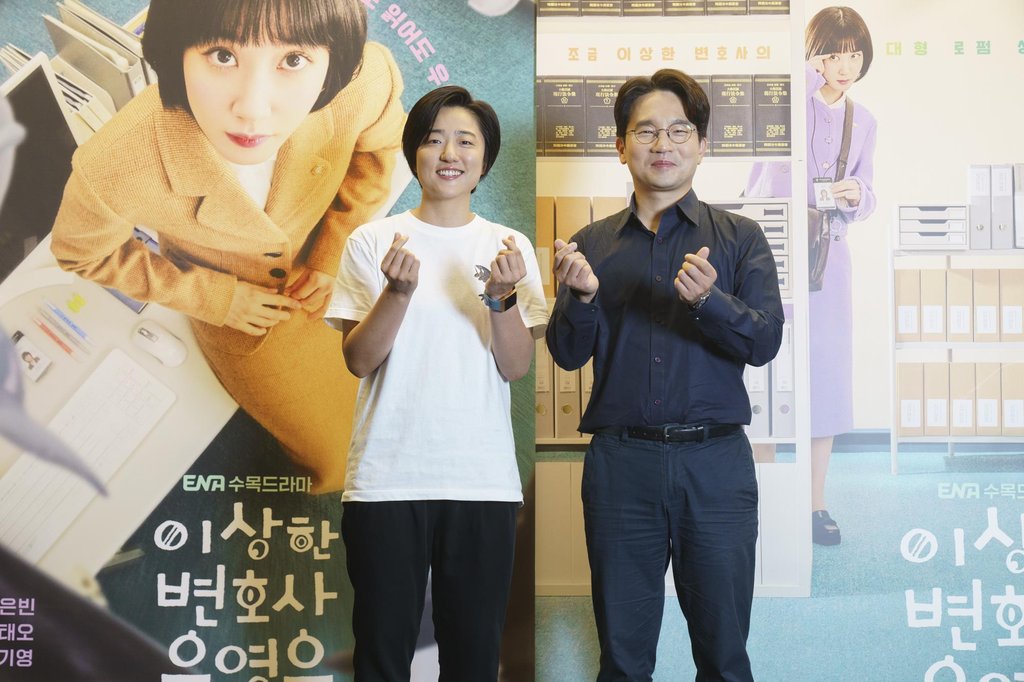 In the scene where Woo Young Woo and Tae Soo Mi (Jin Kyung) reconnect, the storyline did not use cliché stereotypes. When asked what point she focused on when writing, Moon Ji Won commented, “When I told the production company that I was going to slip in the element of ‘secret birth’ in the storyline, there were concerns whether it would be okay to bring in such a cliché element when I had to write a fresh and novel drama. I think this element didn’t feel like a cliché to me because I’ve been only writing films, and I was not used to the rules for writing dramas. I tried to tell the story by focusing on the relationship between the two characters without thinking about the rules for writing, so I am just grateful for the positive response.”

When asked if there is a message that she wanted to convey through the character Kwon Min Woo (Joo Jong Hyuk), Moon Ji Won replied, “I thought a lot about how the surrounding people would feel if a figure like Woo Young Woo appears at a large law firm. Woo Young Woo is clearly a member of the socially underprivileged who needs care and compassion, but at the same time, she is the strong person who you can’t surpass even when you’ve tried your best. I thought that there will be people who think like Choi Su Yeon (Ha Yun Kyung) and there will be people like Kwon Min Woo who think it is reverse discrimination, so I tried to show as many plausible stances as possible.”

She continued, “It’s inevitable that my opinions get reflected in the story, but I think if a creator tries to convey a certain message through his or her work, the viewers catch that quickly and get bored. That is why I’m more cautious not to directly convey a message. I didn’t write the lines to say, ‘Let’s be like Choi Su Yeon,’ or, ‘Don’t be like Kwon Min Woo.'” 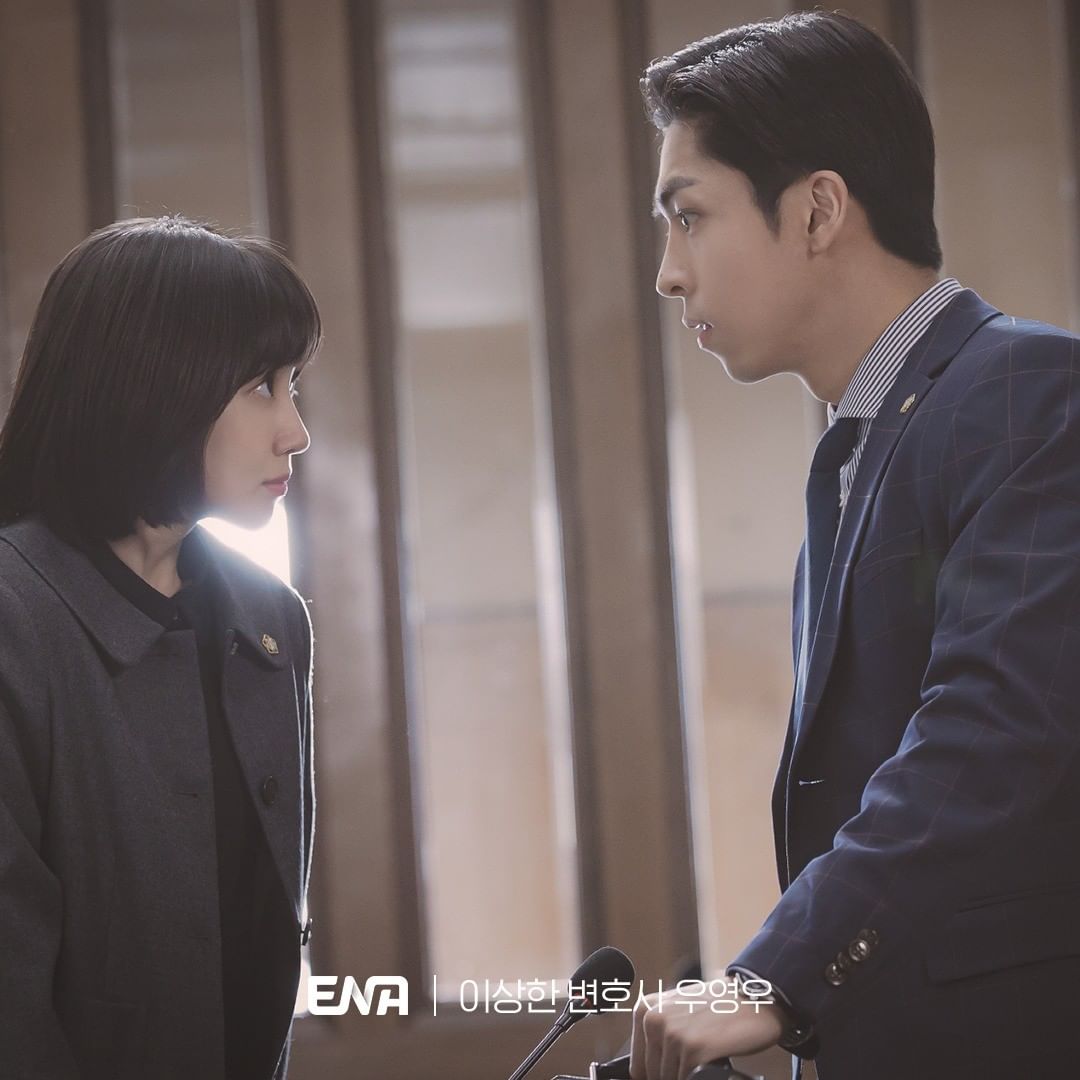 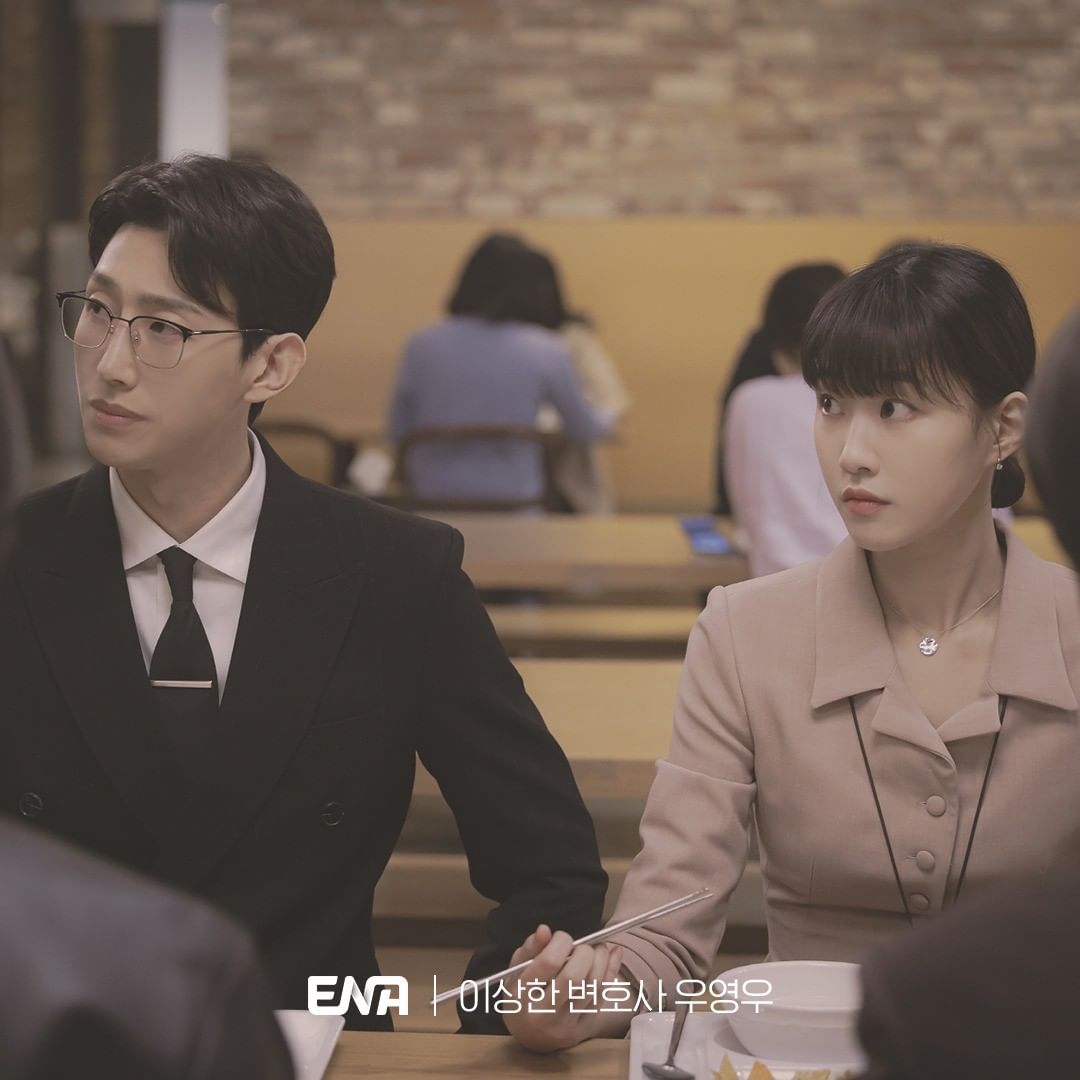 The character Jung Myung Seok (Kang Ki Young) is regarded as a fantasy figure that doesn’t exist in real life. When asked about what kind of things she considered when creating the characters, Moon Ji Won shared, “I put in a lot of charming points that a 40-year-old person can have into Jung Myung Seok. I was worried that viewers may regard not only Jung Myung Seok but also the other people around Woo Young Woo as sidekicks because of the drama title ‘Extraordinary Attorney Woo.’ Although I couldn’t allot many scenes to them, I wanted all of these characters to be seen as unique individuals and shine even with their short screentimes.” 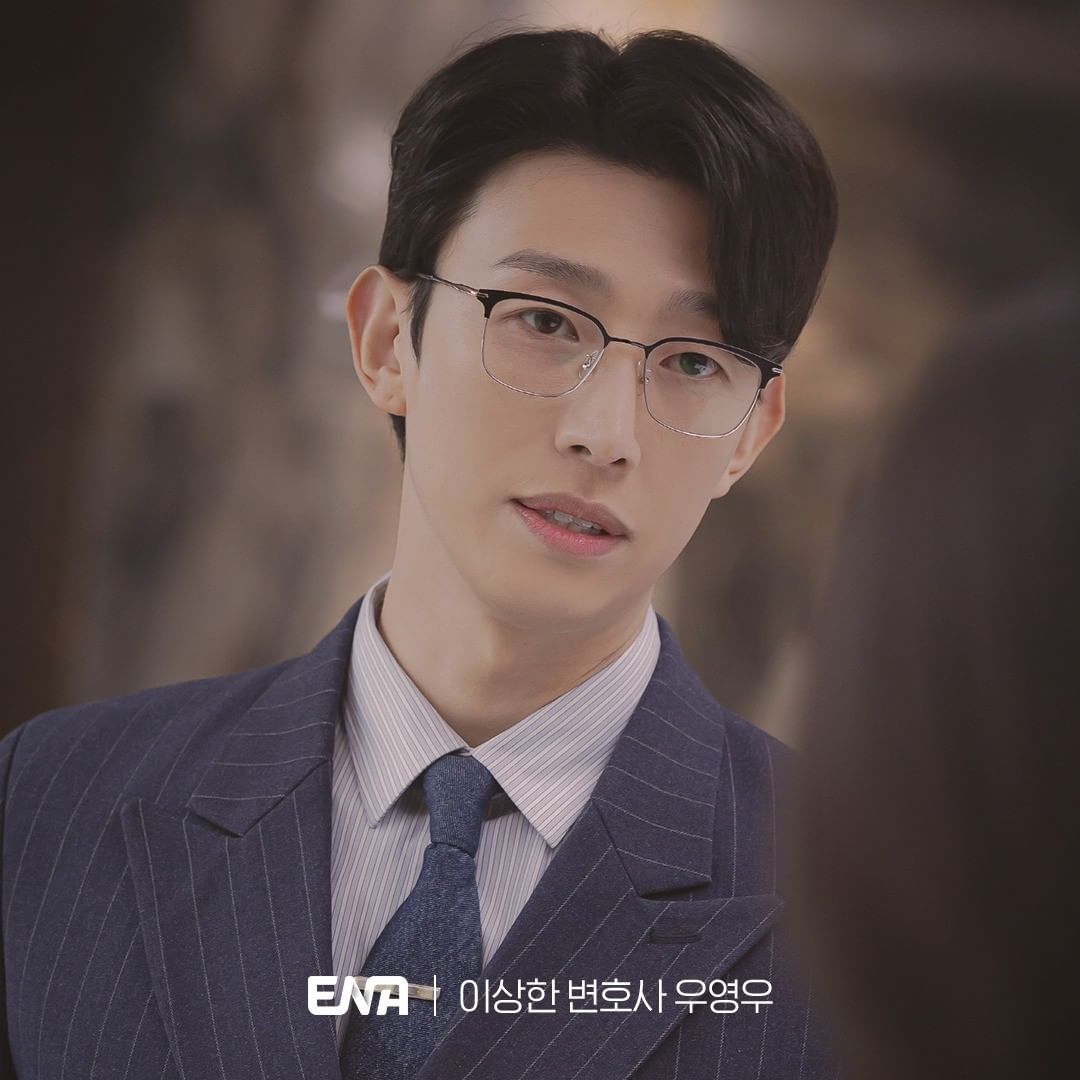 When asked about the reason whales appear in the drama, Moon Ji Won replied, “Director Yoo In Sik joined the team when I wrote up to about eight episodes, and he mentioned that it would be nice to have a device that can be used to visualize Woo Young Woo’s inner thoughts. People who are on the autism spectrum often get deeply immersed in a specific subject and have expert knowledge on it, so I deliberated for a long time over several subjects. The most popular cases are dinosaurs, trains, weather, and cars, but the reason I chose whales over the other subjects is because they look cool. I thought whales would visually enrich the mise-en-scène. After that, I started to research about whales and inserted the ‘whale eureka’ (because whales appear whenever Woo Young Woo finds enlightenment) scenes starting again from the first episode.”

When asked to share some of the points to keep an eye on, Yoo In Sik commented, “If the first half of the drama was focused on whether or not Woo Young Woo could become a true attorney, the second half will be focused on the process of Woo Young Woo becoming an excellent attorney. As a unique figure, Woo Young Woo will find her own way to figure out answers as to what makes a good attorney. It will also be fun to see how the individuals at Hanbada Law Firm mature through the hardships in each of their lives. In addition, please look forward to the passionate performances of surprise [cameos] such as Goo Kyo Hwan.” 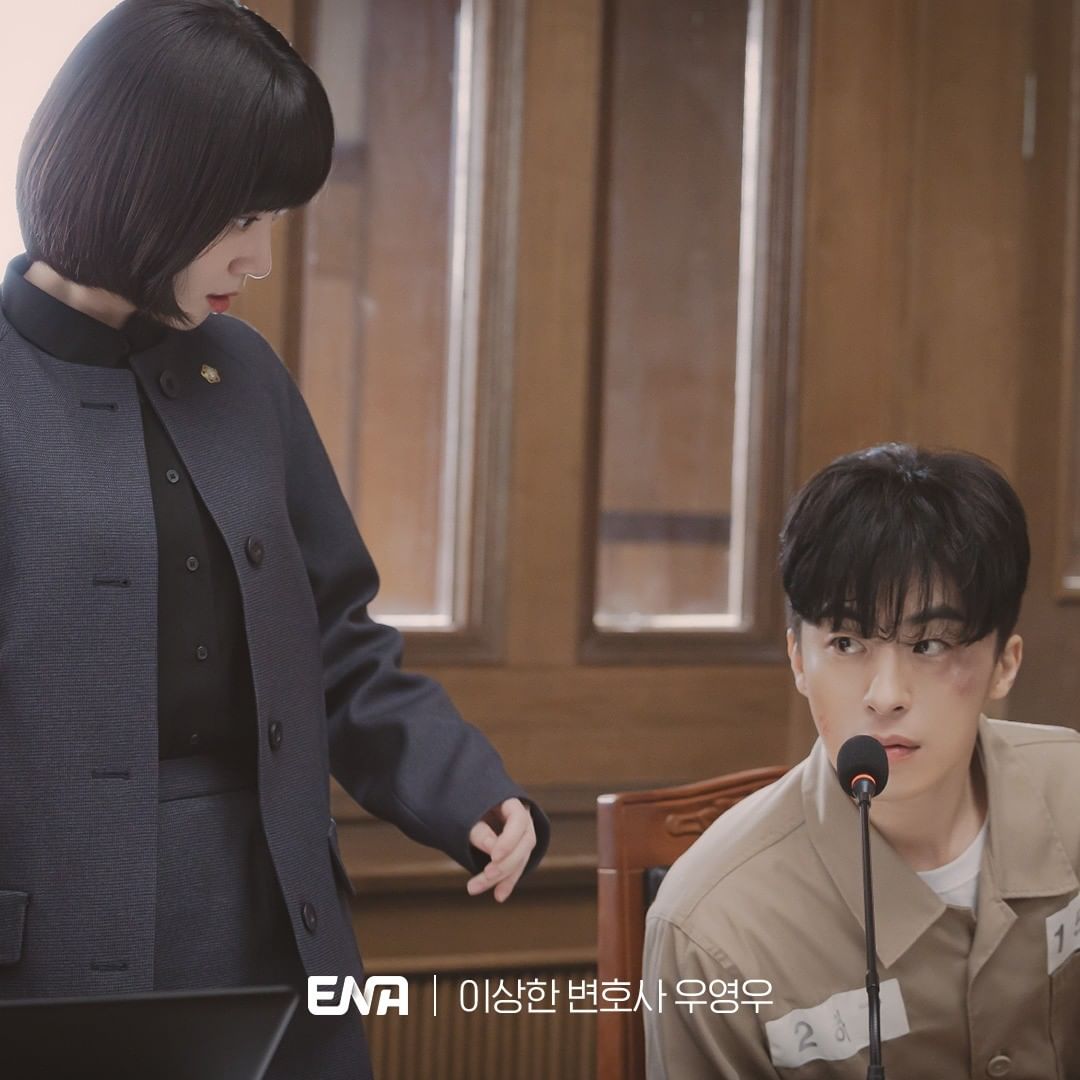 Also watch Park Eun Bin in “Do You Like Brahms?” with subtitles here: