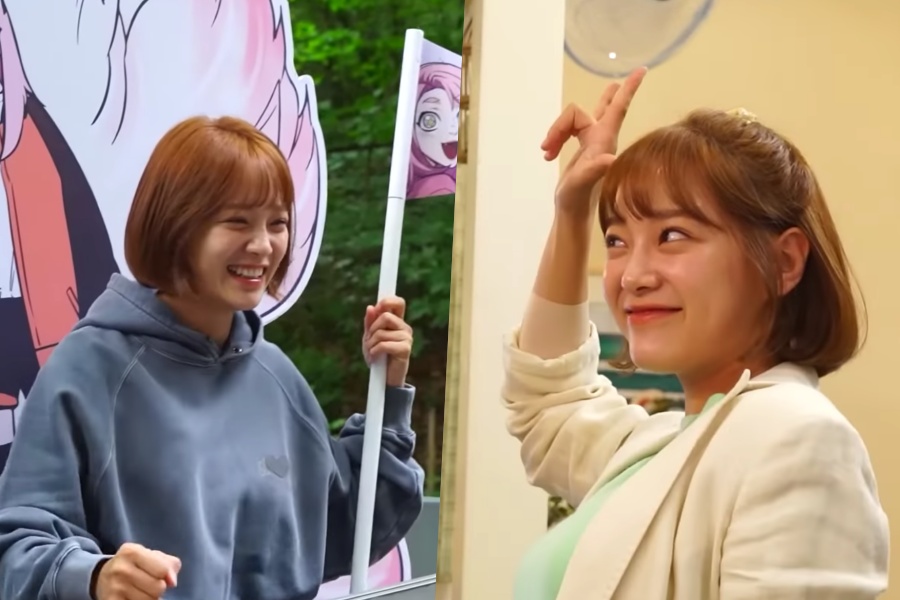 Watch: Kim Sejeong Boosts The Energy On Set Of “Today’s Webtoon” With Her High Spirits

SBS’s “Today’s Webtoon” is a Korean remake of the popular 2016 Japanese series “Sleepeeer Hit!” and is set against the backdrop of South Korea’s competitive webtoon industry. Kim Sejeong stars as On Ma Eum, a former judo athlete who joins a webtoon editorial department as a new employee and struggles to mature into a true editor.

While rehearsing for a scene, Kim Sejeong playfully chats with the camera as she busily runs around searching for Ji Han Seul (Jin Ye Sol).

After, she focuses on her action scenes but looks worried. She shyly comments to the opposite actor, “I weigh quite a bit…” but he tells her it’s okay and the director jokes, “That’s what you were worried about?” Despite her concerns, Kim Sejeong impresses with how quickly she grasps the movement and even jokes about how the stance reminds her of the iconic “Trouble Maker” couple dance by HyunA and Jang Hyunseung.

On a bright day, Kim Sejeong is joined by Im Chul Soo who plays Na Kang Nam, a webtoon writer working with On Ma Eum. While Na Kang Nam runs an intense marathon, On Ma Eum encouragingly supports him on the side and the two actors remain in high spirits all throughout the tiresome scene.

The two then show off their chemistry and the director makes the actors laugh as he jokes, “Spread dating rumors! [On Ma Eum’s love interest] is not Goo Joon Young or Seok Ji Hyung,” referring to the male leads played by Nam Yoon Su and Choi Daniel.

Later, Nam Yoon Su visits On Ma Eum’s family’s comic book café. For her grand entrance, Kim Sejeong shows off the cute, opera, and trot versions she’s prepared and Yoon Seo Ah expresses her amazement as she comments, “My unnie is the best!”

When Kim Sejeong boldly does her overly cute entrance, someone jokes from the side, “How can her face not get red at all [out of embarrassment]?” With a big smile, Kim Sejeong shyly comments, “I’m embarrassed.”