“If You Wish Upon Me” returns this week to delve into the life of a star who is about to burn out. Yoon Gyeo Re (Ji Chang Wook) continues to find his footing amidst Team Genie as certain members of the team start to warm up to him really quickly. The gentle pace of the previous week continues as the show settles into its characters, and the hospice staff members slowly but surely draw a grouchy Gyeo Re into their family. But trouble lurks in the background waiting for a chance to make itself known, and as it turns out, Gyeo Re isn’t the only person with a troubled past.

It turns out there was an extra dimension to Pyeon Yong Ho’s (Jun Moo Song‘s) last wish. He also wanted his family reunited one last time in the home they used to live in. His daughter, her husband, and Yong Ho’s granddaughter rush to visit from overseas upon finding that he is close to death. They have one last meal in the house while Gyeo Re, who still refuses to touch Yeom Soo Ja’s (Yang Hee Kyung‘s) sumptuous cooking, watches on, looking moved but not knowing how to express it.

That’s the thing with Gyeo Re. He genuinely doesn’t know how to express anything that isn’t anger or fear, in part conditioned by his rough upbringing at the orphanage and the brutality of the children there. When someone reaches out to him, he reacts like a wounded animal, snarling back because he isn’t sure that they actually meant it or whether it’s because they want something from him. But his love language seems to be acts of service (no matter if those acts end up causing him harm) because he slips Yong Ho a persimmon in the middle of the night so he can have one, one last time. Only, Yong Ho has already passed. Gyeo Re’s reaction is something to behold, vacillating from disbelief to confusion to bewildered regret as he dazedly says he never got a chance to apologize for being so grouchy. Seo Yeon Joo (Sooyoung) sees right through to the core of him in that moment and blinks back tears, telling him that she’s sure Yong Ho knew. The moment is a transformative one for Gyeo Re because he returns to his Team Genie duties with less of the caustic temperament that he’s known for. And his work is only beginning. 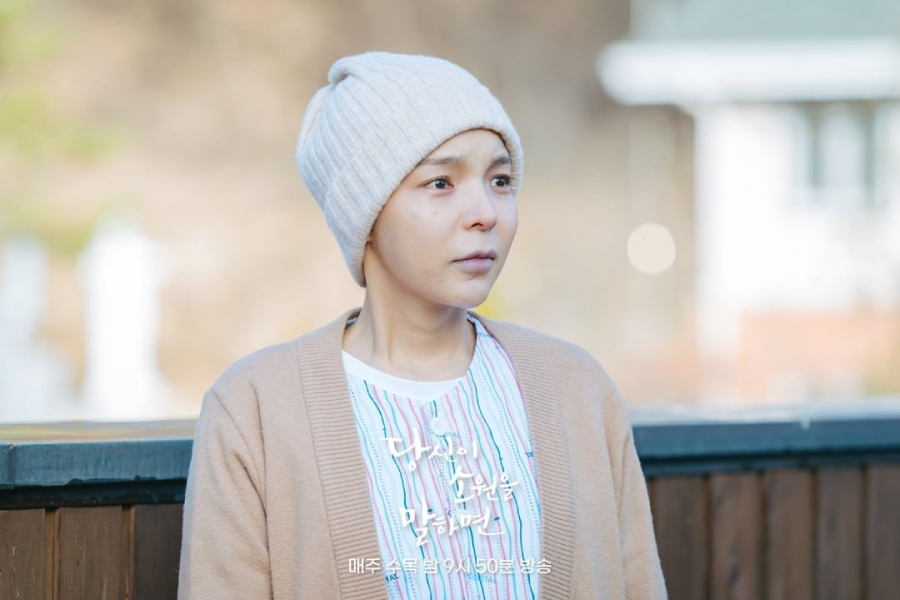 We glimpsed Lim Se Hee (Park Jin Joo, being absolutely fantastic) in the earlier episodes, but this week’s story centers around her. A terminal cancer patient, she butts heads with Yeon Joo when she begs for more pain relievers and accuses Yeon Joo of enjoying watching her suffer. Poor Yeon Joo fights tears while Dr. Yang Chi Hoon (Shin Joo Hwan) cements himself as unlikeable by overriding Yeon Joo and giving Se Hee the meds. But Se Hee is by no means a bad person, just one trying to make the days she has left bearable. A rookie musical actress before her illness, she was inspired after viewing Pyo Gyu Tae (Min Woo Hyuk) on stage. 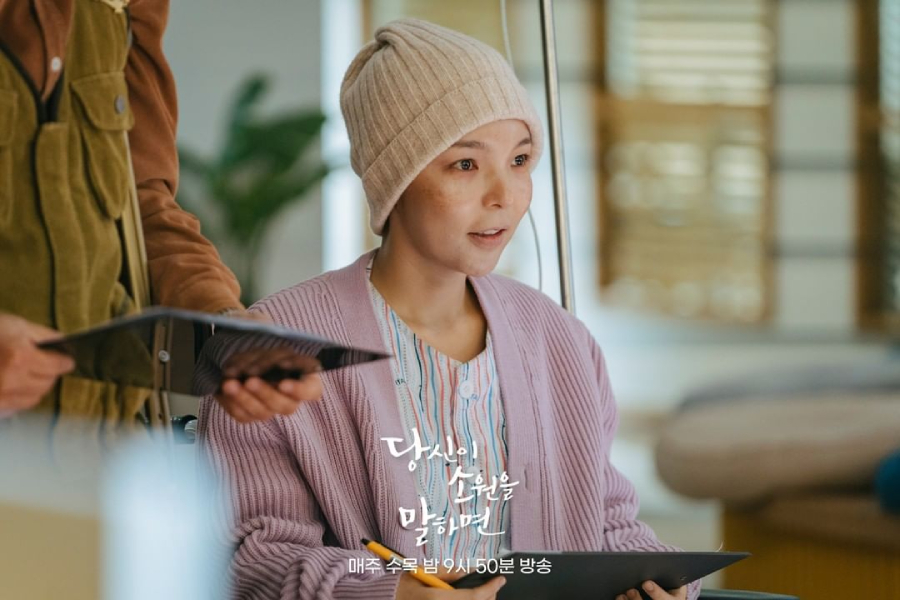 So her last wish naturally involves bringing Pyo Gyu Tae to see her and put on a musical together. But as Kang Tae Shik (Sung Dong Il) and Gyeo Re find, that’s no easy task—firstly because Gyu Tae has a terrible personality, and second because he’s such a hotshot that he refuses to come see some “cancer girl.” Some coaxing and an ill-timed public faux pas on Gyu Tae’s part result in him being forced to visit where he immediately looks disgusted that Se Hee looks like a cancer patient instead of the bombshell she had been before (ugh, this guy). She’s not too impressed with her hero either, but with enough threats of spilling all to the media, they manage to make it work. Gyu Tae even unbends to seemingly start falling in love with Se Hee, though his manager does say that he’s notorious for falling in love at the drop of a hat. And that’s not the only stirring of affection that results from the musical!

3. Gyeo Re and Yeon Joo getting closer

Yeon Joo wasn’t initially all that fond of Gyeo Re, but we see her opinions undergo a revision this week as Gyeo Re proves himself just as capable and invested in the outcomes of Team Genie’s efforts, albeit in his very grouchy way. The two are roped into playing the second leads in Se Hee’s musical because she seems to see what they don’t and loves their bickering dynamic.

The two are terrible actors and send everyone in peals of laughter with their attempts to act in love, but there’s a spark there that they both notice. Observing their dynamic, Chi Hoon isn’t the only one who senses something brewing, and he avoids Team Genie even more. Yeon Joo doesn’t hold his departure against him. Rather, she treats him the same as ever, but Chi Hoon’s face falls when he asks for her opinion of Gyeo Re and hears her talk about what a kind soul he is underneath all his outward brashness. As Yeon Joo and Gyeo Re practice, dance, and even laugh together, they start to reluctantly respect each other. Plus, when Gyeo Re keeps doing casual things like wiping Yeon Joo’s lips after she taste tests his food, it’s no wonder that her heart skips a beat. And he doesn’t even know how swoon-worthy that is!

Yeon Joo even answers his question on why she works out all the time, and the story is heartbreaking. Her mother had cancer, and they lived in an area that wasn’t accessible by ambulance, so Yeon Joo had to carry her to the nearest accessible road in the middle of winter. A middle-schooler at the time, Yeon Joo could barely lift her mother, and the two were stuck for the longest time with Yeon Joo crying and wishing she was stronger. The story moves Gyeo Re because he has the softest heart, and he realizes that not everyone has chosen to hide inside themselves because of their trauma and that the hospice is a safe place to let himself be happy. This is why he comes to Yeon Joo’s defense when the ideological schism between her and Dr. Yang finally ruptures.

4. Gyeo Re standing up for Yeon Joo 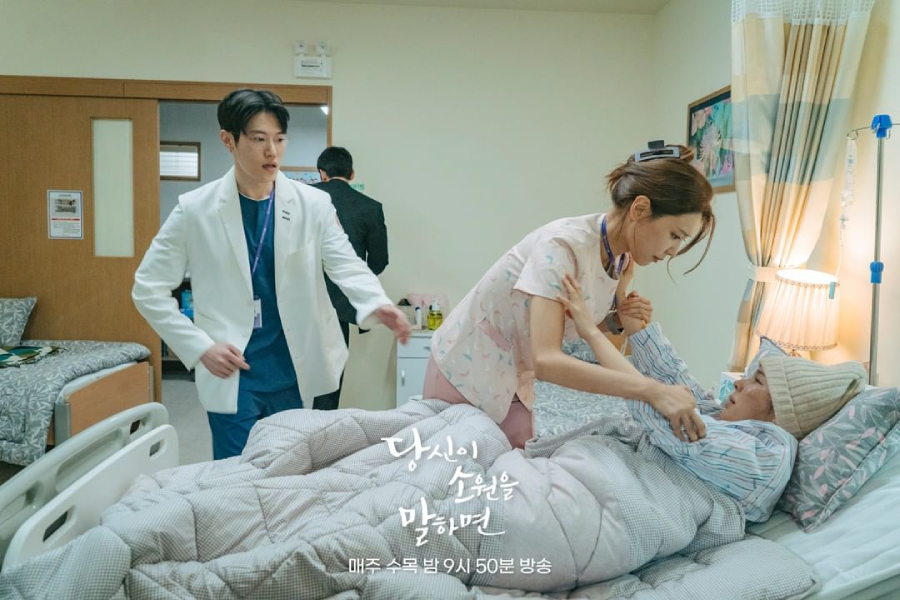 Chi Hoon’s disapproval of Team Genie’s work has been silently running through the episodes for some time now. It isn’t clear as to why he feels that way especially since he used to be part of Team Genie until recently. But perhaps that role was to rein in what he believed was excessed on Team Genie’s part. As he tells Tae Shik, he doesn’t like that they “remind” patients that they’re dying. It’s a ludicrous idea because the patient undoubtedly knows what they’re feeling, and to refuse them a last wish based on the idea that the doctor always knows what’s best for their mental and emotional health is very paternalistic. 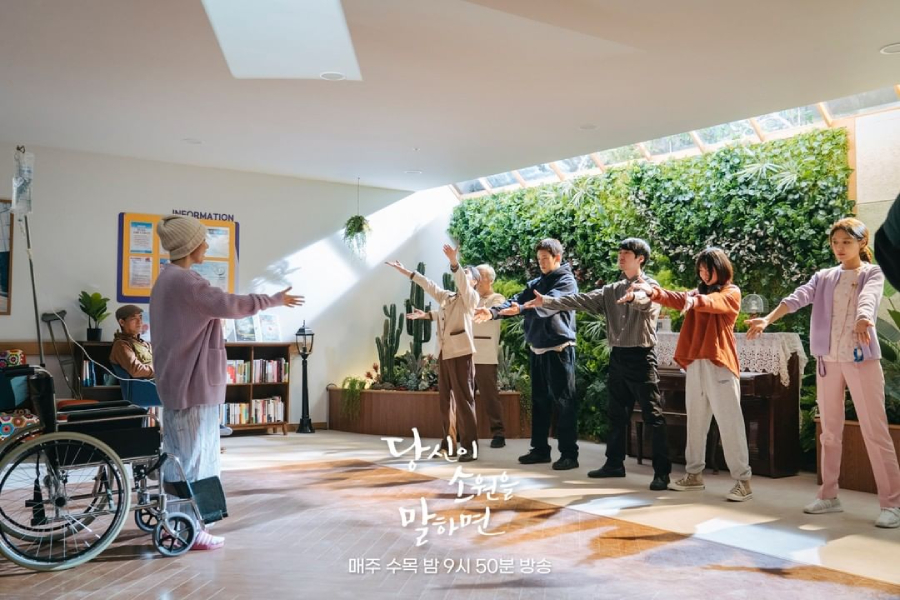 Matters finally come to a head when Se Hee falls ill before the musical and pleads for some pain medication so she can stand on stage and see her dream come true. But Chi Hoon refuses, acting like he knows what’s best and valuing Se Hee’s physical health (which is literally deteriorating) over her mental health. This is her biggest dream. She’s quite literally performing with a top musical star, and he’s shutting it down because he thinks he knows what’s best. Yeon Joo steps in to ask him to just give her the medication, which he had no issue doing before, even overriding Yeon Joo’s concerns. But Chi Hoon gets quite nasty about it and yells at her in front of everyone, saying that he’ll “forbid” her from working with Team Genie, which seems like an abuse of authority. Gyeo Re has enough and steps in, asking him what he thinks he’s doing, while poor Yeon Joo looks ashamed to be at the center of such a public argument. She tries to drag Gyeo Re away, which is when Chi Hoon threatens to kick Gyeo Re out of the hospital and asks who he even is to be here. Gyeo Re’s response? That he’s Team Genie, someone who grants wishes. Yeon Joo pretty much has heart eyes. And that’s where the show leaves us this week!

Overall, it’s a delight to see Gyeo Re slowly softening up to Team Genie from trying to hide how much he enjoys Yeom Soo Ja’s food (though there seems to be a story there on why he avoids it in the first place) to reluctantly growing interested in Yeon Joo and acting in Se Hee’s musical. But Team Genie isn’t without its secrets. Take for example the locked room 403 on the fourth floor that no one seems to want to talk about. Why does Soo Ja go in there and report to Tae Shik looking secretive? And why does even Yeon Joo lie about it being a storage closet? 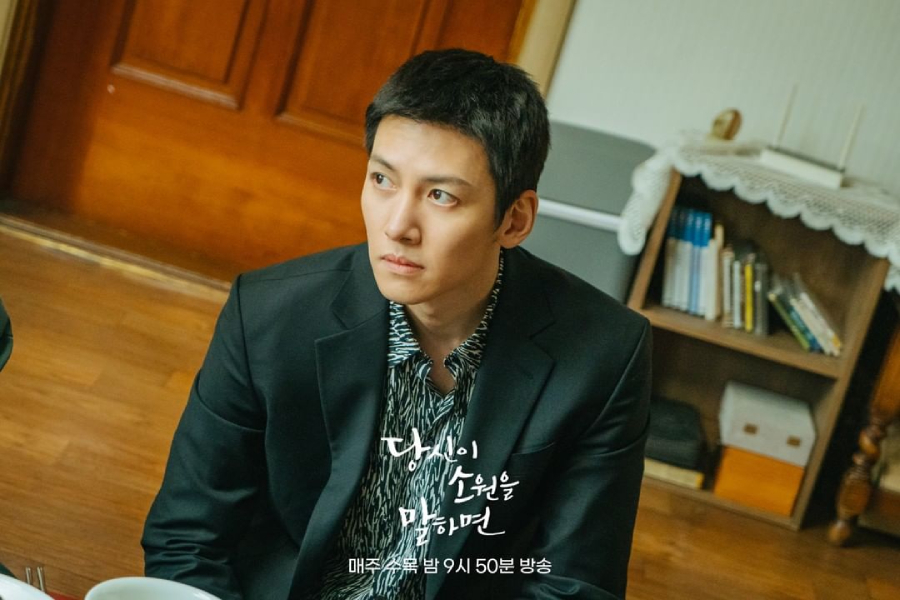 Moreover, Gyeo Re’s still hiding his own past. We’ve seen flashes of Ha Jun Kyung (Won Ji An) thus far, enough to know that she grew up in an orphanage with Gyeo Re who protected her. But she was forced to become a streamer who sold online affection and occasionally other things to viewers (the money was pocketed by the men chasing Gyeo Re). She’s also the real person responsible for the arson that almost killed her and Gyeo Re. With the preview showing her being released from prison, she promises to shake up the life Gyeo Re’s been slowly healing. Uh-oh. But next week also shows us an accidental kiss between Yeon Joo and Gyeo Re! With this much change in such a short time, it should be interesting to see how Gyeo Re reacts. Wednesday, come faster!

Soompi Spotlight
Ji Chang Wook
Sooyoung
Sung Dong Il
Yang Hee Kyung
Won Ji An
If You Wish Upon Me
How does this article make you feel?