“If You Wish Upon Me” returns this week with musicals, mayhem, and much contemplation. Despite Yoon Gyeo Re’s (Ji Chang Wook’s) outward surliness, he’s slowly but surely being adopted into the hospice family. And these days, he’s stopped trying to even put up a fight. His court-mandated volunteer hours are coming to an end, but Gyeo Re’s emotional investment in Team Genie is well on its way to keeping him here even without the threat of prison. That is, if old enemies don’t find him first.

Here are my favorite moments from this week’s episodes that show how much of a marshmallow Gyeo Re is!

1. Gyeo Re hiding in his car to cry after Se Hee’s death

After this momentous declaration the previous week, Dr. Yang Chi Hoon (Shin Ju Hwan) fumes and tries to put his foot down on Se Hee’s (Park Jin Joo‘s) musical, only to relent when Tae Shik intervenes. We’ve seen Gyeo Re softening towards Team Genie this whole time, but it’s the first time he’s outwardly displayed that he considers himself part of the team. The performance ends up happening with only a single hilarious stutter when one of the hospice people bumps into Gyeo Re and Seo Yeon Joo (Sooyoung) as they’re giving some seriously terrible acting. Naturally we end up with this.

The crowd laughs, and Chi Hoon fumes, but the performance is a resounding success and means the world to Se Hee who leaves with her parents that night. Not long after, she passes away, sending her farewells in a heart-breaking letter to Team Genie. The team tears up hearing just how much she treasured having that last wish granted, but no one is more devastated than Gyeo Re who storms out of the room. Yeon Joo finds him hiding in his car, clearly having cried, and he asks how she and the others are so unaffected when someone they performed and danced and laughed with is dead. Yeon Joo gently tells him that it’s not that they feel nothing but that they feel it silently after all these years of seeing death. It gives them the drive to make sure that everyone gets as many moments of happiness as they can before death. The conversation sticks with Gyeo Re, especially when she follows it up with a question he’s wondered at his whole life.

Yeon Joo gives Gyeo Re pause when she asks for moments where he’s been happy. He goes through her list of examples with some confusion, having never had people who took care of him or watched out for him. When she asks if he’s ever been in love, he thinks for a long moment, repeating the word as if it’s a question. It’s pretty obvious why Yeon Joo is asking him all this. She wants to get to know him better because she’s been growing feelings for this softhearted grouch ever since he painted persimmons all night just to make Pyeon Yong Ho (Jun Moo Song) happy.

But what’s equally heartwarming is when he turns those same questions on her and asks her about three times she’s felt joy in her life. He hides a smile listening to her list: exercising, working as a nurse, and working as a member of Team Genie, but he pauses when she says she’s also just found a new joy in life.

Yess, Yeon Joo! To say that Gyeo Re is shook would be an understatement, especially when she says that “the man” has a lovely smile and that she wonders how she can make him smile more often. Gyeo Re can barely hide a smile but asks if this is a confession and why she isn’t playing coy or acting shy. Yeon Joo straightforwardly admits that it is and that she’s never bothered learning the whole “acting shy” bit. These two are the cutest. He’s emotionally constipated, and she wears her heart on her sleeve. A match in heaven!

When Gyeo Re witnesses Tae Shik accepting money from Se Hee’s parents, he thinks the worst and follows Tae Shik to the ambulance where he witnesses him stashing the money in a box with a lot of gold. Gyeo Re says nothing about it and asks nothing, but when he also happens upon Tae Shik being cornered by gangsters who demand money from him and who reveal that he was faking his leg injury, Gyeo Re can’t stop himself from exploding. This entire time, Gyeo Re has seen nothing but the ugly side of the world. With Team Genie, he’s seen how good it can be, so he’s so disappointed to see that Tae Shik is no different from the people he’s dealt with his whole life. 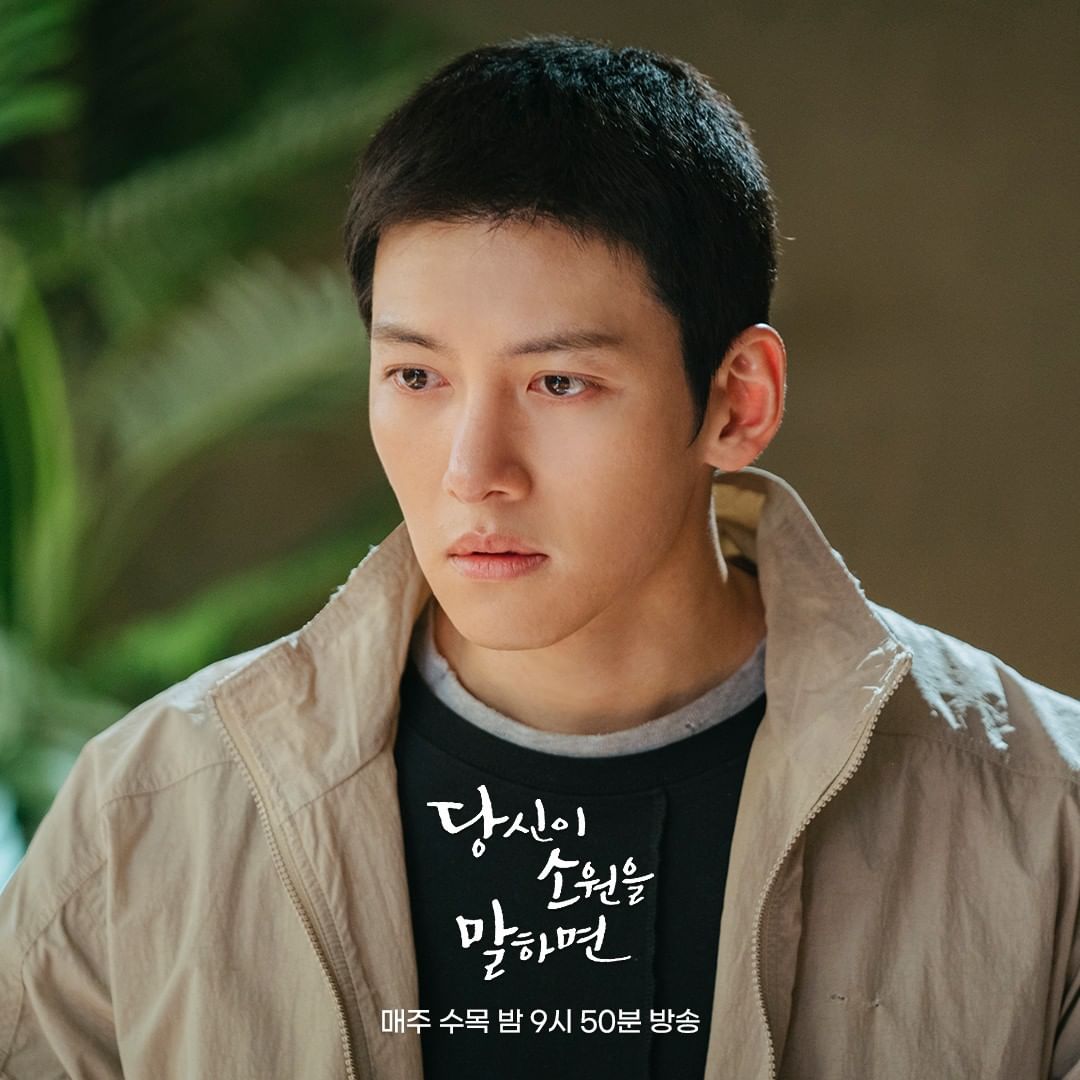 He tells Tae Shik that he’s been suspected for this and that his whole life so he gave Tae Shik the benefit of the doubt, but this is too weird even for him. He demands answers, but Tae Shik remains silent, though he trashes his crutches in an uncharacteristic fit of anger. However, what we know and that Gyeo Re doesn’t is that Tae Shik is dying. He was a lung cancer patient at the hospice before he went into remission and became part of Team Genie, but his cancer has returned. He has six months left at most. It wouldn’t be surprising if he’s collecting money to provide for Gyeo Re’s future, given that he seems to know Gyeo Re from the past. Gyeo Re doesn’t dig further when Tae Shik doesn’t answer, and it’s clear that he still looks up to the other man. But this relationship still has so many secrets to uncover that we can only hope that Gyeo Re’s heart isn’t broken even further in the process.

4. Gyeo Re’s will and his paintings

This moment is both worrisome and heartwarming. It isn’t clear as to why Gyeo Re has begun writing his will, but in it he donates all his money to Team Genie! It’s actually heart-breaking watching him write it with such a big smile on his face because he knows it’ll be used for good. He doesn’t seem to care that he won’t be there to see it. But why is he writing the will in the first place? Is it because he fears being caught by the gangsters after him? Or is Gyeo Re ill too? (Please no).

Then there are his paintings and the way he’s involved himself at the hospital. He’s painting an elderly patient when Tae Shik stops by and exclaims that he’s painting the elderly lady in a beautiful hanbok. Gyeo Re is doing nothing of the sort, painting the lady as she is, with all her wrinkles, frailty, and death looming in her eyes. But he stops and realizes what Tae Shik is indirectly saying: to draw them as they truly are, not in their final form before they leave this world. And Gyeo Re immediately does just that. He receives incoming patients and even performs minor first aid. And the way he brags about it to the other patients is just so adorable, saying things like, “It’s took me so long to save him.” There is so much love in Gyeo Re that the world truly missed out, treating him the way it did.

5. Gyeo Re helping Seo Jin with her revenge

When a famous news anchor hits Yoo Seo Jin’s (Jeon Chae Eun’s) boyfriend Kwak Hyung Joon (Yeo One) after drinking and driving, her world falls apart. She pleads with Tae Shik to help her get revenge, but he refuses, resulting in her trying to take matters in her own hands. But getting to the news anchor proves difficult because of how powerful he is. He doesn’t care about what he’s done. The only person who looks horrified is his young daughter Han Ji Woo (Ock Ye Rin) who was in the car and witnessed the hit-and-run. She’s seriously traumatized by it and refuses to go near her father afterwards.

Recognizing that Seo Jin’s hurting, Gyeo Re steps in to help with her revenge but also gently tells her not to do anything that would ultimately hurt her. Looking conflicted, Seo Jin nevertheless goes ahead with her plan. She talks her way into Ji Woo’s elementary school while Gyeo Re bribes his way into the news anchor’s hospital room. At the school, Seo Jin confronts Ji Woo and video calls Gyeo Re, who shows the news anchor that his daughter is with Seo Jin. It’s pretty dark seeing a high schooler threaten to kidnap the daughter of a powerful man for revenge and seeing it work too. But rather than being frightened, after the call, Ji Woo sobs, apologizing on behalf of her father. Both girls hug, wondering why they have to bear the brunt of these adults’ actions. And that’s how Tae Shik finds them because Gyeo Re alerted him before beginning Seo Jin’s plan.

It’s another example of how caring Gyeo Re is. Despite his differences and tension with Tae Shik, he set everything aside to ensure that Seo Jin would be safe. And he risked being an accessory to a threat of kidnapping by standing with Seo Jin. Thankfully, all goes well. Hyung Joon recovers, the news anchor takes responsibility because his daughter demands it, and Seo Jin smiles again.

But trouble looms on the horizon. Ha Jun Kyung (Won Ji An) is officially out of prison and returns to her cam girl job after waiting days for Gyeo Re to call. She’s fallen right back in with the same bad crowd Gyeo Re’s been trying to escape, and she doesn’t exactly seem sane. She has him saved as her boyfriend, but it remains to be seen if the relationship was reciprocal. Meanwhile, Gyeo Re doesn’t know it, but the gangsters’ boss is the same man who threatened Tae Shik, and the boss is after both of them. We still have secrets galore about the mysterious patient in Room 403, and Gyeo Re’s community hours are almost up. Next week, promises place Team Genie in quite the conundrum with a missing patient, Dr. Yang tries to shoot his shot with Yeon Joo, and Jun Kyung hunts Gyeo Re down. Will he be able to remain at the home he’s only just found? Only next week knows!

Currently Watching:  “Adamas,” “Alchemy of Souls,” “Big Mouth,” “If You Wish Upon Me,” and “Little Women.”
Looking Forward to: “Island,” “Chaebol’s Youngest Son,” “Queen of the Scene,” “Blind,” “One Dollar Lawyer,” and “Black Knight.”

Girls' Generation
Soompi Spotlight
Ji Chang Wook
Sooyoung
Sung Dong Il
Yang Hee Kyung
Won Ji An
If You Wish Upon Me
How does this article make you feel?