KBS2’s “Three Siblings Bravely” is gearing up for its premiere!

“Three Siblings Bravely” is a lively family drama about three siblings and follows the romance of Lee Sang Joon, the eldest son who got everything while growing up. The story unpacks what happens when he falls in love with Kim Tae Joo, who is also the oldest of her siblings but instead grew up sacrificing everything for her family.

Im Joo Hwan will be starring as Lee Sang Joon, the eldest son of the Lee family. He has always been treated as a prince and has extraordinary love for his family. Lee Sang Joon grows up to be a successful actor who pays off his family’s debts, but one day, he gets into an accident during filming and lands in the hospital where he reunites with Kim Tae Joo, his first love from elementary school.

Lee Ha Na will be playing Kim Tae Joo, the eldest daughter of the Kim family who has given up and sacrificed everything for her younger siblings. However, she will willingly scream when she’s angry and she cuts off people she hates without hesitation.

Kim So Eun will star in the drama as Kim So Rim, the middle child of the Kim family and Kim Tae Joo’s younger sister. A friendly and sociable person who gets along well with her sisters, Kim So Rim is a beautiful pilates instructor whose sunny personality attracts others.

Lee Yoo Jin will take the role of Kim Geon Woo, the younger brother of Kim Tae Joo and Kim So Rim. While he’s the pampered baby sibling at home, Kim Geon Woo is a trustworthy and caring doctor at work. With his sweet and optimistic personality, it’s no wonder Kim Geon Woo is loved wherever he goes.

The new poster features the four characters who are neatly dressed in denim and looking at the same place. Kim Tae Joo exudes a lively aura with a bright expression on her face, whereas Lee Sang Joon radiates positive energy with his determined spirit. Kim So Rim and Lee Yoo Jin show youthful energy, piquing curiosity about their roles in the family. The text on the poster reads, “From now on, we’ll bravely,” leading viewers to wonder what kind of courageous story they will tell. 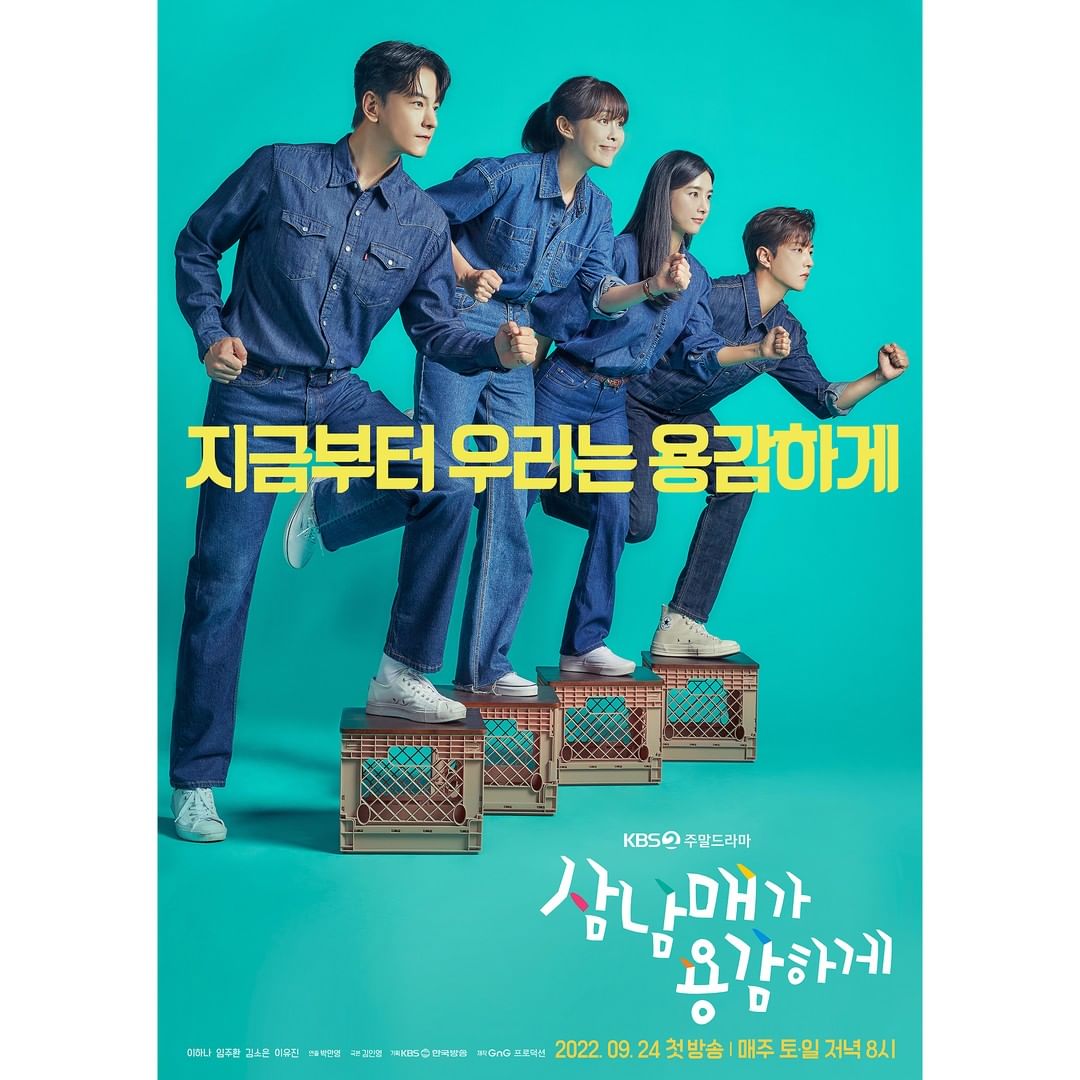 The production team commented, “While planning the poster, we thought a lot about how to portray the courage of the actors like the title of the drama. We believed that if the actors wore a rather rough and dark denim fashion, they would naturally showcase the promising spirit of youth. The backdrop is similar to Korea’s representative color blue, and we want to be remembered as Korea’s representative drama by adding mint color to it.”

“Three Siblings Bravely” will premiere on September 24 at 8 p.m. KST.

Watch Lee Yoo Jin in “Melo Is My Nature” with subtitles here!