IVE achieved a double crown on this week’s Circle charts after topping both the physical album chart and the digital download chart with their new single “After LIKE.” 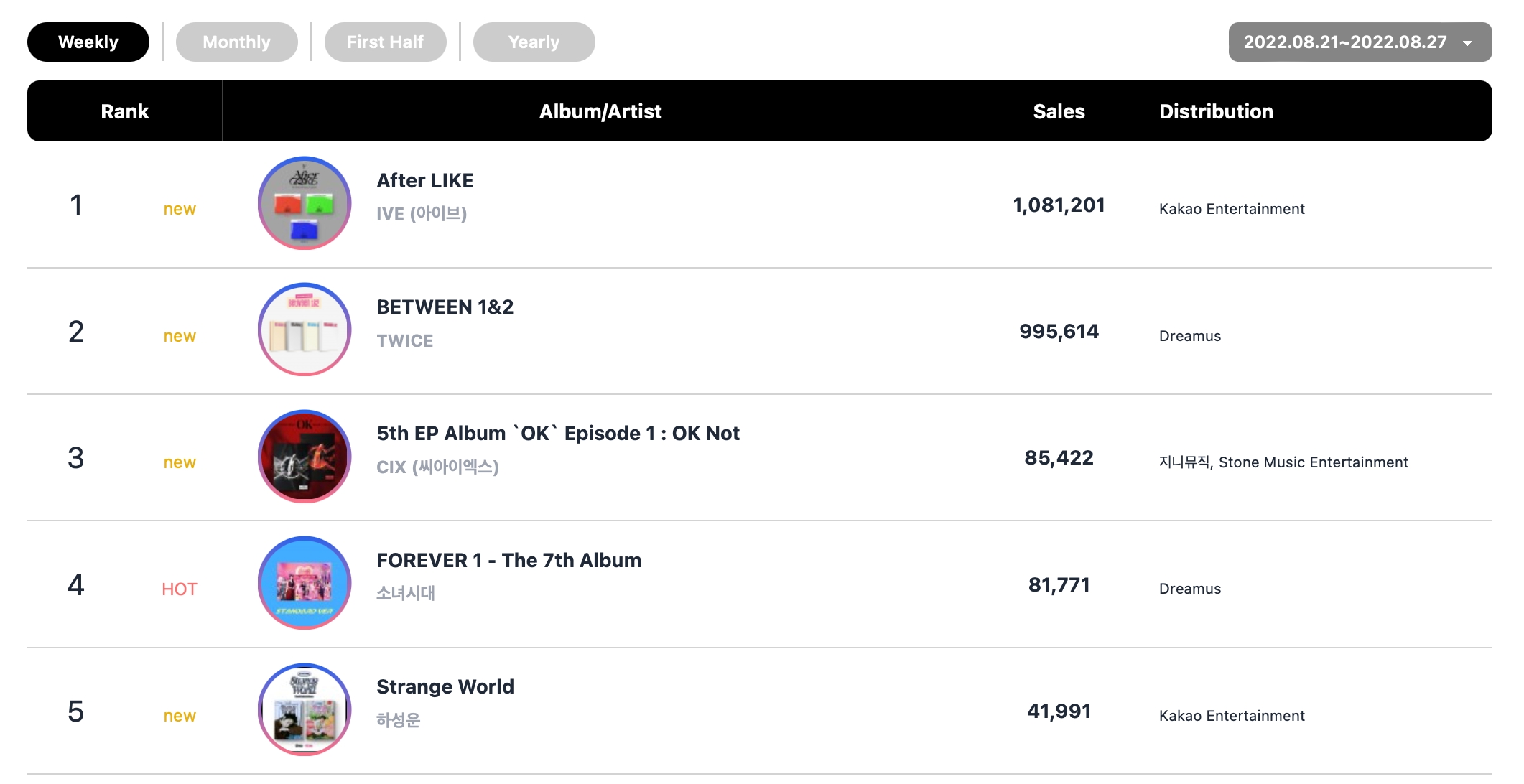 BLACKPINK’s pre-release single “Pink Venom” held onto its spot at No. 3, followed by Girls’ Generation’s latest title track “FOREVER 1” at No. 4 and NewJeans’ debut track “Attention” at No. 5. 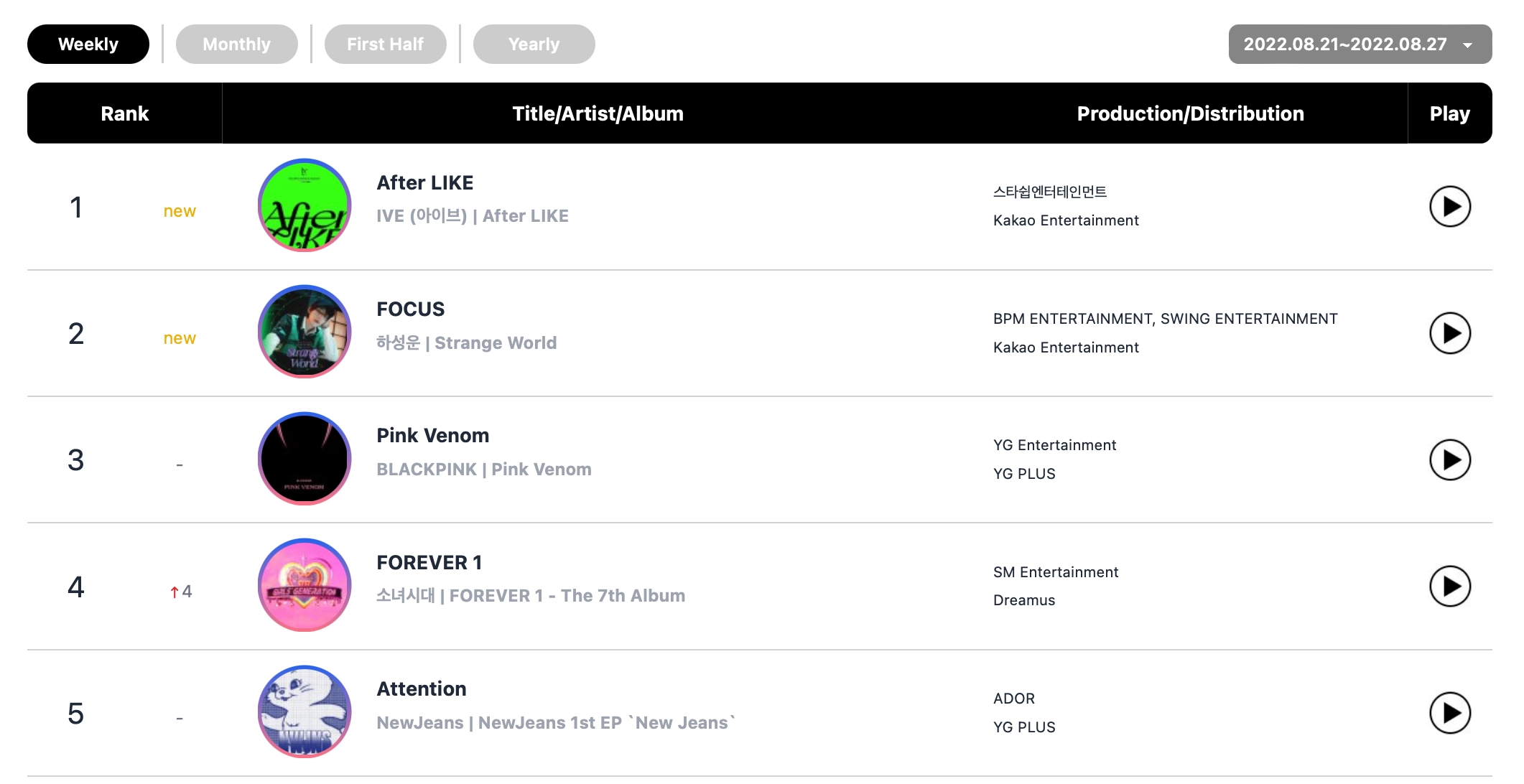 NewJeans maintained their double crown on this week’s charts, topping both the overall digital chart and the streaming chart for the second consecutive week with their smash hit “Attention.”

In addition to “Attention” remaining No. 1 on the overall digital chart, NewJeans’ “Hype Boy” stayed strong at No. 4 as well.

BLACKPINK’s “Pink Venom” shot to No. 2 on the overall digital chart this week, while IVE’s “After LIKE” debuted at No. 3 and Girls’ Generation’s “FOREVER 1” climbed to No. 5. 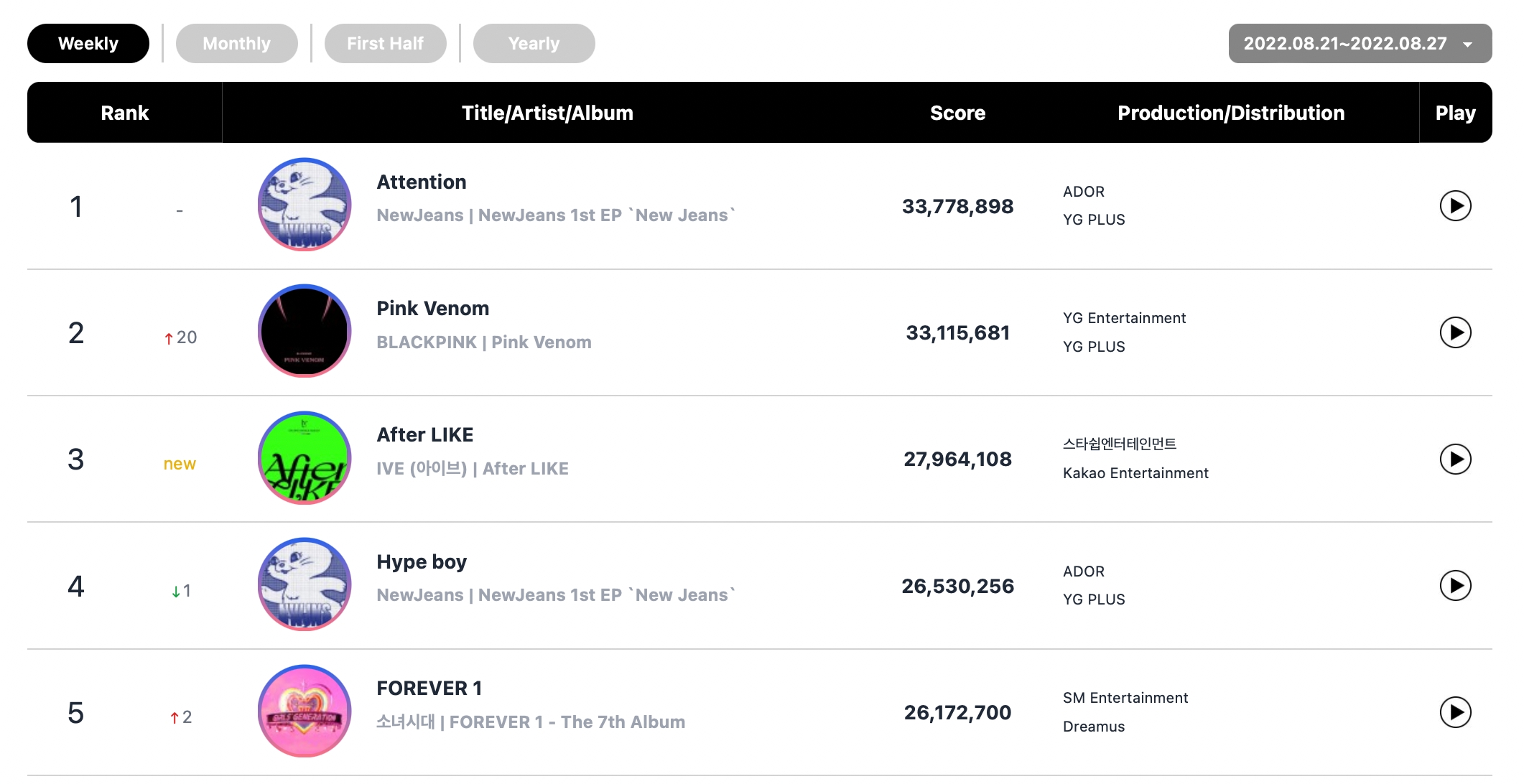 Once again, NewJeans claimed two out of the top five spots on this week’s streaming chart, with “Attention” holding steady at No. 1 and “Hype Boy” rising to No. 3. 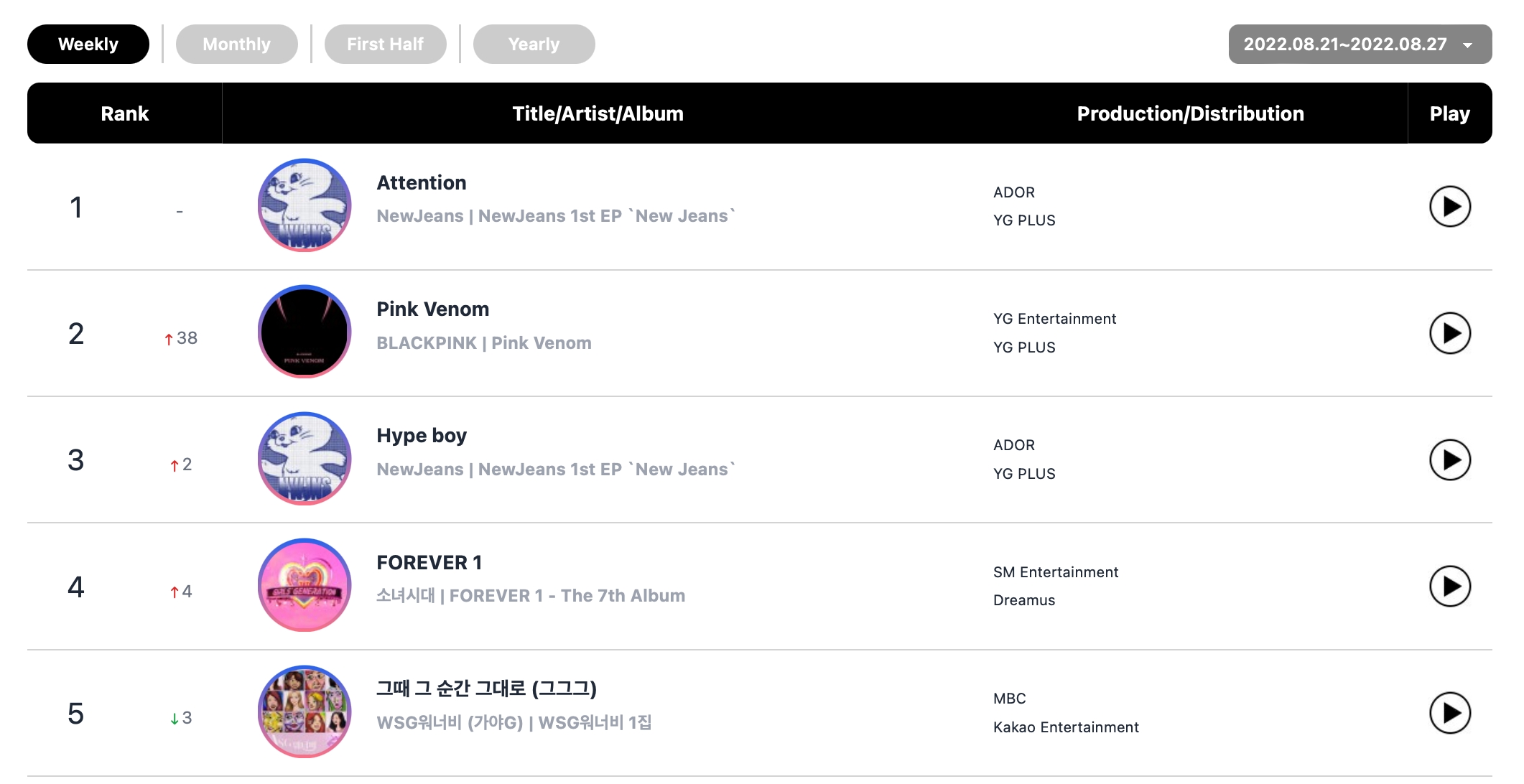 BLACKPINK also achieved their own double crown this week, topping both the social chart and the new Global K-Pop Chart (which is based on global streaming).

The group’s latest hit “Pink Venom” held onto its spot at No. 1 on the Global K-Pop chart for the second consecutive week, while IVE’s “After LIKE” debuted at No. 2.

NewJeans swept the next two spots on the chart with “Attention” and “Hype Boy,” which ranked No. 3 and No. 4 respectively, and Girls’ Generation’s “FOREVER 1” rounded out the top five for the week. 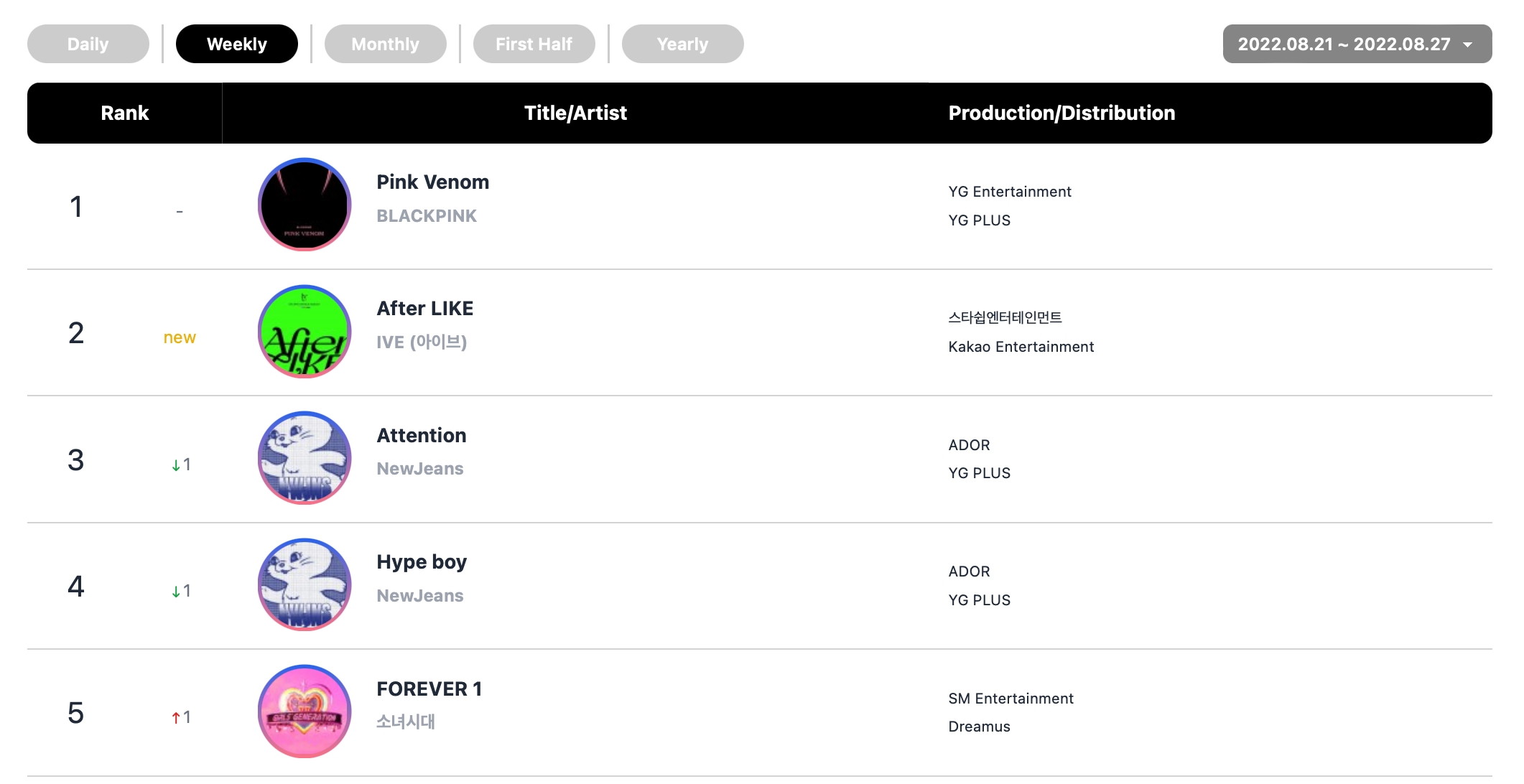 BLACKPINK rose to No. 1 on this week’s social chart, followed by BTS at No. 2.

TWICE’s Nayeon climbed to No. 3 for the week, trailed by BLACKPINK’s Lisa at No. 4 and NewJeans at No. 5. 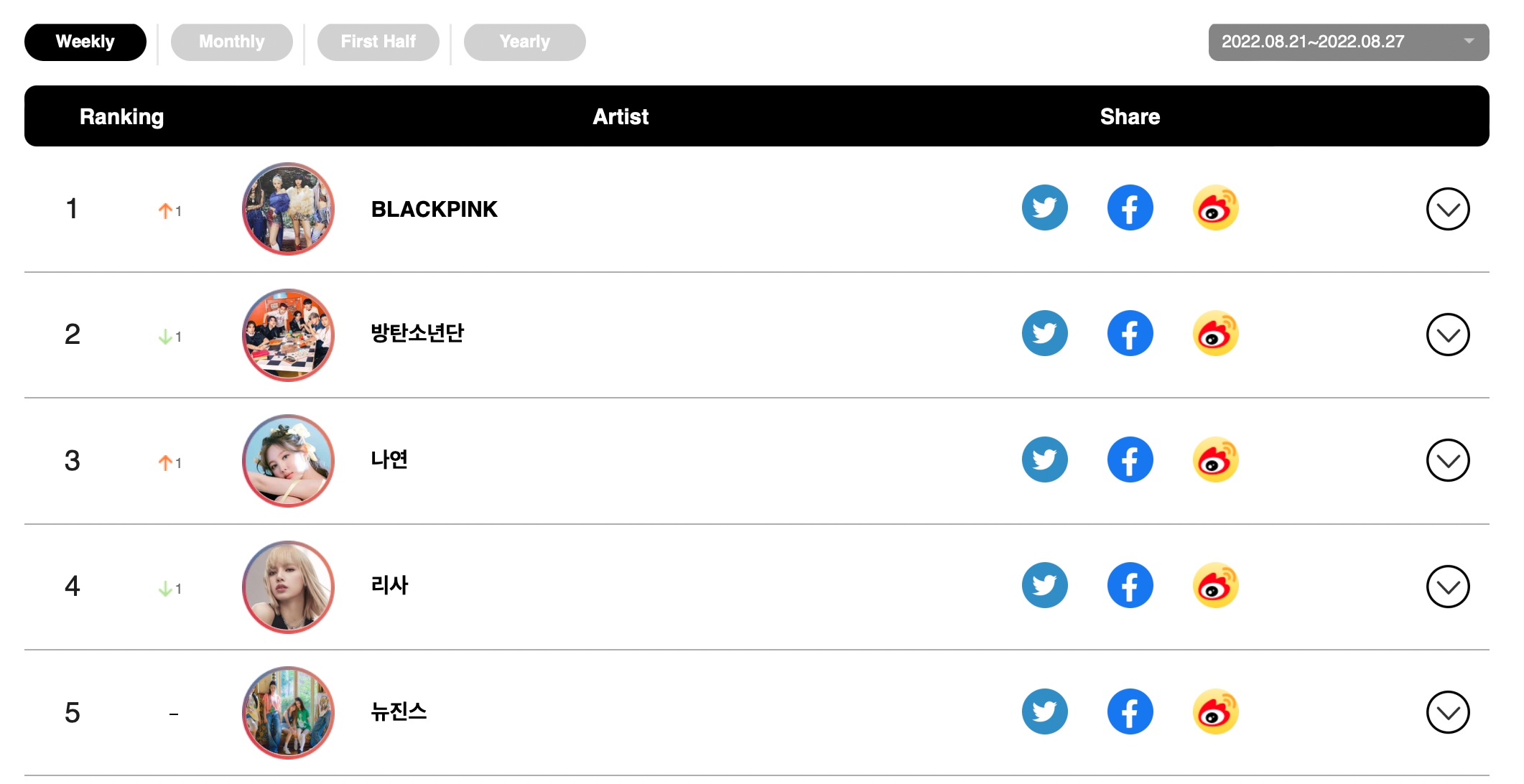