Sunye recently opened up about her decision to leave the Wonder Girls.

Sunye, originally known best as a member of the hit girl group Wonder Girls, got married in January 2013, moved to Canada shortly after, and gave birth to her first child in October of the same year. Her second and third daughters were born in 2016 and 2019. While Sunye initially took an indefinite leave from the Wonder Girls at the beginning of 2013, she did not officially withdraw from the group until July 2015.

Sunye revealed that since her three kids were on summer vacation, they had all travelled to Korea. She added that since no one around her was married when she tied the knot, she learned about parenting through books and blogs. When asked if she had plans to have any more children, Sunye responded, “I’ve said this before on broadcasts but the ‘factory’ is closed. We’re satisfied with three daughters.”

The singer reflected on her first pregnancy, sharing, “I didn’t really feel any certain way and just accepted it saying, ‘It’s okay, this is just the start of another chapter in my life.’ Because [getting married] is a decision I made. I wasn’t really shocked.”

As she raised her children in Canada, Sunye explained, “I didn’t have anyone around me to depend on. Because of my personality, I’m not used to relying on others. I just made it difficult for myself.”

Dr. Oh Eun Young reassured her that raising kids in a different country is very difficult and added, “Anyone in your situation would’ve had a hard time, but I see you’re denying all those difficulties. It’s hard to comfortably express the natural emotions and thoughts you have.” Sunye responded that she often gets misunderstood for being assertive and added, “It was the same when I decided to withdraw from the Wonder Girls.”

At the time of her withdrawal, the general public opinion was that Sunye had abandoned the Wonder Girls for a man, even though she was the leader and main vocal of the group. She revealed that although the public may have seen her as the core of the popular group, she felt pressured by that expectation from the very start.

Sunye elaborated, “Regarding my mental state at that time, I had so many question marks within myself. Since I was an idol, I knew that I had a lot of influence on teens and I recognized that even more while working. When we released a song or did an interview, I began to grow incredibly cautious. Even with a single lyric, I wondered, ‘What if this line has a bad influence?'” 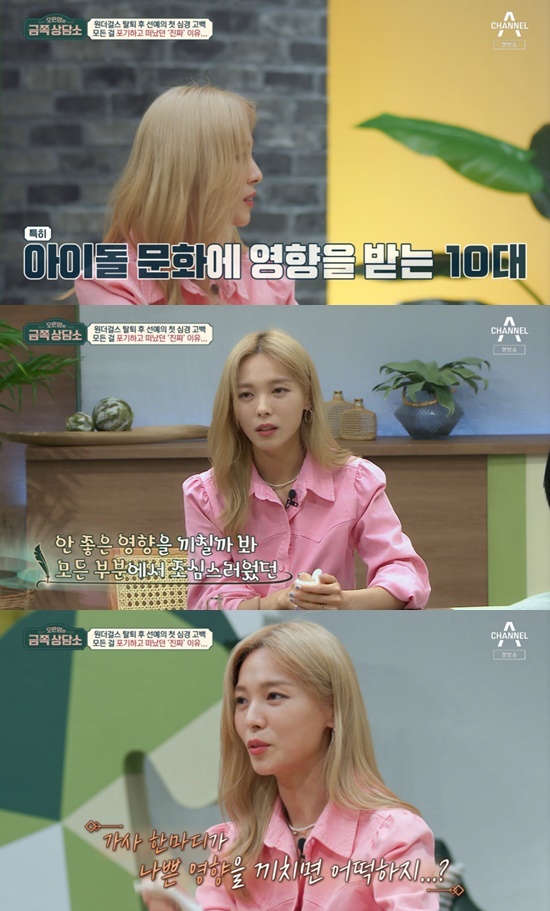 Regarding the real reason why she left the group, Sunye shared, “When we were on the road to success, my father and grandfather passed away. After experiencing two funerals, I began to think about my life goals. [I thought,] ‘Even if we’re on this road to success, we eventually become a handful of ash,’ and I had so many questions.”

She added, “Although I had definitely achieved what I wanted, I wondered, ‘Is this happiness really everything I wanted?’ There was an inexplainable emptiness that came from that. It didn’t seem like it would get filled just because I became more famous or made more money. As I was holding onto those concerns, going up on stage didn’t make me happy as it did in the past. I thought that it was time for me to rest.”

“As this gradually got worse,” Sunye continued, “I began to feel sorry to my members for the concerns I had and the emotions I felt on stage. I started thinking that going on stage and participating in our activities with this mindset was rather damaging to my members.” 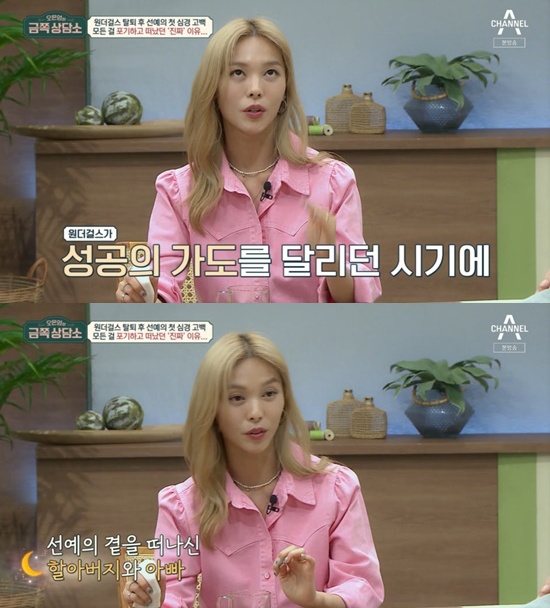 Dr. Oh Eun Young replied, “I understand you as a psychiatrist, but as a member of the public, it doesn’t make sense. Girl groups are affected even if one member is missing. You end up resenting the member for withdrawing. Why did you make such an extreme decision?”

Sunye replied, “I think there was a misunderstanding about my withdrawal. At the time, [Wonder Girls was on a hiatus because] we were preparing a band for two to three years, but it became misunderstood that the other members were being inconvenienced because of me. As I thought that the other members could not get hurt and endure hardships because of me, I believed I had to officially and cleanly organize my role [by withdrawing] so that I could also promote independently.”

Although Wonder Girls has since disbanded, Dr. Oh Eun Young asked Sunye whether her current self would still have made the decision to leave the group in 2015. Sunye candidly responded, “I think Sunye now would not have let go of Wonder Girls and continued with them, but I think I still would’ve gotten married.”

Looking back, she added that if she had continued, she would’ve been better able to communicate with fans and give them more time to get accustomed to the changes in Sunye’s personal life. Sunye then shared, “If I got the chance, I had wanted to officially apologize [to fans] and say that I was really sorry. It was not my intention – why would I throw away the Wonder Girls? I wanted to say that was never my intention. I’m really sorry for unintentionally hurting you and I hope you understand how I feel.”

Earlier this year, Sunye signed with Blockberry Creative and released her first solo album “GENUINE” this past July.

Sunye
Wonder Girls
How does this article make you feel?