First Impressions: “Love In Contract” Is A Delightful Marriage Of Mystery & Slow-Burn Romance

Park Min Young is back in full form for the utterly delightful “Love in Contract”! Murder, mystery, and two men who couldn’t be more different populate tvN’s newest drama. But this isn’t just another story of a girl trying to choose between two men. Our girl’s got her heart set on one—that is, if his secrets don’t drive her away!

Here’s everything (and everyone) we loved in the premiere episodes!

Meet Choi Sang Eun (Park Min Young), the girl who can do it all.

No seriously, she can do it all.

The only daughter of Ina Group, Sang Eun is estranged from her family, her former name (Jamie), and anything to do with the constricting and fearful years that formed that part of her life. Now, she runs a very successful business as a professional wife, having used her stunning looks to rise from the ashes after eschewing her family’s attempt to force her into marriage. But for all our girl’s talents, Sang Eun is a walking conundrum. She hates men but works as a professional wife (never as a mother though) six days of the week. She guards Sundays as her me-time but still uses it to make the daughter of a pretty terrible client a bit happier. She hates Yoo Mi Ho (Jin Kyung), the aide who raised her since she was a child, but persists in sending her a heft monthly stipend. She vows that she’s retiring from the fake wife business but smiles brightest when she’s doing it.

And she has it all, but she isn’t happy. For all her fake marriages, Sang Eun thrives on the excitement of romance, of weddings, and of all the joy and fun that they can evoke. She just loves to help whenever and wherever she can—whether it’s taking on Woo Gwang Nam (Kang Hyung Suk) as a client because his sisters verbally abuse him for being gay or whether it’s having dinner with Jung Ji Ho (Go Kyung Pyo) every Monday, Wednesday, and Friday for five years because she assumes that he has a crush on her. She’s been helping so much that she hasn’t taken care of her own happiness. When she and Gwang Nam decide to fulfill their long-held dream of moving to Canada and finding true love, they make a plan, set a deadline, and book tickets. And that’s exactly when love and happiness choose to knock on her door! 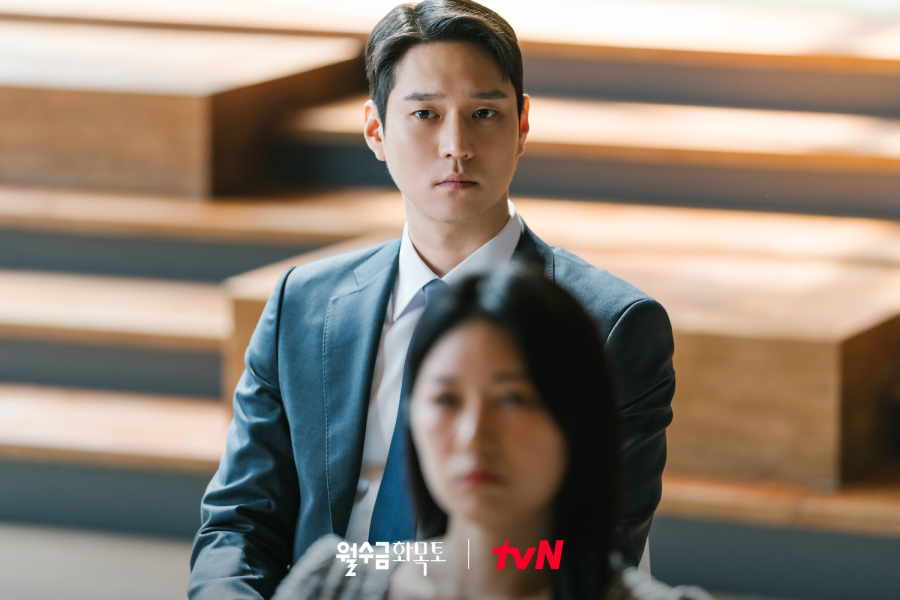 To call Ji Ho mysterious would be an understatement. He shows up from nowhere, proposes to Sang Eun out of nowhere, and asks that they have dinner out of nowhere. He’s the first client she accepts without knowing his real reason for wanting a fake wife. He’s said about 50 words to her in five years, is a master cook, and has trouble communicating. And that’s all Sang Eun knows. But beneath that man lies another. 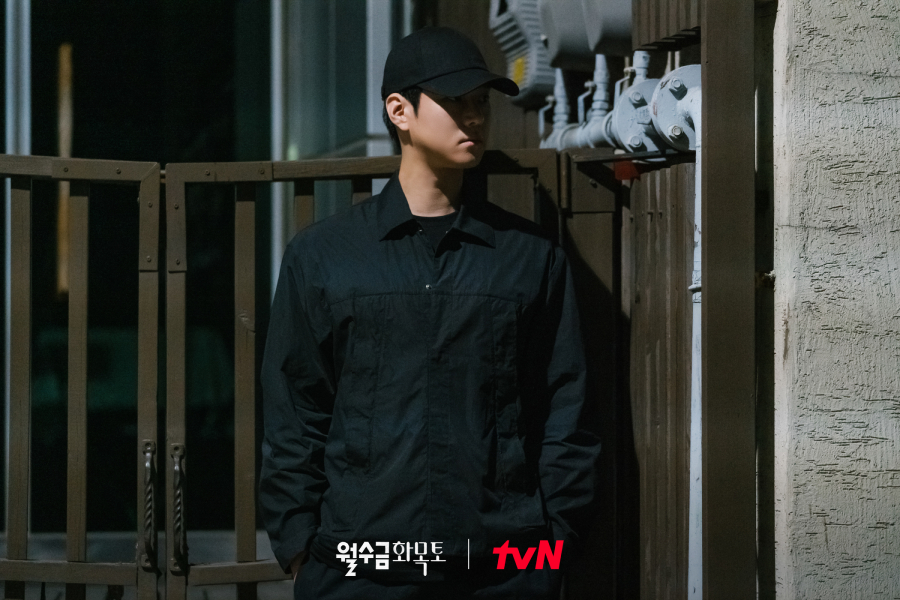 This man seems to have been divorced in the past, seems to stalk women at night who are found dead the next morning, and re-enacts stabbings in stairwells. He’s one who goes to speech therapy classes, who doesn’t understand it when people take offense to his blunt manner of speech, but who defends animals and whom animals like. And finally, he seems to somehow know Sang Eun.

Ji Ho is a master of silences, but like Sang Eun, he holds his hurt deep. Going through her planner and realizing that she’s leaving, he proposes to end their marriage first to spare himself the hurt of hearing her say it first. He relieves his ex-wife’s words, believing himself incapable of proper care or feeling. And he puts Sang Eun’s feelings before his own, letting her go no matter how much he doesn’t want to. The show seems to be trying to throw us red herrings that Ji Ho is a killer of some sort, but the deep care he has for Sang Eun makes that a difficult sell. But there’s one person who believes the theory in seconds! 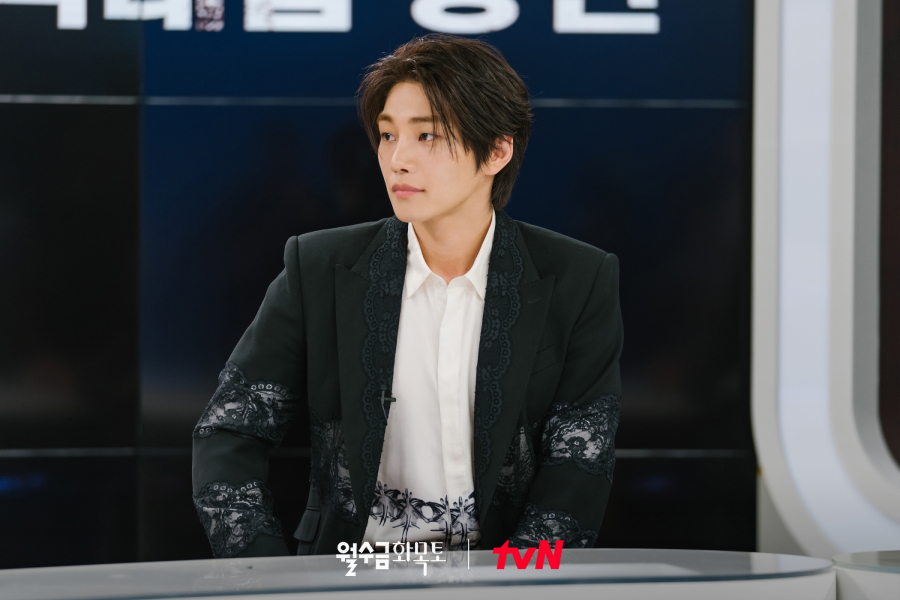 Kang Hae Jin (Kim Jae Young) doesn’t want to the world knowing that he’s the youngest son of Kang Jin Group, the same conglomerate that was pushing for their son to marry Sang Eun (called Jamie back then). A young Hae Jin happened to witness the sheer force of 18-year-old Sang Eun’s fury as she finally broke free of her family’s restraints and showed Kang Jin Group that she was no pushover. And he immediately fell in love. Who can blame him.

At present, Hae Jin is a top star who goes through girls like water and video calls his cat, whom he has also named after Jamie. He has never forgotten Jamie but is plagued with wondering how and where she’s living now. When he runs into her and Ji Ho in the elevator of the super exclusive apartment complex that he lives in, he is flabbergasted to find that not only is she married but that she seems to be hiding her identity from her husband. From then on, Hae Jin is hooked. He spies on Sang Eun when he can, wondering why she keeps taking off her wedding band and why Ji Ho doesn’t know her real name. But that spying inadvertently results in him witnessing Ji Ho’s strange behavior of re-enacting a stabbing. When he also finds pictures of one of the murder victims in Ji Ho’s possession, he decides that something is wrong.

For her part, Sang Eun doesn’t believe him and defends Ji Ho as if he were her husband in actuality, but she seems to have equally no clue of Hae Jin’s identity. The hijinks are about to take off here!

How refreshing is it to have a character who is gay but whose identity doesn’t solely consist of that in a drama! Woo Gwang Nam is Sang Eun’s ex-husband, her roommate, and her best friend. He deals with her drunk antics, wisely sees through to her pain, and calls her out on her massive crush on Ji Ho, all while having a social life and dreams and goals of his own. Gwang Nam is just plain awesome!

It’s Gwang Nam, not Sang Eun, who notices that something’s off when she keeps postponing telling Ji Ho that she’s retiring from her job and must break off their contract, or rather their marriage. Listening to her increasingly colorful excuses on why she’s delaying telling him, he points out that she’s well and truly wild about him. And to her horror, Sang Eun realizes that this just might be the case.

The best part is that we get a genuine exploration of his identity (at least in the first couple episodes) and how it’s affected his life. It’s not just the discrimination by his sisters bringing them together but the ongoing struggles he faces as a gay man. It’s such a joy to see him have an independent narrative that doesn’t fully center around Sang Eun. Hopefully we’ll see more of him and his love story! 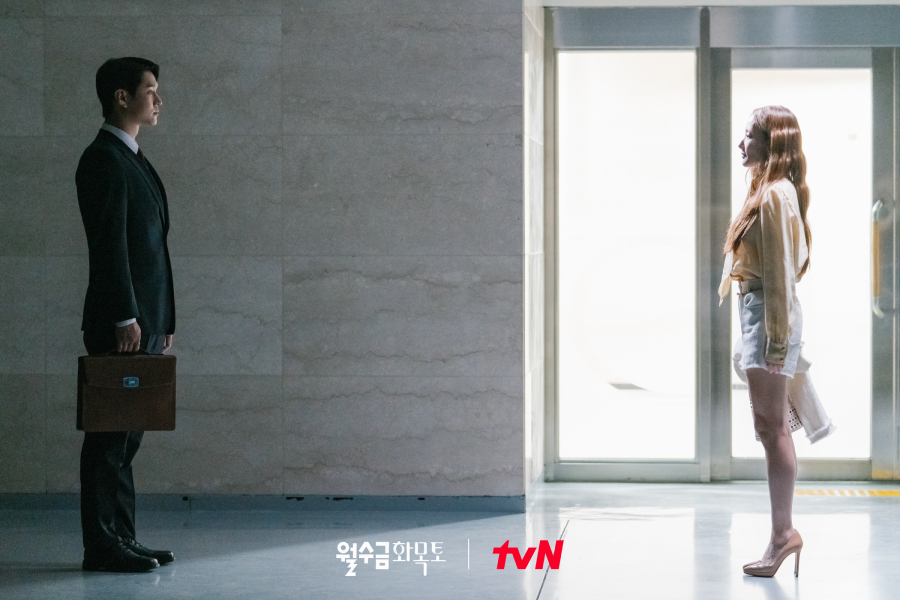 There’s something about this juxtaposition that just works. Him in the dark and her in the light is a classic spin, further compounded by the fact that they both have feelings for each other that neither has realized or is admitting. Ji Ho falls into the latter camp. He’s clearly affected by Sang Eun and seems to care a great deal about her. It’s enough for him to let her practically destroy his kitchen.

We still don’t know why he came to her in the first place or how or when he stared to care for her. But that hasn’t stopped Sang Eun from falling head over heels for him over five years. And like all good things, she doesn’t like it until it’s time to let him go. Suddenly their silences don’t seem so awkward but almost anticipatory. She relives moments that shook her heart, unaware that they did the same to him.

And when he dares to bring up divorcing first, she’s upset enough to demand fulfilling their contract for another month. In his eyes, he’s doing the right thing by letting her go now that she’s found her courage (interesting, does he know her from her previous life as Jamie?). But in her eyes, she can’t understand why he doesn’t seem to have any emotion over their long relationship ending. Add to that how deliciously taciturn and gruff Ji Ho is, and this is a match made in slow-burn heaven! He’s the quiet, almost stern man who’s emotionally constipated, and she’s the social butterfly with a painful past who has every intention of seeing the best in him, even if he doesn’t see it in himself. Again, it’s a match made in heaven!

But Sang Eun’s fierce inner strength doesn’t mean she can’t get hurt. When Ji Ho rebuffs her attempts to ask what she should tell a much-too-curious Kang Hae Jin, she’s hurt when he tells her to just tell Hae Jin the truth and that they’ll soon be nothing to each other. So, when Hae Jin bursts in with his well-meaning warning that her husband could be a serial killer, Sang Eun’s about to give up on Ji Ho and tell Hae Jin the truth when Ji Ho sticks his head out of his apartment and we get this wonderful moment.

Who can blame her for freaking out when Mr. Strong and Silent calls you “honey”?

And just like that we’re off to a rollicking start to what is sure to be a very interesting romance. The premiere episodes cover so much ground that I hope this show doesn’t start to flag in the later episodes. But thus far, this is a solid opening to what could be a fantastic drama!

Hae Jin’s role here seems to be that of an interloper in Sang Eun and Ji Ho’s romance, not just as another potential love interest, but as a reminder of Sang Eun’s past and as someone who’s trying to convince her that her husband is dangerous. Here’s hoping that Sang Eun doesn’t waver and stays in Ji Ho’s camp! The man needs someone on his side on this wild ride, and so does she!

Currently Watching:  “If You Wish Upon Me,” “Love In Contract,” “Blind,” “May It Please The Court,” and “Little Women.”
Looking Forward to: “Island,” “Queen of the Scene,” “One Dollar Lawyer,” “Black Knight,” and of course, Ji Sung’s next drama.