“Love in Contract” returns with a stellar pair of episodes that focus on how easy it is to not know one’s true feelings. Denial is the name of the game this week as our favorite characters struggle to reconcile the person they are with their seemingly inexplicable longings and decisions. It just goes to show that being an adult doesn’t mean you have all the answers! Here’s what we loved and got a little anxious over in this week’s episodes! 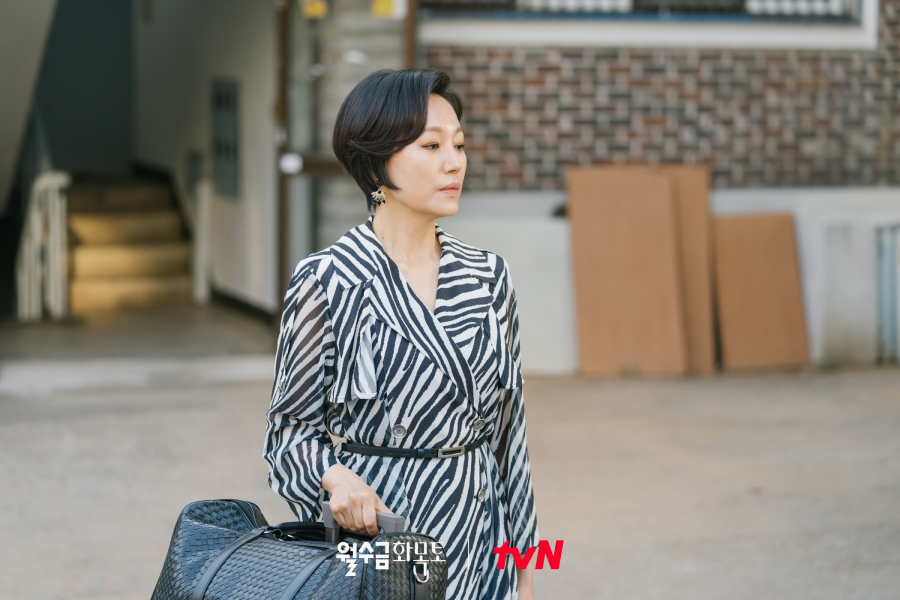 Choi Sang Eun (Park Min Young) doesn’t seem to realize that she has some deep-seated mother issues when it comes to Yoo Mi Ho (Jin Kyung). For all her supposed hatred for the woman who raised her with high standards, Sang Eun goes practically bankrupt to bail her out of jail and compounds it by having Mi Ho live with her and Woo Gwang Nam (Kang Hyung Suk). 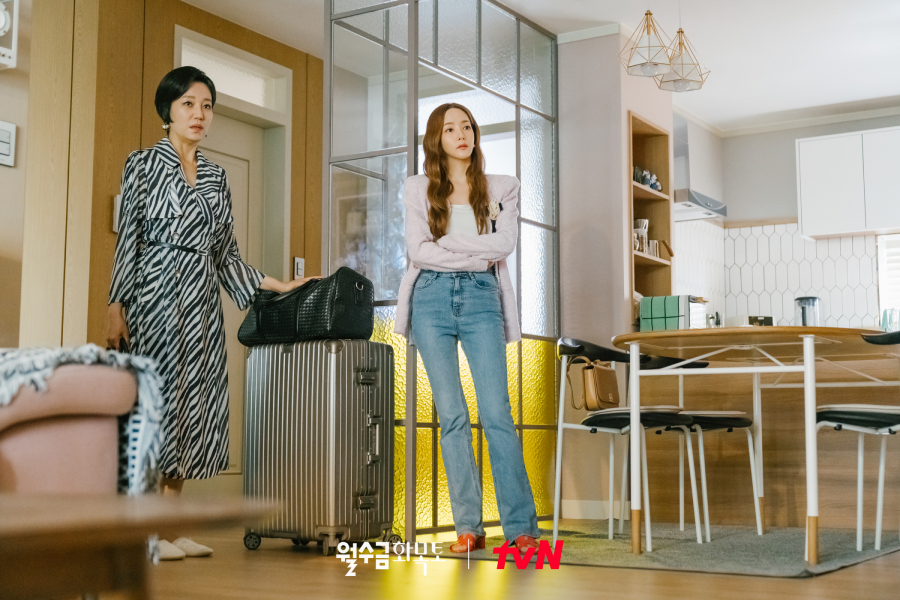 They’re both as stubborn as the other though because Mi Ho refuses to acknowledge that she equally cares for Sang Eun beyond her role as Ina Group’s butler. But rather than acknowledge that, both women play a game of denial, acting like they’re in competition to see who can hurt each other more. And they say wisdom comes with age! Gwang Nam is the only one who sees through Sang Eun and wonders why on earth she’s bringing her unresolved mommy issues home where she has to see them everyday. But of course, he gets roped into everything when Sang Eun announces him as her husband and Mi Ho makes him her butler. 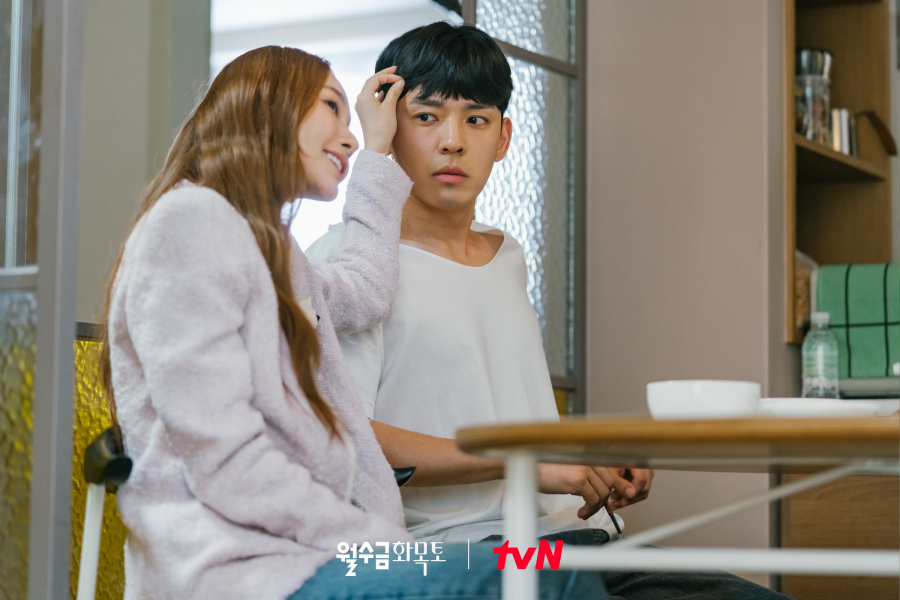 This would all be hilarious, but living with a dragon means having to watch for flames. And while Sang Eun seems to think that Mi Ho is down and out of the battle after having had to rely on Sang Eun for bail money as well as room and board, it’s far from the truth. She’s already back at Ina Group trying to negotiate something with Sang Eun’s parents. And given that Sang Eun is not being clued into what it is, that cannot bode well.

Ah, Kang Hae Jin (Kim Jae Young). Here we go again. Despite being furiously rebuked by Sang Eun for forcing her to do a photo op with the press against her will, Hae Jin has no plans to stop forcing her to doing what he wants. Oh boy. Sang Eun correctly pinpoints that he must be so used to women falling at his feet that he expected her to jump at the chance to be his fake fiancée. Still, having a soft heart, she sees something of the person she used to be in Hae Jin. 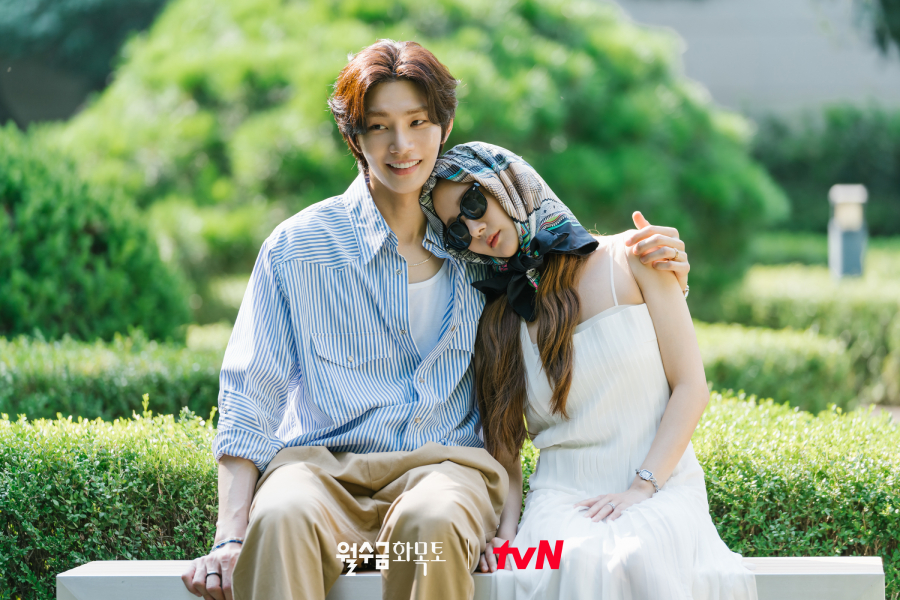 The truth is that they are alike in different ways. He knows the truth of her past, and she understands his desire to get out of an arranged marriage. They have both used their looks to survive and admit that they’re pretty vain at times. But it’s pretty obvious that she isn’t feeling anything romantic towards him. But of course, Hae Jin doesn’t care about that. In classic form, he announces to his agency head that he will be marrying Sang Eun soon. Why? Because he can. Has he asked her about her opinion of this? Nope. Is he aware that she has no romantic interest in him? Yes, but he thinks he can change that. Yikes. Talk about red flags everywhere. 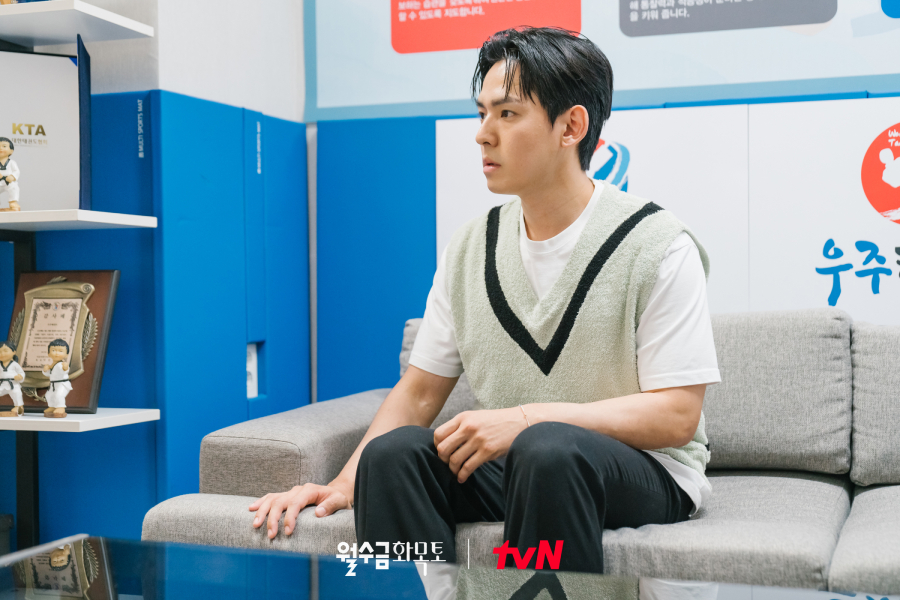 Gwang Nam continues to get his own storyline, which is absolutely lovely. Despite having quit as a taekwondo instructor back when he believed he and Sang Eun would be going to Canada, he returns upon requiring a job. But he finds that a female student whom he politely rejected has been going around spreading rumors that he’s gay. The other instructors insist that they don’t believe her and that it’s because she’s put out at his rejection (sounds like she’s a little psychopath in the making). They swear up and down that their loyalty comes first. It’s devastating because you can see how badly Gwang Nam wants to believe that. So he takes a leap of faith and admits that the rumors are true and he is gay. And he sees everyone’s face change and turn ugly. There’s the most awkward of pauses because he smiles and says it’s just best that he leaves, and he does so. 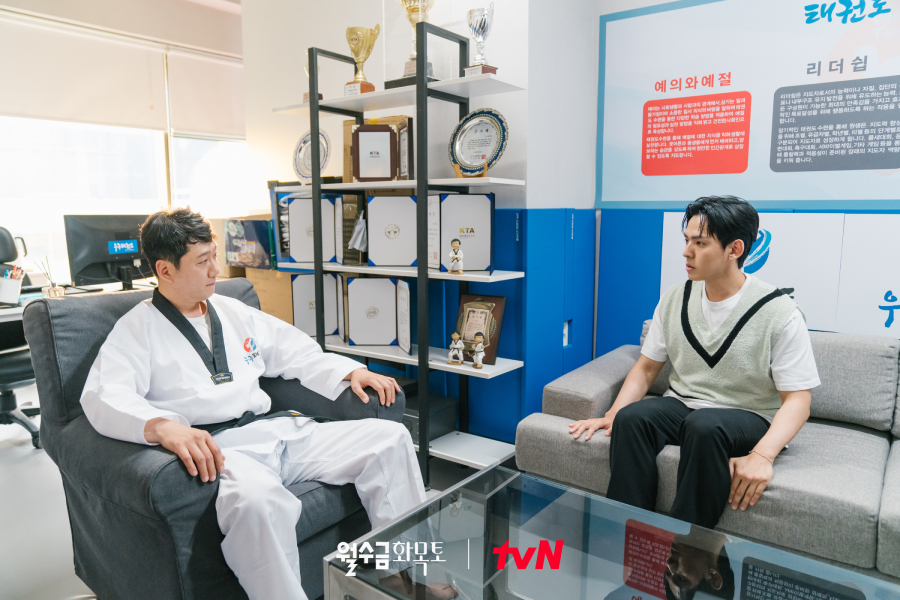 It’s ridiculous because the gender of one’s partner has no relevance to whether or not they do a good job, and Gwang Nam clearly did a fantastic job all these years. But prejudice is prejudice, and Gwang Nam continues to face a boatload. It’s just painful.

Jung Ji Ho (Go Kyung Pyo) remains a blast. Like Sang Eun, he genuinely doesn’t understand that what he’s feeling goes beyond “goodwill” but extends to genuine affection. From chasing Sang Eun down after he inadvertently says something that makes it seem like he felt sorry for Sang Eun this whole time to chasing his coach Kim Sung Mi (Bae Hae Sun) down to ask her about his own feelings (poor guy haha), Ji Ho is doing a lot of soul-searching this week. It’s confusing his nice, tidy life in ways he genuinely doesn’t understand. 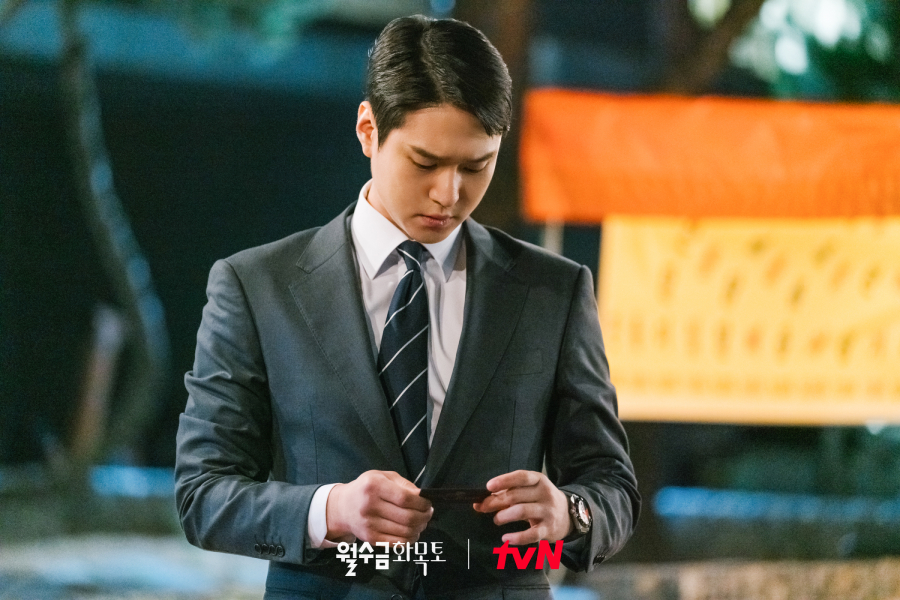 For a man who barely gets any human connection, he’s suddenly getting a lot of attention. His coworkers and superiors want to have that housewarming at his place or die trying (despite how intrusive that is), and Ji Ho finally has no choice but to beg Sang Eun for help. She’s still hurt and under the impression that he hired her for five years because he felt sorry for her, but after some begging, they end up going shopping to remake his bachelor’s pad into a couple’s haven. And oh boy, is it hilarious.

Ji Ho finally realizes just what men find so exhausting about shopping as they go from store to store to store, picking up all sorts of goods he genuinely doesn’t understand the purpose of. He’s trying to save on house slippers by buying 20 at once, and she’s trying to make his home worthy of a judge’s income. It’s endearing just how lost he is. But the best part without a doubt is the photo studio session where they have to create five years worth of photo memories. And for the first time, staid Ji Ho loosens up a smile that seems almost comfortable. These two are too cute.

But what would a not-date date in dramaland be without some anxiety thrown in? Because both of them are still keeping secrets from each other. On the drive back, Sang Eun tries to come up with answers for common questions they’ll be asked at the gathering, and they touch on the topic of parents. Sang Eun is quick to assert that she has no parents while Ji Ho does the same. They both congratulate each other on growing up well, but given the matter of the man waiting outside the courthouse for Ji Ho sometime ago who mentioned family, Ji Ho seems to be lying. Unless, knowing him, he’s referring to having no biological family.

But the night isn’t over yet, and before departing, Ji Ho seriously gives Sang Eun a major truth about himself. As they discuss first loves, Ji Ho reciprocates Sang Eun sharing the “truth” about her parents by saying that he had a first love and that he married her. And then he just leaves. To him, that’s all that needs to be said, but to Sang Eun, it’s a blow to the heart, and it’s a reminder that she doesn’t know him all that well after all. It’s also proof that Ji Ho is capable of love. If only she knew that he has had his heart badly broken.

Ji Ho reveals little about his ex-wife, but two things are clear. First: he won’t badmouth her because he truly believes himself at fault in some way for the end of their marriage. Second: he was cheated on. The horror on Ji Ho’s face as he spots her flirting at a bar with some prosecutor during their marriage is devastating. And it’s also proof that Sang Eun’s profession could eventually trigger him as he realizes the depth of his emotional attachment. Now there’s a time bomb waiting to explode.

At episode 6, we’re in just the right place for a kiss, and it thankfully arrives right on schedule! The dreaded housewarming party finally arrives, and Ji Ho is left bewildered by the transformation of his home when he arrives with his colleagues. They are ridiculously nosy, down to taking pictures in Ji Ho’s bedroom (why?), but dinner is a smooth affair. Sang Eun does a great job of keeping everyone entertained, and had it all progressed normally and everyone gone home afterwards, this night would have been quite the success. Alas, Ji Ho’s superiors propose a talent show where whoever wins gets money. This is a terrible idea because Sang Eun is so determined to play the hostess (and unaware that she’s also trying to show off to make Ji Ho swoon) and upstages everyone. Drinking? She’ll be his white knight and down shots. Bellydancing? As one coworker performs, Sang Eun battles it out with her. It just never ends. And when at the end, the money ends up going to someone who’s not Sang Eun, a clueless Ji Ho vociferously objects that Sang Eun was clearly the better performer and breaks every social dinner rule in the process. Oh dear. So when his superior decides to play spin-the-bottle (I’m starting to think that it’s Ji Ho’s workplace that’s the issue, not him), and Ji Ho objects to such nonsense, a very drunk Sang Eun’s bright idea is to shut him up. And here we go!

She doesn’t remember any of it the next day despite having even fallen asleep at Ji Ho’s place. Ridiculously hungover, she runs for her next appointment with Hae Jin but falls asleep on his shoulder. He thinks that this is a sign that she’s into him, but she’s reliving that kiss with Ji Ho and panicking. Meanwhile, a perturbed Ji Ho watches both of them because it’s more than about time for him to make his move. 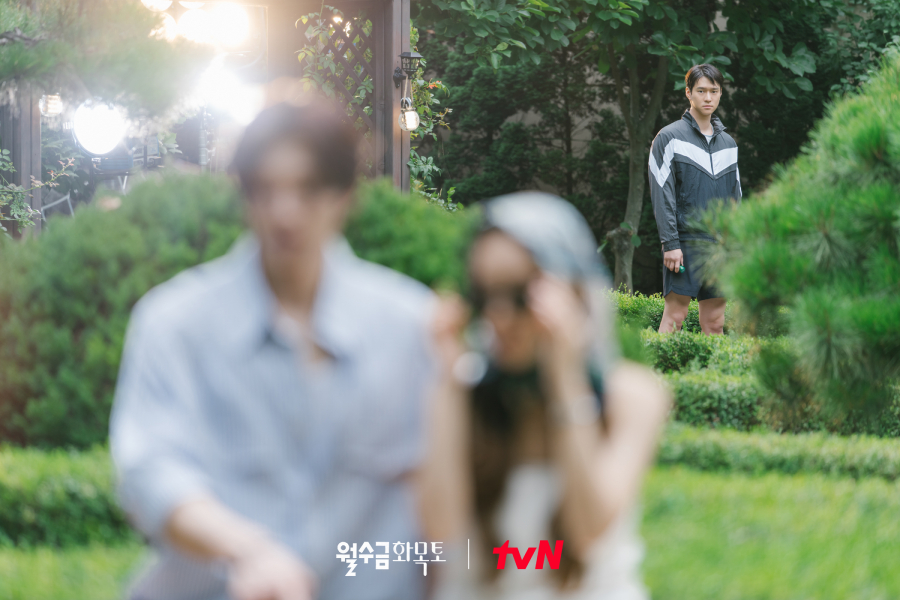 Looks like everyone’s now in position for our love triangle! But what will the fallout from that kiss be? Wednesday needs to come faster!