“Love in Contract” delves deeper into its characters’ psyches as we finally get some much-needed insight into just what goes through the minds of our two leading men. Kang Hae Jin (Kim Jae Young) comes alive this week as the youngest son of a conglomerate group with no real agency of his own, while Jung Ji Ho (Go Kyung Pyo) discovers that he has more agency than he thinks.

1. Ji Ho admitting that he remembers everything

Ji Ho’s relationship with Choi Sang Eun (Park Min Young) has been one step forward and three steps back all the way. They’re both commitment-shy for very different reasons: him, being divorced, and her, being unsure if this attraction is mutual or perhaps just him depending on her for her social skills. But we discover that there’s even more to Ji Ho’s reticence than we thought. He has always been the way he is, blurting out the truth (no matter how awkward), but his upbringing made things drastically worse. A child eager to not step on any toes after his aunt took him in upon his father’s death, Ji Ho only wanted to be liked. Being told that there’s nothing he can do and that the very person he is isn’t likable is a quick way to turn a child inward and make them believe that there’s something wrong with them. And sadly, that is exactly what Ji Ho internalized and what his subsequent divorce made worse.

For a moment there, it seems like he’s about to let Sang Eun shy away after her kiss. But upon being half-awake when she swoons over him (thinking that he’s asleep) he takes a leap and decides to open up in the most Ji Ho-like way possible. And it’s adorable.

He confesses that he was afraid to acknowledge what was between them out of fear that she would stop coming over, and Sang Eun nearly melts. This is such a big step, especially for a man who has constantly heard that he is unwanted, to try and open himself up to being rejected again. And despite knowing none of his past, Sang Eun sees the effort and loves him for it as much as we do.

Ji Ho is certain that he’s confessed in the above scene but is quickly brought to reality after his anonymous office bulletin board tells him he has done nothing of the sort. In fact, Sang Eun is under the impression that she’s the only one who confessed and tells him not to worry and that she won’t burden him with her feelings. But he really wants her to! When she suggests a bit of role-playing for their next dinner date where they’ll be longtime friends of 20 years, he’s all for it. But he adorably cannot seem to speak to her informally and slips back into formal language, while she swoons at him speaking informally. And who can blame her? Everything is hot in that deep voice of his.

Meanwhile, things aren’t going too well in Sang Eun’s life. Her former family at Ina Group has found that she’s in Korea and trying to partner with businesses who are partners with them. They’re determined to run her out of the country because she’s a failed product to them. Sang Eun ruefully asks Ji Ho whether she should go abroad. She jokes that she won’t if he says not to, but there’s an undercurrent of seriousness there. And perhaps that’s why Ji Ho says just that.

It’s lovely to see them bonding and being themselves without worrying about external pressure. Sang Eun even dresses down for the date, and he doesn’t care one bit. She once mentioned that her ideal partner would be one who loved her even without makeup (without the persona she puts on, really), and it’s unclear if she realizes that he has always been doing that. But as far as personas go, she isn’t the only one wearing a mask. Hae Jin’s lies are catching up to him big time. And this time, he may not be the only one who goes under. 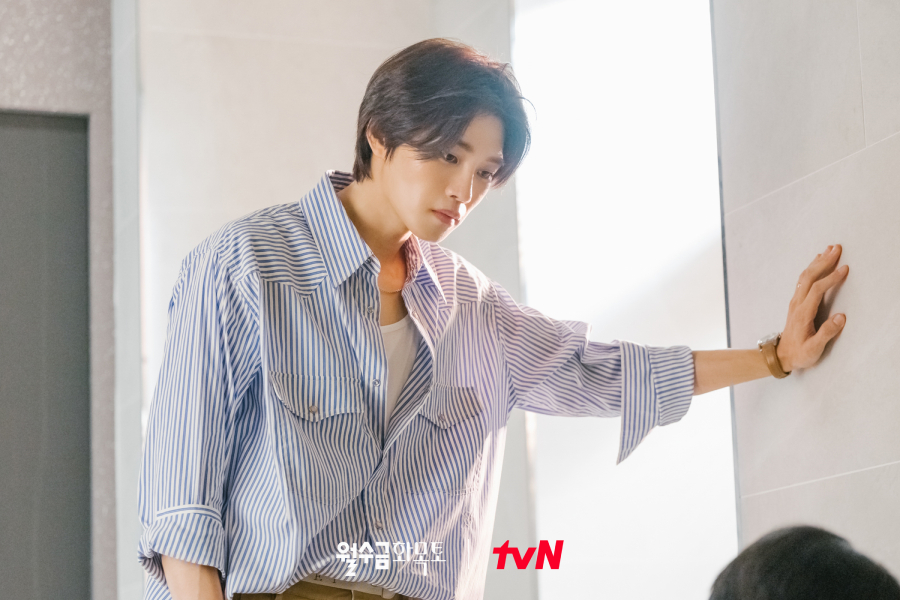 We finally dive deeper into Hae Jin’s psyche, and it’s enough to make him quite pitiful. Despite growing up in the lap of luxury, he’s cynical beyond his years after seeing his mother scheme her way into marrying his father by using him as collateral, not to mention the fact that all his half-brothers see him as a threat. Hae Jin wants nothing to do with conglomerate life and has tried to prove to his family and his brothers that he is no threat and has built something of his own. But they keep trying to drag him back into the fold.

Part of Sang Eun’s allure to Hae Jin is that she’s managed to leave a life that he has been trying to ditch for years. And she left it without looking back once. He admires that and keeps trying to replicate it, but unlike her, he knows that his mother will be torn apart by the rest of the family if he goes no-contact. Torn between duty and a yearning to live life the way he wants, Sang Eun feels like an oasis in the desert to Hae Jin. So when she finds him sick at heart and physically ill, and she takes care of him, he’s just smitten and makes a move. She brushes it off as just flirting but it only makes him more determined to have her. He seems to think that having her can fix his life for some reason without realizing that it’s a temporary Band-Aid on a problem that won’t go away without him making a difficult decision.

4. Ji Ho asking for an explanation 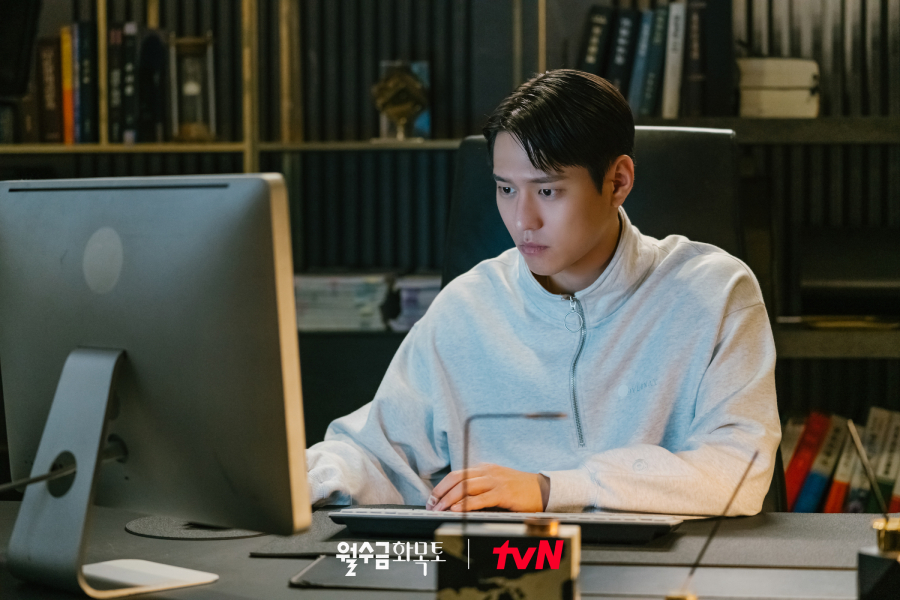 I love mature heroes, and Ji Ho proves himself to be just that. After his wonderful casual-talking date with Sang Eun, he’s dismayed to see paparazzi photos of her at a hotel with Hae Jin. In reality, this is because she found him sick in the garage, and he couldn’t return to his room because his mother could barge in at any given moment. So Sang Eun took him to a hotel. However, Ji Ho doesn’t know any of this, and given his history with women cheating on him, he can’t help but wonder if Sang Eun is doing the same. 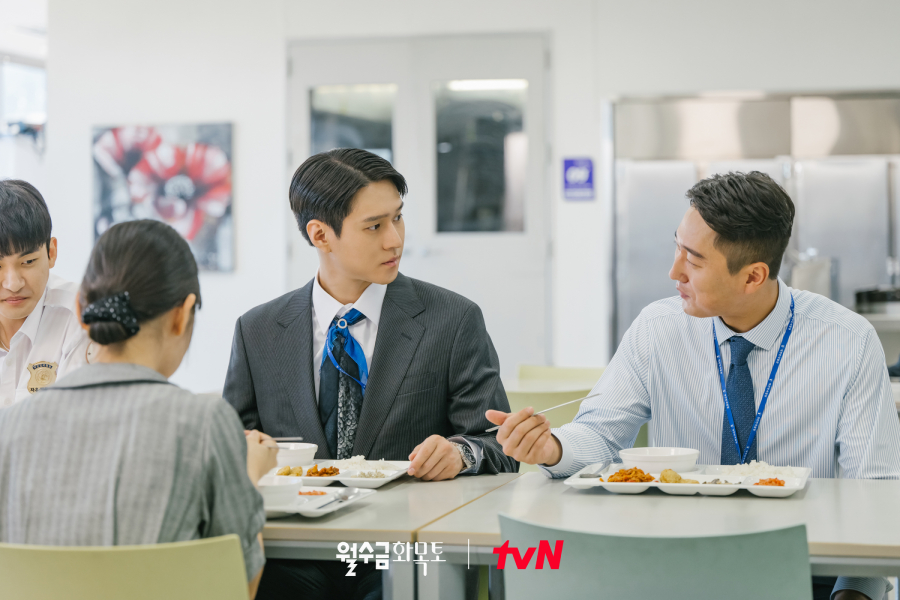 Yet, he’s chastened after hearing one of his colleagues note that men who internalize everything like that just tend to spin wheels in their own heads, jumping to conclusions and imagining the worst instead of just talking it out with the other party (yes!). Ji Ho is huffy at first, but takes the advice to heart and calls Sang Eun to point-blank request if he can have an explanation. And the way he does it is so swoon-worthy too. It’s extremely polite and ridiculously formal. Very Ji Ho. She’s both bewildered and happy to explain as well as just plain confused when he says he’s on his way to pick her up. She races back to inform Hae Jin, but that’s when she meets his new corporate lawyer Jung Ji Eun (Lee Joo Bin). And the final piece of the puzzle sinks into place. 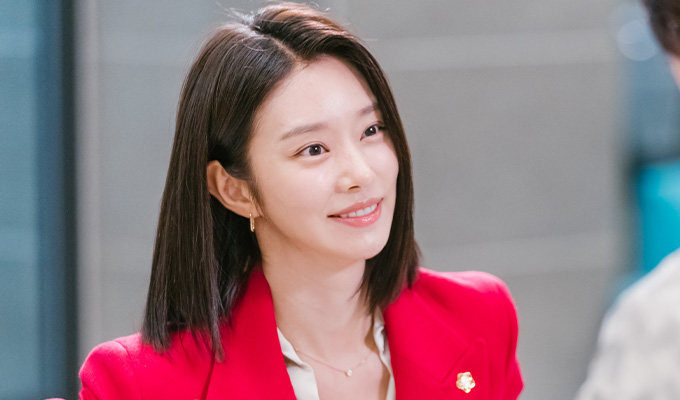 I was sort of hoping we wouldn’t go here because it does complicate matters greatly and could trigger Ji Ho and result in him undoing much of the good work he’s done so far. But Jung Ji Eun, who broke Ji Ho’s heart, is back, and she’s Hae Jin’s lawyer to boot so all four of our main characters are going to be seeing a lot of each other. It’s the worst way for Sang Eun to meet her too. Seconds after being introduced by Hae Jin as the girl he’s going to marry, she’s about to be swept away by Ji Ho. 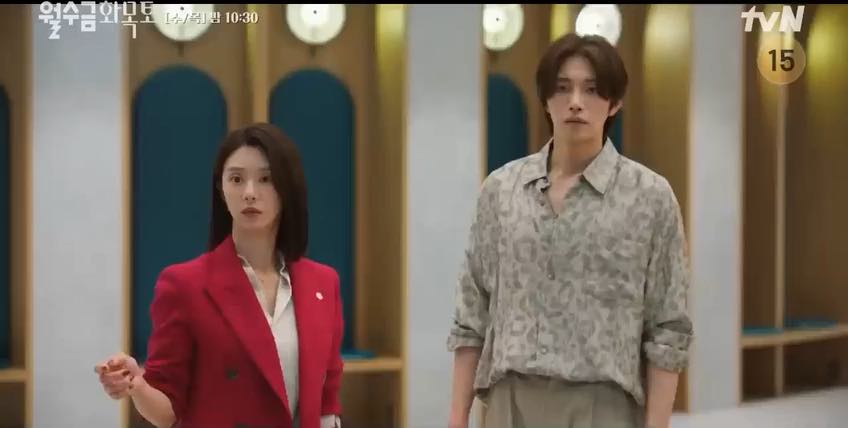 It doesn’t look good for anyone involved. The more people involved in a secret, the less it stays a secret. And it isn’t clear whether Ji Eun has any intention of keeping her lips sealed. The deception is already fraying at the seams, and should it explode, the casualties will be beyond bearing. Sang Eun will end up looking like the worst: a two-timer who uses men for money. Hae Jin could get away with it as a playboy actor. But Ji Ho would be a laughingstock at work, especially if Sang Eun tells the truth that she worked as a contract wife for him. Things are getting shaky, and next week promises even more shenanigans as our three parties get used to having a fourth around. 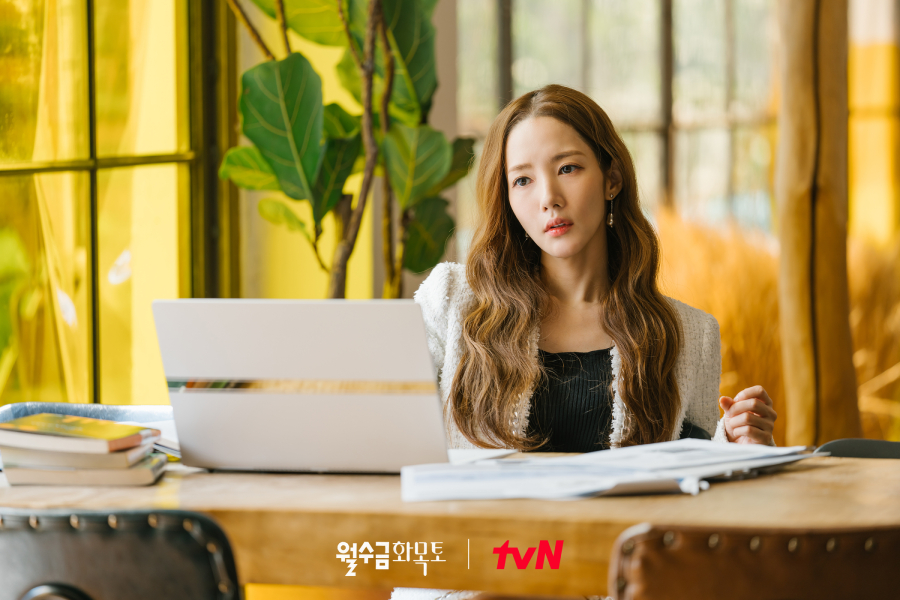 Here’s hoping that Ji Ho and Sang Eun lean on each other during this whirlwind. These two are so wary around each other and for such different reasons. Their childhoods have warped them in different ways. She covers everything with a smile, and he retreats inside and blows things out of proportion internally. And they both notice when the other does it and pulls them right out of it. It’s meant to be. Now, let’s hope it goes that way!

Currently Watching:  “Love in Contract,” “Blind,” “Gaus Electronics,” “The Queen’s Umbrella,” “One Dollar Lawyer,” and “May It Please The Court.”
Looking Forward to: “Island,” “Queen of the Scene,” “Black Knight,” and, of course, Ji Sung’s next drama.