V Describes How BTS Shows Support For Each Other’s Solo Work, What Music And Happiness Mean To Him, And More

BTS’s V has recently teamed up with Vogue Korea for a mystical pictorial!

In his accompanying interview, V shared his take on why the world needs music, saying, “I think music helps us all breathe. I don’t think I would want to live if music was taken out of my life. I believe it’s music that amplifies all emotions, including comfort, fun, and feeling touched, in all patterns of my life, such as when I’m going to work, working, leaving work, and eating.”

Responding to the interviewer’s comment that they had discovered a new song because of him, V commented, “I learned of Choi Baek Ho’s ‘End of the Sea’ through Park Hyo Shin and I feel good that you discovered it through me. I hope it gave you comfort.” 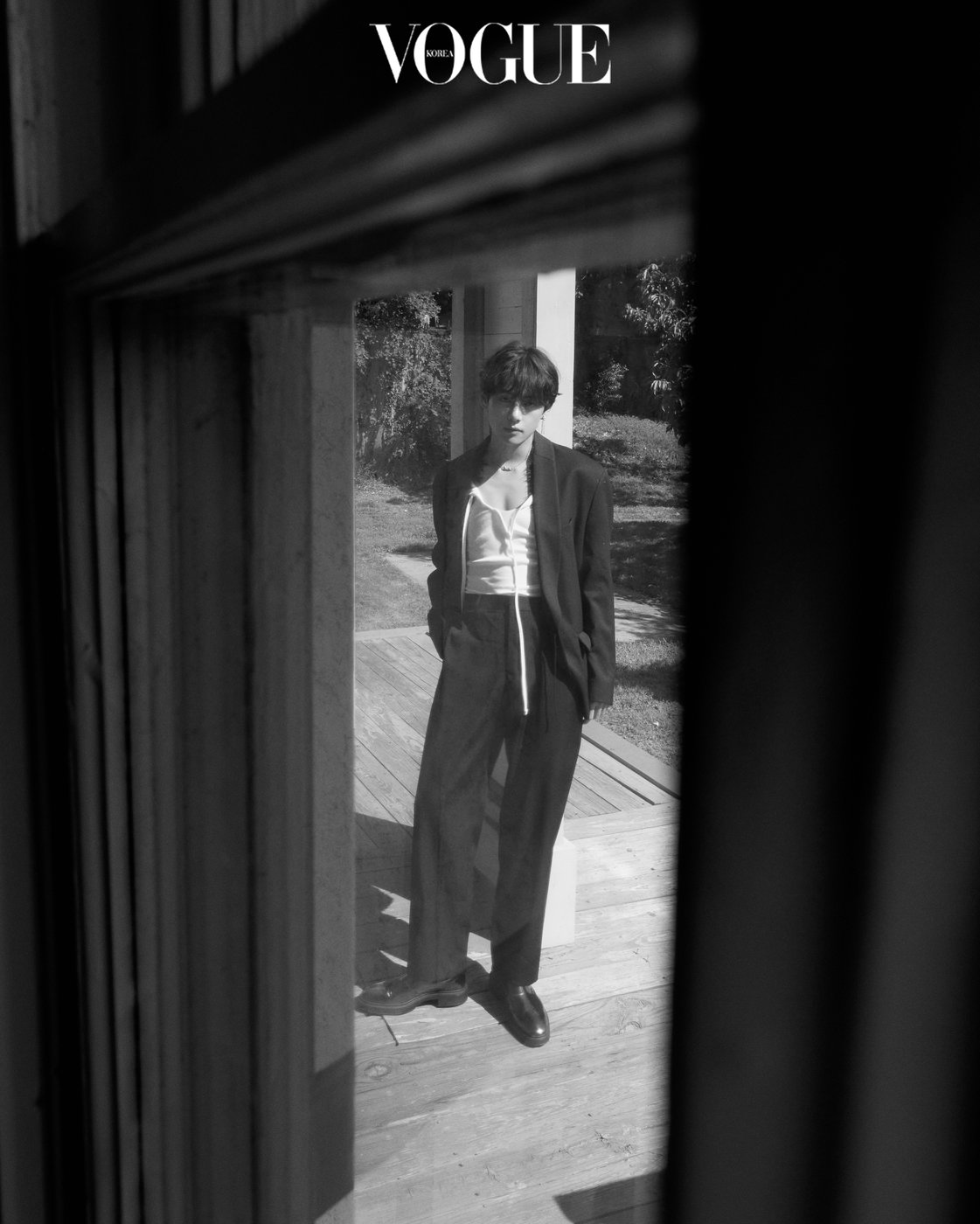 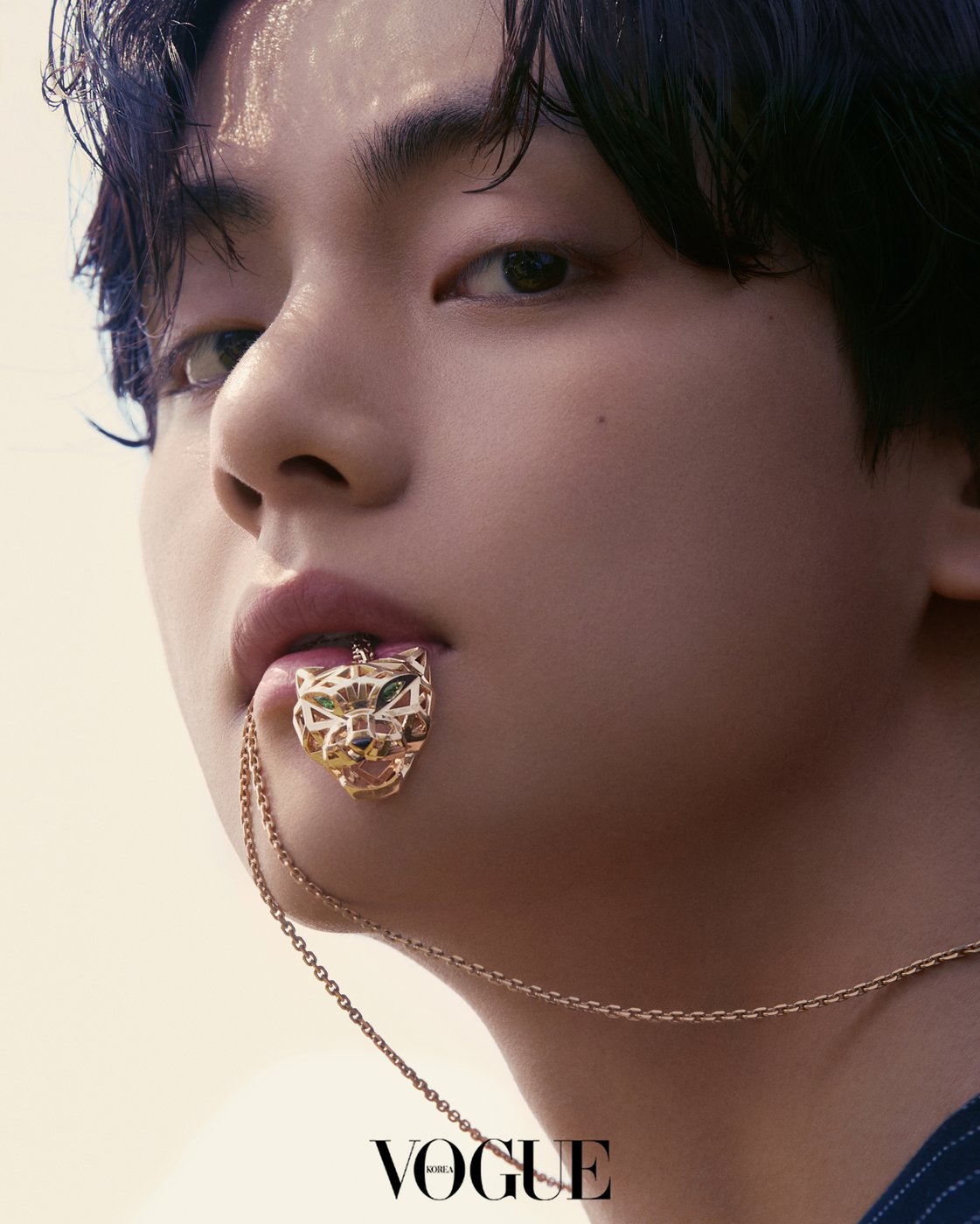 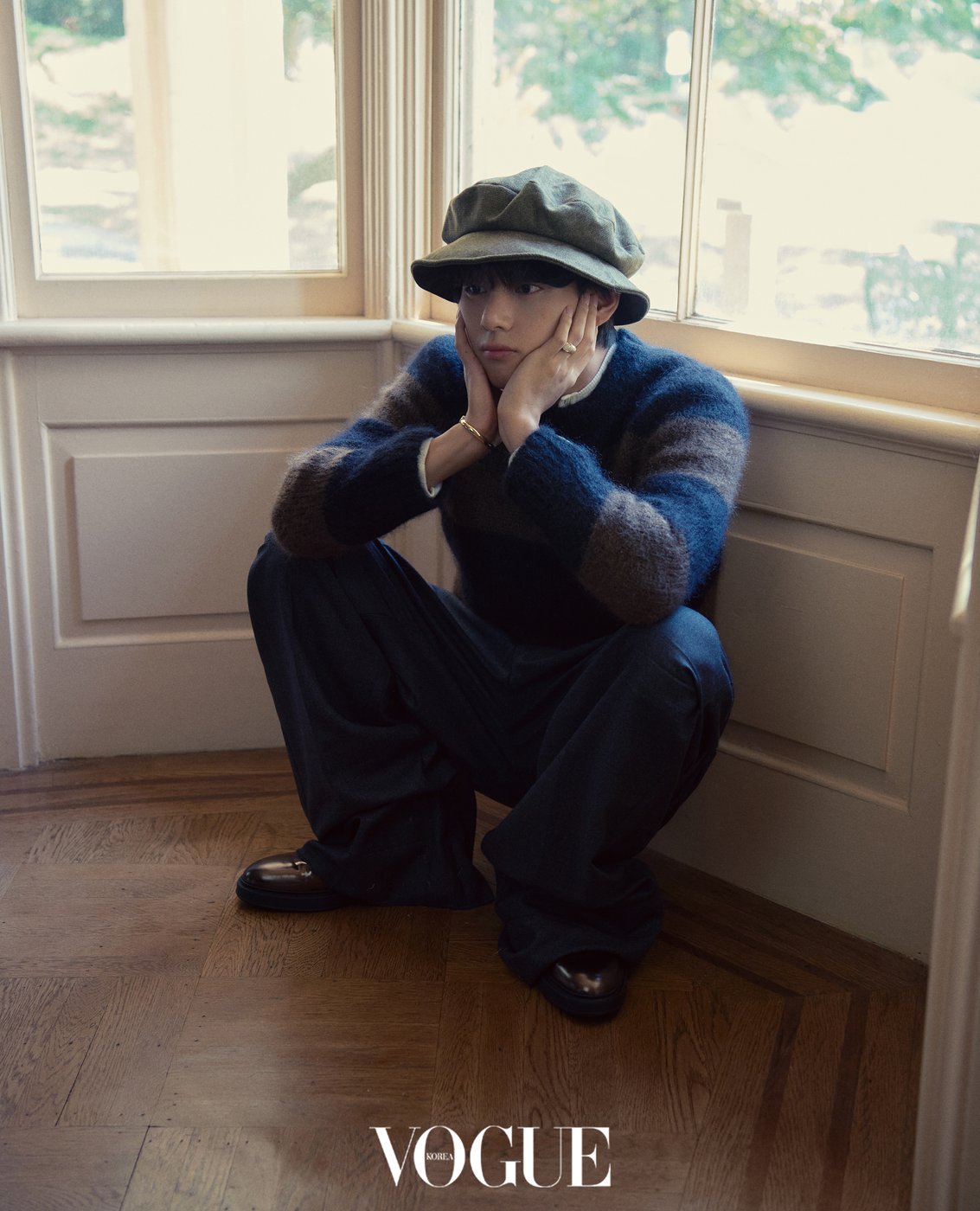 The interviewer added that despite all the uncertainties in life, V reminds them of the famous phrase “Keep Calm and Carry On.” When asked whether he’s the type to maintain a calm composure in unpredictable situations, V replied, “Even if I look at ease, I’m honestly not. I just act like it.”

He elaborated, “Instead, I’ve come to learn how to think straightforwardly. Even if my thoughts are not the correct answer, I act with confidence that those thoughts are the best I can do. It’s not that there is no pressure, but I do not regret my actions. If it’s for the people I love, I believe I have to behave well. Even when I’m hurt or struggling, thanks to ARMY [BTS’s fan club], BTS, my family, and my friends, I am healthy and happy.”

V is a well-known social butterfly with many celebrity friends, of which he commented, “I’m the type to cherish my relationships with others. I originally like people and I think all artists, directors, writers, and reporters are precious. In the past, I did get hurt and start to shy away from people only viewing me as V or as a connection, but I still like people. The people around me now are the precious people who have made me who I am today.” 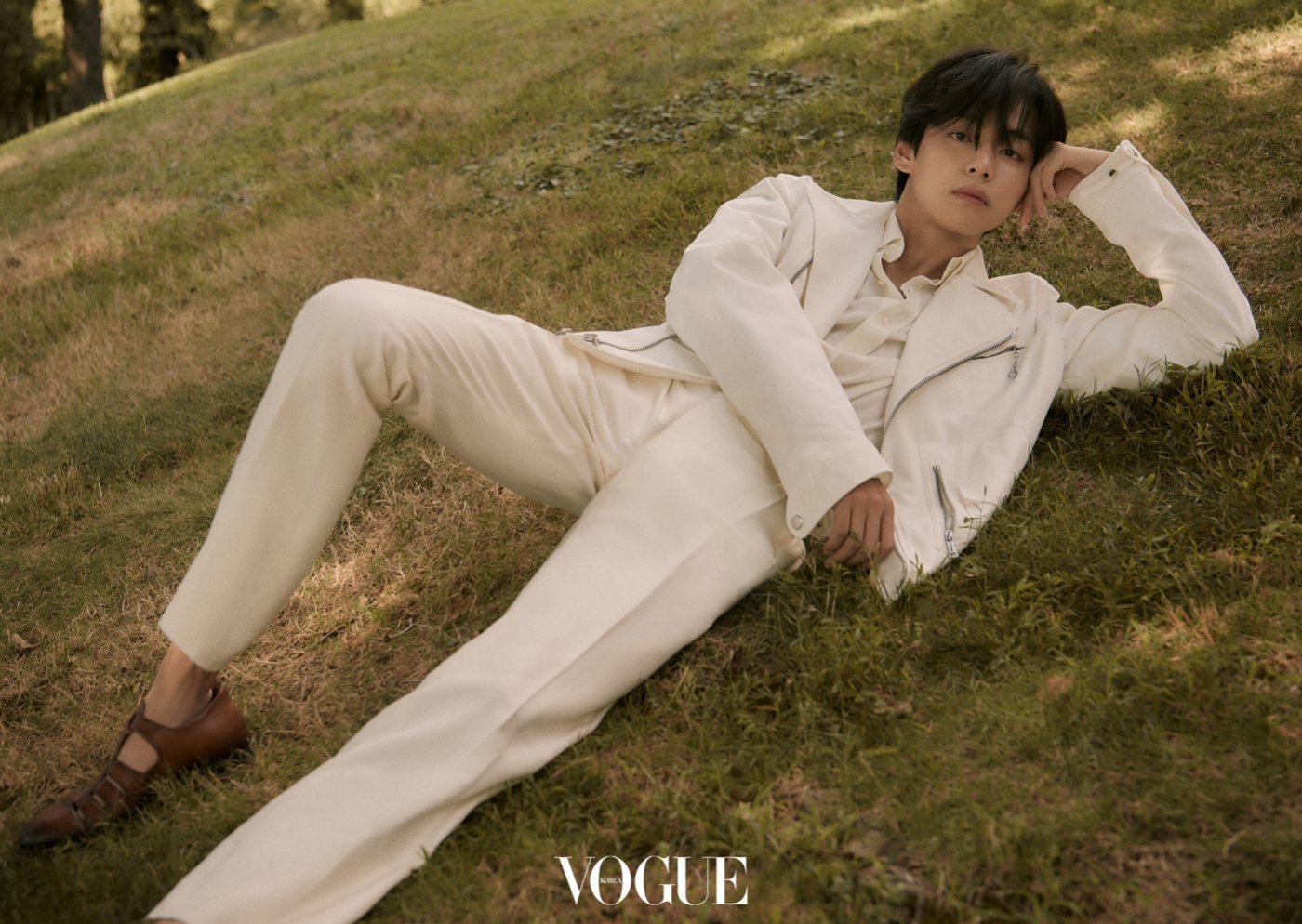 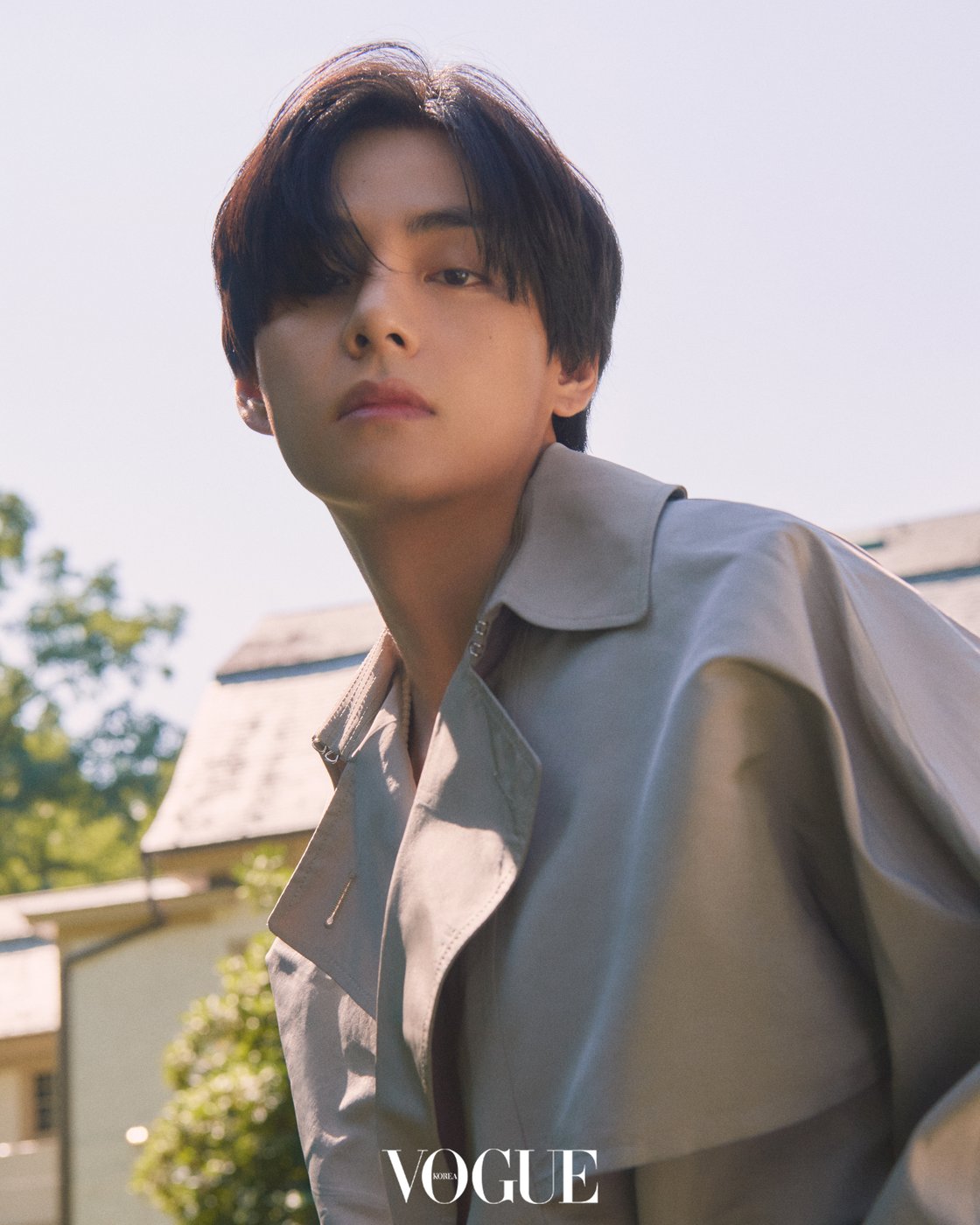 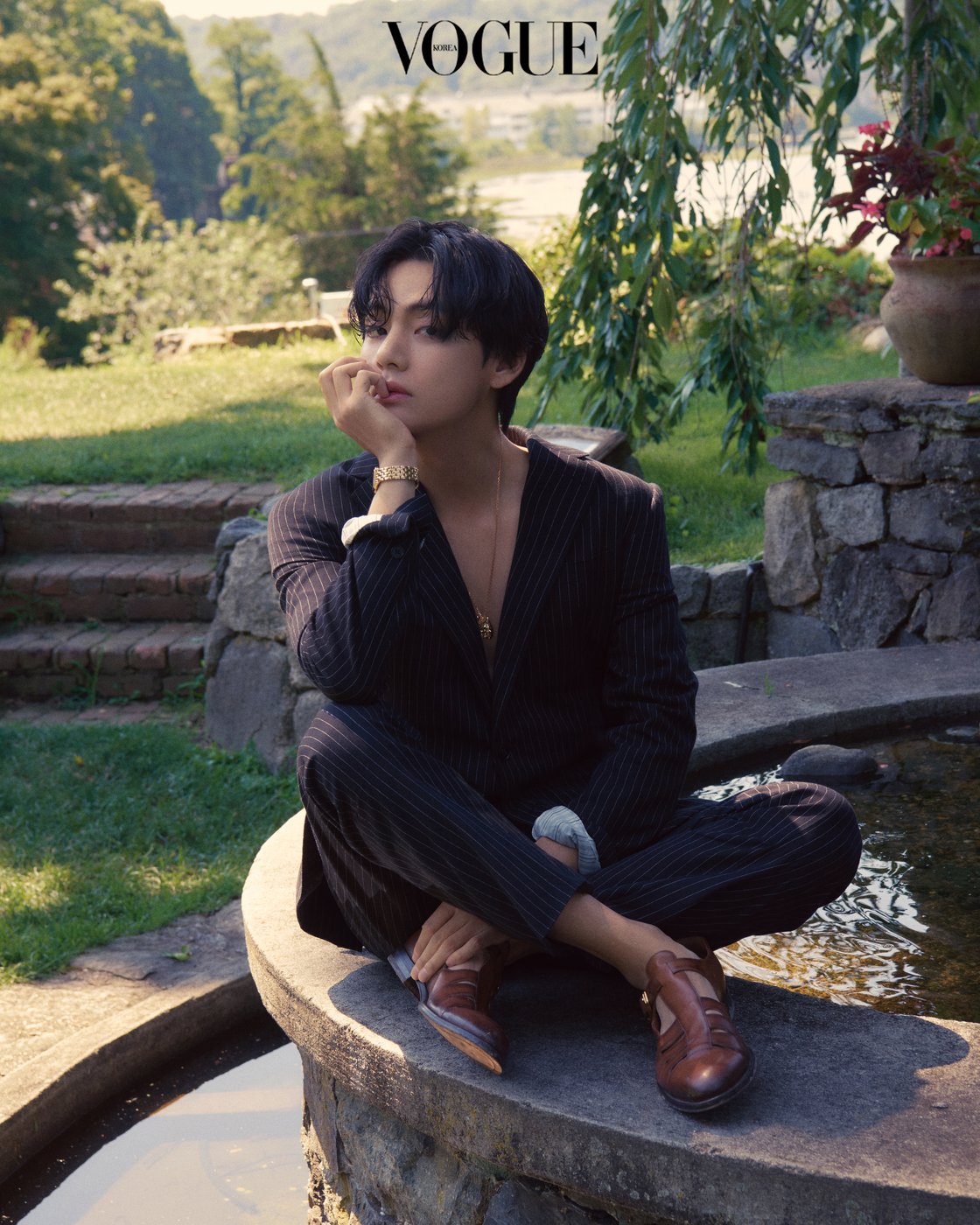 An assumed difficulty about being a celebrity is the perceptions people project onto you and V was asked if his identity was something he struggled with. He gave a short and sweet answer, saying, “V is another one of me and one of my many personas.”

In the past, V detailed his fears about whether fans would continue to like him if they didn’t see him for longer periods of time. He shared his current thoughts on this, commenting, “Recently, it’s gotten better because we’ve been promoting and doing concerts, but if there comes another period where I can’t see my fans, it will be hard. I want to promote consistently, but there’s the physical aspect…It’s regretful that I don’t think I’m able to meet fans as much as I feel determined to. However, I’m always working hard so that I can show my best when I do get the opportunity to meet fans.” 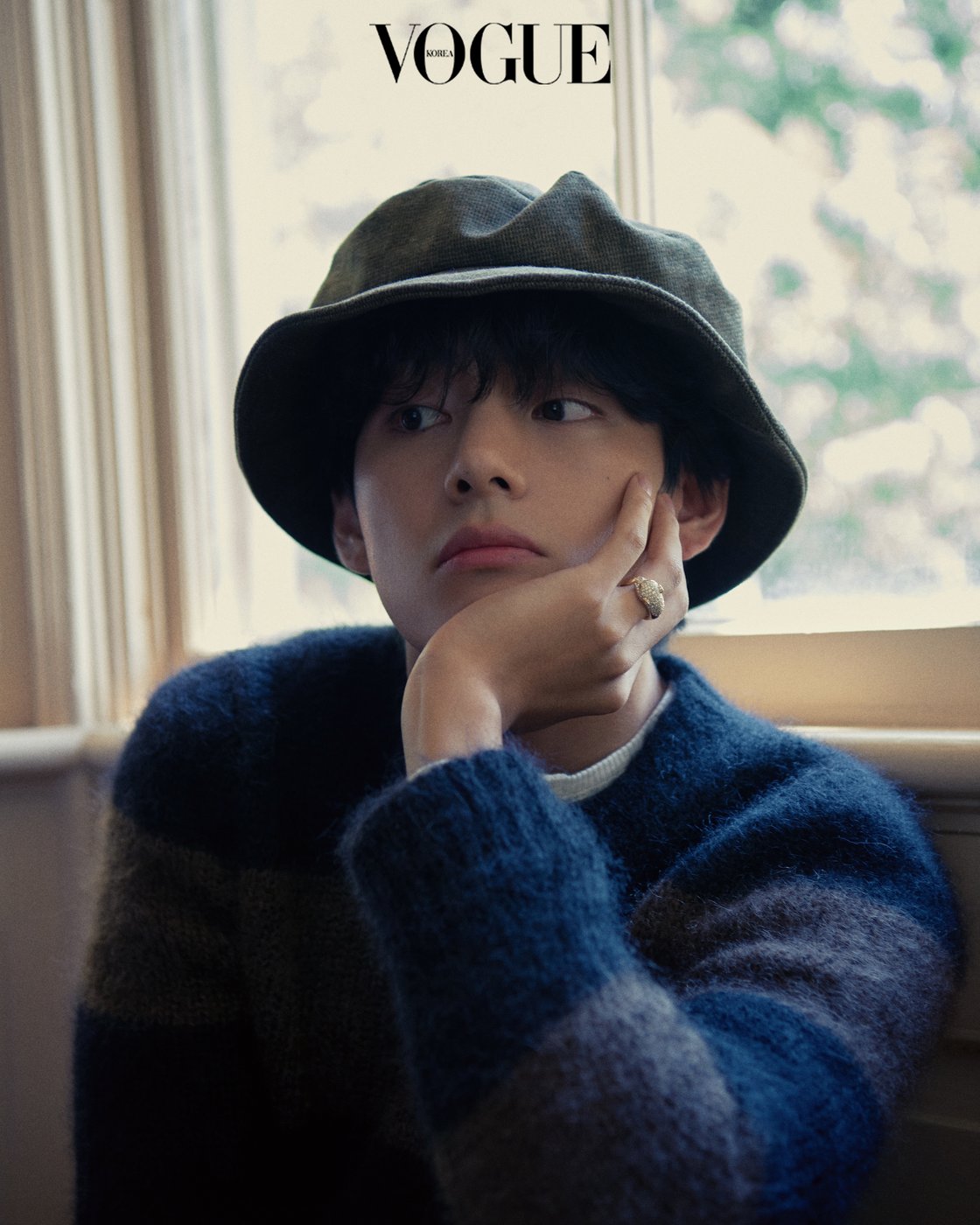 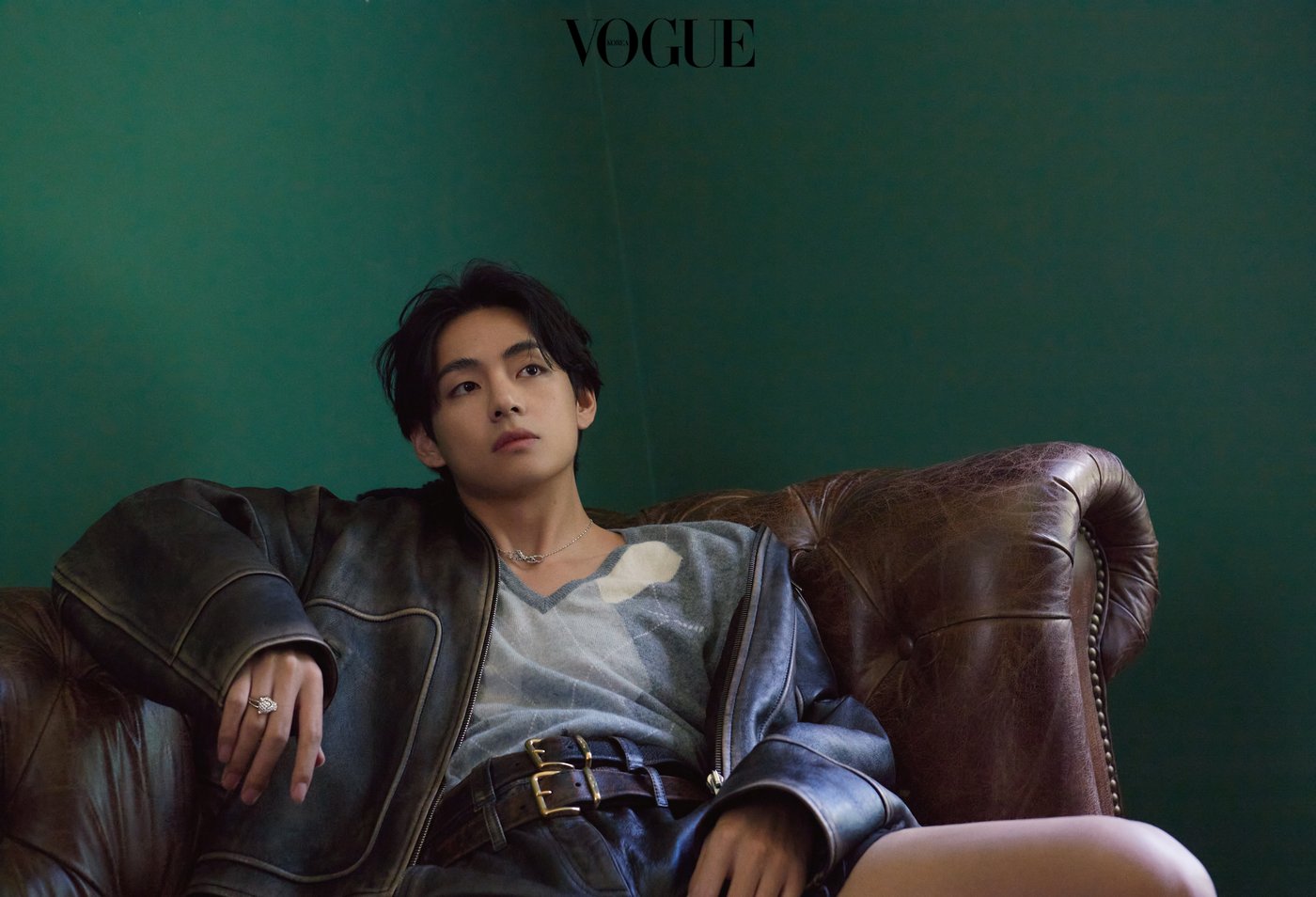 Currently, BTS has been focusing on solo promotions. On how the members continue to offer support and strength to one another while working separately, V explained, “We really support each other. Recently, the members went to Suga’s house to share the solo songs we each made. Some would dance and we’d all say, ‘It’s good, it’s good!'” He added, “I don’t know if it’s because the members are preparing new music of their own color, but it’s great to see how passionately, actively, and diligently we’re making music and loving one another.”

Besides a solo album in the works, V discussed what other fields have caught his interest, sharing, “For starters, everything ARMY likes is what I like, so I want to try everything. There has been talk about a radio appearance so I want to try radio.”

In the thick of BTS’s promotions, V talked about feeling slightly restricted as a member of a group. Reflecting on that, V commented, “I felt really thankful that ARMY perfectly understood how we felt. Thank you for supporting us so much. Thanks to you, I’ve been able to lighten that load a bit.” 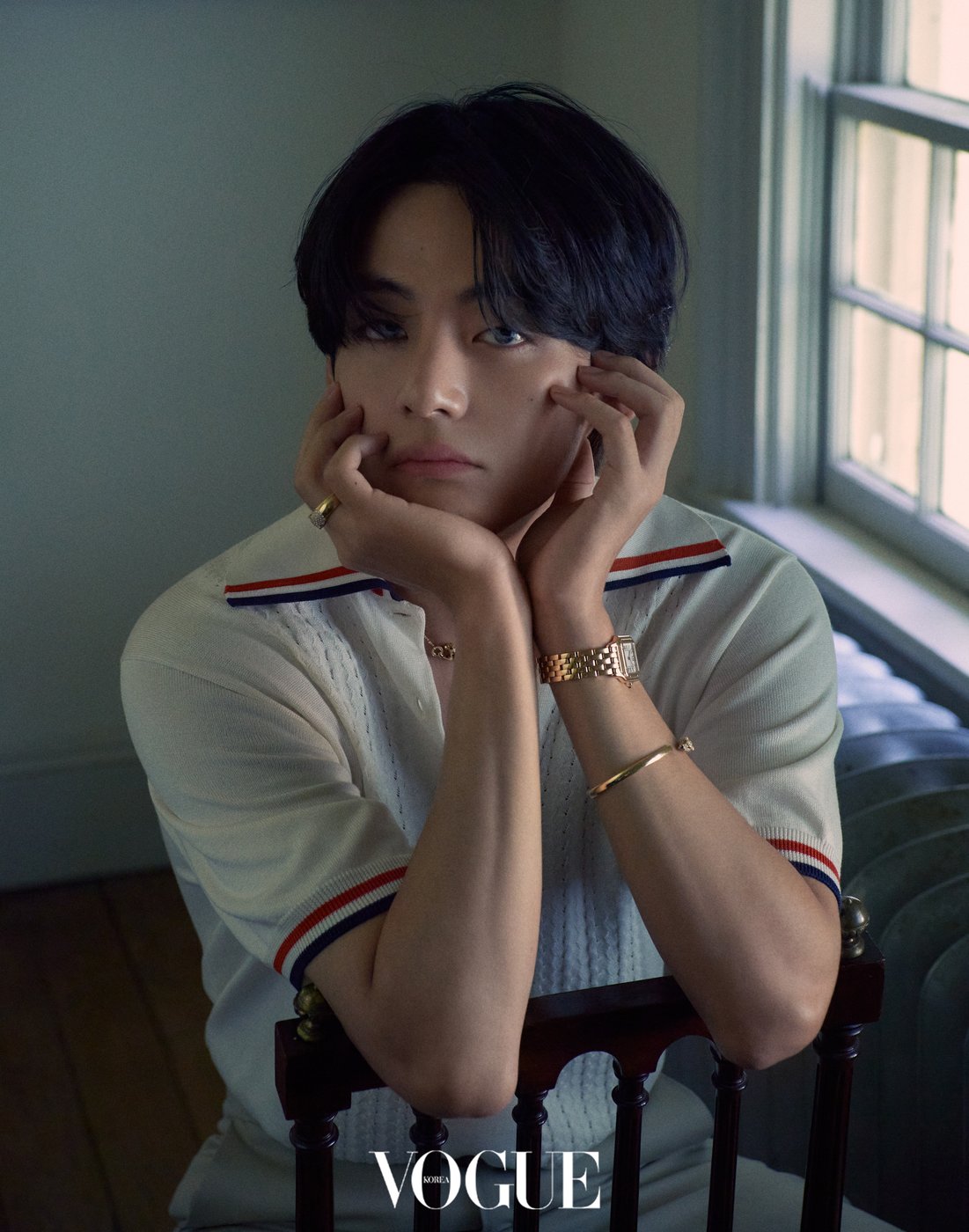 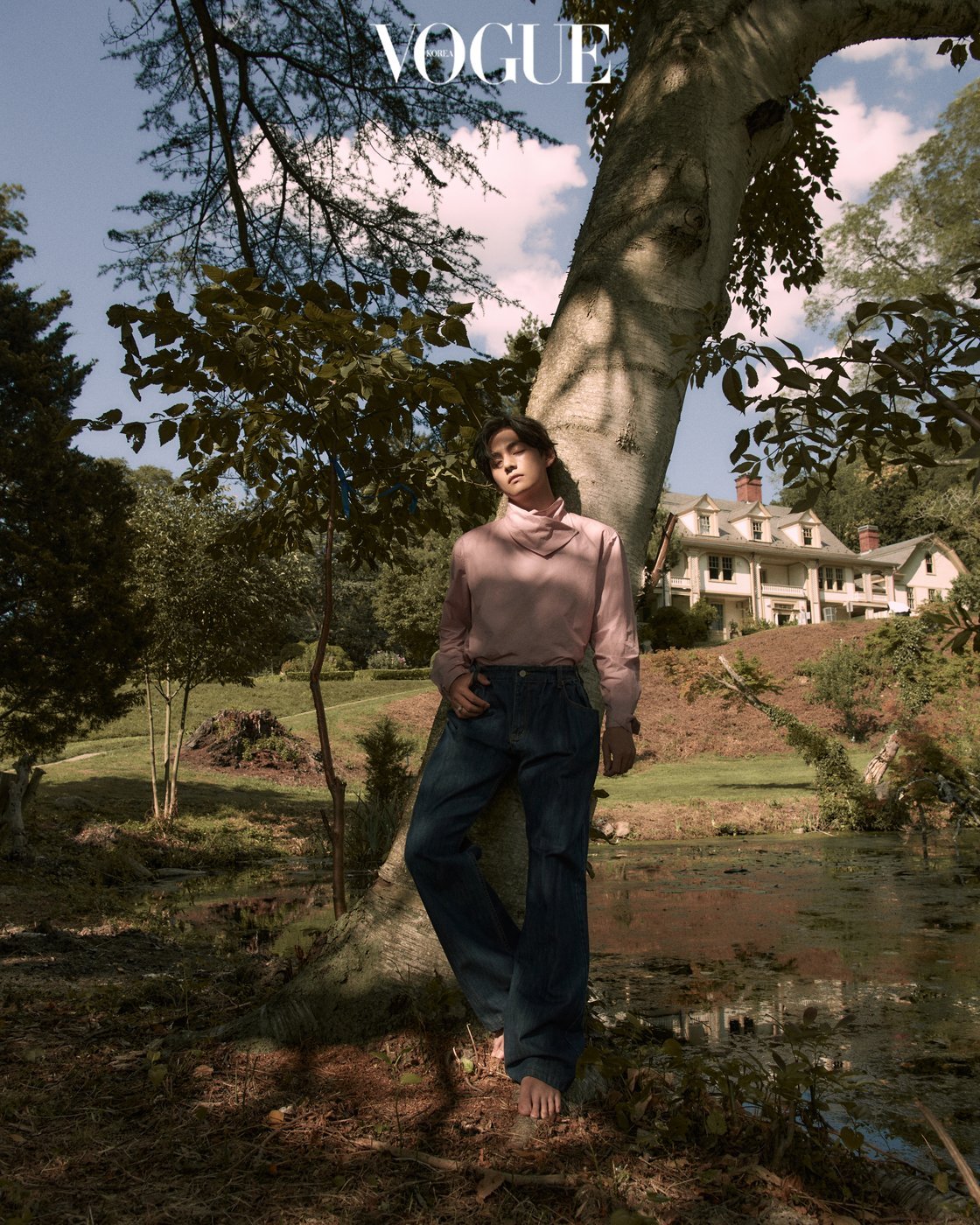 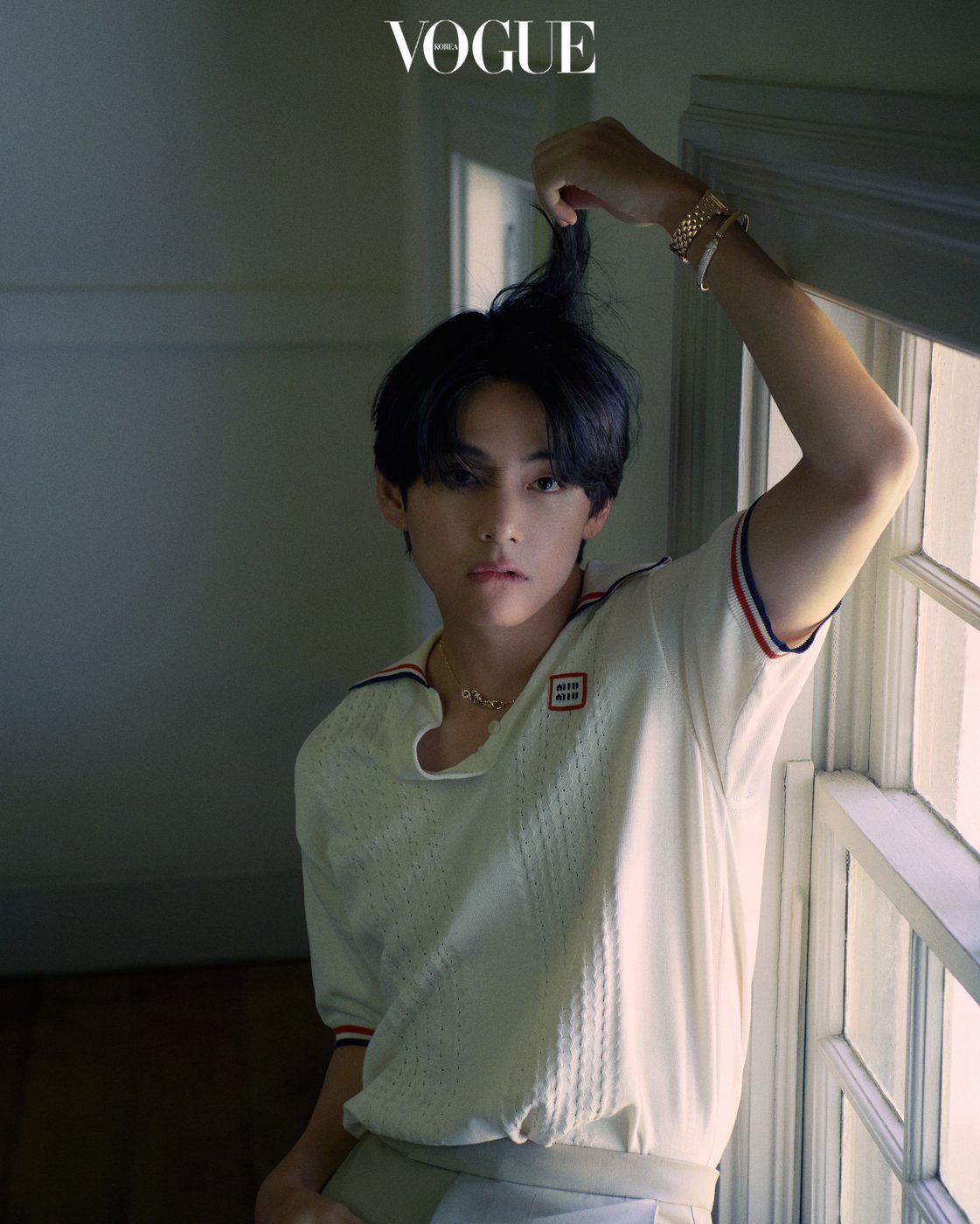 Previously, V described happiness as a moment with no worries. When asked if he’s experienced these moments, he shared, “Hm…I still think those moments come and go. If life is only happy, wouldn’t that be hard too? Just like how you want to eat something bitter or salty when something is only sweet, wouldn’t a life that goes back and forth be good?”

Watch V in “Hwarang: The Poet Warrior Youth” below!