Along with the recent premiere of “Seasons of Blossom,” the cast members took time to share some behind-the-scenes insight!

Based on a popular webtoon, “Seasons of Blossom” tells the story of love and friendship of 18-year-old youths at Seoyeon High School. The drama depicts the butterfly effect that occurs from a tragic incident six years ago as it begins to affect the current teens living in the present. Portraying “the teenagers from the past,” Seo Ji Hoon plays Lee Ha Min, who appears cheerful on the outside but can be quite cynical, while So Ju Yeon portrays the timid but strong Han So Mang with her graceful charms. “The teenagers in the present” are Kim Min Kyu as Lee Jae Min, Seoyeon High School’s most popular student who always puts on a smiling face, Kang Hye Won as Yoon Bo Mi, the school queen who is kind and pretty, and Yoon Hyun Soo as Choi Jin Young, who looks tough on the outside but is unexpectedly kind.

Read our exclusive interview with the actors below:

In percentages, how similar are you to your “Seasons of Blossom” character?

So Ju Yeon: I think I’m about 50 percent similar. What we have in common is that we find happiness in the small things and that we live while enjoying what we can do in the present rather than worrying about the future.

Kim Min Kyu: I think about 50 percent. My character Jae Min appears to be very bright and lively, but he is filled with deep emotional scars on the inside. His brightness and liveliness are very similar to me, but Jae Min’s inner feelings of hiding his emotional scars and protecting himself by creating boundaries with others are part of his personality developed from his personal pain.

Yoon Hyun Soo: 10 percent..? We appear to have similar vibes at first glance, but I think there are actually so many different aspects overall. What we have in common is that [my character is] short, has a younger sister, and his face and ears get red when he holds hands…?

What was the most difficult aspect of playing this character?

Seo Ji Hoon: It was surprisingly difficult to act out my character appearing bright.

So Ju Yeon: I had to show different acting when my character is a student and when she is a teacher, and rather than that being difficult, I tried to stay on my toes and not lose focus in order to differentiate my emotions.

Kim Min Kyu: When working on a webtoon-based project, I observe the original webtoon and think about the character’s personality and characteristics. With “Seasons of Blossom,” however, many changes were made to the characters’ attitudes and relationships as two parts of the webtoon were adapted together. There were especially many changes made to the character Lee Jae Min, and the director said that he has become the most difficult character due to the adaptation, so I did feel some pressure. However, constantly asking questions and discussing with the director allowed me to gradually immerse myself and assimilate into the character Jae Min.

Yoon Hyun Soo: Jin Young is a character who generally doesn’t have a wide range of emotions, but he has charms that can be discovered if you look closely, so I put in a lot of effort to express those aspects as much as possible. An example of this might be his warmth that isn’t noticeable on the surface. 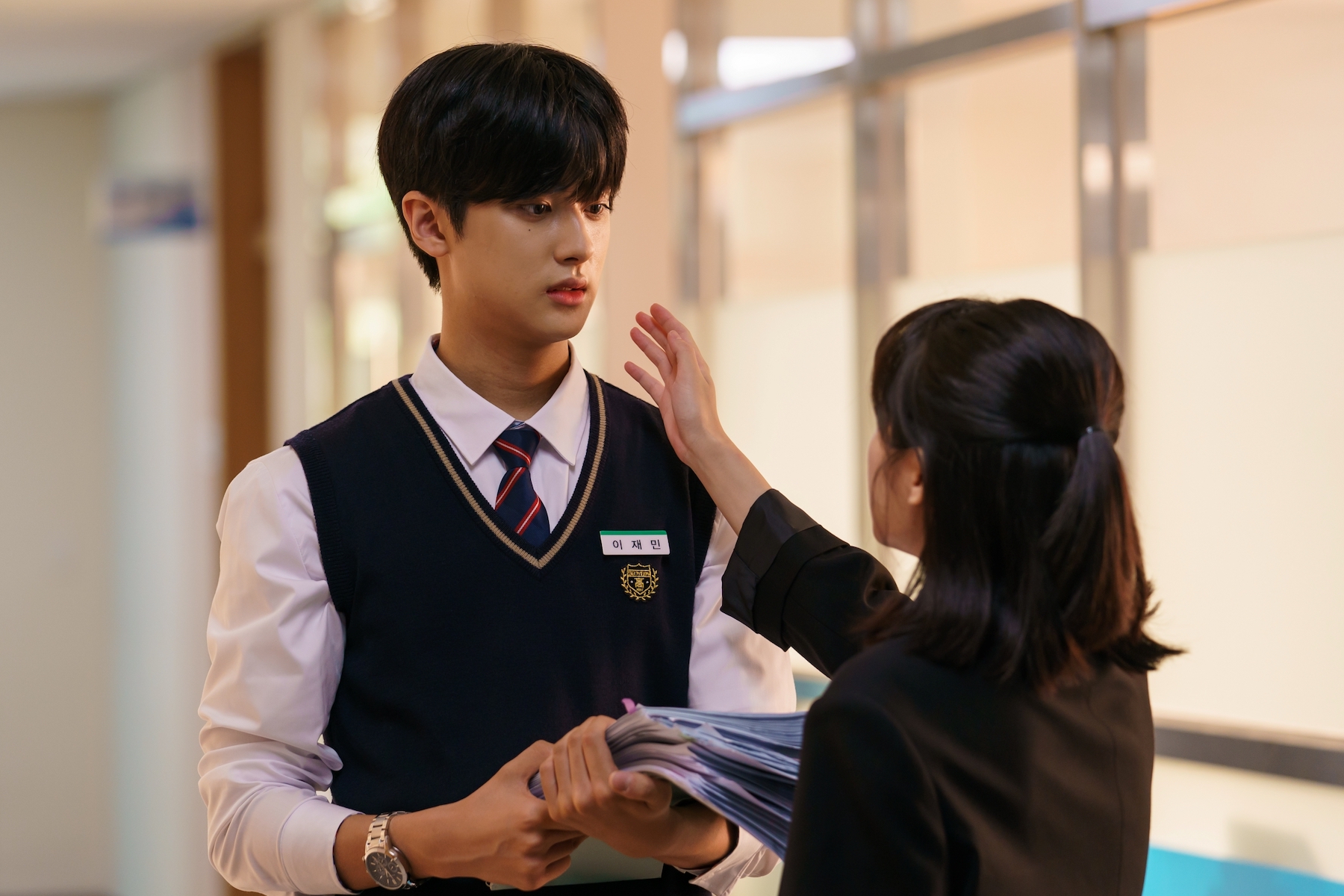 Of the “Seasons of Blossom” actors, which actor’s first impression was most memorable to you?

Seo Ji Hoon: Actress Oh Yu Jin who plays Kang Sun Hee. I was surprised because she was perfectly in sync with the webtoon character.

So Ju Yeon: Actor Seo Ji Hoon. I had a script reading session with Ji Hoon before meeting the other actors, and he led me comfortably since the first time we met, so we were able to get close quickly. Thanks to that, our chemistry was good on set also.

Kim Min Kyu: All of the actors were memorable to me. I especially remember when I first met the actors who play Seoyeon High School’s second year students in Class 5. Even when we first met, I was glad to see them like how I feel when I meet up with friends from my school days. Since I felt that since our first encounter, I was slightly relieved and happy thinking, “I will be able to enjoy filming for this drama also.”

Yoon Hyun Soo: When I saw [Shin] Ju Hang and [Lee] Jae Sung who play Jin Young’s friends Ui Joon and Tae Jin along with [Oh] Yu Jin who plays Sun Hee, I really thought they came straight out of the webtoon. When I saw [Kang] Hye Won who plays Bo Mi, I thought, “She is very pretty.”

What do you usually do during breaks on set?

Seo Ji Hoon: I had a lot of days when I mostly filmed with So Mang (So Ju Yeon), so I talked and joked around with So Mang.

So Ju Yeon: Besides for emotional scenes, during breaks while filming, I chatted and played games with the staff members I worked with, and we talked about my character together. On days without filming, I tend to work out or continue to look for input that continues to remind me of my character’s image.

Kim Min Kyu: I normally check the script. In order to not lose track of my emotions [for the scene], I constantly double check while reading the script. I also hung out with the actors and shared a lot of conversations. Sometimes, I also took a slight nap. (Laughs)

Kang Hye Won: I have fun with the friends I’m starring with.

Yoon Hyun Soo: During breaks, we play phone games together (I won them all), film videos together, and take photos. I also remember Bo Mi (Kang Hye Won) and I joked around whenever we got the chance..haha. 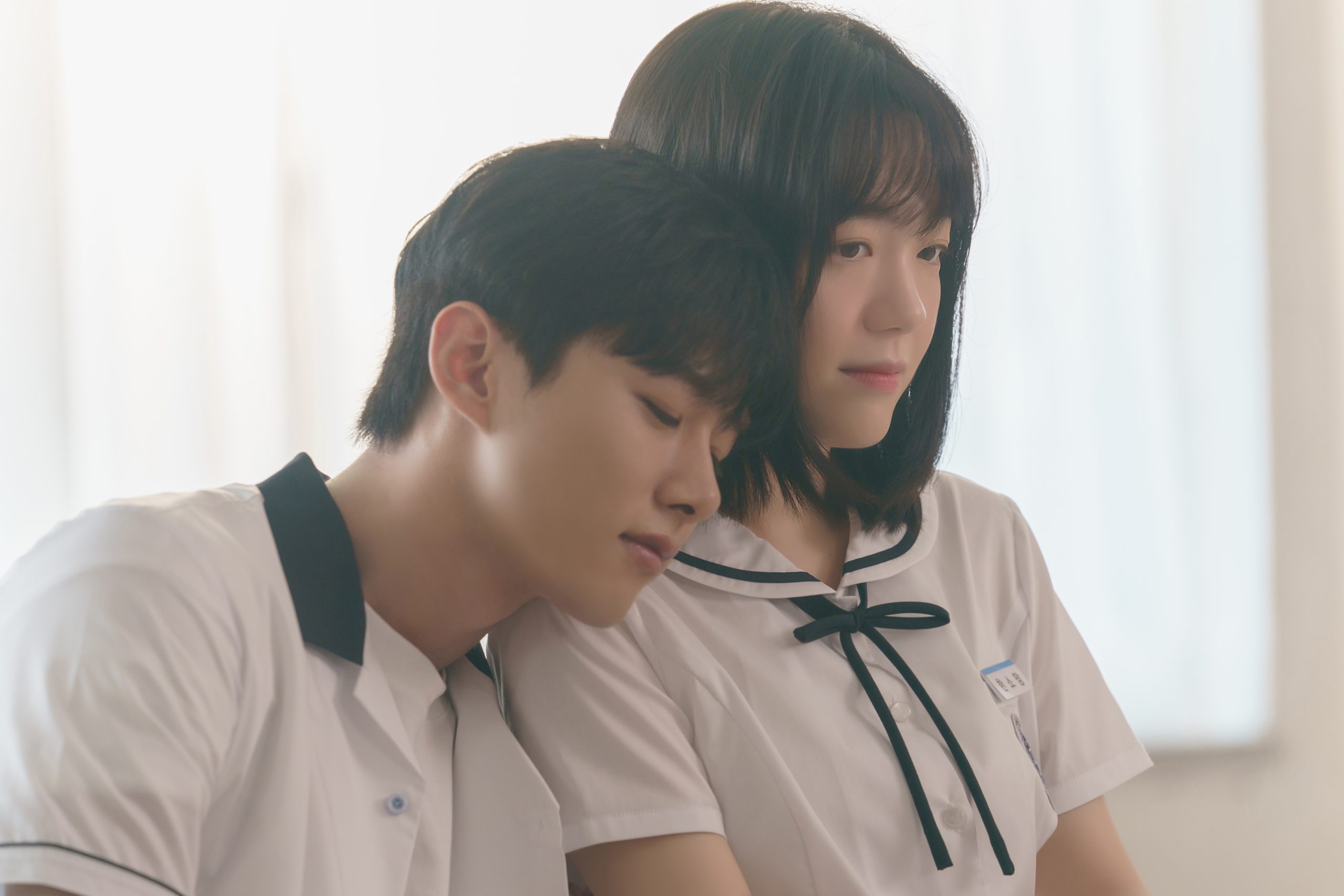 What was your favorite subject in school?

Seo Ji Hoon: I liked fine arts and athletics such as P.E., art, and music.

So Ju Yeon: I enjoyed Japanese. I first fell into [the subject] because I liked the pronunciation and the teacher, but I wanted to study it more deeply later, so I entered the Japanese language department.

Kim Min Kyu: I enjoyed history the most. Since I was young, I enjoyed reading historical manhwa (Korean comics). That’s why I naturally built up knowledge of history. In particular, during exam periods, it was to the extent that I would nearly memorize all the history books. Like how they say, “You see as much as you know,” [the subject] became gradually more interesting since I had a broader vision.

Yoon Hyun Soo: I enjoyed P.E. and English the most.

What was your favorite lunch menu in school?

Seo Ji Hoon: I’m not picky, so I enjoyed eating everything!

So Ju Yeon: Stir-fried sausages and vegetables. They always gave us little of the sausage side dishes, so I always wanted more. It was a shame [we couldn’t have more].

Kim Min Kyu: The school lunches were all delicious. That’s why rather than having a favorite meal, I had a favorite day. I liked the lunch menus on Wednesdays the most. Wednesdays were “no leftover days,” so it was the day they provided more delicious side dishes so that we wouldn’t have any leftovers. I remember even eating twice when a particularly delicious meal came out.

What is the first drama you remember enjoying when you were young?

Seo Ji Hoon: It was “Stairway to Heaven.”

So Ju Yeon: “Pasta.” In the drama “Pasta,” there is a scene of Gong Hyo Jin making and eating aglio e olio, and she ate it so deliciously and adorably in that scene that it is still my favorite food.

Yoon Hyun Soo: “Reply 1988.” It is the drama that gave me the dream of becoming an actor. 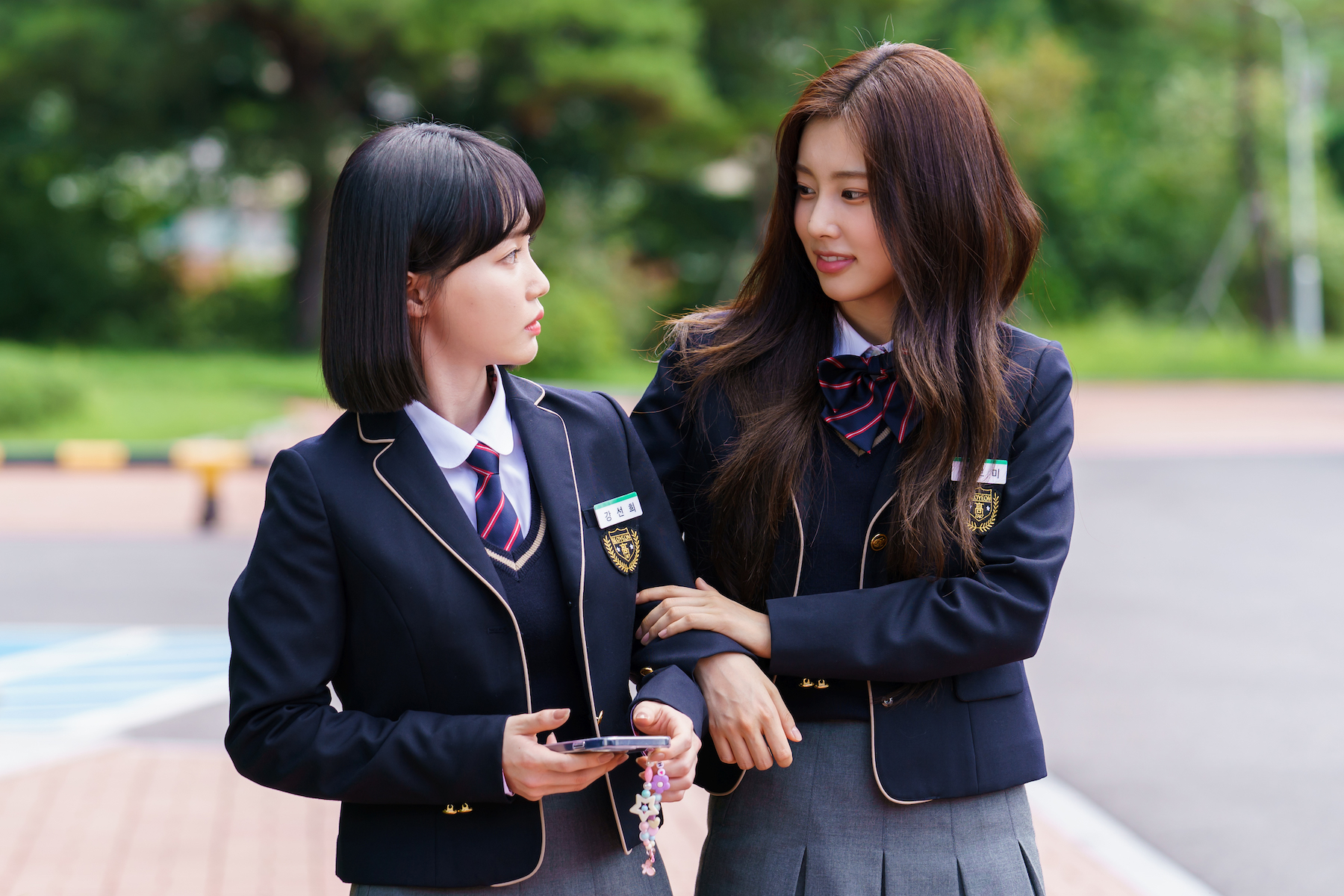 What is a song you enjoy listening to these days?

Seo Ji Hoon: I enjoy listening to Giriboy’s “Let’s Not Love Each Other.”

So Ju Yeon: Joji’s “Glimpse of Us.” It is a song I listened to often on set.

Kim Min Kyu: I enjoy listening to Lee Seung Yoon’s “The Giving Tree.” The song is so nice. I think I always end up listening to it at least once a day.

Yoon Hyun Soo: I think I listen to songs by Nerd Connection and AJR a lot.

What is your TMI of the day?

So Ju Yeon: In order to build up my lost stamina, I went to work out, and I ate a lot of supplements.

Kim Min Kyu: I have traveled back to my hometown and am working out very hard here also.

Yoon Hyun Soo: Today’s TMI is that I fell asleep at 6 a.m. after watching the drama “Narco-Saints.”

Seo Ji Hoon: Hello. I’m actor Seo Ji Hoon. “Seasons of Blossom” is a youth drama that viewers will think of every summer. Please show lots of interest and love. Thank you 🙂

So Ju Yeon: Hello, I’m So Ju Yeon who plays the role of Han So Mang in “Seasons of Blossom.” Thank you for reading this interview, and please love “Seasons of Blossom” a lot. I’ll continue to work hard to greet viewers frequently with various characters in diverse projects going forward!!

Kim Min Kyu: Please tune in to “Seasons of Blossom” which captures the bittersweet romance of teens. Thank you.

Kang Hye Won: Thank you for always supporting me!

Yoon Hyun Soo: Hello! I’m Yoon Hyun Soo who plays the role of Choi Jin Young. I’m really grateful for having received so much love since my debut, and I will continue to impress, so please show lots of love and support..! I really hope we can meet!! I love you!!! 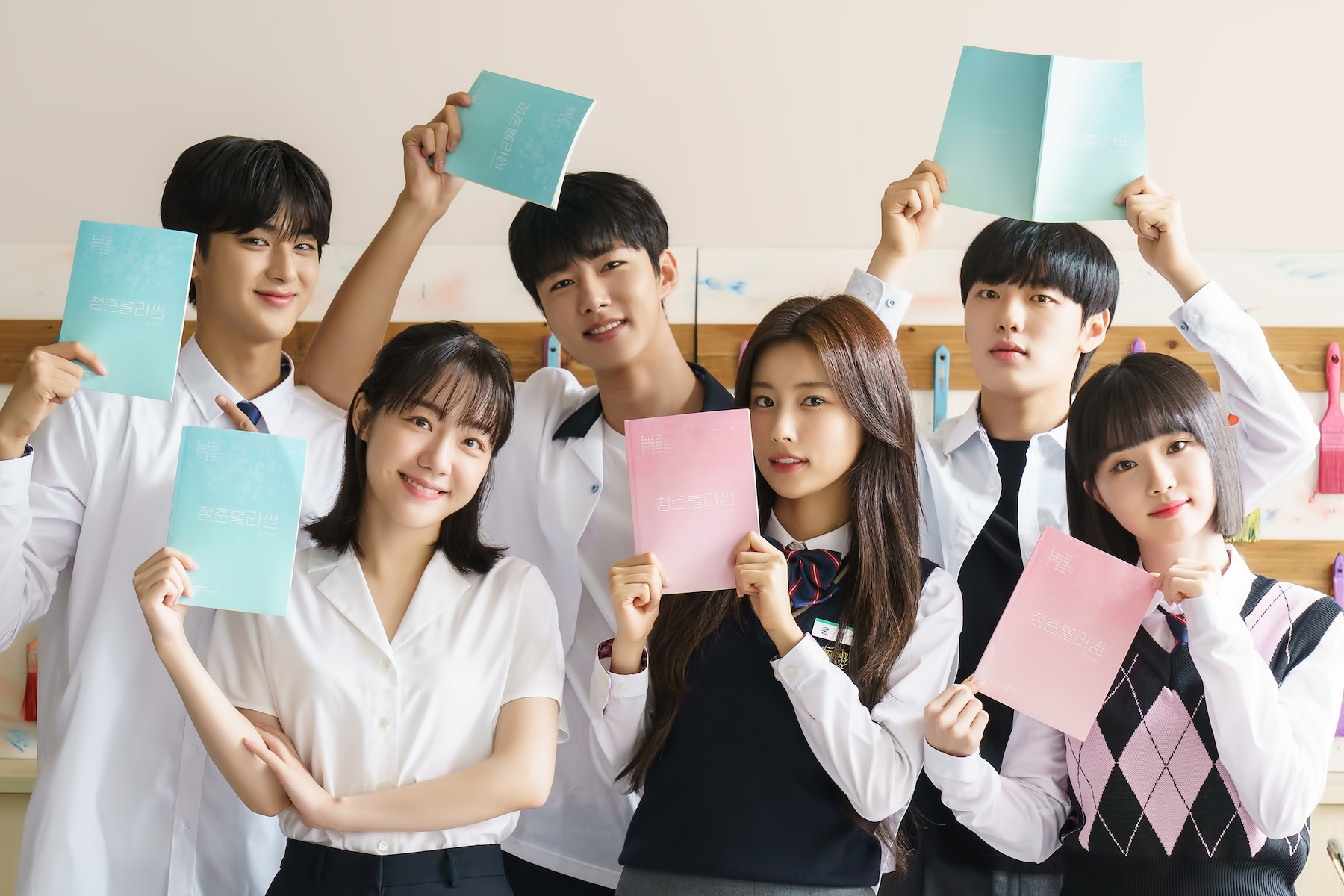 Watch “Seasons of Blossom” with subtitles below: