LOONA’s Chuu Opens Up About Her Unhealthy Stress Relief Methods, Pressures To Maintain Her Bright Image, And More

LOONA’s Chuu has opened up about her current concerns and unhealthy methods of stress relief with psychiatrist Oh Eun Young.

On October 7, Chuu appeared as a guest on Channel A’s “Oh Eun Young’s Golden Clinic” to speak with renowned psychiatrist Dr. Oh Eun Young about her patterns of coping with stress.

Chuu cautiously shared, “I think I went to the hospital once a month to get an IV. Because my stomach is ‘broken.'” She elaborated, “When I was stressed, for a period of time, I’d eat a ton of spicy food. It’d always be level five [for spice] or the spiciest option.”

Chuu explained that when stressed, her common relief methods were either eating spicy food or overeating. As an example, Chuu described a recent meal she ate alone, which was spicy chicken stew for two to three people with rice cakes, glass noodles, and a bowl of rice. Although she shared that this was enjoyable, Chuu added that she would often eat until she felt like she could not breathe, which occasionally led to throwing up.

Elaborating on her hospital visits, Chuu shared, “From last July to April or May of this year, I went [to the emergency room] often.” Since she’s used food as a stress reliever for awhile, Chuu explained that this had deteriorated her stomach over time. “I could never control myself,” she shared. “If I ate up to here, I also ate a lot of medicine for digestion.”

Touching on the pressures of dieting that are often enforced onto girl groups, Chuu shared, “On days where I thought I really ate too much, I don’t know if I’m allowed to say this, but there were times I’d feel nauseous [and throw up].” She continued, “Since I relieve stress by eating but then get stressed from eating and also have to promote, there was a time I took diet medicine.” However, Chuu revealed that she stopped taking them after hearing about the negative side effects they could have on mental health.

Chuu detailed how accomplished she felt when eating incredibly spicy food and that she enjoyed the way it cleared her thoughts, but Dr. Oh Eun Young explained how this method of stress relief could have aspects of self-harm. She shared that this was because spicy food is tasty in the moment and allows people to momentarily forget about their struggles, but its aggressive taste eventually harms one’s body and stomach. 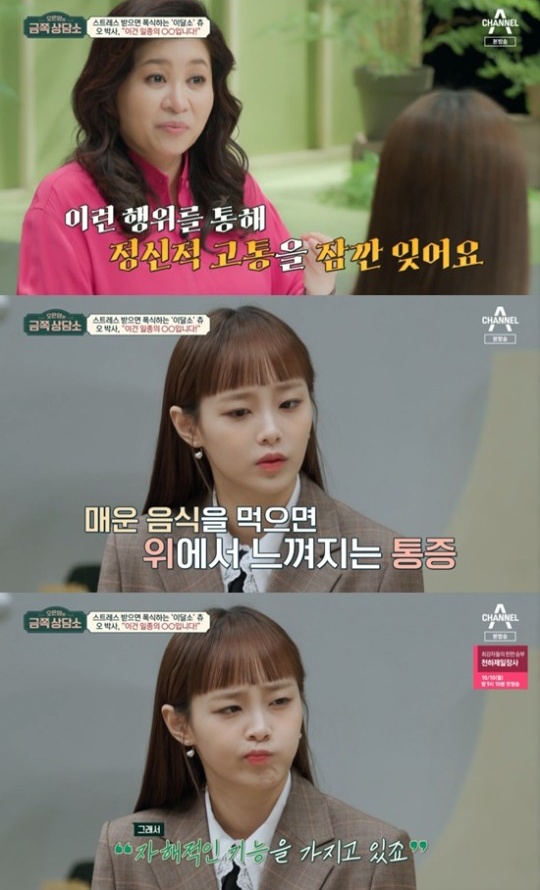 When asked why she’s learned to lean on food for stress relief, Chuu talked about how it was instantly gratifying and required little energy. She shared, “Last year, I didn’t have an income. So while I wanted to eat, the cost was too great, which also caused me stress. That’s why it became a habit for me to order one incredibly spicy thing to eat without sparing anything.”

Dr. Oh Eun Young evaluated that Chuu looks for quick solutions because she has a hard time dealing with stress, when it would be more helpful to take a long, hard look and identify what her stressors were. Chuu shared that besides food, crying helps relieve her stress because she’s able to let everything go on her own rather than transfer her problems onto someone else by venting.

Hearing this, Dr. Oh Eun Young added, “Crying when you’re really sad is okay. Crying is not bad. But a healthy way of relieving stress is knowing exactly what your stressor is. You have to know why it’s a stressor in order to resolve it well and you do not have to specifically do anything.” 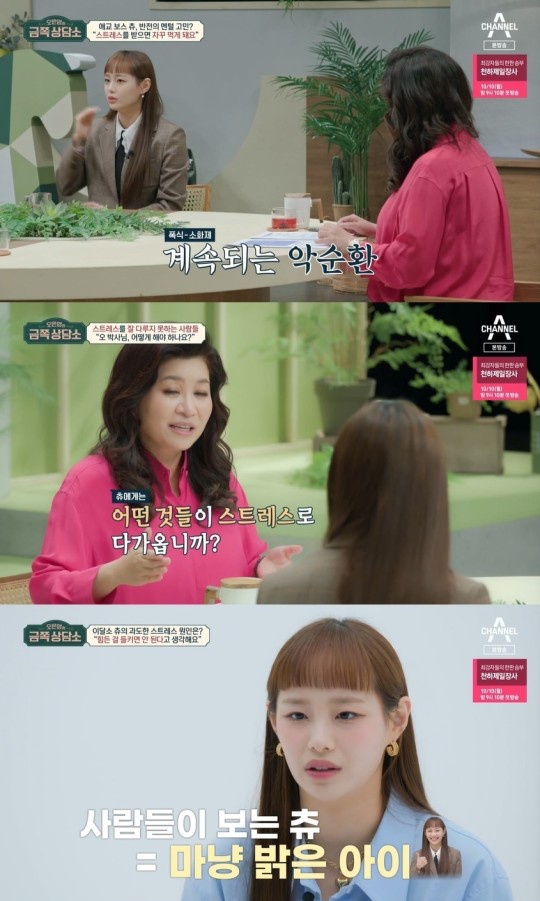 When asked what her stressors were, Chuu shared that she has intentionally erased them from her memory and explained that she wasn’t the type to vent to others because she doesn’t like others knowing about her hardships. She then added that the more she was struggling, the harder she tried to hide her true feelings and appear even brighter.

Chuu commented, “As people view me as a bright kid, I want to protect that image of bright Chuu. If possible, I try to never cry in public.” She continued, “Ever since I was young, my dream was to become a singer and a celebrity. Thankfully, people recognize me a bit now and send love so I really want to protect that. I can develop that more but I don’t want to fall back or rest.”

Unlike her image on broadcasts, Chuu revealed that she felt incredibly sad and lonely when she was at home. Given the hardships she’s endured over time, Chuu added that she now finds it harder to smile for long periods of time on broadcasts. On set, Chuu reassured everyone by saying, “Since emotions are different everyday, if there’s a hardship, I stop and think over it. When nothing’s wrong, I want to share that I’m still someone who enjoys a bright image and talking and hanging out with other people.” 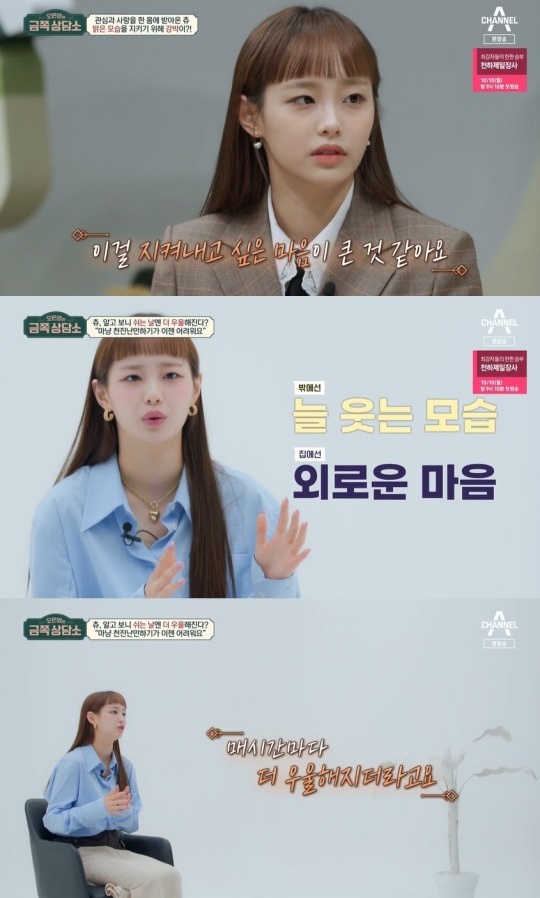 In response to Chuu feeling pressured about her bright image, Dr. Oh Eun Young comforted the star and commented, “Showing yourself as you are is showing who you are. There’s no reason to try excessively hard. I hope you will protect yourself well.”