Miyeon And Shuhua Share What (G)I-DLE Means To Them, Break Down The Meaning Of “Nxde,” And More

(G)I-DLE’s Miyeon and Shuhua have broken down their latest song “Nxde” with GQ Korea!

Earlier this month, (G)I-DLE made their comeback with their fifth mini album “I love” and title track “Nxde,” which is about showing their “real selves” going forward even if it means no longer receiving love from people, as opposed to being loved for a fake image.

The two (G)I-DLE members talked about how they’ve applied this in their own lives recently with Shuhua sharing, “When we were creating choreography this time! We did freestyle while filming our music video but during choreography practice, our teacher created [the dance]. But during practice, I wanted to do a slightly different move. I asked our teacher what they thought and they said it was allowed so I was really proud. I was incredibly proud. Rather than do as I’m told, I want to try doing as I please. It felt like I was able to showcase more.”

Miyeon explained that people tend to assume that she’s incredibly considerate of others because of her soft voice tone and role, but that she’s actually pretty stubborn. Laughing, she commented, “To be honest, I think I’ve lived my life all this time doing what I want. That includes becoming a singer.”

Elaborating on why stubbornness is occasionally necessary, Miyeon shared, “For most people, there are more cases where they’re unsuccessful when working. I think there are lots of people who think, ‘is it right that I do this?’ That’s why I think the message of our new song will become strength to people like that.” 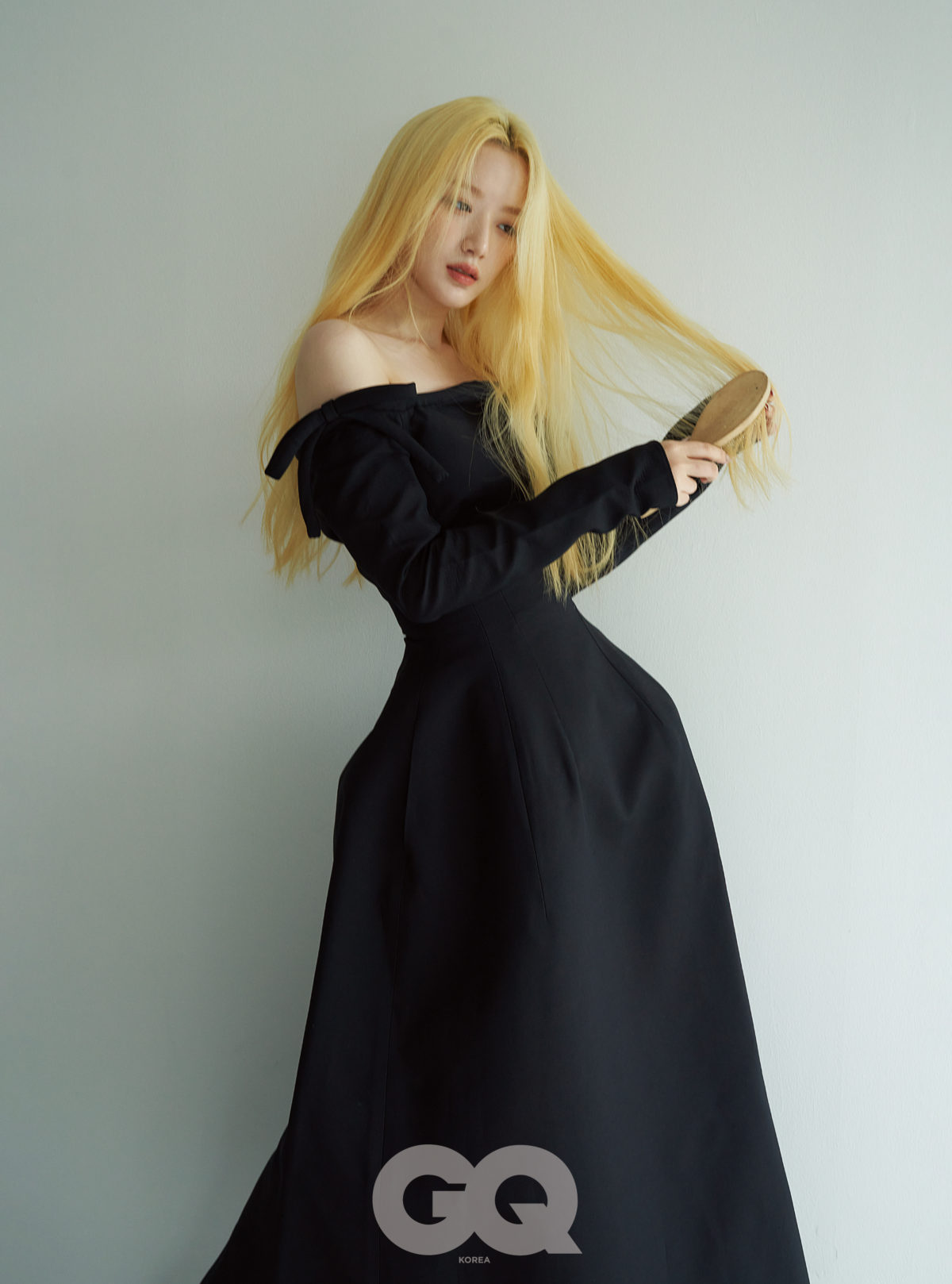 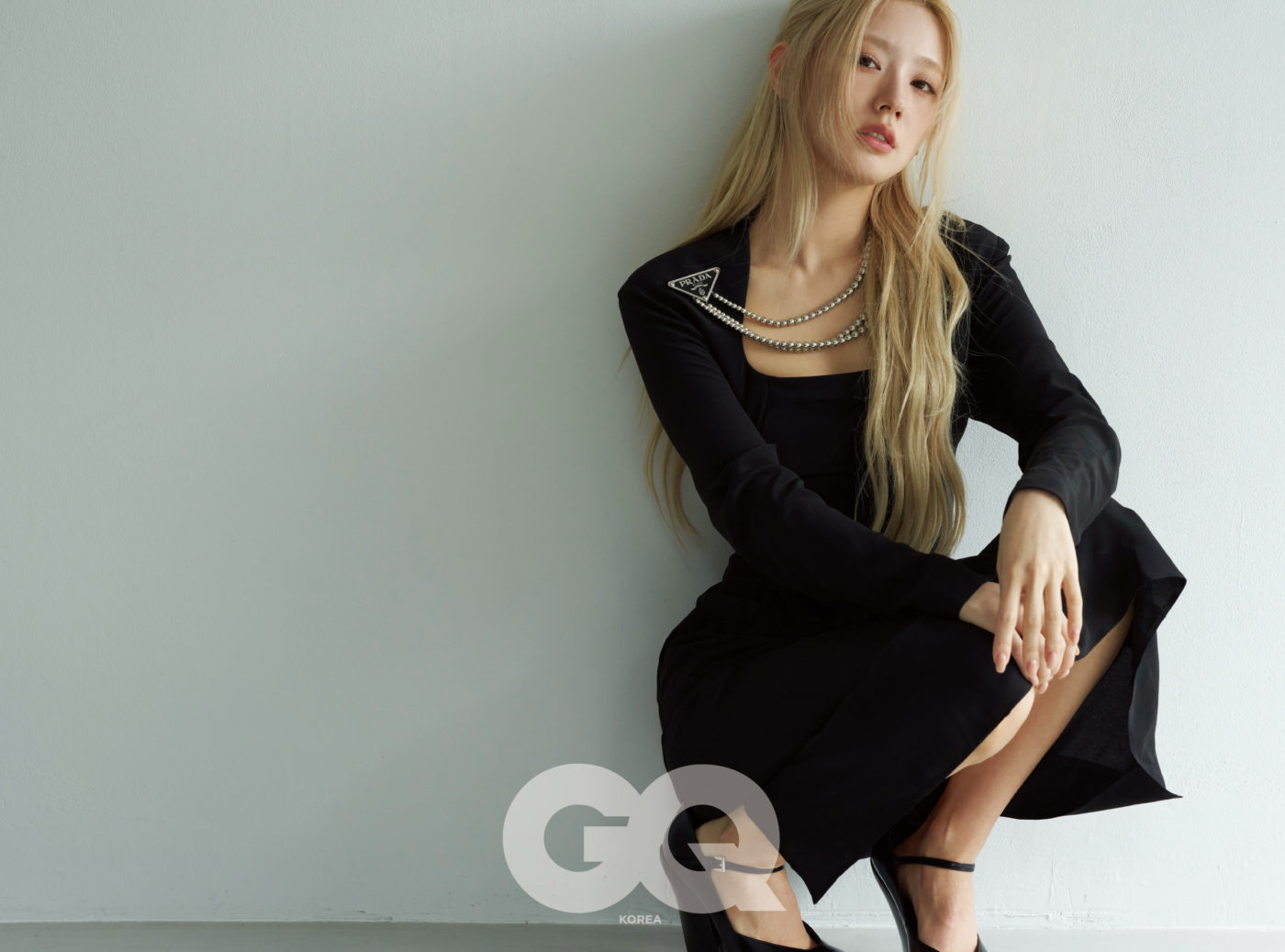 The members then dug deeper into the meaning of “Nxde” as Miyeon commented, “The song title is ‘Nxde’ but the ‘nude’ we are trying to convey is the concept of one’s bare self. It means that when you are wandering, or conflicted in the face of an important decision, you have to look at your true, honest self.”

Shuhua added, “People have a fundamentally racy image with regards to the term ‘nude.’ But the meaning of the term itself is not sexual. We chose this word to show ourselves, as we are.”

At the end of “Nxde” is Shuhua’s impactful line “The pervert is you.” To elaborate on this, Miyeon shared, “This is the reason why we put in this lyric. Because we think that depending on your perspective, everything can change drastically. So we wanted to tell those people that ultimately, the pervert is you and thinking like that is your perspective.” 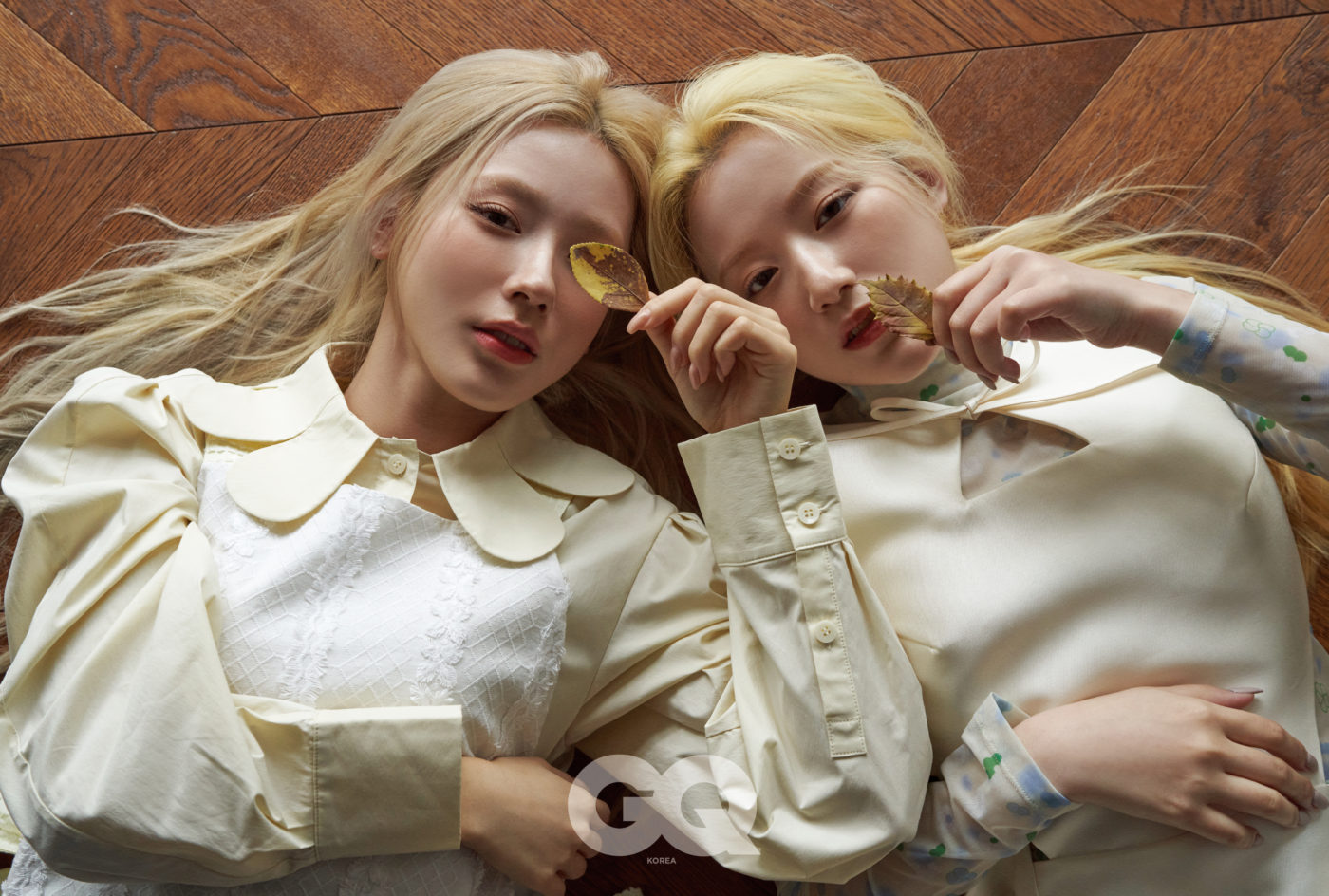 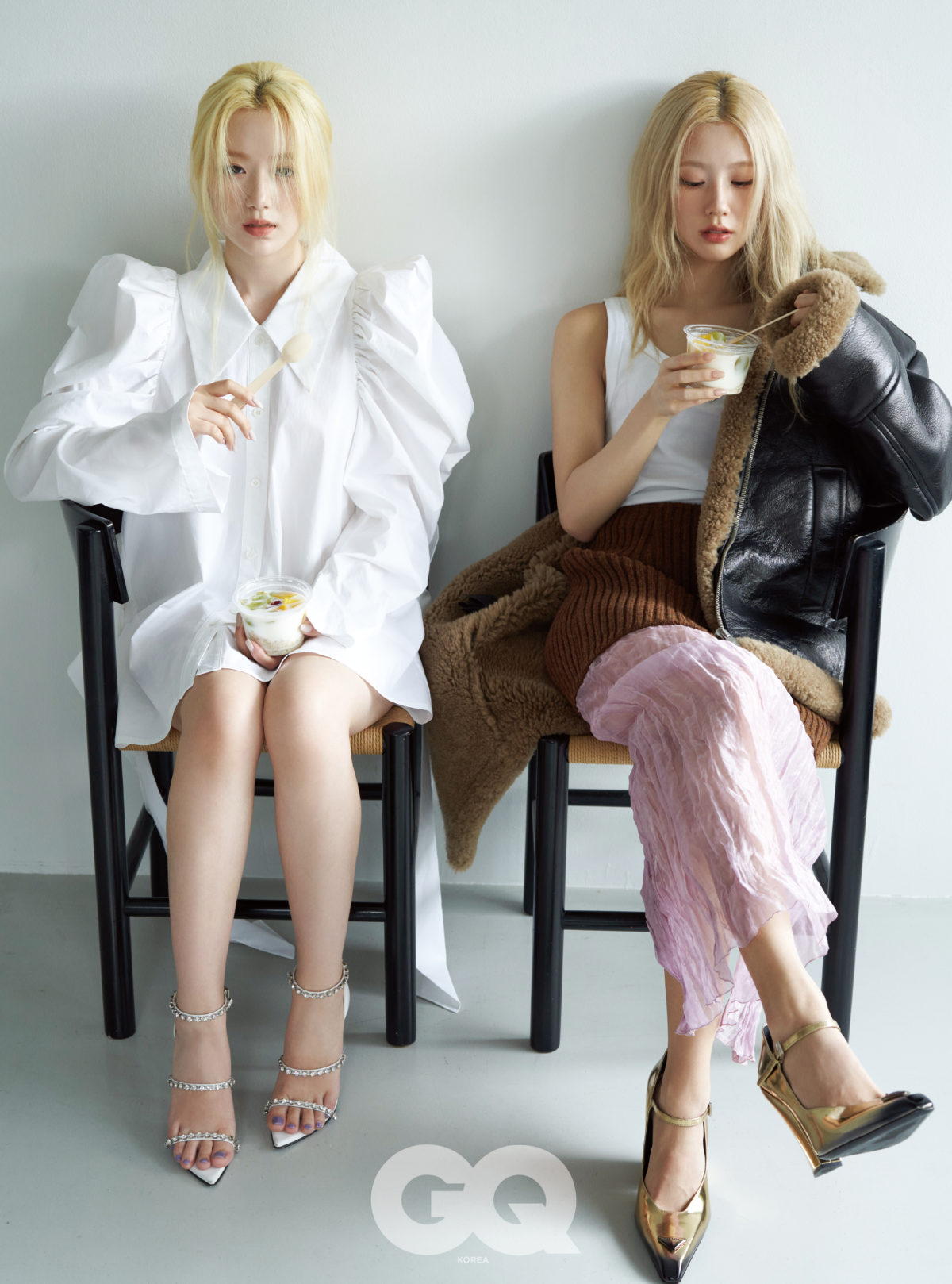 Ahead of their comeback, (G)I-DLE dropped bold and eye-catching teaser images featuring all five members with blonde hair and red lipstick. This was especially a shock to fans, as Shuhua has previously been open about not wanting to dye her hair.

Shuhua explained her change of heart, saying, “The members were at a team dinner and Soyeon was sitting next to me when she said she had something to say. That’s when Soyeon told me. She didn’t push and just said comfortably, ‘Shuhua, you can choose without rushing. Don’t be stressed.’ That’s why I decided [to dye my hair].”

Miyeon then revealed that their member Minnie had been so touched by Shuhua’s decision that she began crying. Shuhua remarked, “My hair is so precious to me. That’s why I think my members were so shocked at my decision.”

In a separate video interview for GQ, Miyeon described (G)I-DLE as her family, while Shuhua said that the team was the best. Shuhua shared, “Saying that we’re the best [is because] although we are ultimately individuals, we mesh well when we gather and even though there are times when we don’t mesh, we eventually come together and get along. We’re so comfortable with each other. It also means that our teamwork is the best. We all have potential, are pretty, and are kind. We also each have our own opinions. That’s why I wrote that we are the best.”

On the other hand, Miyeon commented, “We spend a lot of time together, talk to each other first no matter what happens, eat together, live together, and resolve arguments right away. It’s no different from family.” 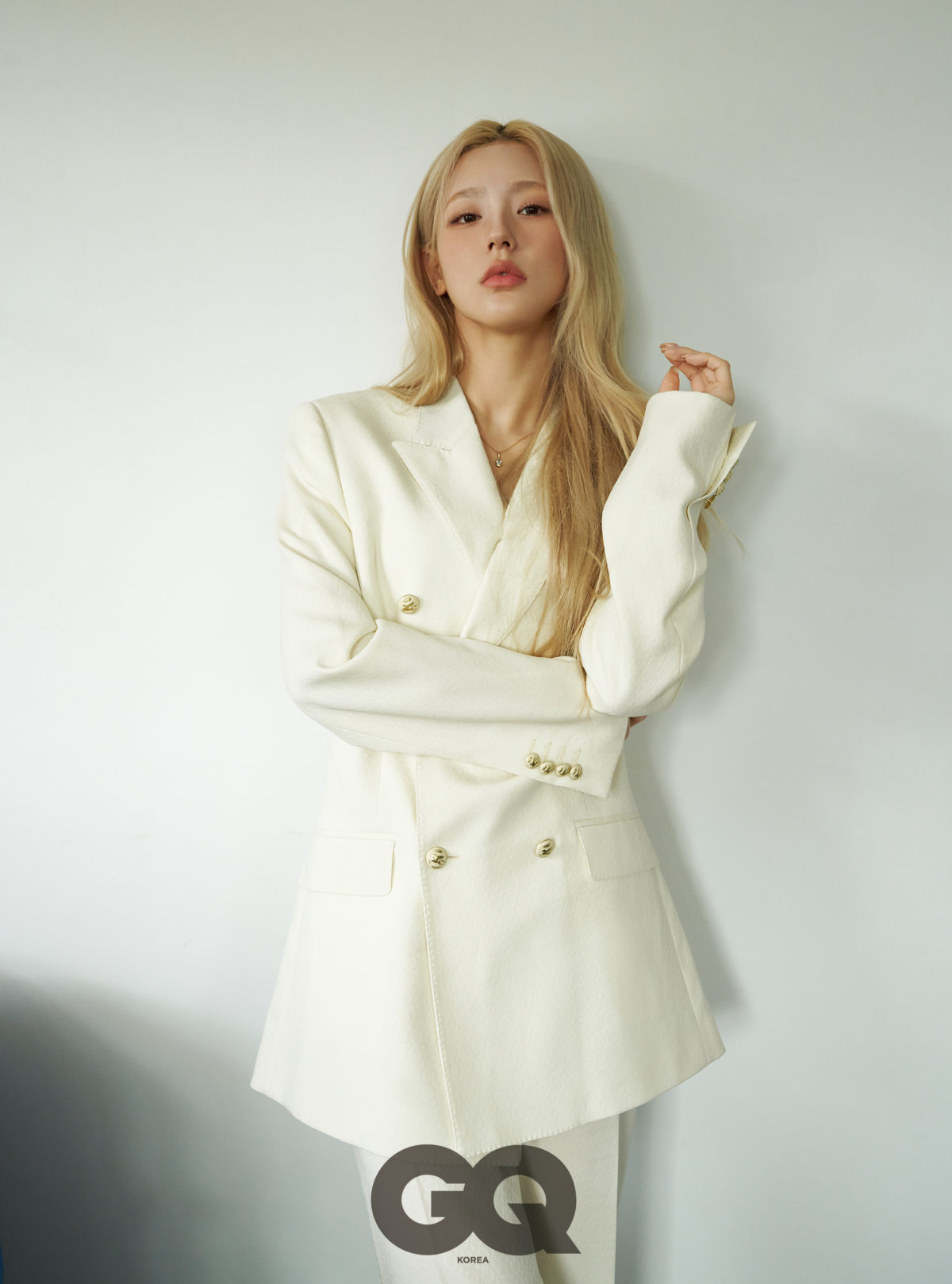 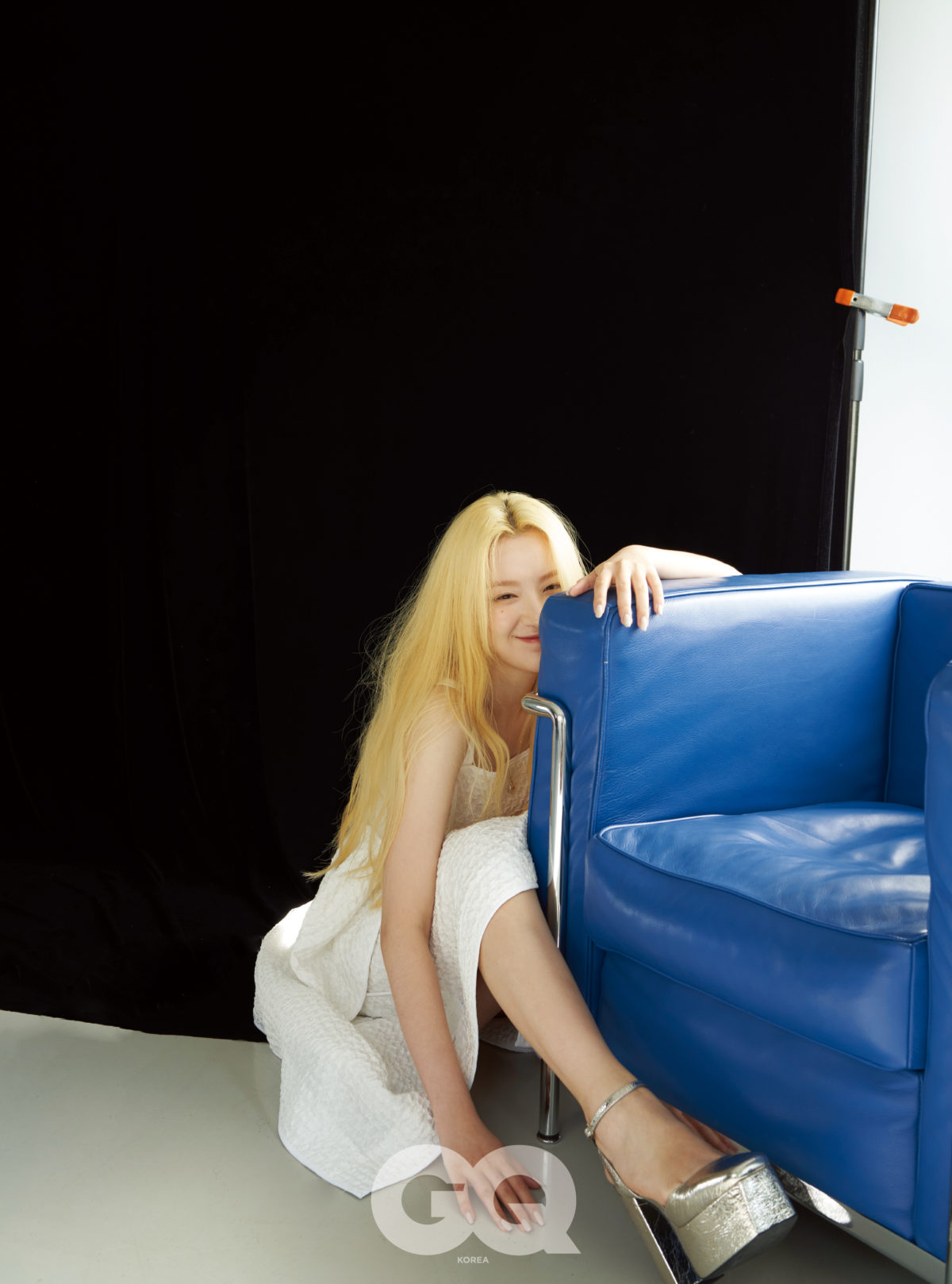 Looking towards the future, the (G)I-DLE members were asked what kind of work they eventually want to try out. Miyeon answered, “For a big dream, I want to perform with my members at a big venue. Personally, I want to try writing lyrics and songs later on. I want to write lyrics that people can relate to.”

After thinking deeply, Shuhua responded, “I did plays in high school but since I only did it at school, if the opportunity arises in the future, I want to try doing it at a theatre. Instead of in front of a camera. On a theatre stage, where there’s an audience.”

Start watching Miyeon in “Her Bucket List” with subtitles here!

(G)I-DLE
GQ
Miyeon
Shuhua
How does this article make you feel?