On November 4, NCT 127 held the first night of their “Neo City : The Link” concert in Jakarta at the Indonesia Convention Exhibition.

Things got off to a rocky start when a bomb threat was made ahead of the concert, but fortunately, the police found no evidence of any bombs or explosives after thoroughly searching the venue.

However, the night’s troubles didn’t end there. Initially, the concert proceeded without any issues, but towards the end of the night, the crowd in the standing section began to push forward towards the stage.

After noticing the dangerous situation developing in the standing section, the NCT 127 members repeatedly urged concertgoers not to push and to step back. The group even stopped performing and cut off the music in an attempt to get through to the crowd, with Doyoung saying, “Safety is what’s most important. Let’s make a promise not to push.”

Unfortunately, despite the group’s best efforts, they were unable to get the crowd under control, and they ultimately left the stage and ended the concert early due to concerns about the attendees’ safety. According to local police, at least 30 members of the crowd fainted and were subsequently taken to the hospital.

Their full English statement is as follows:

Hello, we are from Dyandra Global Edutainment.

Below is our explanation regarding the halt of the NCT 127 2ND TOUR “NEO CITY : JAKARTA – THE LINK” concert on November 4 and the announcement for the November 5 show.

We have been informed about the general rules and safety procedures in advance, as well as advising our security team to remain in an orderly manner while the show goes on. However, an unforeseen circumstance happened at the end of the show. Concert [attendees in] the standing section appeared to go unorganized, which resulted in chaos and eventually led to the halt of the show for the sake of their safety.

We’re very grateful that no one was injured. However, as we put the safety and security of the audience as our top priority, the halt of the show became inevitable.

We’re deeply sorry for everyone who came to our Day 1 show for not being able to enjoy the concert until the end.

We would also like to apologize to all members of NCT 127 and SM Entertainment for not making the desired concert possible.

To make amends for today’s incident and give the best experience, we will add more paramedics and security personnel for the Day 2 show.

We will continue to work closely with the local police and work as hard as we could to avoid any incidents from happening again.

We also encouraged tomorrow’s audience to maintain safety procedures during the event. 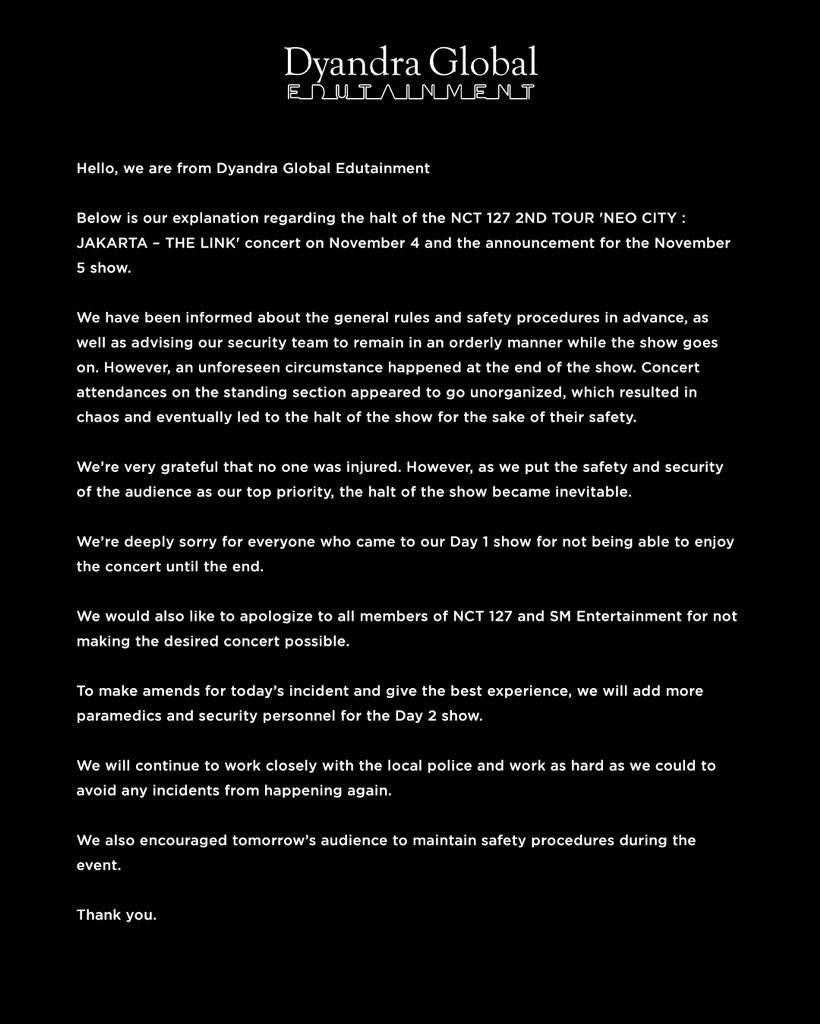