Based on the hit webtoon of the same name, “Weak Hero Class 1” is an action school drama starring Park Ji Hoon as Yeon Si Eun, a model student who excels at school, but is physically frail – making him an easy target for bullies who are jealous of his top grades. Though Yeon Si Eun appears weak on the outside, he eventually uses his brain to win his battles as he fights back against the violence that unfolds both inside and outside of school.

The drama’s new poster captures this passionate trio sitting in a destroyed classroom, which seemingly symbolizes the off-putting atmosphere of their school. Yeon Si Eun, who was once a voluntary outsider with no interests aside from his studies, looks determined as he stares directly in front of him. Behind him are Su Ho and Bum Seok who appear just as determined. The caption reads, “Rather than win, I wanted to protect.” 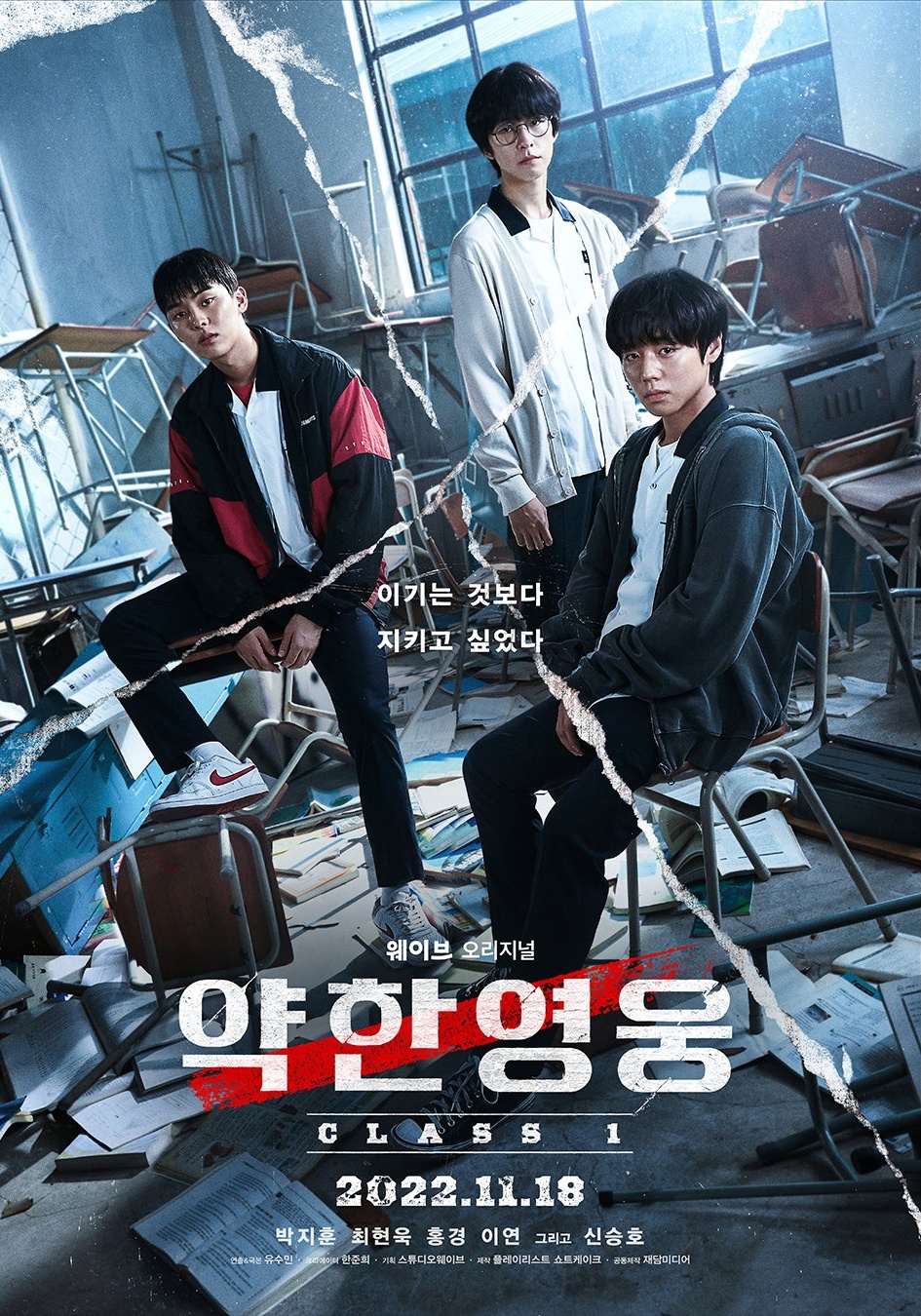 The tense vibe of the poster encapsulates the thoughts and concerns these bullied students are faced with, as well as the calm before the storm as they finally prepare to fight back. Additionally, the poster appears torn up and put back together, which depicts how the road to friendship is not an easy one for this trio.

“Weak Hero Class 1” has also released an intense new teaser that details the abuse suffered by top student Yeon Si Eun. Although he minds his own business and only focuses on getting good grades, he’s tormented by his classmate Jeon Young Bin (Kim Su Gyeom) who tells him, “You’re especially a snob.”

Despite the violence he endures, Yeon Si Eun calmly states, “Let’s stop. Please.” Jeon Young Bin replies, “But I don’t want to?” which causes a spiral in Yeon Si Eun’s reaction. Yeon Si Eun startles his classmates by randomly and repeatedly slapping himself as the teaser caption reads, “Is only what we learned, what is right?”

Yeon Si Eun eventually teams up with his classmates Su Ho and Bum Seok who help attack his bullies, but the abuse heads in an unexpected direction. The trio gets tied up in something larger as their abusers’ boss comments, “Bring the settlement money. I’ll give you three days.” He then threatens, “And if you don’t bring the money by then?”

At the start of their intense fight, Beom Seok worries, “What are you going to do if something happens to Su Ho?” However, he eventually does a complete switch as he angrily comments about Su Ho, “From the start, that bastard has never thought of me as a friend.”

“Weak Hero Class 1” will be released through wavve on November 18. Check out another teaser for the drama here!

Until then, watch Park Ji Hoon and Kim Su Gyeom in “Love Revolution” below!