An official poster and chilling new trailer for the original thriller series “Connect” are now here!

The upcoming original Disney+ series “Connect” is a drama based on a webtoon of the same name that tells the story of a new race with an immortal body known as “Connect.” Connect Dong Soo (Jung Hae In) gets kidnapped by organ hunters and loses one of his eyes. Later, he finds out that his lost eye has been transplanted to a serial killer who caused a massive uproar in Korea and starts to chase after him.

The main poster features Dong Soo at its center, who looks at the camera with a piercing gaze. The notorious serial killer Jin Seop (Go Kyung Pyo) overlaps with Dong Soo, his own eyes cold and calculating, the two’s eventual confrontation inevitable. Dong Soo’s helper Lee Rang (Kim Hye Joon), someone who knows the secrets of the Connect, is also present, the three of them connected by red tentacles that make for a truly creepy and mysterious visual.

The words, “Whatever he sees, I see too,” add to the ominous and dark atmosphere, hinting at how Dong Soo is able to see what Jin Seop sees through the eye that was taken from him, making viewers even more curious about the world that is being built in this series. 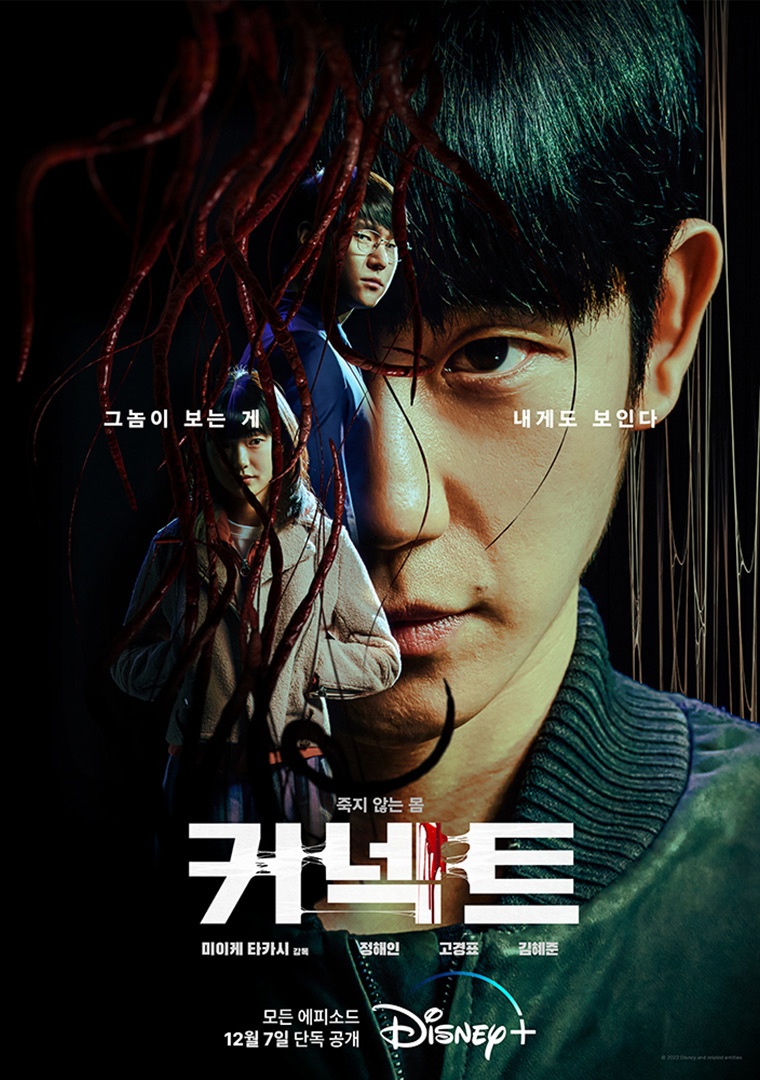 Meanwhile, the tension increases ten-fold with the release of the official trailer, depicting the pursuit of Connect Dong Soo by serial killer Jin Seop. Viewers can witness the horror of JIn Seop decorating the bodies of the ones he has murdered like pieces of art as well as the mysterious phenomenon of Dong Soo being able to see through the eye he had lost. There is then the mysterious Lee Rang who appears before Dong Soo full of secrets. This is all tied off with scenes of them being pursued by the police and the organ trafficking organization, giving viewers just a taste of the thrill to come.

“Connect” will premiere this December on Disney+.

Until then, watch Jung Hae In in “While You Were Sleeping”: