Song Joong Ki’s versatility and boyish charm are often discussed in the same breath – he is a scene stealer who has not restricted himself to genres, choosing stories and characters which have showcased his varied repertoire as a performer. He was a fearless and charismatic captain in “Descendants of the Sun,” an innocent medical student who takes a fall for love in “The Innocent Man,” and the suave, calculating mafia consigliere in “Vincenzo.”

Back on the small screen with fantasy drama “Reborn Rich,” which continues to create buzz and dominate ratings, Song Joong Ki once again proves his status as one of the most bankable stars. Playing Yoon Hyun Woo, the faithful secretary to an influential conglomerate family, he is treacherously killed after being wrongly framed for embezzlement. Hyun Woo is reborn as the family’s youngest son Jin Do Joon and calculatingly plots his revenge and uncovers secrets on the way. As a method actor, Song Joong Ki’s innate ability to make reel look real is once again reaffirmed as he gets his character and the drama’s tone perfectly with skillful ease.

So let’s rewind back and revisit five Song Joong Ki K-dramas which showcase his versatility as a scene-stealing actor! 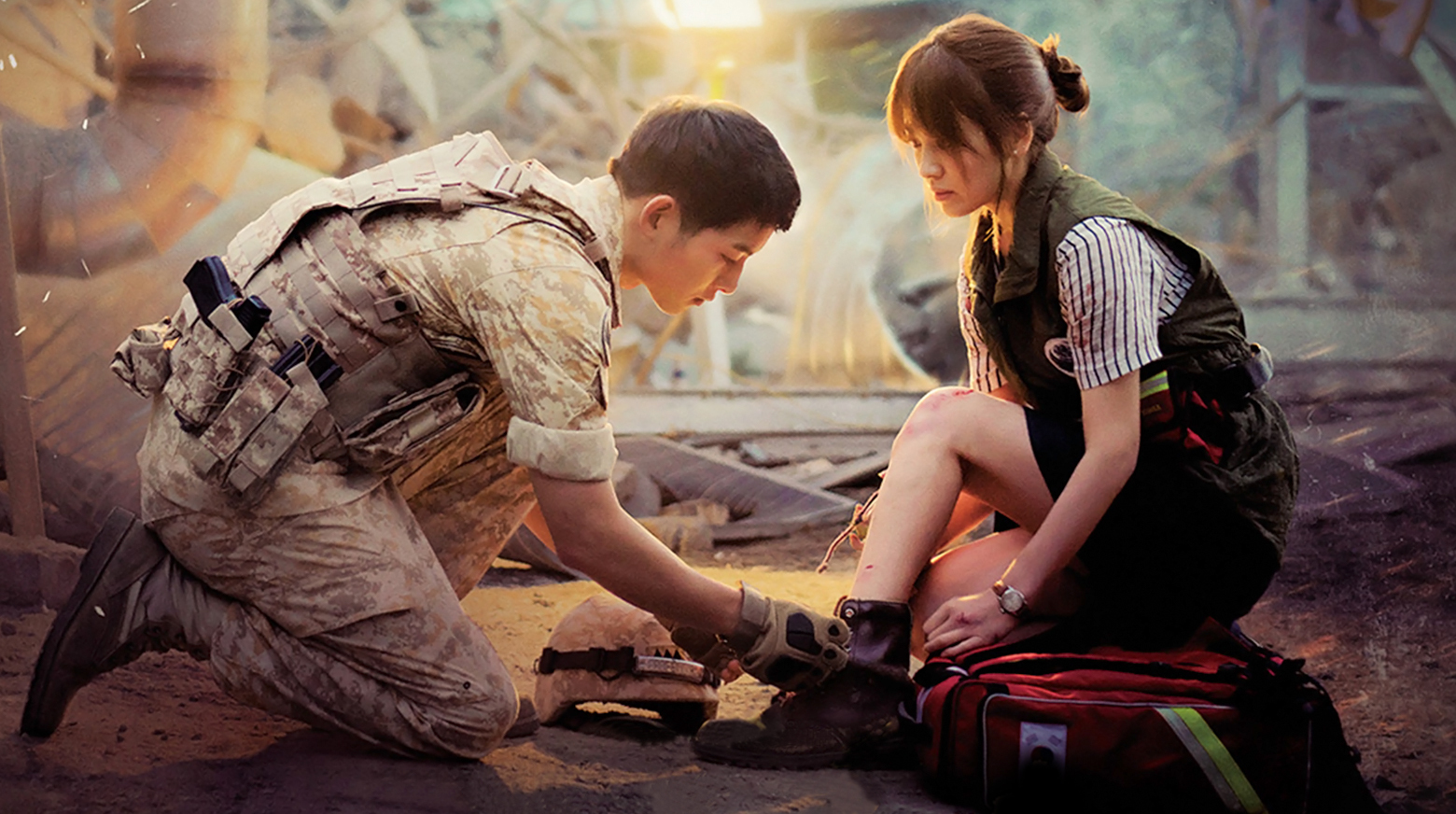 Featuring a star-crossed relationship between a soldier and a surgeon, “Descendants of the Sun” remains an all-time favorite of many, and it has a lot to do with Song Joong Ki playing captain Yoo Shi Jin aka “Big Boss,” the leader of the special task team Alpha. Yoo Shi Jin is the ultimate poster boy of cool. He has swag and is a maverick, quick-thinking, and gallant soldier with a strong bro code. He is a formidable adversary and a true comrade. Plus Yoo Shi Jin and Seo Dae Young’s (Jin Goo‘s) bromance is one of the best. If they aren’t ready to take a fall for other, the boys can be pranksters using their wit and magnetism to get out of sticky situations.

Yoo Shi Jin is a romantic at heart as he sweeps Dr. Kang Mo Yeon (Song Hye Kyo) with his irresistible charm despite her being weary of the dangerous nature of his job. There’s an endearing moment when Mo Yeon asks him to pick his priority between Korea and her, to which he simply answers that she is his priority while Korea trusts him. He is a man who can take a bullet for love and also sacrifice himself in the line of duty!

Song Joong Ki brings out the many facets of Yoo Shi Jin with dexterity. He’s a stoic officer who shows his human side when he breaks down after he takes on his one time ally-turned-foe, Daniel Spencer (Jasper Cho). He’s also a man who defies protocol to save a life and a sensitive lover who honors his girlfriend and her decisions. Now if this is not a perfect man, then who is ? 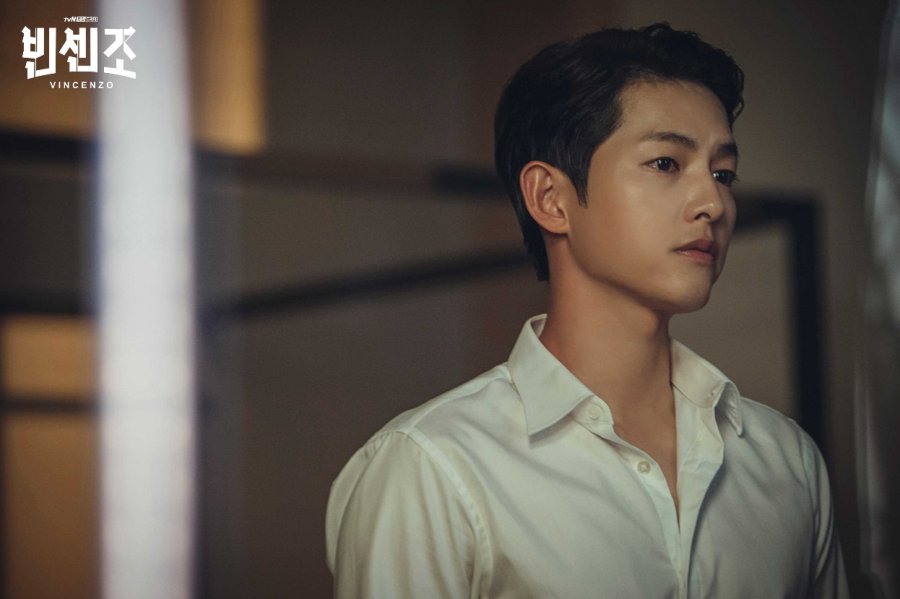 “What is an apostle of justice? I am just trash that’s taking out other trash. I can’t stand the trash that smells worse than me.” Meet Vincenzo Cassano, the suave, shrewd, and scheming consigliere, whose innocent boyish face masks the harsh reality of his crafty ways.

Song Joong Ki plays Vincenzo, who embraces his villainy with panache. He is a smooth operator who manipulates and turns anyone into a pawn in his game plans. But things don’t always go as planned, and he turns into a vigilante for a ragtag bunch of tenants headed by lawyer Hong Cha Young (Jeon Yeo Been), bringing down a corrupt conglomerate headed by the dangerous and psychotic Jang Joon Woo (Taecyeon).

Playing a man averse to showing any emotion and remorse, the only giveaway of his wrath is a slight frown and him flicking his lighter, which is his trademark style before and after a dangerous mission. You sure don’t want to mess with him. But Song Joong Ki gives you glimpses into Vincenzo’s shrouded, gentle side, be it through the reunion with his biological mother, seeking comfort in the warmth of a bunggeoppang (fish-shaped pastry), befriending a pigeon, or through feeling the first stirrings of love. Vincenzo is not trying to redeem himself – he is just a man who shows his many characteristics: the good, the bad, and the ugly, depending on which side you find yourself in. And Song Joong Ki brilliantly portrays Vincenzo Cassano with a go for gold performance that if you find yourself rooting for him, I can’t blame you. 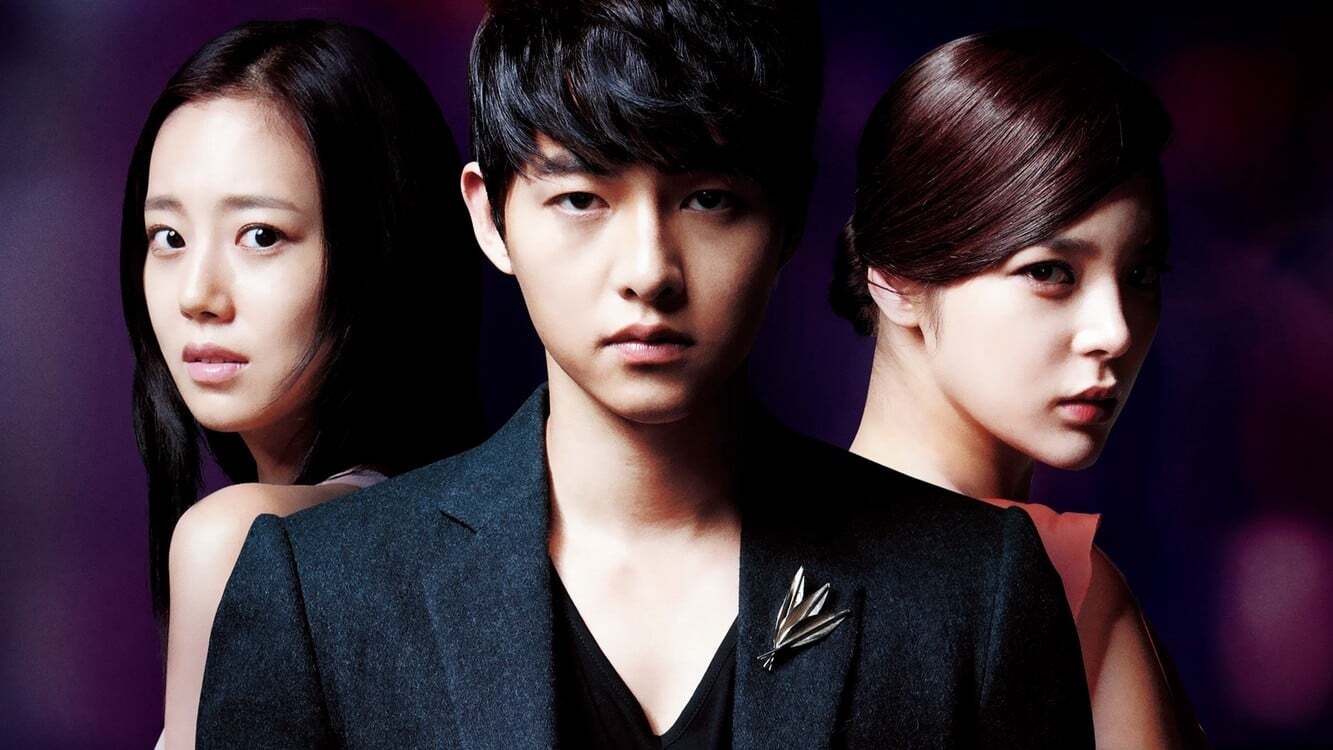 As a bright and easy-going medical intern, Kang Ma Ru (Song Joong Ki) takes the fall for his girlfriend Jae Hee (Park Si Yeon) in an incident which turns his life upside down. Betrayed by the woman he loved and his dreams crushed, Ma Ru is on the path of self destruction, living life as a gigolo bartender and a swindler. However, when he meets Eun Gi (Moon Chae Won), who is connected to Jae Hee, Ma Ru finds the perfect bait to exact his revenge on his former girlfriend.

Song Joong Ki arrests you with his emotive performance in “The Innocent Man,” which brings out the many complexities and attributes of Kang Ma Ru. His eyes are the glasshouse which bring out Ma Ru’s vulnerability and anguish on one hand and his steely and dispassionate gaze on the other, which is devoid of any feelings and warmth. Though “The Innocent Man” seems a bit stretched in some parts, Song Joong Ki as the tormented Kang Ma Ru is so convincing that you will find yourself sucked into his angst and heartbreak and cheer him on. 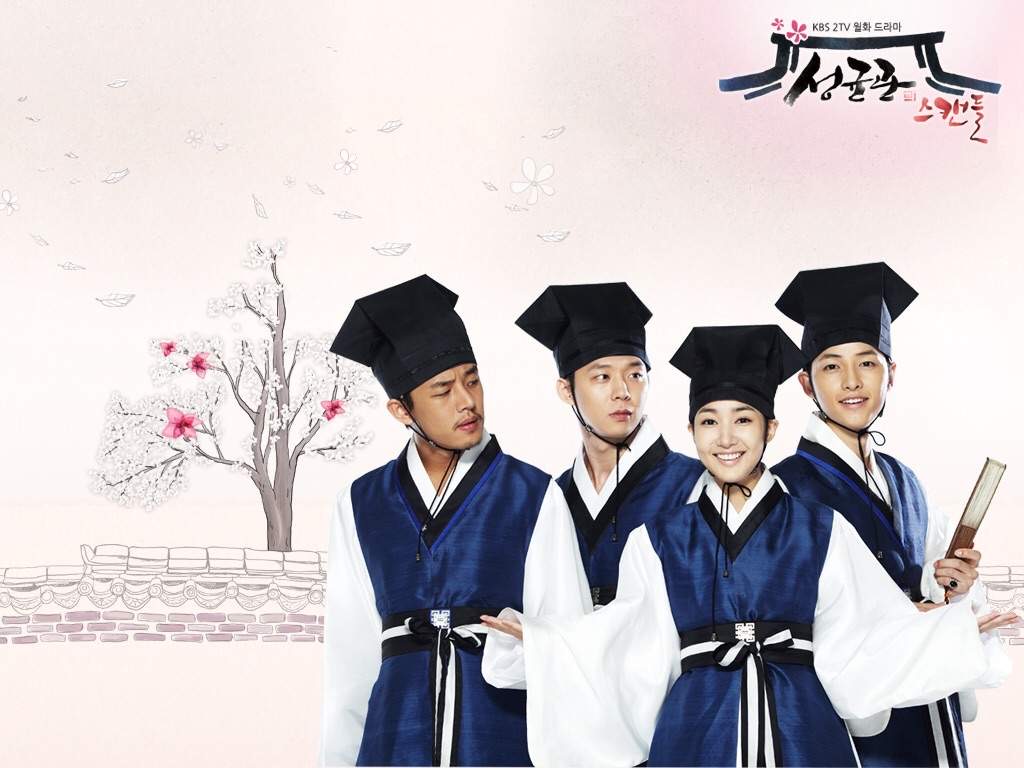 A back-to-school, gender-bender drama set in the Joseon period, “Sungkyunkwan Scandal” is special in many ways since it became a breakthrough drama for many of its actors including Song Joong Ki. Kim Yoon Hee (Park Min Young) masquerades as a young man to earn her keep as a book transcriber. She even helps young noblemen pass their exam at Sungkyunkwan University where she also enrolls to study. The only glitch is that it’s out of bounds for women. Here begins her tryst with a series of misadventures that includes three young men played by Park Yoochun, Yoo Ah In, and Song Joong Ki.

Song Joong Ki as Goo Yong Ha is a spoilt, flirtatious, and infuriating troublemaker, and the 2010 drama was indeed a showcase of the actor’s range which was waiting to be discovered. His so-called “womanizer” character is bratty and devilishly playful, leaving you exasperated and captivated at the same time. He is effortless and excels in comedy, a genre that many find tough. Though he isn’t the main lead in this drama, he proves that he is a thorough entertainer in this role. 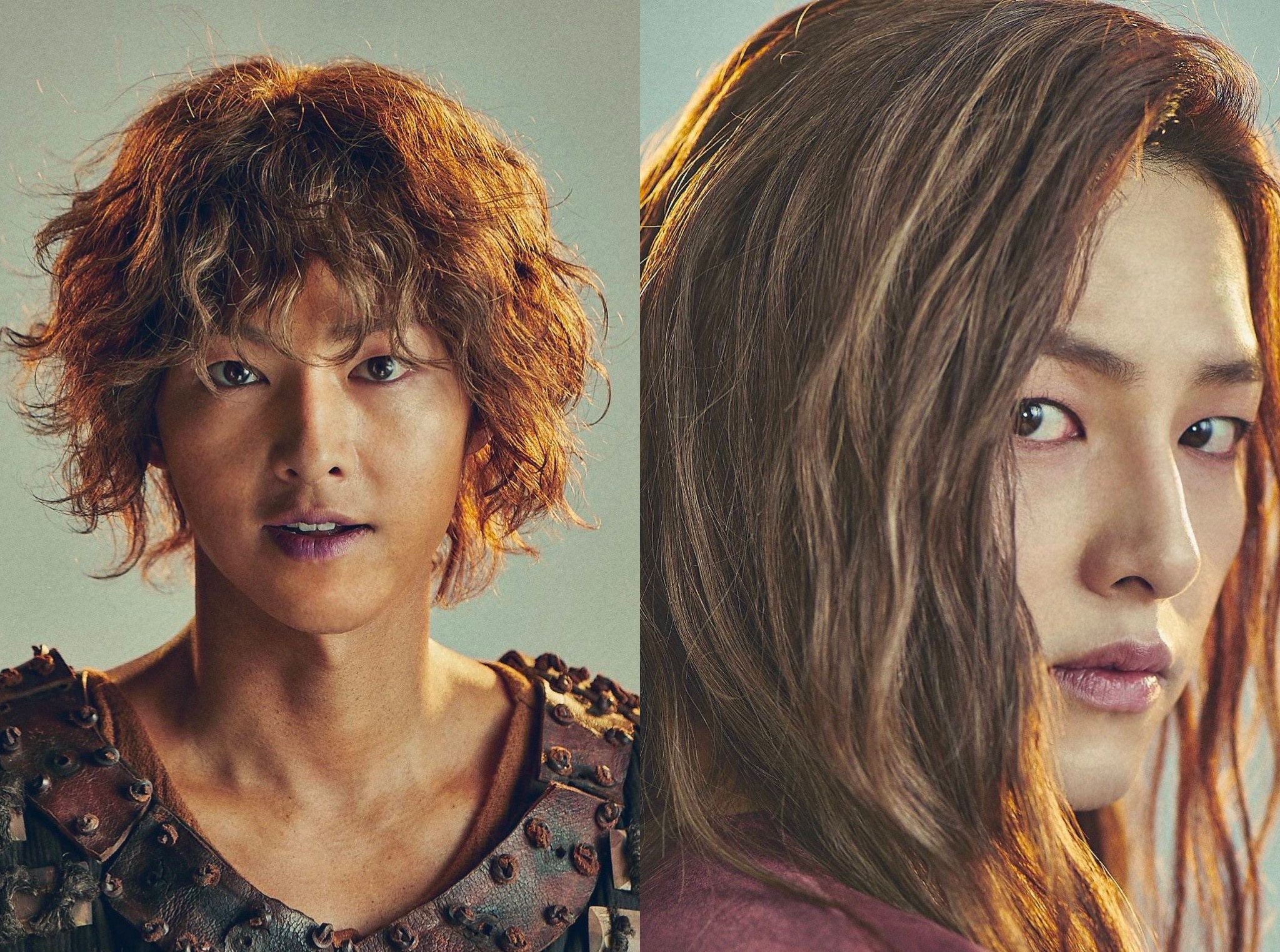 What’s better than one Song Joong Ki? Two Song Joong Kis! It’s one of the primary reasons to watch this show, which incorporates a genre not earlier explored in K-dramaworld. In “Arthdal Chronicles,” “Avatar” meets “Game of Thrones” for a visually captivating and engaging fantastical drama on the struggle for power, palace intrigues, prophecies, and mysticism. Set in the Bronze Age in the mythical land of Arth, weak indigenous tribes are trafficked by the strong and powerful ones who conquer their land and torture their people. Song Joong Ki stars in a double role as Eun Seom and Saya, long-lost identical twin brothers – one is a commoner, and the other a royal. Eun Seom is a brave heart and free spirit who has suffered a life of hardship, but he champions the cause of his people and protects the woman he loves. Saya, on the other hand, grew up lonely despite the riches and is cold and not averse to violence and cruelty.

The actor masterfully portrays the dichotomy of his two characters. There’s the breathtakingly beautiful Saya in his royal robes, who emanates a crafty and impersonal vibe, while Eun Seom, raw and rugged in his rustic appeal, is all heart. As always, the multi hyphenated Song Joong Ki manages to cast his spell with this drama, sweeping you into his myriad color drama verse.

Hey Soompiers, which is your favorite Song Joong Ki drama and character out of these? Let me know in the comments below.

Puja Talwar is a Soompi writer with a strong Song Joong Ki and Lee Jun Ho bias. A long time K-drama fan, she loves devising alternate scenarios to the narratives. She has interviewed Lee Min Ho, Gong Yoo, and Ji Chang Wook to name a few. You can follow her on @puja_talwar7 on Instagram.