NewJeans has swept the Korean music charts with their latest hit!

On December 25 at 10:30 a.m. KST, Instiz’s iChart officially announced that NewJeans’ new pre-release single “Ditto” had scored a certified all-kill, making it the rookie girl group’s first song ever to achieve the feat.

A certified all-kill is awarded to songs that are No. 1 on the daily and Top 100 charts of Melon, the daily and realtime charts of Genie and Bugs, YouTube Music’s Top Songs chart, VIBE’s daily chart, and the realtime charts of FLO and iChart. It remains to be seen whether “Ditto” will also achieve a perfect all-kill, which requires topping iChart’s weekly chart as well. 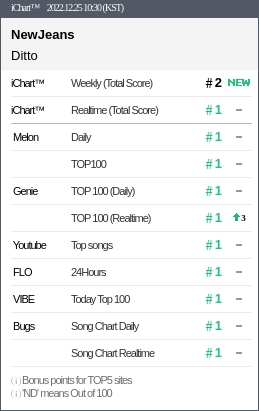 Watch NewJeans in their variety show “NewJeans Code in Busan” with English subtitles below: