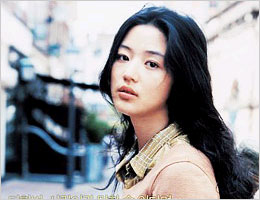 The only way for a romantic tearjerker with an obvious storyline to avoid failure is to put as much emphasis as possible on the adorable couple. If people just can’t keep their eyes off the gorgeous hunk and the stunning girl, no matter how jealous they may be of either, and if on top of that the weak old plot cranks along against breathtaking scenery and is set to lush music, it may well succeed in bypassing the brain altogether by appealing to audiences’ eyes, ears and gut.

"Daisy" is a castle built on just such sandy ground. With Jun Ji-hyun and Jung Woo-sung, Korea’s best looking TV commercial couple, as a safety net and the picturesque canals of Amsterdam as a setting, Hong Kong director Andy Lau, who showed his stuff in "Infernal Affairs," has cooked up a light melodrama with a touch of Noir. The connotations of the daisy — it stands for "loyal love" — are both the subtitle and theme of a film told from three points of view.

Hye-young (Jun Ji-hyun) makes a kind of living drawing portraits in a tourist square. She has no friends or family here, and the only thing that keeps her going is the daisies a man leaves at her doorstep every day. She lives each day in the expectation of meeting him. Then one day, Lee Seong-jae comes up to her in the square carrying a pot of daisies…" 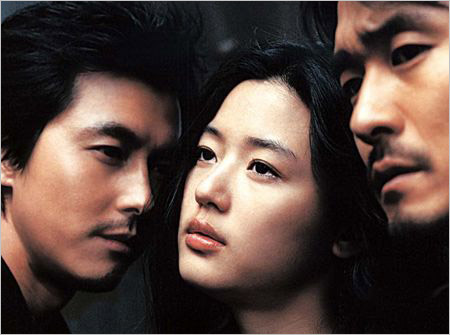 Jung Woo-sung is a gangster with a heart who loves the girl but can’t have her because she would be in danger if the gang found out, so he just leaves the flowers at her doorstep day after day. And now there’s another man in her life, who she believes left all those daisies for her.

Lee Seong-jae is an Interpol agent hot on the trail of a drug-smuggling ring. He only asked the girl to draw his portrait to hide in the crowd, but on account of the daisies she mistook him for the man she’d been waiting for.

Isn’t coincidence the damndest thing? Jung is ordered to kill Lee, partly because he’s a threat to the gang and partly because there has to be a showdown between the two men in Jun Ji-hyun’s life. The duel between the two brings back fond memories of Andy Lau and Tony Leung battling it out in "Infernal Affairs," though "Daisy" focuses more on the thwarted romance between gangster and portrait artist rather than the twist of fate pitting two men against each other, so subtle psychological nuances take a back seat.

Since "Daisy" is a pan-Asian production hoping to cash in on Jun Ji-hyun’s soaring popularity with a script by Kwak Jae-yong, comparison with Kwak’s 2004 runaway hit "My Sassy Girl," which also starred Jun, is inevitable. Here too, lingering close-ups of Jun Ji-hyun’s clear complexion and silky hair are much in evidence. But director Lau avoids making "Daisy" look too obviously like a vehicle for its female lead, giving Jung Woo-sung’s character a lot more weight than his equivalent played by Jang Hyuk in the earlier film. The presence of Jung, who became hugely popular in Japan with "A Moment to Remember," is sure to give the movie some momentum in countries affected by the Korean Wave.

A puzzle for movie buffs: why did Andy Lau decide to call off shooting "The Flock" with Richard Gere and Claire Danes in favor of this one? “Daisy” went on release in Korea on March 9.