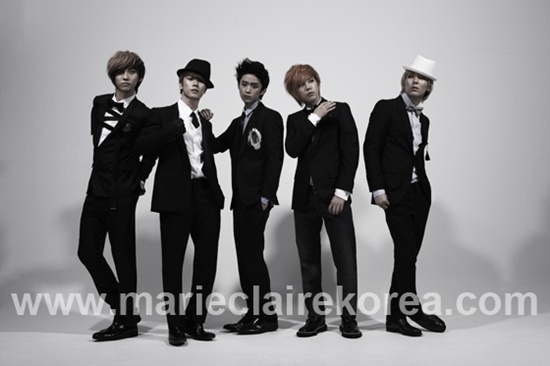 Artist of the week – FT Island

BIOGRAPHY
F.T. Island, short for “Five Treasure Island,” is a rock band made up of 5 young, fresh-faced members. Only been debuted three years, they have already gained fans at home and abroad. “Cheerful Sensibility,” their first album released on 2007 is a collection of rock ballads and pop-rock tracks. Their first 2 hits “Painful Love” and “Thunder” all went to the top of the chart, making them the most successful rookie group of that year.

Their 2nd album and a mini-album released last year also generated hits after hits. In addition, they also sang the title song of popular drama “On Air”, gaining more fans each day. They also have went abroad to Japan to release few singles and already held two concerts in Tokyo. In January 2009, Oh Wonbin left FT Island and was replaced by Song Seunghyun as second vocalist and rapper.

With a new line-up they released the third album titled “Cross And Change.” Just like their title name states, FT Island has come with a transformation as well as a crossover. If their previous albums mainly consisted of rock ballads, this new one would have more summery bright and cheerful songs. “I Hope” is of the electronic rock crossover genre that has a strong melody as well as rapping.

This year, FT Island has been working on their 1st Asian tour. They’ve held a showcase in Singapore at the end of June (which 900 fans attended), done a few day promotions in Thailand in July and during the later half of this year should be holding showcases in Hong Kong and Taiwan.

PURCHASE THIS ALBUM
* Cheerful Sensibility (1st album, 2007-06-08) : Love Sick, I Am Happy, Thunder, Only One Person, Cling, A Man’s First Love Follows Him To The Grave, They Sait To Stop, FT Island, Reo Reo, Prima Donna, Meeting, Because I Don’t Know How To Love, First Kiss